A Sci-Fi SimCity Is Exactly What I’ve Needed 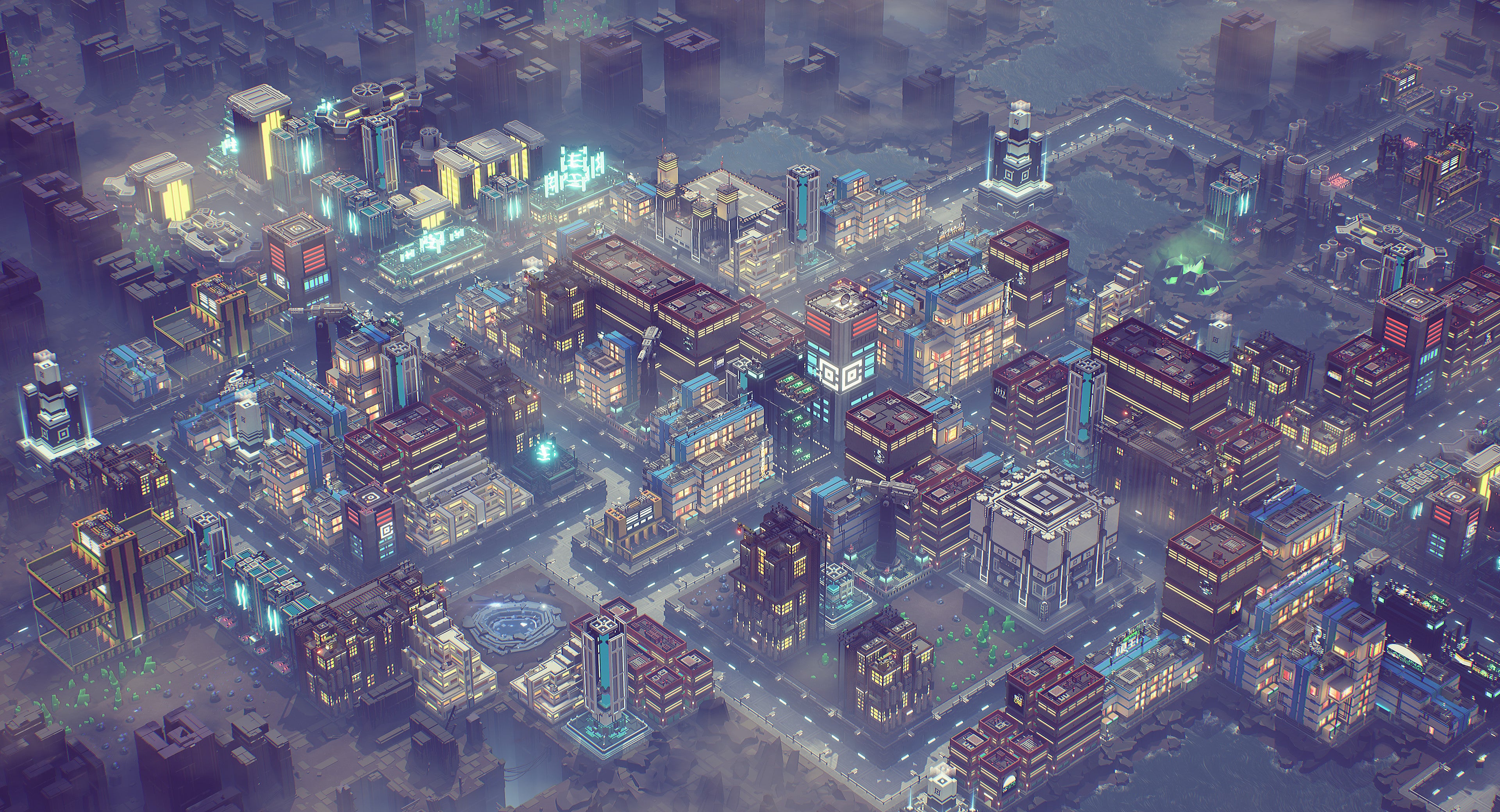 A lot of people’s response to the pressures of all of this has been to retreat to the sunny skies and green pastures of Animal Crossing. Which is fine to a point, but after too long I find myself getting a little tired of the idealism, and start craving something a little dirtier, a little more dystopian, but still divorced enough from our modern world that it doesn’t get a bit much.

It’s a city-building game set on Saturn’s moon Titan, and is a grim exercise in space pioneering, as you try and carve out a functional outpost on the surface of a hostile, alien world that also happens to be covered in ancient ruins.

Actually, it’s grim in setting but not in execution; despite putting you in direct control of some ghastly stuff, like scraping the guts out of your human colonists and turning them into ceaselessly-working automatons, it’s actually a surprisingly cute game? There’s a Crossy Road aesthetic to your little workers and space buildings, and all your advisers are light-hearted characters straight out of a Westwood RTS.

Industries of Titan doesn’t play like a standard city-builder. Rather than being given a huge green expanse to go wild on, you’re instead nestled amongst a sea of ancient ruins, and have to slowly expand your settlement’s reach by exploring (you can salvage materials and artefacts from their depths) and then knocking these down. It’s a slow and plodding approach that makes your early expansion more a matter of elegant building placement rather than broad, creative brushstrokes.

What’s really neat about this game, though, is that it takes place on two planes. There’s a larger city view, where you drop entire buildings, and that’s fairly expected. But there’s also the ability to go inside larger buildings and construct specific equipment and facilities. 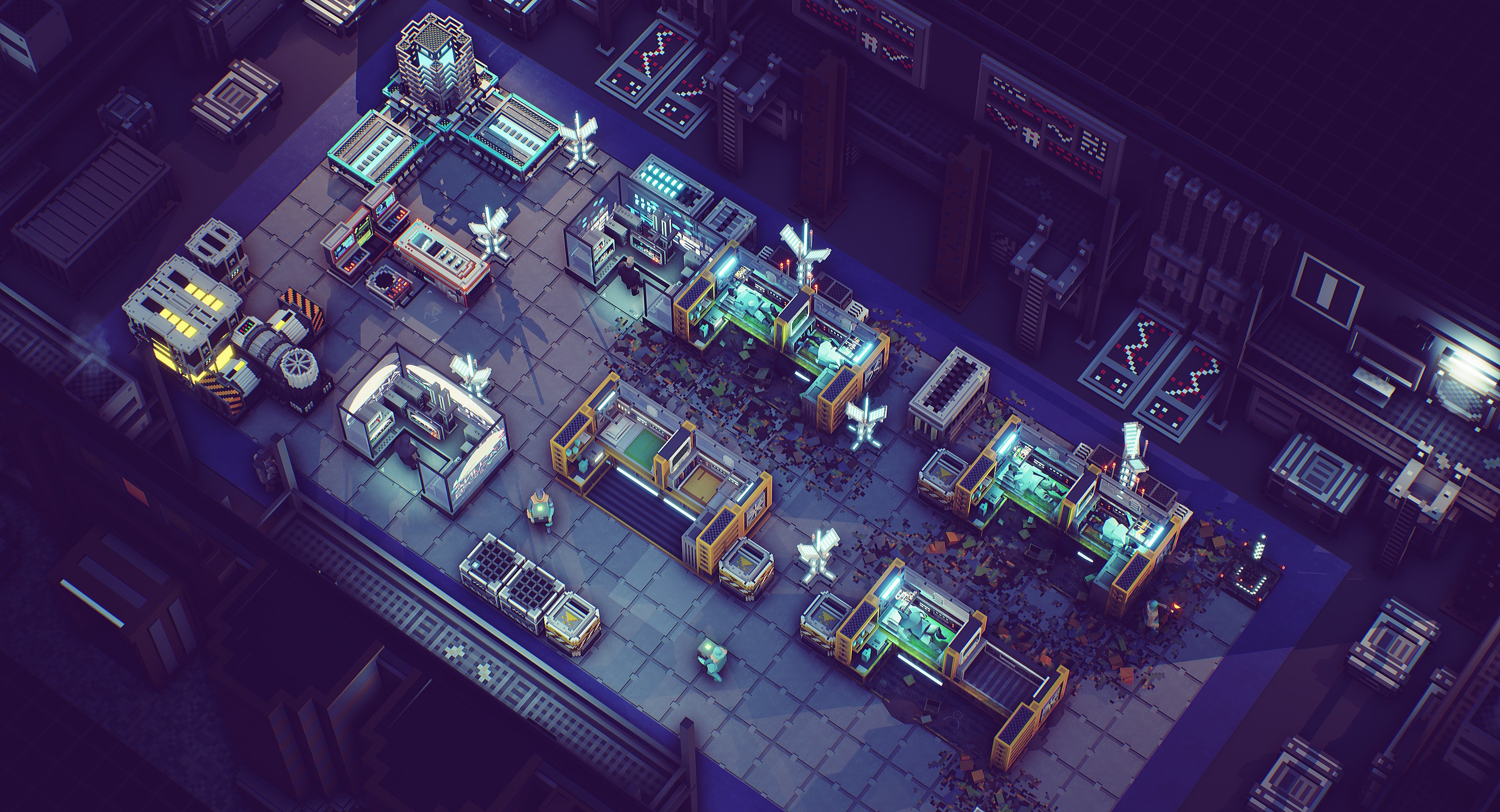 The interior view of one of your buildings, showing the Tetris-like arrangement of equipment and workstations.

This gives you an incredibly granular level of control over your colony, as if Maxis had somehow found a way to combine both The Sims and SimCity in one game. Inside buildings you can construct beds, storage facilities, small generators and workstations for your colony’s employees, all of it having to be laid out like a game of Tetris since you’ve only got a finite amount of floorspace and every object has different, weird shapes.

What you build inside is linked to what you can build and do outside, too, tying these two levels of the game together. While it’s a little confusing at first, it soon starts to make a weird kind of space exploration-y sense: this isn’t Earth, it’s a planet where the air itself is poison, so of course a lot of your city’s functionality is going to be taking place inside, rather than being strewn across the map.

There’s more here than just building, too; sent to the surface to build a colony in the name of a future space company, you’ll be battling other companies once on the ground, along with rebel insurgents as well. And while it’s not in this Early Access build yet, there’s also custom ship creation and even ship-to-ship combat, ala FTL, coming soon. 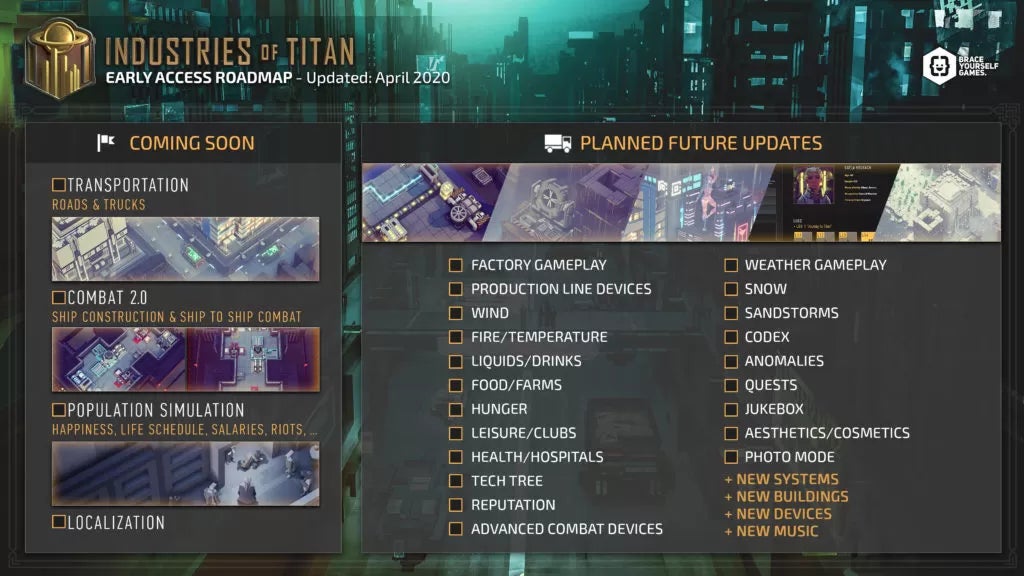 When you start the game, you’re presented with this early access roadmap showing that...well, tons of stuff isn’t in the game yet.

There’s a lot missing from what’s currently playable of Industries of Titan, but what I have been able to play has been one of the most original and daring takes on city-building I’ve ever seen. I’m super excited to see what it’s like when weather, tech, food, trucks and population happiness gets thrown into the mix down the line.