It’s 1997, and I’m sitting in my dorm room at the University of Wisconsin playing the newly-released Final Fantasy VII on my recently purchased PlayStation. Tifa is in the clutches of some slumlord jerk named Corneo and it’s my job, as Cloud, to save her. How do I do it? Putting on a dress.

Putting Cloud in a dress in Wall Market is probably one of the more memorable and weird segments of FFVII’s early hours in Midgar. With the original game being over twenty years old, this scene dates back to a time when queerness occupied a very different place in mass culture. Looking at it through 2020 eyes, that section of the game has not aged well. To fool Don Corneo, Cloud gets done up in drag at Aerith’s insistence. Making that happen means wandering Wall Market itself to collect the trappings of his new drag persona: a dress, a tiara, perfume, a wig, and some sexy underwear.

Getting these things is a series of small tasks, and two of them involve some old and questionable depictions of queerness. The wig comes from a gym owner in drag who has a right hook that can take out a man at twenty paces. The underwear comes from the local brothel/club/what-have-you, the Honeybee Inn. To get the “best” underwear, Cloud effectively has to bathe with a gaggle of moustached bodybuilders who are clad only in briefs, including their Freddie Mercury lookalike leader Mukki. The entire thing effectively plays on the Japanese pop culture tropes of queer masculinity and the actual scene itself is an extended sexual assault joke. Not great.

From the time Final Fantasy VII Remake was announced up to its release last week, many people—particularly queer players—have been wondering just how this section of the game would go down. Director Tetsuya Nomura himself noted in a June 2019 interview with Famitsu that Wall Market needed a “modern arrangement” because doing it the original way would be “uncomfortable.”

That “modern arrangement” is chapter 9 of FFVII Remake, which expands what was a brief sidequest in the original into a long and winding set of events during which Cloud and Aerith need to get the approval of Corneo’s “Trio” to gain entry. One member of the trio is the new Honeybee Inn’s owner, Andrea Rhodea. The result turns what was previously a wandering search for outfit components into what now amounts to an interactive musical number complete with rhythm game. Cloud has to vogue on stage to hologram laser lighting and synth-pop to convince Rhodea to give him a drag makeover.

Compared to the original’s homophobic sexual assault joke, the new Honeybee Inn segment is exactly what Nomura said: a modern take that recognises that in the culture of 2020, the old version wouldn’t fly. Instead of a series of jokes at both Cloud and queer people’s expense, the new segment seems to almost self-consciously court queer players. The Honeybee Inn now has a perfectly groomed male receptionist who has what I can only call “a really gay voice” (and I’m speaking from experience on that one). Rather than just girls in honeybee outfits, Rhodea’s Honeybee Inn also has “honeyboys:” top hat-wearing twinks in tuxedos. There’s every indication that this new version of the club is built to appeal to various gender and sexuality permutations.

Then there’s the dance and rhythm game scene itself: Cloud and Andrea take the stage together and perform to a very archetypal club dance song. This floor show (thanks, Rocky Horror) starts with a song that has some telling lyrics:

Life can be hard, it can be bitter, but we can make it oh so sweet.

Here at the Honeybee Inn every moment is a treat!

Step up and cast your fears aside!

Stand up and bare your soul with pride.

This is late 1990s to early 2010s gay pop anthem in a nutshell—everything from the techno instrumentation to the lyrics and even the dance moves Cloud does on screen are callbacks to Madonna music videos, to songs like Lady Gaga’s “Born This Way” and Kylie Minogue’s entire discography. The lyrics are everything you’d expect from that oeuvre, right down to the exhortation to live with Pride™. It’s gay… but it’s the gay of a decade ago, possibly older.

At the end of the musical number, Cloud is placed on a chair in the centre of the stage, surrounded by dancing girls with fans. A new Honeyboy — with another deeply “gay voice” performance — puts Cloud in drag and finishes his makeup, breathlessly noting Cloud was “born for this.” The pedestal the chair is on rises on stage as Cloud, now in whatever drag outfit the player has earned over their time in Wall Market, steps forward to the loud cheering of the room, including Aerith, who does everything but scream “you go, girl” (I was shocked that she didn’t). Just like the original, the outfit can range from pigtails and a peasant dress to what I got: full on Disney Princess gear complete with tiara. 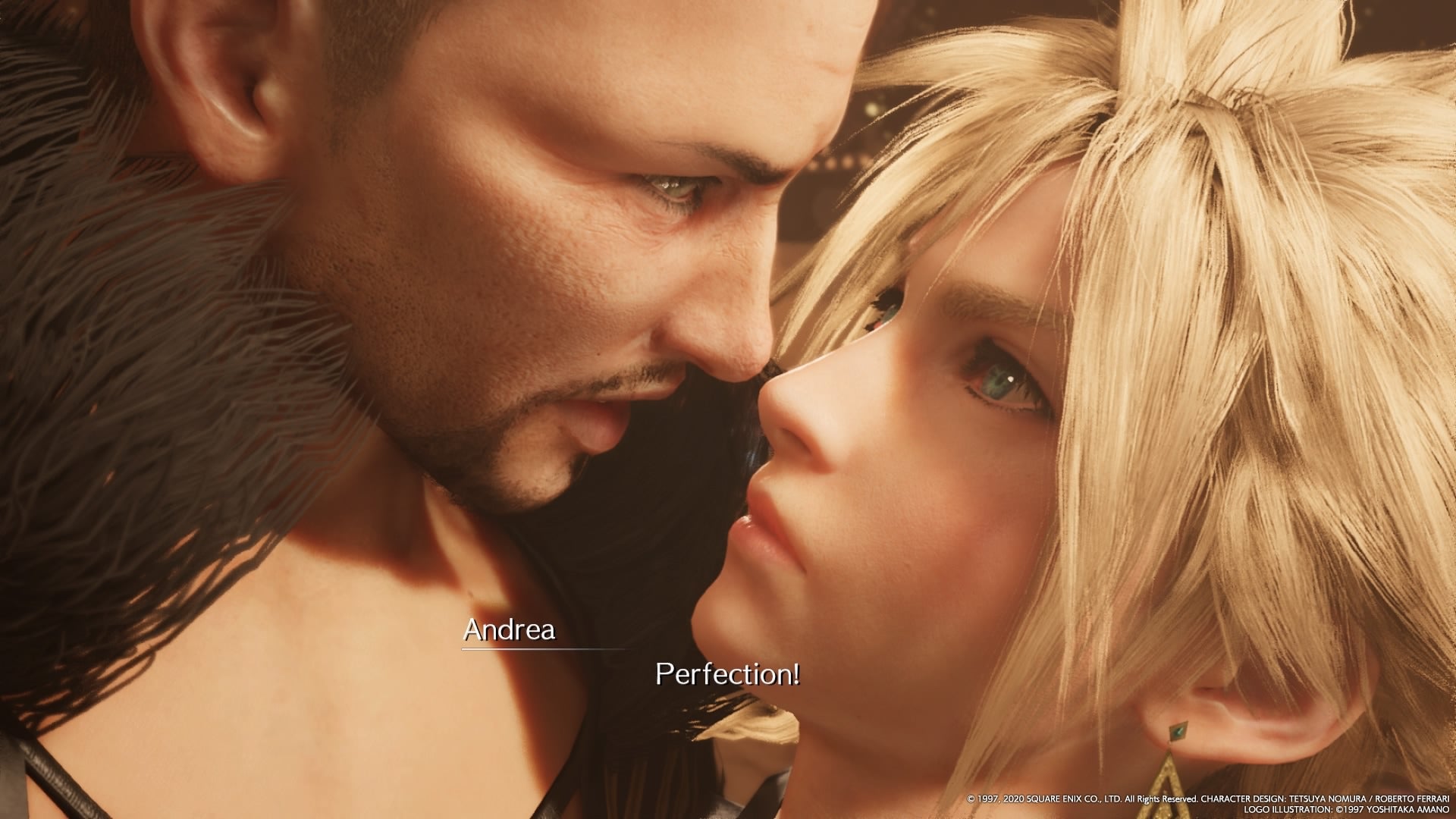 Capping it all off, Andrea Rhodea steps on stage, twirls Cloud, and then dips him, murmuring “Perfection” roughly three inches from Cloud’s face, as if they’re about to kiss. “True beauty is an expression of the heart,” he says, as the scene finishes to more applause. “A thing without shame, to which notions of gender don’t apply. Don’t ever be afraid, Cloud.”

Despite the over-the-top schmaltz, it’s hard not to like it. I’m also a queer person in my early 40s, though, for whom much of these trappings—the club techno, the camp drag, the ostentatiously in-your-face “pride” language—were salient… in my 20s, when the original FFVII was new. What I was struck by was how expected the new scene felt: if I sat and asked myself “how would a straight person in 2020 imagine how a queer experience like this would go?” I am pretty sure the result would be exactly what we got on screen in FFVII Remake.

This new version is like the Will and Grace-ification of the original’s deeply troubling content. Much like the TV show in question, which premiered almost a year to the day after FFVII’s original 1997 release, this version of the Honeybee Inn presents a mass market, straight people-friendly slice of queerness that does no transgressing, no challenging; it is campy fun, drawing on queerness as a colour palette but not going much further.

It would be tempting to say “and that’s why it’s bad,” but it’s not. “Inoffensive in a mass market way” isn’t a crime, and I suspect a lot of queer players likely enjoyed this new version thoroughly. I’m a queer player and I sure did. At the same time, despite all this “be yourself, be proud” language in the lyrics and dialogue, Cloud still seems baffled and even fearful — casting wide-eyed glances at his surroundings and moving with tense, closed body language — about this situation, which is, to be blunt, forced on him by Andrea and Aerith. When the two encounter Tifa later on and she recognises him, a frustrated Cloud tersely says, in perhaps the game’s funniest line of dialogue, “Nailed it, I know. Thank you, moving on.”

I think we need to accept this scene for what it is: colourful and campy and fun, but not much more than that. It’s great that Nomura and company knew this needed to be updated for modern times, but the result was something extremely safe and unchallenging in a world where RuPaul’s Drag Race is a water cooler discussion topic for straight people.

The original Wall Market content was fraught for queer players when it was new, and likely continues to be fraught for them now. Many queer players had meaningful experiences with this bit of the original game, but just as many found it to be homophobic nonsense. It would be easy to say that this new, modern version will be less fraught, but that’s not necessarily true. In 1997, we had to position ourselves relative to a series of transphobic and homophobic jokes that nevertheless sometimes resonated. Now in 2020, we have to ask ourselves what our relationship to “funny but straight-friendly and safe” is instead. In either case, the answers are not clear-cut, but at least this new, less overtly offensive version gives us more space to look for them.

Todd Harper is a professor in the Simulation and Game Design program at the University of Baltimore, as well as a freelance games writer, critic, and speaker. Other accomplishments include making extremely delicious cookies and once getting to tell Jen Hale that yes, she was in Grandia 2.