Westworld Is Confusing Again, But In The Good Way

If you’ve been waiting patiently for Westworld to start messing with your mind again, I’ve got good news and bad news. The good news is there are some deeply mysterious, confusing questions raised in tonight’s episode. The bad news is that I don’t think all of them have answers.

A lot happens in “Genre,” so if you’ve also been waiting for season three to kick into high gear, it’s time to buckle that seatbelt. We get the origin story of Serac (Vincent Cassel) and the civilisation-controlling Rehoboam and peeks at some majorly disturbing hints about Caleb’s past that even he’s surprised by. And, uh, Dolores (Evan Rachel Wood) kind of wrecks the world, a stunningly major development that turns out to be only another step in her ultimate plan.

She does it by finally hacking into Rehoboam through Liam (John Gallagher Jr.), whom she and Caleb (Aaron Paul) nabbed last week. Liam is reluctant to give her his access key, of course, until Serac sends his goons to take out all three of them, and Liam is forced to hand it over so Dolores can hotwire their Rehoboam-controlled rideshare and escape. She also uses it to hack into Rehoboam proper, but the show gives them some other busywork first: Liam sticks Caleb with the party drug Genre, hence the episode title, which makes him see the world through movie genres, although this doesn’t last very long and it doesn’t affect anything! There’s an extremely slow car chase where Dolores has a gun that shoots a missile equipped with a sort of drone to make sure it hits its target. Liam is generally annoying, except when he uses those holo-glasses to read Caleb’s file and enigmatically freak out. Dolores also calls Lena Thwaite and Marshawn Lynch’s criminals-for-hire, Ash and Giggles, from the season premiere to help protect them from Serac’s goons.

Once Dolores has the key, it can only be used to access Rehoboam at “The Node” in InCite HQ—right where Dolores-Connells (Tommy Gallagher) is keeping Bernard. Dolores sends D-Connells the key, D-Connells sends her the file on Serac, and then Dolores sends everybody in the world their Rehoboam files, complete with whether they’re allowed to reproduce and how they will die. Westworld wants this scene to be incredibly powerful, as the people around Dolores and Caleb discover how they’ve been manipulated and how they’ll end up, but it’s undercut when absolutely all of them have increasingly tragic fates—except for the dude who learns his friends call him an arsehole behind his back, which is an absolutely hilarious metric for a world-controlling super-computer to keep track of. 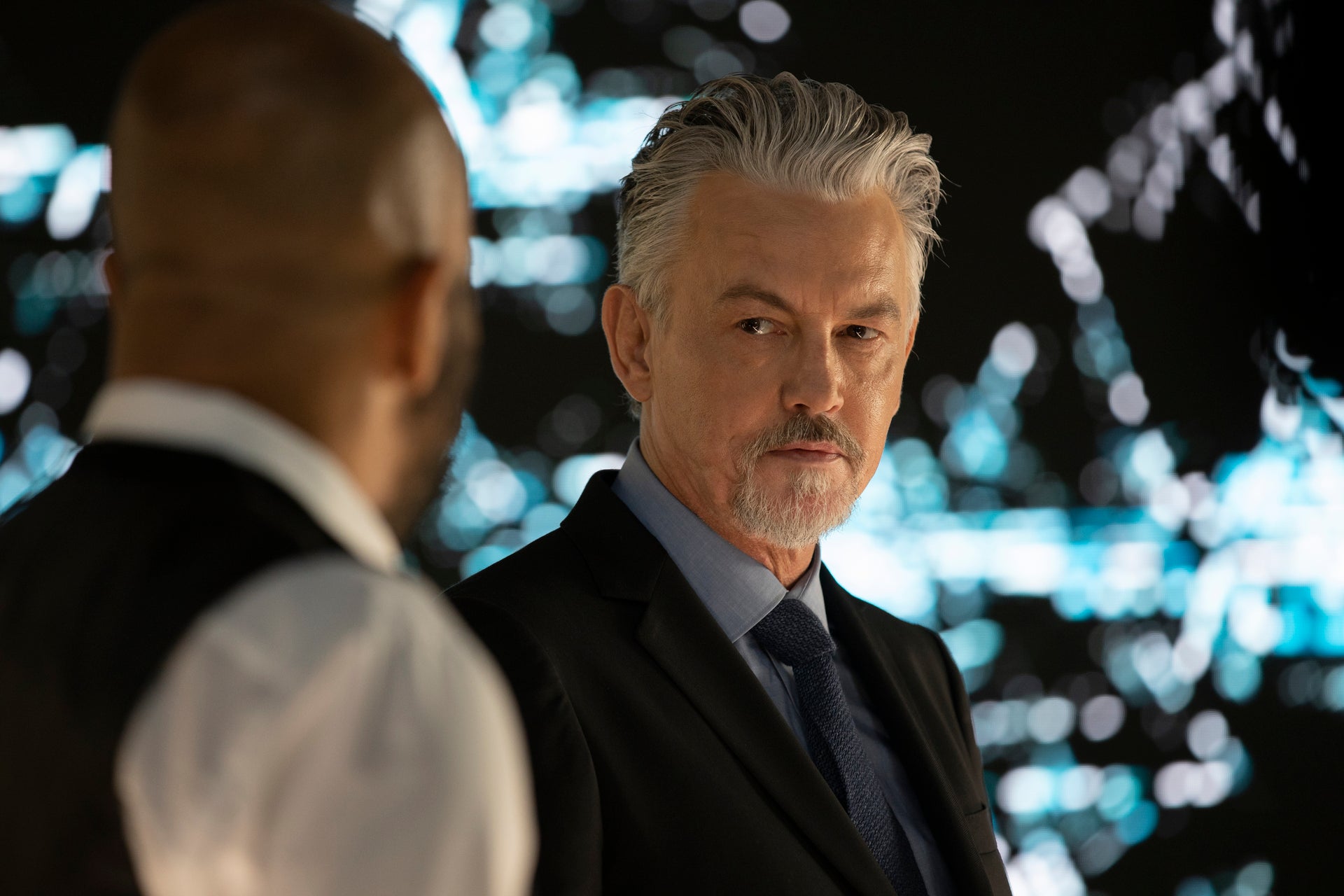 As Dolores and co. walk through L.A., people are either stunned, yelling at each other, getting in fights, or setting cars on fire. Chaos reigns…and then the fact that civilisation has been completely and irrevocably altered doesn’t really come up again. It doesn’t help that it occurs in the middle of the episode, followed by scenes with much lower stakes, while Dolores gives the accomplishment no gravity whatsoever. After a wry smirk, she’s back to business, because revealing Rehoboam’s control and changing the course of human civilisation is just one more thing on her to-do list.

The most interesting thing that happens afterward is at the pier, where Dolores, Caleb, Ash, and Giggles lead Liam to determine his fate. Liam doesn’t need his Rehoboam glasses to know how this is going to play out, and offers a fascinating and utterly chilling idea of how the wealthy, powerful elite see anyone who needs society’s help to exist in any way: Rehoboam isn’t the problem, the poor, sick, and disenfranchised are. “You’re the prison to all of us!” he screams. He’s angry that there are people who have mental health issues, genetic illnesses, need financial support, and who otherwise can’t or won’t contribute to a society where he’s rich and in charge—an appallingly honest philosophy from the 1 per cent. Rehoboam exists to get rid of these people, to free Liam and his ilk’s idea of “humanity.”

So it’s great when Ash just shoots him in the gut, although not before Liam screams at Caleb that’s he’s the worst of “them.” Despite this, Caleb tries to staunch the bleeding, leading to many quick, mysterious flashbacks of his time at war—including leading a tied-up man who has a black bag over his head, a man who turns out to be Veronica Mars’ dad (an always welcome Enrico Colantoni). The cherry on top of the “what the hell happened in Caleb’s past” sundae is Liam’s dying words to him, which are “You did it.” 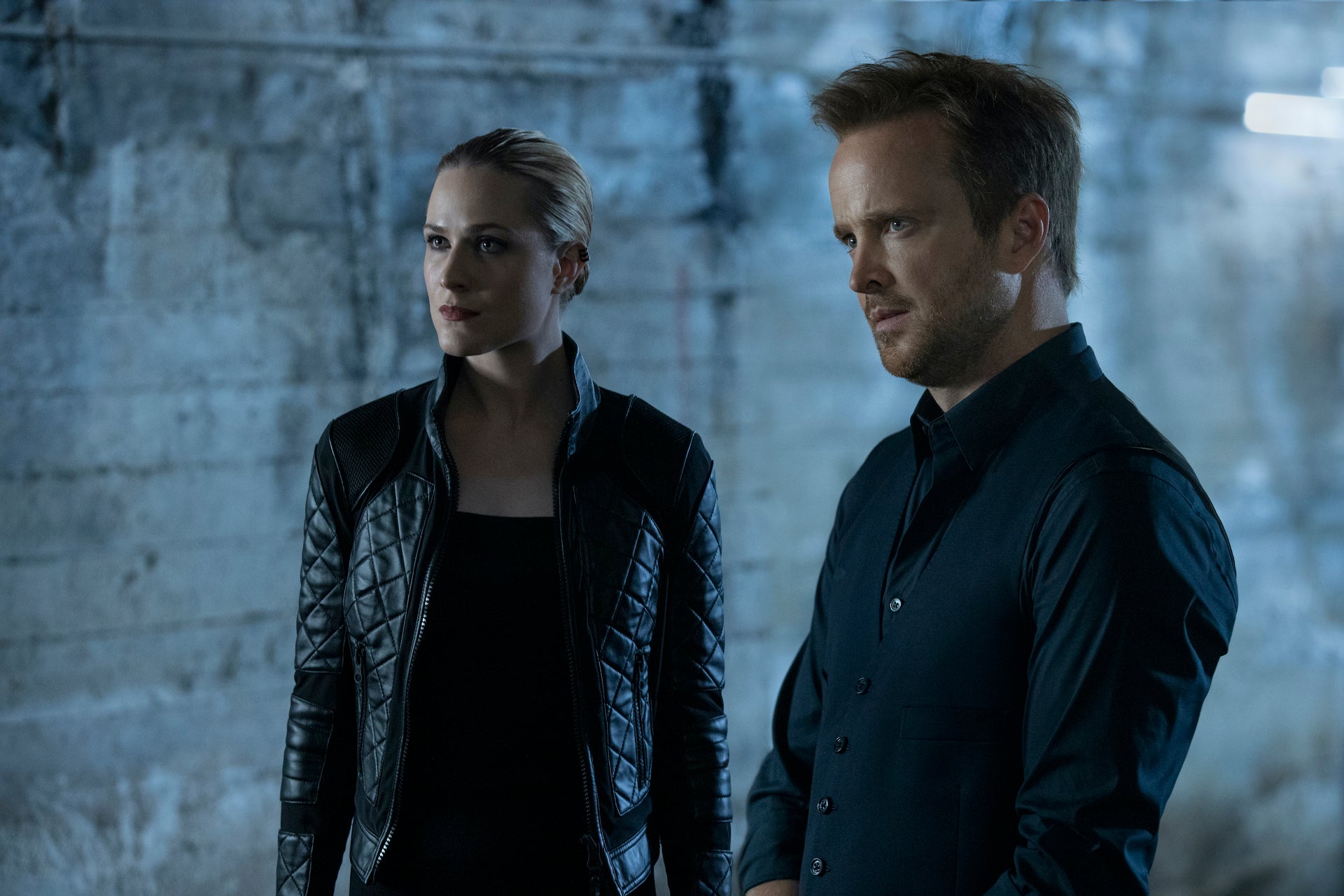 While we only get these mysterious glimpses of Caleb’s past, “Genre” gives Serac a much more thorough origin story. Since he saw Paris get nuked when he was a boy, it’s quite reasonable that he and his brilliant brother wanted to figure out a way to save humanity from itself. As Serac narrates, they got Liam Dempsey Sr. to invest in their supercomputer by showing how it could predict the stock market. While the billionaire was happily making more billions the two brothers “charted a course for the entire human race.” Unfortunately, no matter what course they charted, humanity always ended up destroying itself eventually because of certain people who couldn’t be helped, predicted, or controlled—which includes Serac’s brother, who suffers from his own mental health issues.

Eventually, Dempsey learns that Serac has not only stuck his brother (along with many others) in a mental health care…prison, really, where they can’t affect the society he’s created. Dempsey gets another clue that there may be a problem when Serac says he’s using war as a “wood-chipper” for other “outliers.” When the contrite Dempsey wants out, Serac bashes his head in.

It would be a very straight-forward backstory for the season’s villain, except for three confusing things: 1) Right before killing him, Serac tells Dempsey, “Somewhere in this group is an agitator who will destroy the world.” Who is it? What group? 2) Dempsey felt safe with Serac in his final moments because he used Rehoboam to confirm Serac wouldn’t harm him. But Serac informs him there are tiny moments—a “bubble of agency”—where random things can happen…like Serac murdering Dempsey. It’s certainly brief, but how the hell could Rehoboam predict the future if it can’t foretell major events like this? 3) Serac also tells Demspey that in every scenario where the public was told about Rehoboam’s power to dictate their lives, humanity goes extinct. Dolores does exactly that, which effectively means her plan to Kill All Humans has succeeded. So what the hell does she need to do next? And what can Serac possibly do to fix the situation if the god-computer has proven humanity is doomed?

Other questions: Caleb sees Dolores get shot multiple times in the torso and be completely fine, so he realises something’s off about her. But why can she ignore these bullets when getting shot in the season premiere made her pass out? If Serac already has enough data to predict the future so accurately he can control the world, why does he want the Delos so badly? Why is Bernard the only Host Dolores can’t replace? And again, what the hell did Caleb do that made Liam freak out?

I’m guessing Westworld has answers for about half of these, and the rest are just unfortunate side effects of the show not having thought out the season’s story as thoroughly as it has in the past. Still, it’s nice Westworld is back to making me wonder what the hell is going on in a way that feels satisfying instead of suspicious.