Rick and Morty is back! To celebrate, we’re counting down our all-time favourite famous guest stars who’ve dropped by the show, giving voice to characters as varied as the Devil and a gaseous musical alien named Fart.

This list isn’t meant to take anything away from less-instantly-recognisable but no-less-crucial talent like comedian Andy Daly (who voiced chipper intergalactic assassin Krombopolous Michael) or animation powerhouses like Tom Kenny and Tara Strong (who’ve both contributed a variety of voices)”though it is definitely missing at least one big name we would rather not have heard on the show (hint: “Elon Tusk”). At any rate, all that is to say it’s not a complete list of everyone who’s been on the show beyond the main voice cast. It’s just our favourite list of guests so far, broh.

In “The Old Man and the Seat” (season 4, episode 2), the acting icons camp it up as an alien power couple behind a dating app that threatens to rip Earth society apart…until their own seemingly perfect relationship rips apart instead. 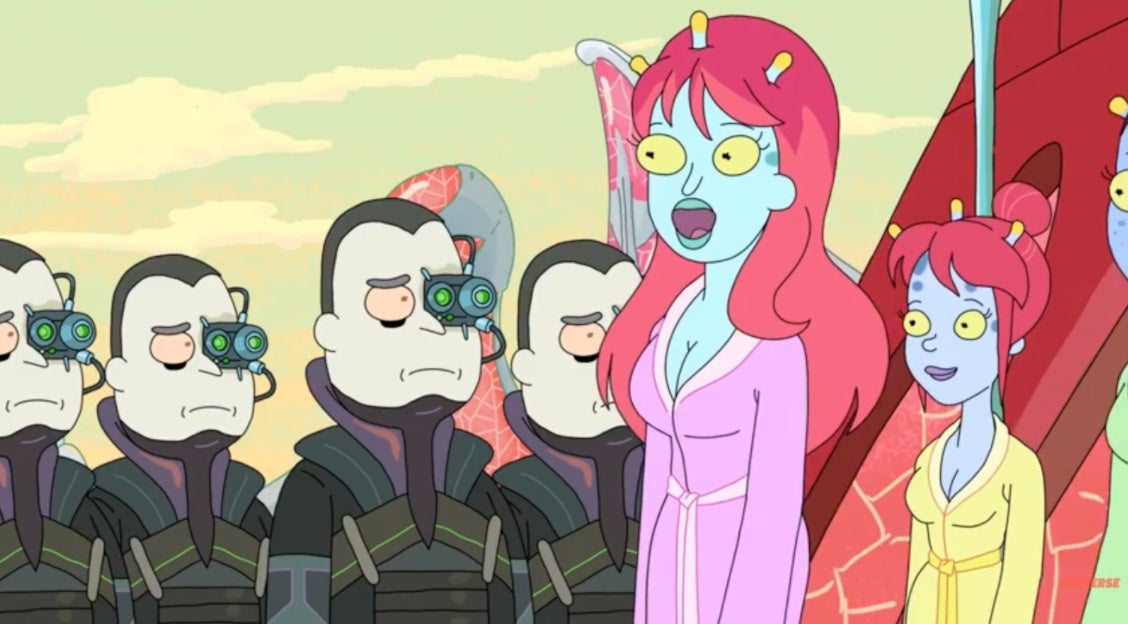 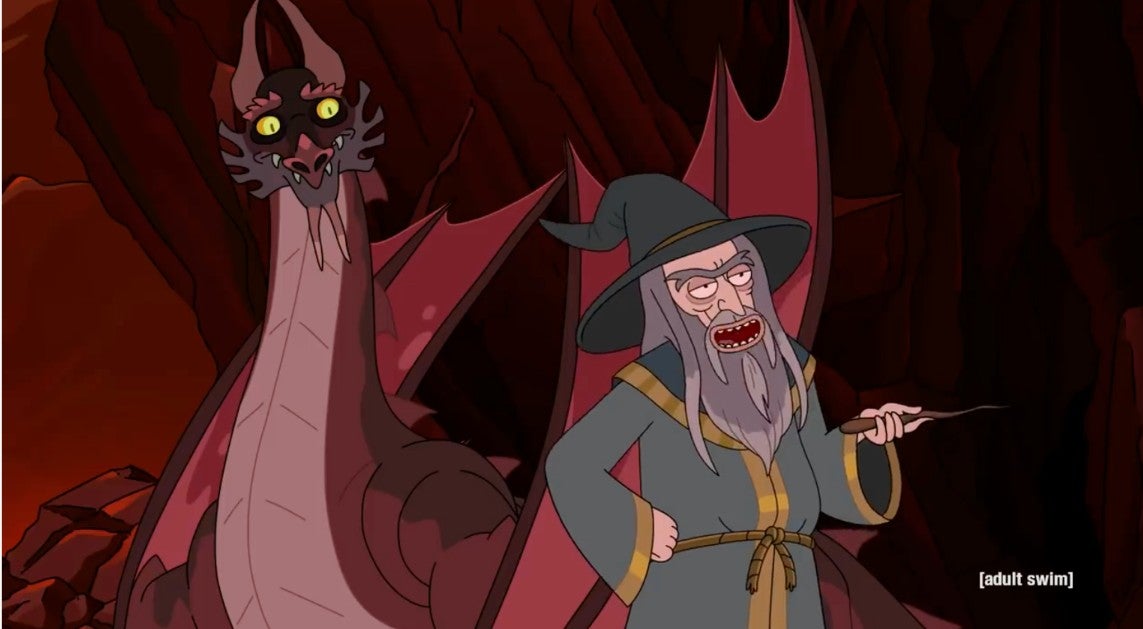 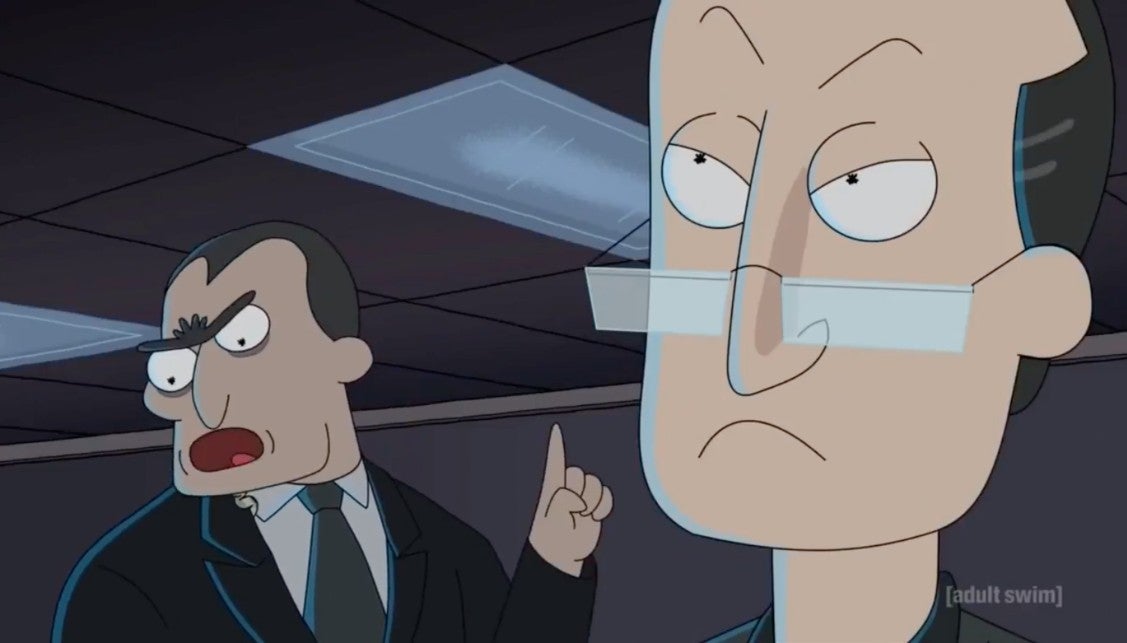 We never do find out why these guys have a super-secret prison facility in otherwise unremarkable middle America. (Image: Adult Swim)

Rick famously turns himself into a pickle to get out of attending family therapy in “Pickle Rick” (season 3, episode 3). Not really thinking things through, he manages to roll into a storm drain”though being the smartest man in the universe, he’s able to rig cockroach and rat parts to make himself more mobile than your average pickle. As it happens, though, his return to the surface brings him through a toilet in a mysterious Russian (?) facility that’s some kind of top-secret fortress, lorded over by an oily James Bond supervillain type voiced with the perfect amount of theatricality by The Tick himself.

The most recent Rick and Morty episode to air, “Never Ricking Morty” (season 4, episode 6), featured some fresh guest stars, most notably Giamatti as “Story Lord,” a ridiculously jacked villain who forces Rick and Morty to break the fifth wall”all part of the episode’s meta-meta-meta storytelling, which unfolds aboard a speeding “story train” so that everything can literally careen off the rails at the end. Yep, we see what you did there.

In the Jurassic Park-meets-Fantastic Voyage (and also, somehow, Christmas-themed) episode “Anatomy Park” (season 1, episode 3), Rick shrinks Morty and sends him to an amusement park inside a dying human body where the “exhibits” are all infected and rebelling. Oliver plays Dr. Xenon Bloom, Rick’s partner on the project”he’s sort of a paramecium with glasses, a mustache, and a verrrry Dr. John Hammond-esque walking stick. He heroically sacrifices himself amid the chaos, albeit not before we witness his all-too-familiar coping mechanism of stress-eating ice cream. 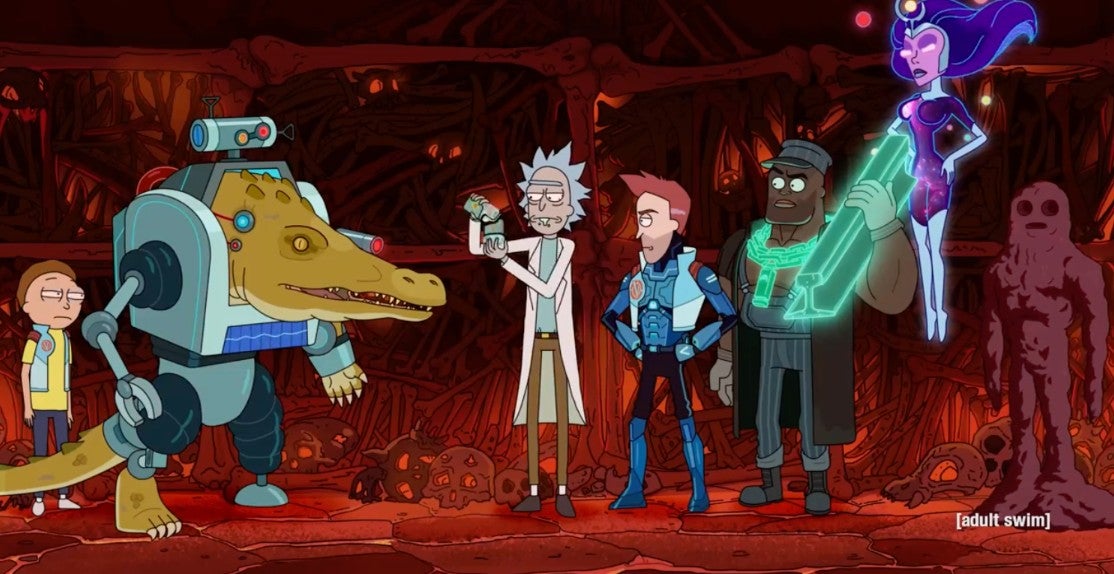 Rick is not a fan of the Vindicators. (Image: Adult Swim)

Rick and Morty dunks on the Avengers with “Vindicators 3: The Return of Worldender” (season 3, episode 4), featuring an array of guest actors, most notably Lance Reddick as Alan Rails (whose superpower is that he can…summon ghost trains!) and Christian Slater as the wisecracking Vance Maximus (who’s sort of a smarmy spin on Captain America). Perfect casting for both, though Reddick’s intensity while playing a guy who can…summon ghost trains (and is also a teeny bit jealous of his ex and her new ant-creature beau) is particularly hilarious. All aboard!

The Zigerions, a race of self-satisfied aliens who fancy themselves as skilled scammers, are obsessed with getting Rick’s recipe for concentrated dark matter, so they deploy a series of simulations to try and get inside his head. As the title “M. Night Shaym-Aliens!” (season 1, episode 4) suggests, there’s a twist ending involving simulations inside simulations inside simulations. Comedian Cross does the perfect smug voice as Prince Nebulon, the alien leader with the buttflap problem who only thinks he’s smart enough to pull one over on Rick.

In an episode that’s not totally dissimilar from the one we just discussed, Fillion plays a faux-congenial Galactic Federation Agent trying to pry the secrets of Rick’s portal gun out of his prisoner. But “The Rickshank Redemption” (season 3, episode 1), the interrogation unfolds inside of Rick’s mind, which means he’s way more in control of his surroundings, manifesting butts in coffee cups, ordering Mulan-branded sauce at McDonald’s, and tricking the Federation into swapping Rick’s soon-to-be-liquified brain with his interrogator’s, which means Fillion gets a moment in time to play his character as Rick, too. Buuurp!

In “The Old Man and the Seat” (season 4, episode 2), Waititi plays Glootie, Rick’s intern, who has “Do Not Develop My App” tattooed on his pink forehead. Naturally, Jerry decides to do the opposite, and before long the duo’s rapid-fire and rather random dating app, “Lovefinderrz,” has thrown the world into chaos. Waititi is delightful as always”major Korg vibes, of course”and he’s the perfect choice to play a mischievously irresponsible alien.

In “Pickle Rick,” she’s Dr. Wong, the therapist who specialises in curing people of their poop-eating urges, but is also remarkably insightful when it comes to breaking down Rick’s particular personality issues, as well as how his influence has shaped the lives of Beth, Summer, and Morty. 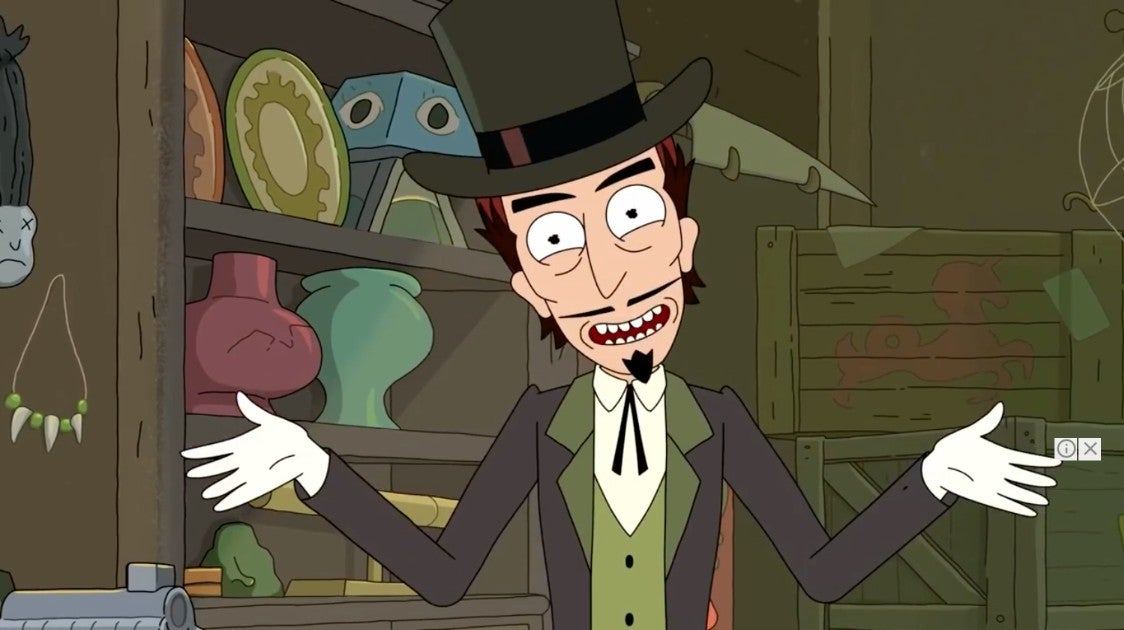 The versatile actor elegantly embodies “Mr. Needful,” who’s actually the Devil, in the Stephen King riff “Something Ricked This Way Comes” (season 1, episode 9). When Summer takes a job working at Mr. Needful’s store full of cursed trinkets, she initially remains loyal to her boss when he (inevitably) gets on Rick’s bad side. But family wins the day when Mr. Needful pulls the ultimate double-cross, shutting Summer out of their lucrative scheme to bring Needful Things online (“I’m the devil, biyatch! What what!”)”and Summer and Rick get a workout montage that solidifies their relationship and enables them to kick Needful’s arse.

In “The Ricks Must Be Crazy” (season 2, episode 6), Rick and Morty go on a troubleshooting mission to investigate why the miniverse that’s meant to be supplying power to Rick’s spaceship battery has suddenly cut off the juice. Once they arrive, they realise a very Rick-like inventor named Zeep Xanflorp (Colbert, who does a perfect know-it-all) has built his own “teenyverse,” creating a ripple effect that basically means Rick’s car won’t start. Rick and Zeep are so much alike they are instant enemies, though they do put their giant brains together very briefly when they get trapped in the primitive teenyverse. 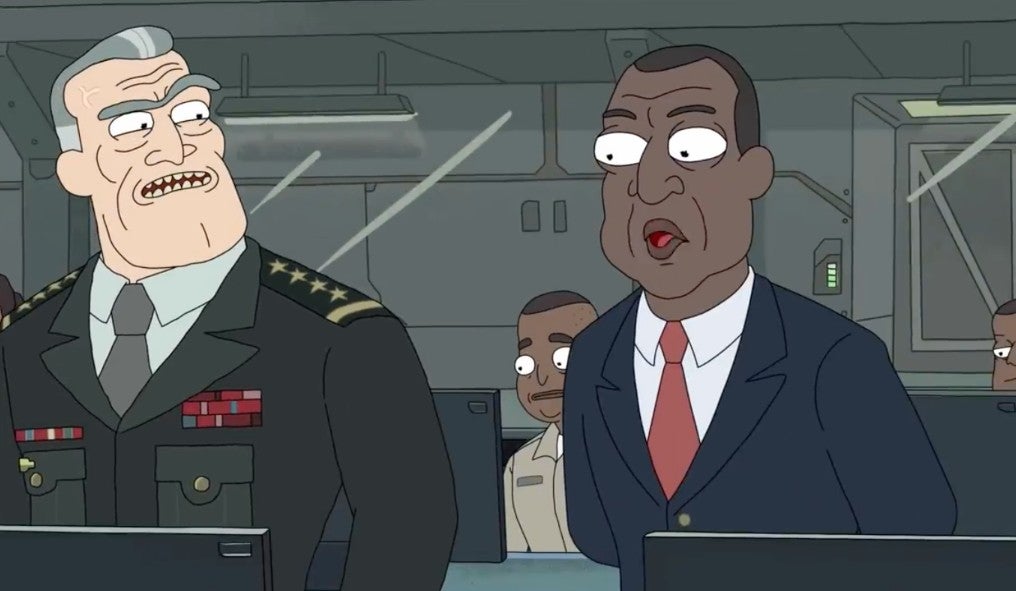 The POTUS watches as a song called “Get Schwifty” saves the planet. (Image: Adult Swim)

The eternally cool star of John Carpenter movies, Gargoyles, and many other fan-beloved projects was the perfect choice to play Rick and Morty‘s President of the United States”though he does lose his cool at the duo eventually. We first meet him in “Get Schwifty” (season 2, episode 5), when the dubious musical stylings of Rick and Morty help save the Earth from disintegration, but by the time “The Rickchurian Mortydate” (season 3, episode 10) rolls around, there’s a lot of tension between them, and not just because the POTUS won’t take a selfie with Morty (though that sure doesn’t help their relationship). Fun fact: David also gave voice to the alien parasite known as “Reverse Giraffe,” which is exactly what it sounds like, in “Total Rickall” (season 2, episode 4). 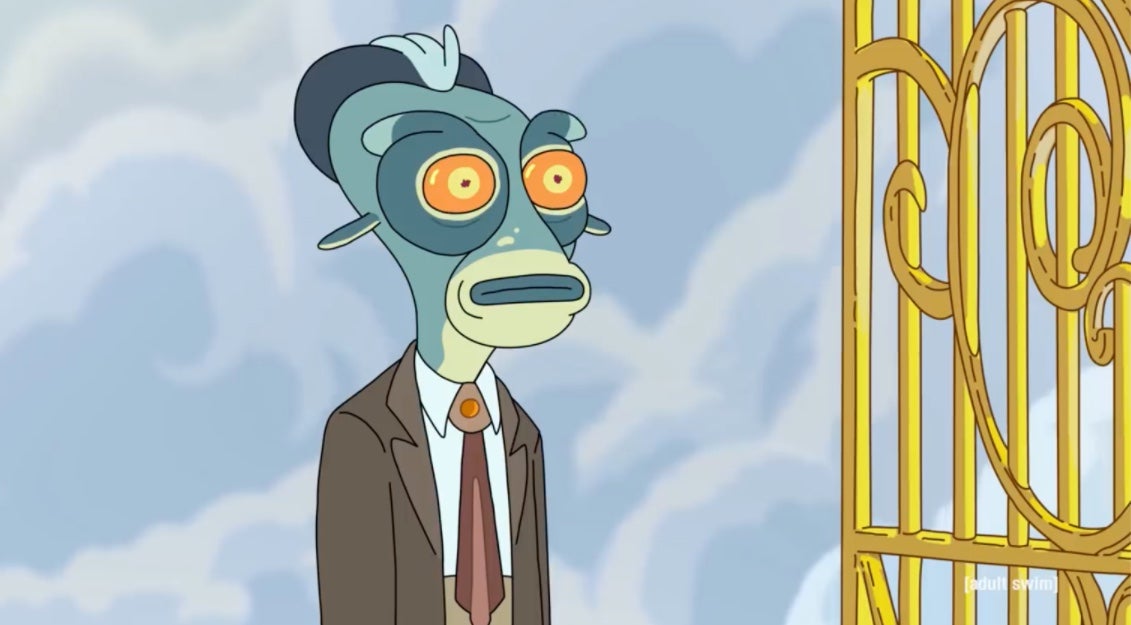 Westworld‘s Wright brings world-weary gravitas to Tony, the office-drone widower who hijacks Rick’s secret toilet in “The Old Man and the Seat.” The violation outrages Rick so much that he goes to all kinds of trouble to track Tony down, but he can’t quite bring himself to kill the guy”and after Tony dies in an accident that has nothing to do with Rick, the staunchly unsentimental scientist reluctantly realises just how much he’ll miss scheming against the poop invader. In the end, even Rick has to admit Tony wasn’t such a bad guy. Don’t call them friends, though.

In “Mortynight Run” (season 2, episode 2)”the episode that introduced us to intergalactic arcade Blips & Chitz, as well as “Jerryboree,” the daycare for tagalong and/or wayward Jerrys”Morty befriends “Fart,” who’s been targeted for death by Krombopolous Michael, and ends up rescuing him. Of course, that ends up being a terrible idea, since the prisoner (who resembles a gaseous, jewel-studded blob, is telepathic, and can poop out gold) is on a mission to eliminate all carbon-based life forms, including everyone on Earth. It doesn’t end well for Fart, but Morty learns an important lesson”and we, the audience, get a gorgeously trippy, David Bowie-esque musical number when Fart (voiced by Flight of the Conchords‘ Jemaine Clement) spontaneously breaks into song. 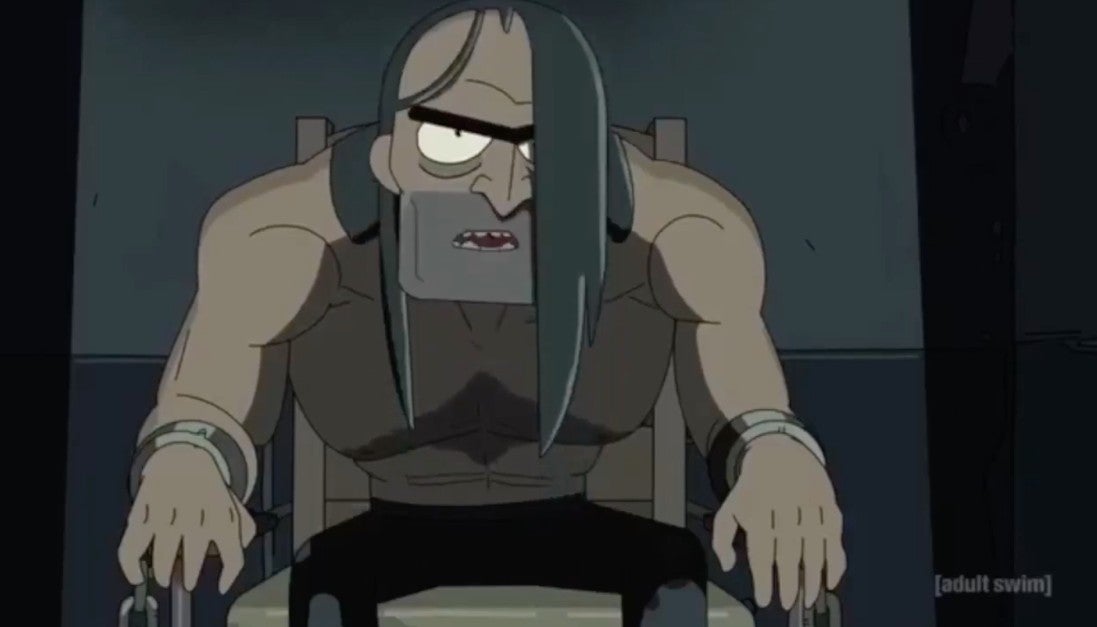 JAGUAR! In “Pickle Rick,” the bad guys unleash their prized prisoner to fight against Rick, but after a bit of Die Hard back-and-forth, the two warriors (one giant man played by the beloved cult actor, one man-pickle) become an unstoppable team and obliterate everything blocking their path to escape. At the end of the episode, we see Jaguar one more time”popping back into Rick’s life to return the favour and save him and Morty from being smashed to death on a giant piano. 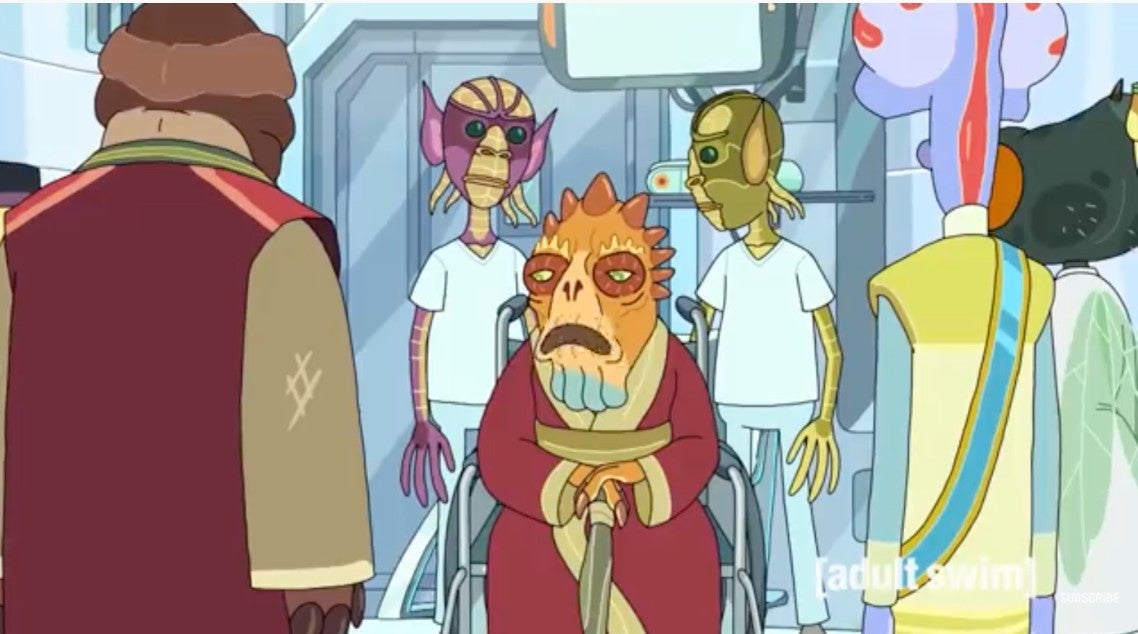 It’s just one brief scene in a jam-packed episode (“Interdimensional Cable 2: Tempting Fate,” season 2, episode 8), but if you want someone with an unmistakable voice to saunter in and deliver a deeply somber speech about humankind’s obsession with penises, Rick and Morty proves there is no other choice.