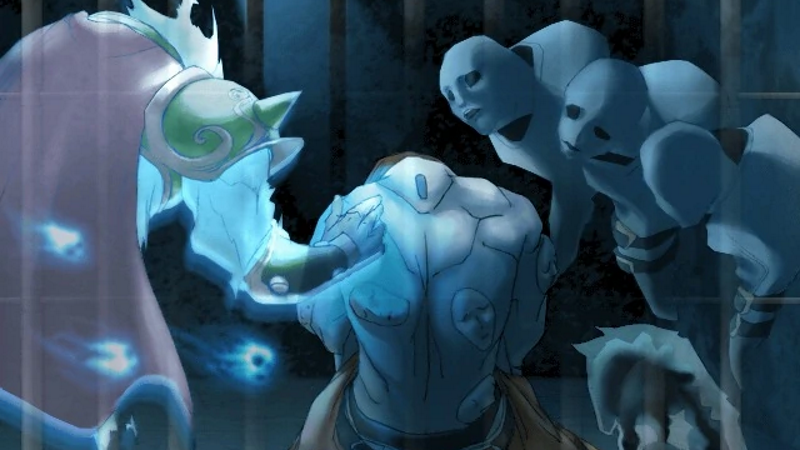 Screenshot: Arc System Works
Facebook may have decided that you shouldn’t see the news, but we think you deserve to be in the know with Kotaku Australia’s reporting. To sign up for our daily newsletter covering the latest news, features and reviews, head HERE. For a running feed of all our stories, follow us on Twitter HERE. Or you can bookmark the Kotaku Australia homepage to visit whenever you need a news fix.

Arc System Works recently shared the results of a survey taken by players of the Guilty Gear Strive closed beta. The most interesting findings come from the character request section. Players from around the world left some surprisingly uniform responses, and sadly, my favourite character is nowhere to be seen.

Zappa is Guilty Gear at its best. This haplessly possessed fighter debuted in 2002’s Guilty Gear XX, adding a spooky layer of the macabre to the series’ heavy metal aesthetics. Zappa is unusual in that he technically doesn’t do any of his own fighting. Instead, a vengeful spirit known as S-Ko takes control of his body during battle, contorting it in monstrous ways. His forward Slash, for instance, produces a demonic face from his back that pukes on the opponent. Sometimes, S-Ko’s own limbs burst forth from Zappa’s body to deal damage, serving to evoke the body horror of movies like The Thing or The Exorcist.

While playing as Zappa, your gameplan revolves around hitting the opponent with his centipede special, which grants you a floating orb and randomly calls one of three summons. Each summon—a sword, a trio of ghosts, and a shadow dog—have their own unique movesets, which makes learning Zappa almost like learning multiple characters at the same time. If he gets 8 orbs, Zappa calls forth a fourth summon known as Raoh. This godlike entity’s damage far outweighs the other three summons but is not always the best in every situation, making it yet another “character” you have to learn while playing Zappa.

Zappa has been absent from the playable roster since his last appearance in 2012’s Guilty Gear XX Accent Core Plus R, relegated to background character status rather than at the forefront where he belongs. And if the developers of Guilty Gear Strive listen to fans, it doesn’t seem like he’ll make an appearance any time soon. Across the four surveyed regions—Japan, North America, Asia, and Europe—Zappa failed to make the top ten. Instead, characters like Baiken, Johnny, and Dizzy received overwhelming support. Don’t get me wrong, you can’t miss when it comes to Guilty Gear characters, but Zappa is in a league of his own.

I’m often drawn to oddball characters in fighting games but rarely find the fortitude to stick with them. Zappa, though complicated, was different. I had a blast using him in random Guilty Gear XX Accent Core Plus matches from time to time, trying my hardest to summon Raoh in every match but mostly failing. It’s been a bummer to see Zappa take a back seat in recent games when everything about him is so compelling, not to mention how amazing he’d look in the series’ new 3D visuals. I only hope Arc System Works finds it in its heart to give Zappa some love in Guilty Gear Strive. I need my boy back.