The classic anime Cowboy Bebop is well known for its fusion of jazz confidence and Eastern melodrama. While it’s easy to remember the characters’ stylistic flair, what really allowed the series to endure was how often it showed its core cast to making mistakes and failing spectacularly.

Cowboy Bebop follows two bounty hunters, Spike Spiegel and Jet Black, in an alternate universe depiction of the last 21st century. They chase down marks and try to outrun their past, and along the way, they add the rogue hacker Edward and seductive con artist Faye Valentine to their crew. Most of the show’s 26 episodes split the difference between a crime procedural and comedy of errors.

This story has been retimed following the imminent release of Netflix’s live-action series, and the release of the official intro which directly references several episodes from the original anime.

For instance, an early bounty hunt of a thief who stole a dog from a science lab balloons into a city-wide chase, during which the technicians seeking the dog activate an experimental dog whistle.

Instead of capturing his mark, who just so happens to crash directly into a police station, Spike begrudgingly takes in the dog. The scientifically engineered pooch is worth a fortune, but our broke, hungry heroes never figure that out.

This pattern of failures is characteristic to the series; Spike and the others only rarely capture their bounties. They’re often left drifting in space with next to no money, eating “bell peppers and beef” that has no beef as their ship crumbles into disrepair.

It’s a status quo antithetical to the escapist structures of most anime and popular media, but it’s a large part of Bebop’s charm. Spike is an expert pilot, a crack shot, and Jeet Kune Do master, but he still bitches when the air conditioning doesn’t work. The crew of the Bebop is stylish but they’re also a bunch of losers. 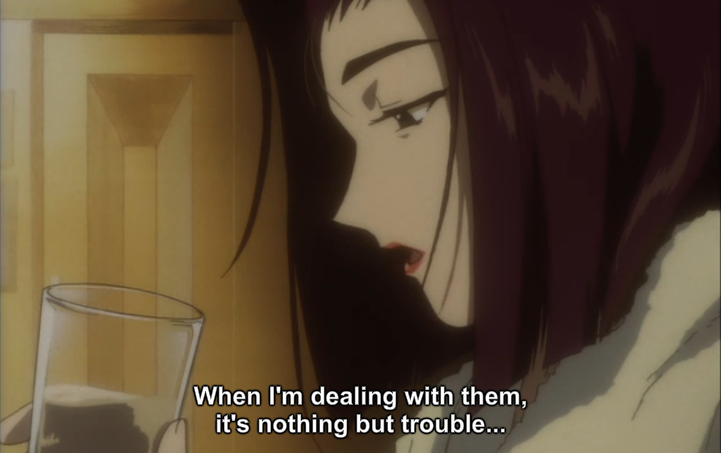 Bebop’s success goes beyond tossing some scrappy folks in a ship and watching them struggle. The show depicts them as broken people who don’t know how to function together; sometimes that ineptitude is played for laughs but the undercurrent of failure at the core of the show also results in more revealing moments.

Spike’s a risk-taker, as prone to anger as he is capable of heroics, and as the series explores his criminal past, it becomes clear that he’s self-destructive and perhaps even suicidal. His risks are bold and sometimes pay off, but he takes them because he can’t accept the world as it is. He’s living in a “bad dream [he’ll] never wake up from.”

Meanwhile, Faye can’t commit to new relationships. When she leaves the crew in “Jupiter Jazz Part 1,” a musician she meets at a bar notes: “You were just afraid they’d abandon you, so you abandoned them.”

These deeply rooted flaws affect the cast’s dynamic. They’re not temporary states that create conflict for one episode. Spike and the others fail because they are so broken.

When my coworkers gathered to chat about the series earlier this year, they also noticed the series tendency to balance out the sillier moments with incredibly human motivations.

That humanity is both the beauty and tragedy of Cowboy Bebop. Even as series concludes and characters grow—Faye learning how to connect with the people she has now, Ed leaving with their father, Jet no longer dogged by guilt for past mistakes—Spike can’t quite make the leap. Instead, following the death of his lover Julia, he makes a bold attack on a crime syndicate’s headquarters and kills his rival.

The last we see of him, Spike is wounded and near death. He falls and doesn’t appear to get up. He could not escape his past, could not let go of the things he loved. He’s stubborn until the end. Arguably, that’s what kills him.

The show doesn’t paint stubbornness, and its theme of failure, as shameful. Cowboy Bebop is also about being authentic to yourself. Some characters change and grow, some fall into their own righteous anger, but each of their moments are honestly motivated.

Spike could walk away, but he doesn’t, because that’s not who Spike is. In much the same way, the Bebop isn’t the Bebop if it isn’t falling apart. Cowboy Bebop is about being yourself, even if you’re a failure. No matter what the consequences.