I went to the flea market, and found exactly what I was hoping for: a big pile of cheap video games. In this case, it was a bin full of somebody’s collection of big-box 1990s PC games, adult-owned, in mint condition. I suddenly found myself the owner of the critically acclaimed I Have No Mouth And I Must Scream, and also the largely-forgotten Pyst, a parody of Myst starring John Goodman.

I decided to spend the balance of Sunday trying to play one of them, and since I am a big dumb idiot with questionable taste, I chose Pyst.

Pyst was released by a company called Parroty Interactive in 1996, over three years after Myst was originally released, which speaks to just how long a shadow the original work cast over the computer gaming scene during the mid-90s. The surreal, beautiful, legendarily frustrating adventure game single-handedly convinced millions of people to buy a CD-ROM, and Parroty Interactive surely imagined that some portion of those millions would buy Pyst. And they did, because apparently it was successful enough for the company to release three more products: Star Warped, The X-Fools, and Microshaft Winblows 98.

I remember seeing Pyst at a computer fair back in the day, noting its primary marketing bullet point: It starred actor John Goodman, then highly recognisable from Roseanne and, um, King Ralph. Goodman played “King Mattruss,” a parody of Myst’s “King Atrus,” and also sang the theme song, “I’m Pyst (Theme From Pyst).” If you wanted to hear the song, you only need place the Pyst CD into your CD player! The box even promised online connectivity through your dial-up modem. Truly, it was a product for the 1990s.

I said I remember seeing it at a computer fair, but I never said I bought it. Even then, it didn’t exactly look good. Well, now was my moment to actually try it. I double-clicked on SETUP.EXE.

It didn’t work, of course. Pyst is compatible with both Windows 3.1 and Windows 95, but somewhere along the line, Windows stopped being compatible with older programs. And it won’t shock you to hear that Parroty Interactive isn’t around anymore to provide an officially updated version of Pyst for modern devices. It quickly became clear that, as in most cases of attempting to preserve gaming history, I’d need to turn to the pirates.

First, I tried to find a version of Pyst that had been unofficially hacked to play on Windows 10. I failed at this because nobody in their right mind cares enough about Pyst to do that.

It soon became clear what I was about to do, which seemed ridiculous and yet utterly sensible. I was going to run DOSBox, the DOS emulator, and then, while that was running, I was going to actually install Windows 3.1 onto my computer. Minesweeper. Solitaire. All of it. I was going to use a tiny sliver of my terabyte hard drive to downgrade my PC back to 1993, for the most ridiculous possible reason.

That part was easy. DOSBox keeps all of its activities limited to a little partition of your drive, creating a computer within a computer so you can compute while you compute. I ran Windows 3.1’s setup for the first time since I was in high school. When it tried to tell me how much hard drive space I had available for the install, the numbers glitched. 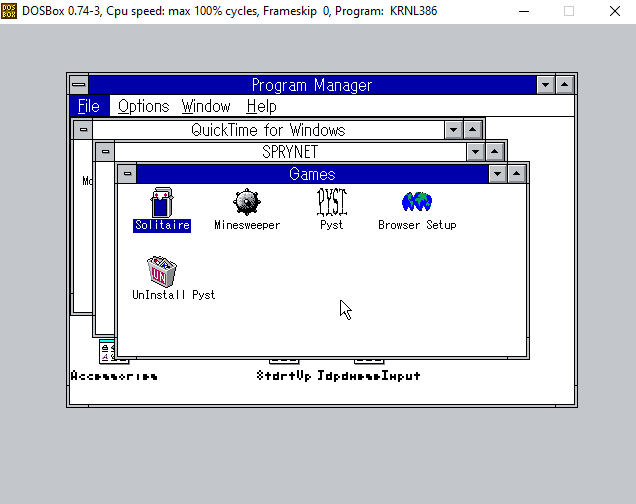 Windows 3.1 booted up in a window, about 100 times as fast as it had the last time I used it. Even if I had only ever gotten this far, I would have considered it a great use of a Sunday. All these low-resolution icons I remember, like old friends! I opened up File Manager and tried, once more, to run SETUP.EXE.

Success! Suddenly, I was installing Pyst. And also, QuickTime, which it requires to play movies. Fortunately, that was on the disc. Using Pyst’s online functionality also requires a web browser, which it also included on the disc because in 1996 you couldn’t be sure your customer would actually have a web browser on their computer!

The Pyst icon appeared in Windows, and I double-clicked it. 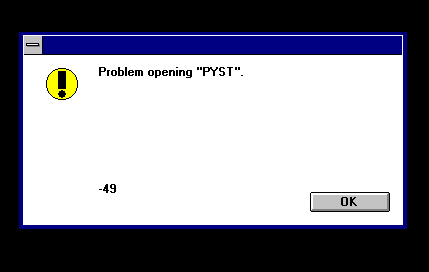 Of course. I tried a few other things, but it kept giving me this error. At this point, I asked Twitter if anybody had actually gotten it running. (Very) long story short, other, smarter people chimed in to say they didn’t have this issue, and I ended up just having to delete everything, reinstall a different version of Windows 3.1 found on some other random website, and try again.

Success! Now I could finally find out what the deal is with Pyst. As it turns out, it doesn’t have much of a deal. It’s built as a series of nine interactive “postcards,” which was probably meant to poke fun at how the original Myst was built with HyperCard. The setup is that the mysterious island of Pyst, having been thoroughly explored by four million people, is now a total ruin filled with nuclear waste and trailer parks, two iconic targets of 1990s humour.

Once you get to the second postcard, you can click a button to get a message from King Mattruss, a brief QuickTime clip in which comedy genius Goodman tries his absolute best to wring every last laugh out of a terrible script. Click the button again and you’ll see a second brief scene with Goodman. You have now seen two-thirds of John Goodman’s onscreen appearances in Pyst.

There are no puzzles in Pyst; it’s just a series of barely-interactive scenes where clicking objects causes little bits of canned animation to happen on screen. Click a bird and it poops. Click the dog and it pees. Click the outhouse and nothing happens for some reason, even though toilets are a comedy goldmine. 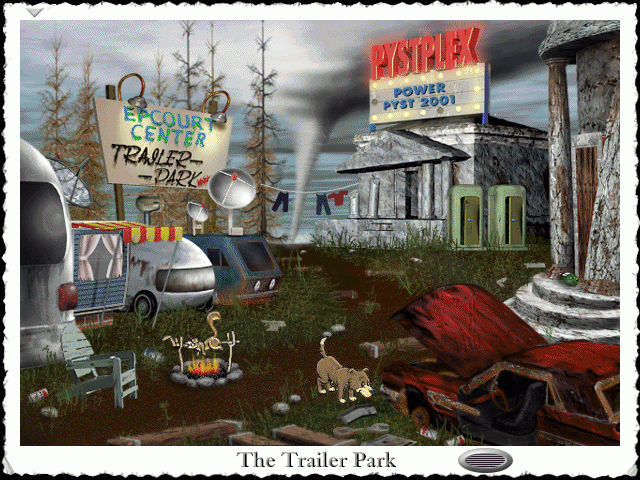 There are specific references to Myst, like blue and red books, a library full of secrets, et cetera. Much of this is probably a little funnier if you’d just spent dozens of hours playing Myst. But not that much funnier. One of the king’s sons is known as “The Prince Formerly Known As Prince,” if you needed another indicator as to exactly when this game was made.

The song “I’m Pyst (Theme From Pyst)” is actually pretty good. You can experience that part without having to install Windows 3.1.

Pyst even includes its own “Making Of” video. Maybe that came off as indulgent in 1996, but today, I’m happy to have this little documentary showing this tiny software company that only lasted a few years but still managed to get one of the most recognisable actors of the day half-naked and up against a green screen.

It’s easy to dismiss Pyst as a lousy game, but as a historical artefact it’s fascinating, a remnant of the impression that Myst left on the world and a document of how it was perceived. It’s annoying that the only way to experience these games today is to jump through the hoops of reinstalling Windows 3.1 on one’s computer, but it’s great that people have done all the hard work to make that a possibility.