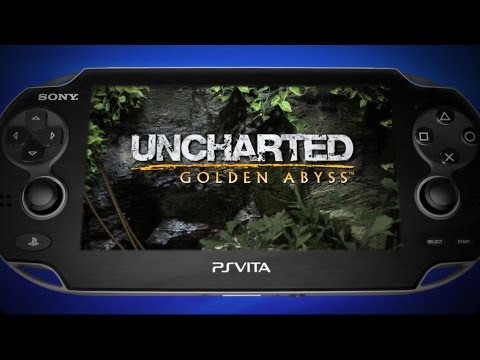 It sounds like hype, but really it’s a matter of fact; with two analogue sticks, shoulder buttons, front and back touch controls and a motion sensor, these 10 Vita launch window titles are going to put your manual dexterity to the test.

Take Uncharted: Golden Abyss for example. The shooting controls for this flagship Vita title are so convoluted they’ve had to come up with an entirely new term for them: Intu-aim. From the PlayStation Blog:

Because the PS Vita is the first device that combines two analogue sticks, a Sixaxis motion sensor and a touchscreen, we realised we could create a universal aiming system with fine-tuned controls that would be impossible on any other system. Core aiming still works best on the analogue sticks: in over-the-shoulder mode, players still use the left stick to adjust Drake’s position and the right stick to adjust his aiming reticule — just as you would expect in any modern console game. But PS Vita adds a third input: you can rotate your hands to subtly fine tune the reticule’s placement. Having everything on the same controller creates a synergy between your eyes, your thumbs and your hands that feels natural: use the sticks to aim at an enemy, use the motion sensor to aim at his head.

It may feel natural, but explaining it certainly doesn’t. I can’t wait for the Vita’s February North American launch (and neither can Stephen Totilo) to get in on the fun of trying to explain to you folks exactly what I’m doing while I play games like Wipeout 2048 and Gravity Rush. I’ll more than likely use the term ‘reach around’ more than once.

Check out the gallery for the other nine new trailers showing off how the PlayStation Vita’s unique controls will change the way you play games.

Escape Plan takes advantage of the PlayStation Vita system’s multi-touch display, rear touch panel, swipe interfaces and motion sensor, putting the fate of the hapless heroes in the palm of your hand. Players can swipe, squeeze, poke and slap Lil and Laarg to manipulate the characters and interact with the diverse environments. Only you can help them survive each deadly room before their captor and nemesis, Bakuki, recycles them and turns them into his minions… or sheep.

Rack ’em up and hustle your way to the top of the global leader boards in this beautifully chic, yet minimalist pool setting. Control every move with an intuitive touch interface, and challenge your friends over 3G networks with quick push notifications. Just be sure to hone your skills and earn cash before entering the bustling online scene.

o Line up the perfect shot with the intuitive front and rear touch interface.

o Stay connected to your opponents when you’re on the go with push notifications between turns.

o Compete in Hustle or Standard Mode against friends playing on their PlayStation 3 System.

o In “Hustle Mode”, hustle others for their “Hustle Kings Credits” and then spend it in the in-game Hustle Kings Shop.

Join Sackboy in a completely new adventure, filled with adventure and competition. New Touch controls lets you PLAY with more freedom. customise Sackboy and the world around you with unique Touch and Camera CREATE tools. Then discover an endless amount of free games, created and SHARED by fans online.

Join the Little Deviants in a series of madcap adventures that allow you to have fun discovering and experimenting with the new PS Vita functions – including rear touch, front touch, six-axis motion senors, front and rear cameras and microphone.

Put yourself in the battle with Reality Fighters! Using AR technology, scan your face or your friends’ faces to create your own personalised fighters. Choose from many distinct (and crazy) fighting styles ranging from Muay Thai to Ballet, and compliment your fighter with hundreds of costume pieces and weapon types. From kitchen tops to parking lots, the world is literally your arena as the stages you fight in are determined by the environment around you.

The Super Stardust franchise blasts its way into your hands with its latest iteration: Super Stardust Delta. With brand-new features made specifically for PlayStation®Vita, players continue to destroy everything in their sight. Create black holes, launch swarm missiles and unleash shockwaves with all-new PlayStation Vita controls.

Prepare for a dose of pure adrenaline as the iconic anti-grav combat racer Wipeout soars onto the PlayStation Vita. Featuring 10 new racetracks, a bonus system that allows access to new ships and many of the new PlayStation Vita functions, including cross-play with the PlayStation 3 system.