Where The Word ‘Cosplay’ Actually Comes From

‘Cosplay did not suddenly appear,’ says Nobuyuki Takahashi. He should know: Takahashi helped invent the word itself.

The following is an excerpt from Cosplay World, a new book written by Kotaku’s Brian Ashcraft and, well, me. It’s available now on Amazon and other online (and physical) book stores.

In the 1970s, Japanese college students began dressing up as manga and anime characters. These young people had grown up on a steady diet of comics and cartoons, and when they attended manga and anime conventions (as well as school and university festivals), going in character was, as in the West, a way to express fandom.

Sci-fi conventions had existed in Japan since the 1960s, but in 1975 Comic Market (aka Comiket) launched, creating a venue for self-published comics. It was a fan convention and, in this environment, what would become cosplay in Japan started to flourish. There was already a Japanese term to express the concept of dressing up: kasou (仮想).

However, the word carried a nuance of disguise and didn’t quite capture the spirit of what cosplay had become. In the West the word ‘masquerade’ could be used to refer to costuming, but when Takahashi and some university friends tried to translate ‘masquerade’ into Japanese for a magazine article they were writing, it sounded ‘too noble and old fashioned’. According to Takahashi, ‘We needed to find another way to express the concept.’

Various terms were floating around. ‘We had heard the English word “costume” and seen events with names like “Costume Show”, “Kasou Show”, “Hero Play” and what not,’ says Takahashi. In Japanese, English and other foreign words are often combined and/or shortened, for brevity’s sake. For example, the Japanese for ‘remote control’ — rimooto kontorooru — is shortened to rimokon. ‘So we started to think of different combinations,’ Takahashi says. ‘Finally, we came up with “cosplay”.’ The term was a portmanteau of ‘costume’ and ‘play’. It was perfect. 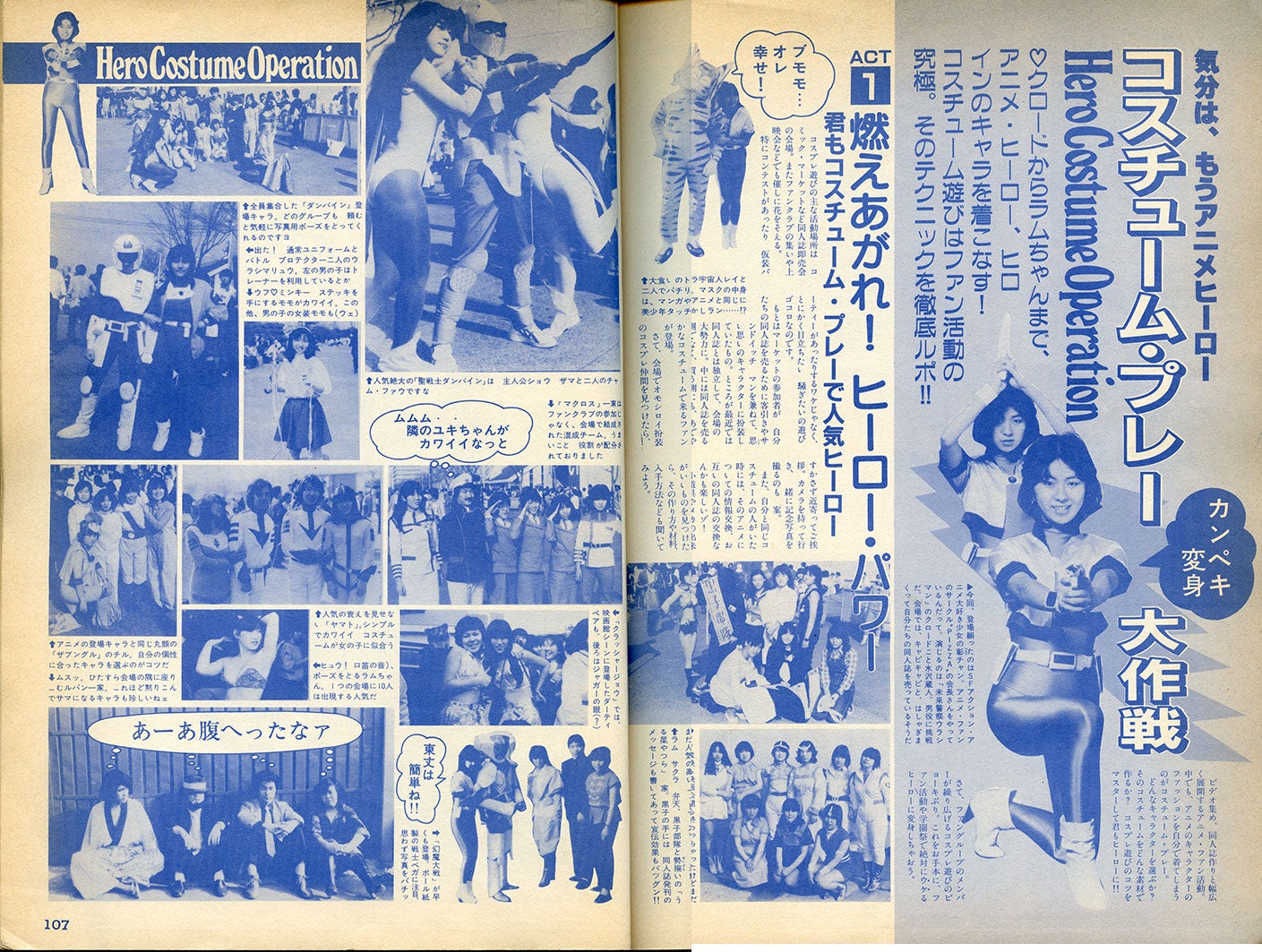 Takahashi’s cosplay article appeared in the June 1983 issue of My Anime (above). It covered the fans who dressed up as manga and anime characters from the Comiket convention in Tokyo. The article featured an array of cosplayers in elaborate costumes: superheroes like Kamen Rider; realistic robot costumes from anime such as Techno Police 21C; anime heroes from Lupin III and Star Blazers; as well as sexy cosplay, like Lum Invader from Urusei Yatsura. There was even a special feature on female cosplayers who dress as male characters, something that continues to be popular today. Many of these types of characters — superheroes, robots and sexy characters — are still prevalent in both Japanese and international cosplay. Yet already in the early 1980s, cosplayers were excelling at them.

There’s a reason for the discrepancy. According to Takahashi, ‘When we were putting together that article, we were still in the process of thinking what we should call this activity. That’s why it wasn’t yet summed up in one word.’ (Good thing ‘hero costume operation’ didn’t catch on, huh?) While it’s possible others in Japan also hit upon the term ‘cosplay’ at around the same time, this was the first time the word appeared in print.

At Japan’s biggest comic book convention later that year, few people knew the term. According to Takahashi, a year or two later ‘cosplay’ was in wide use among fans attending manga and anime conventions. It wasn’t until the ’90s, though, after the subculture was introduced on television and in magazines, that the word finally hit a wider audience in Japan. Even Takahashi is surprised that, 30 years on, the term has caught on worldwide.’

Cosplay is a fan’s expression of his or her love for a favourite character,’ says Takahashi. ‘Drawing a piece of artwork, writing a story, animating a movie and showing this to others is a manifestation of that love. And cosplay is one of those expressions in which fans use their entire bodies.’ But has he ever cosplayed? ‘Nope, not even once,’ says Takahashi, who heads up a design and planning company for publishers and broadcasters. ‘Typically, I wear casual clothes at the office. Whenever I wear a business suit, that’s me cosplaying. Cosplaying as a businessman.”