Arkham Knight's Trying To Hype Up One Of Batman's Worst Villains

The folks making the next Batman game swear that the Joker won't be in Arkham Knight. So they clearly need a new big bad to center this game's plot around. But Scarecrow? Come on. That guy is wack.

Spoilers follow for this week's Arkham Knight comic and some events from previous Batman video games.

The new teaser for this year's Bat-game is trying to convince viewers that fucked-up college professor Jonathan Crane is the mastermind behind the plot to kill Batman once and for all. Yeah, right.

The scenario put forth in the promo clip has strong echoes of the Knightfall storyline, which saw Batman face a legion of his enemies co-ordinated by one mastermind's plan. In the comics, the head schemer was Bane, who's been a bit overexposed in the Arkham games. He's presented as a Hulk-like strongman and not as a strategic genius. Who's another genius-level Bat-villain? The skinny guy who like to cook up a nasty fear toxin.

However, the Scarecrow isn't the greatest nemesis to anchor a big-deal video game on. He's basically a walking plot device, a reason for Batman or other characters to face their inner demons and come out stronger on the other side. He's always been presented as too obsessed with making people afraid or ruling through fear to command other villains who don't intimidate easily. And while the upcoming game could diverge from the character's comic-book iterations, he's never been really compelling on his own to command any truly memorable story arcs or continuity events like, say, Hugo Strange did. Before he got featured in the Arkham games, Strange was the focus of at least two plotlines where he presented a significant threat. Scarecrow? He was in an animated episode that gave us a great line of Bat-dialogue but he's never been a villain that people get excited over. Batman generally beats Crane by simply believing in himself.

And, yes, the Scarecrow sequences in previous Batman Arkham games have been amongst the best parts of those titles. But those were just small moments in the spotlight. Really, Crane's prominence in the hype so far highlights the Joker Problem that cross-media Bat-adaptations face. The white-skinned clown is so seductive for creators because he's well-known to people who don't read the comics regularly. He's an easy hook, especially with the symbolism of Batman's order vs. his chaos. But he's dead in the Arkham-verse, isn't he? The new comic tying into those games casts some doubt on that.

Out this week, Batman: Arkham Knight #1 picks up right after Arkham City and does the due diligence of showing the Clown Prince of Crime's body multiple times. But, of course, all isn't what it seems. 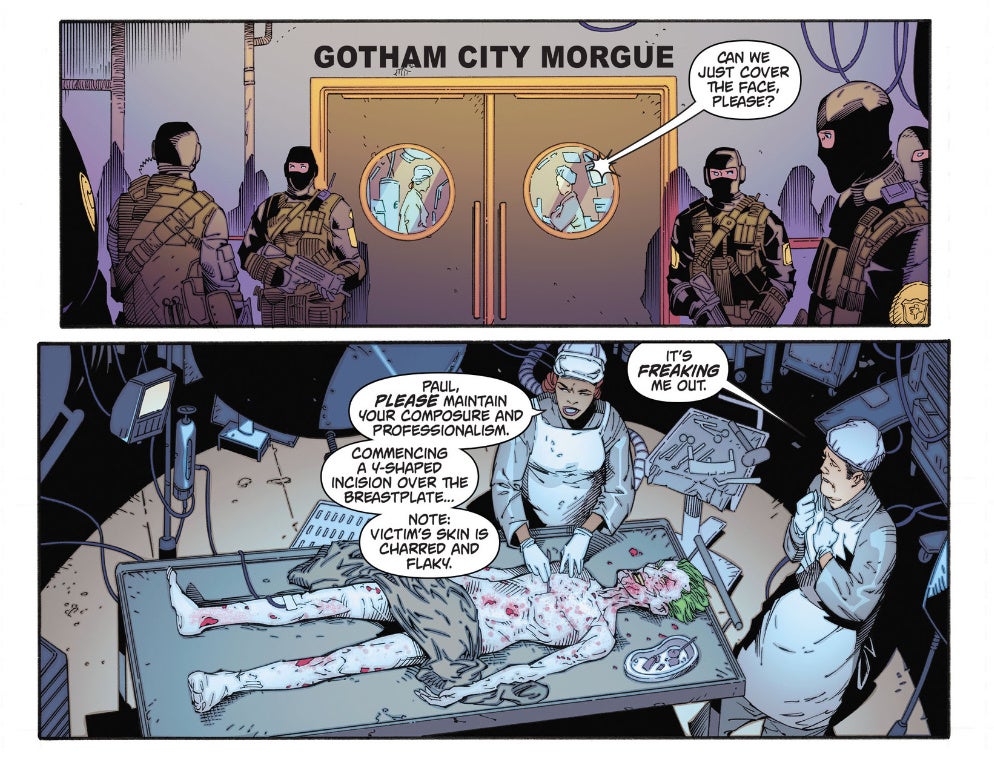 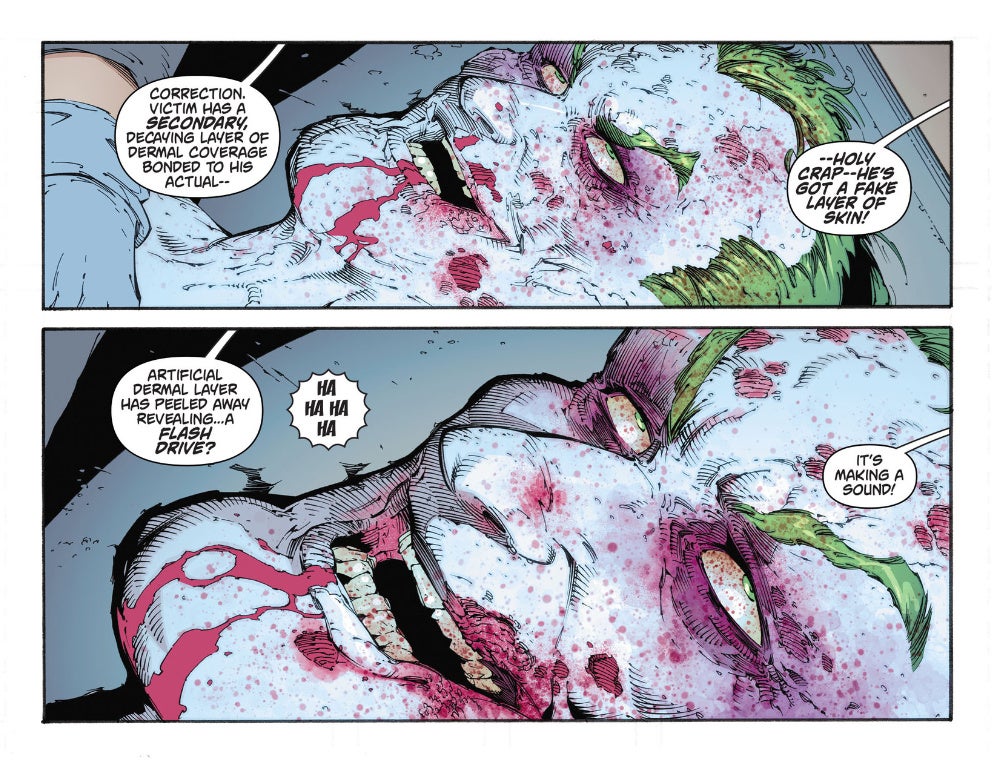 It's probably really unlikely that the comic will be contradicting what Rocksteady game director Sefton Hill has previously said about the Joker's presence in Arkham Knight. Odds are good that this Joker subplot is something that will resolve in the comic. But, keep in mind, Rocksteady has a history of misdirection when it comes to the Joker, so this might be a wait-and-see moment.

The digital comic does a quick sequence spot lighting the Arkham Knight and advances the idea that this new character is someone who Batman won't be able to scare, someone who knows the Dark Knight really well. 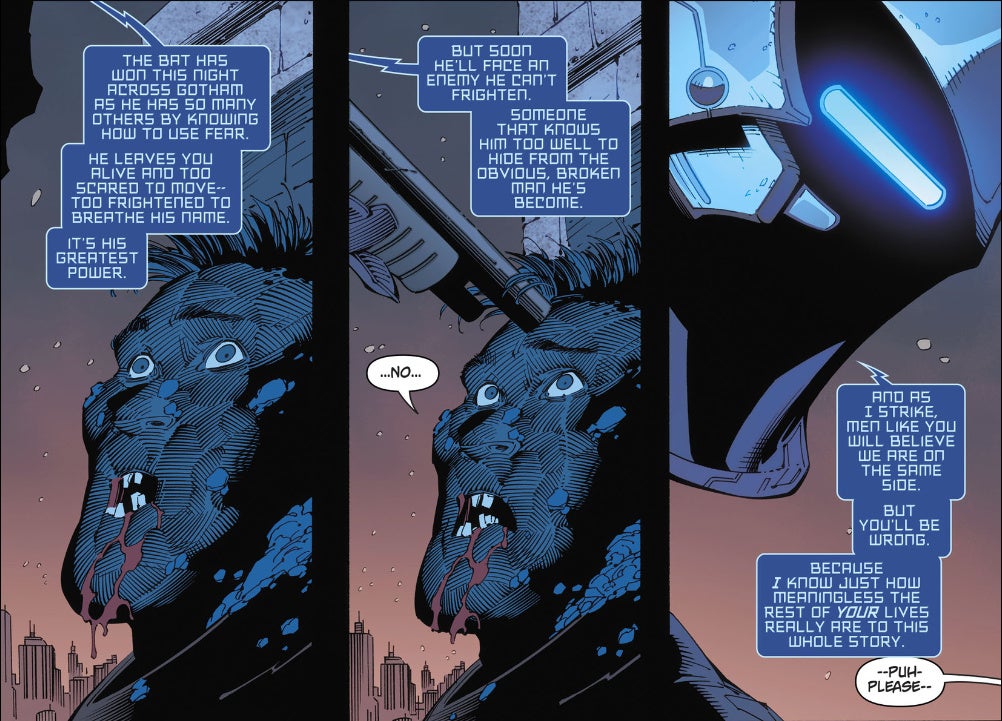 Who could it be? Well, the Red Hood — this version looks to be Jason Todd, a one-time Robin who uses lethal force — will be a pre-order exclusive playable character in this game. The Knight's propensity for guns might be be a hint that he's yet another identity that Todd adopts. Or it might be a red herring and it's really Hush/Tommy Elliot under that armoured headpiece. Of course, he could be a toatlly all-new character created solely for the game. Whoever it is, it's a fair bet that they're not taking orders from Scarecrow. Because he's just a wimp without that gas of his.