My First Third-Party Transformer Is A Complicated Woman

Azalea, an obvious homage to Arcee, the original female Transformer, is actually one of three third-party creations my wife allowed me to purchase from Toy Dojo after a non-stop barrage of web links and begging. I’ll be sharing the other two in the days to come — for now, it’s all about Azalea.

As soon as permission to buy was achieved, Azalea here was the first figures in my virtual shopping cart. I’ve always been a fan of the female Transformers — something about the absurdity of machines being assigned sexes — and since I was having trouble locating Hasbro’s latest version of the original, I figured I would go for the next best thing. 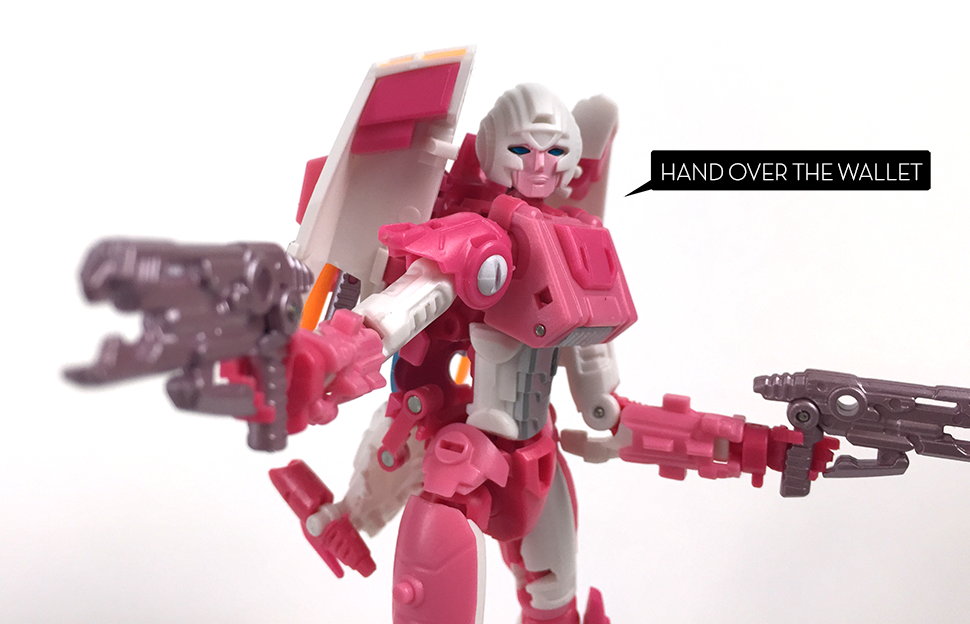 Not only was Azalea first, she was also the least expensive at a mere $US59.99. Still relatively costly for a toy her size, in the world of third-party Transformers she’s a steal. It costs a whole lot more for a third-party company to create a small batch of original designs than it does for Hasbro to grind out a hundred thousand Optimus Primes. 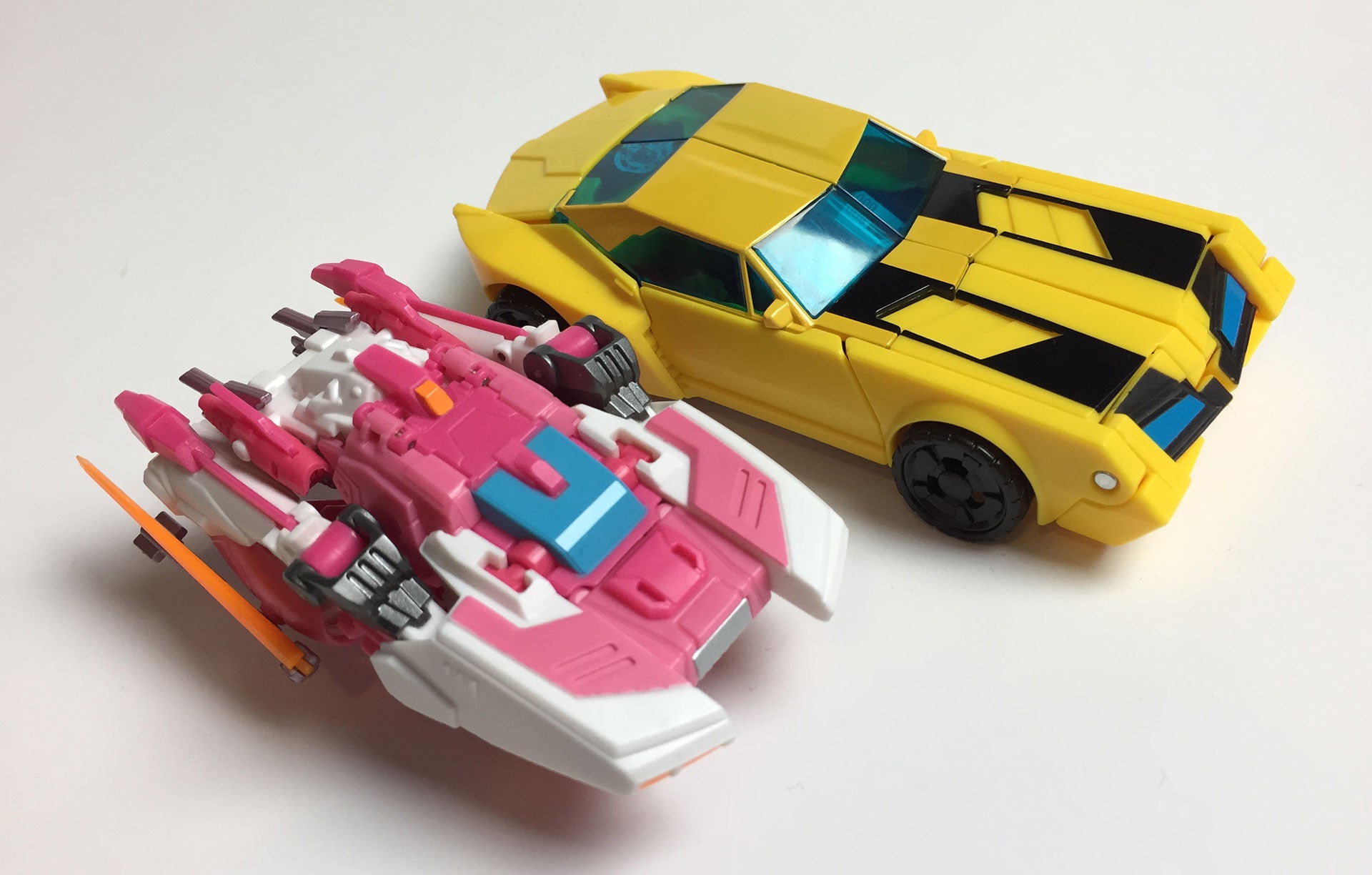 In her hovercraft mode — each of the fembots in Mastermind Creations’ line share a similar vehicle form — Azalea isn’t quite as large as the deluxe Bumblebee from the upcoming Robots In Disguise cartoon. Since Bee only cost me $US15 or so, it’s easy to see why it took me so long to go third-party.

Azalea comes packaged in a lovely box. Her instructions are a full booklet, with a couple of pages detailing how to transform her back and forth, and the rest a full-colour comic book. It’s a much nicer package than anything I’ve seen on a Hasbro product recently, so some of that larger price tag does go towards presentation. 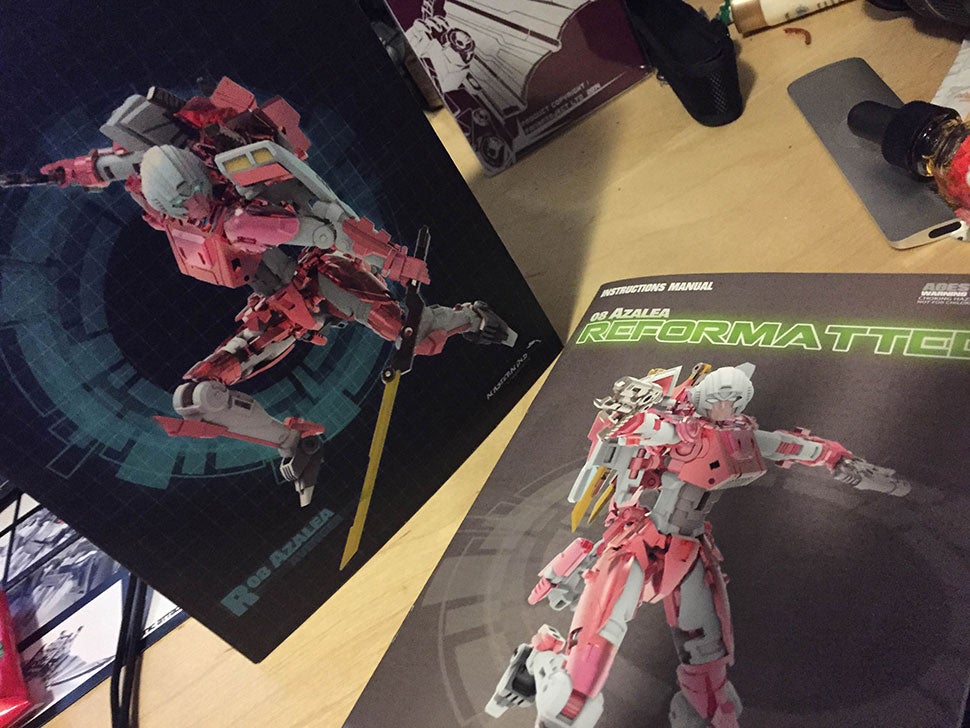 The rest of the money went to making a ridiculously well articulated, highly detailed female-ish robot that is nearly impossible to transform properly while taking a video. I’ve seen prominent Transformers reviewers do it on Youtube, and I am pretty sure pre-show prep included sacrificing a goat.

Watch me attempt to transform Azalea in the video below. Mind the dry fingers and warbly voice, I’ve been sick for what seems like years.

Somewhat frustrating for certain, but isn’t every relationship?

It’s a trade-off, really. In order to make a figure that’s so detailed and poseable it can do this… 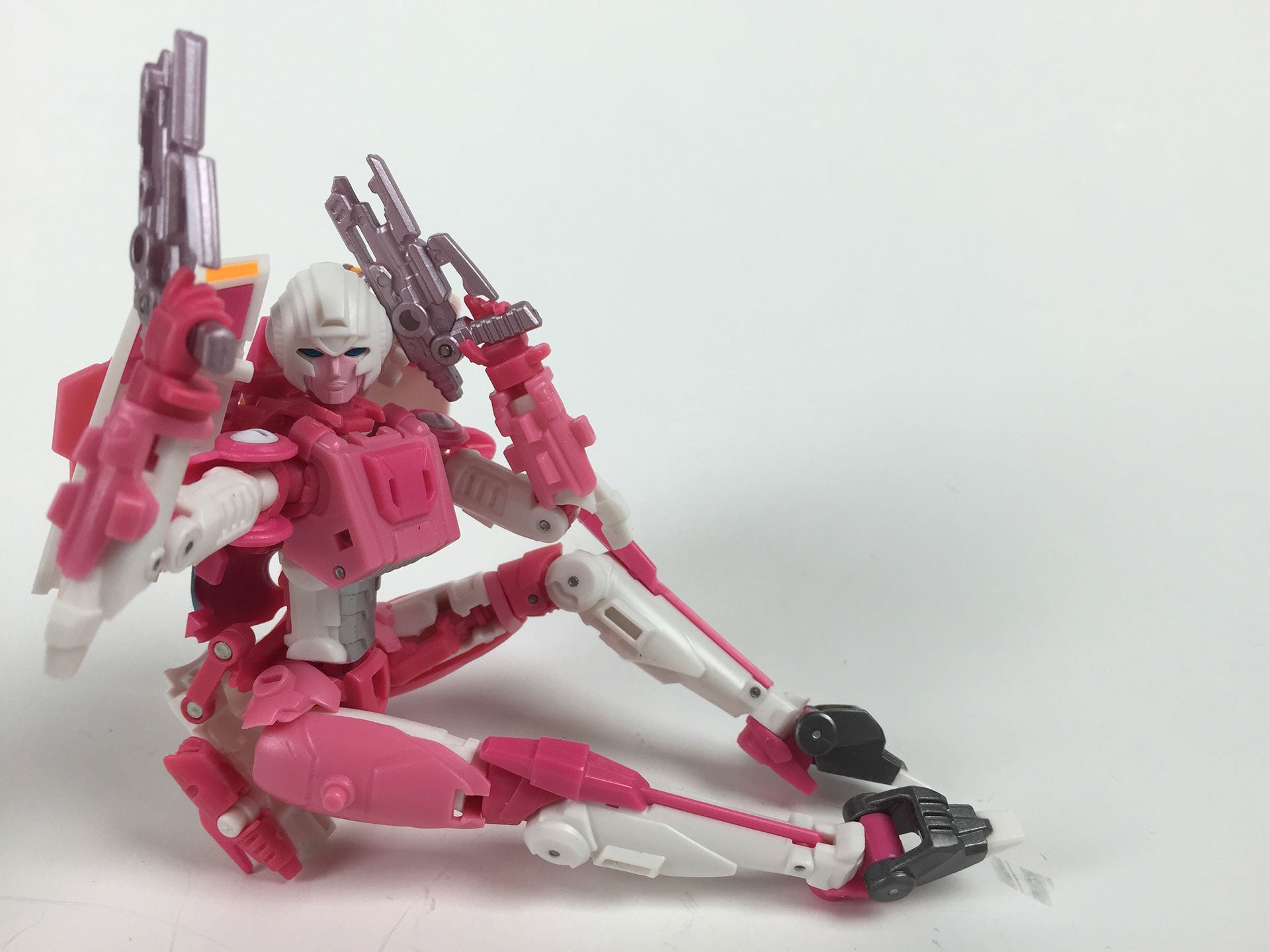 …you’re going to have a little trouble getting her to look like this: 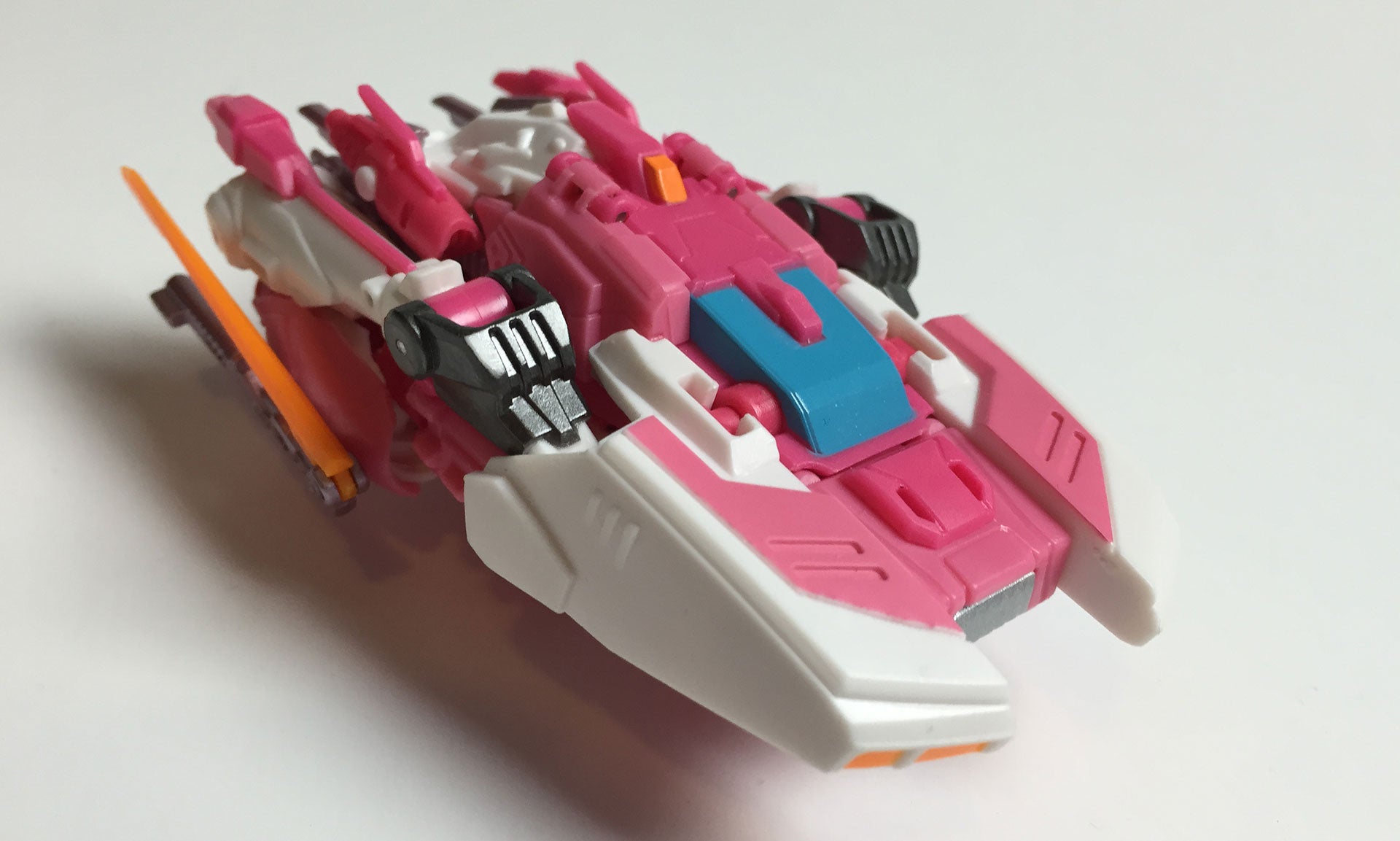 While the figure’s many joints make her harder to Transform, Azalea’s hovercraft form is actually quite solid once you get there. Despite my fumbling fingers, Mastermind Creations has captured the essence of a graceful figure that just-so-happens to become a sturdy vehicle when she’s done shooting and stabbing you in the face.

All in all I’m pretty satisfied with my first choice in third-party robots, so much so that I’ll be preordering the next fembot in Mastermind’s Reformatted collection, Salvia Prominon the Saint. 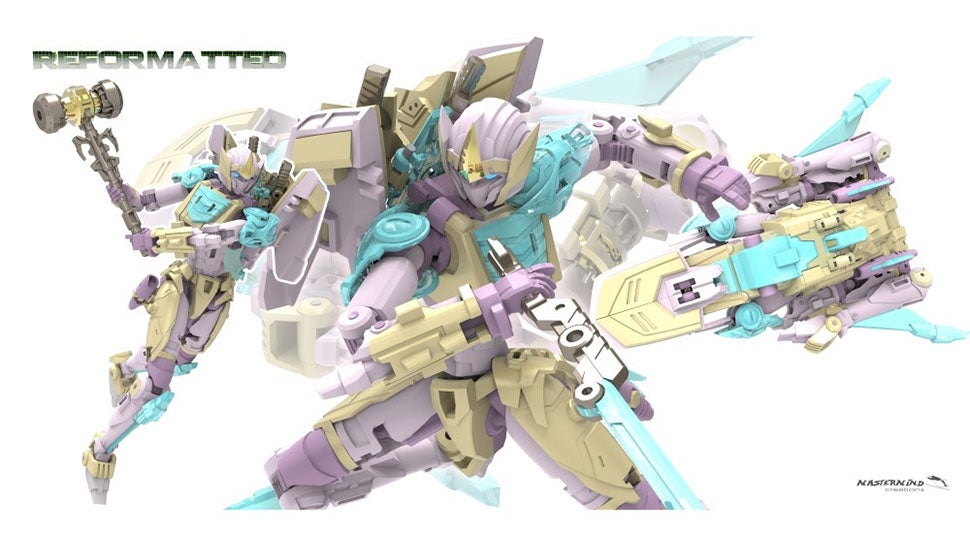 Which leads me to the main problem with these third-party Transformers. As warned by members of the Transformers trading Facebook group I frequent, purchasing one of these things is never enough. Azalea was only $US60 of a $US300 shopping spree, and I’ve spent more since.

I can stop at any time. 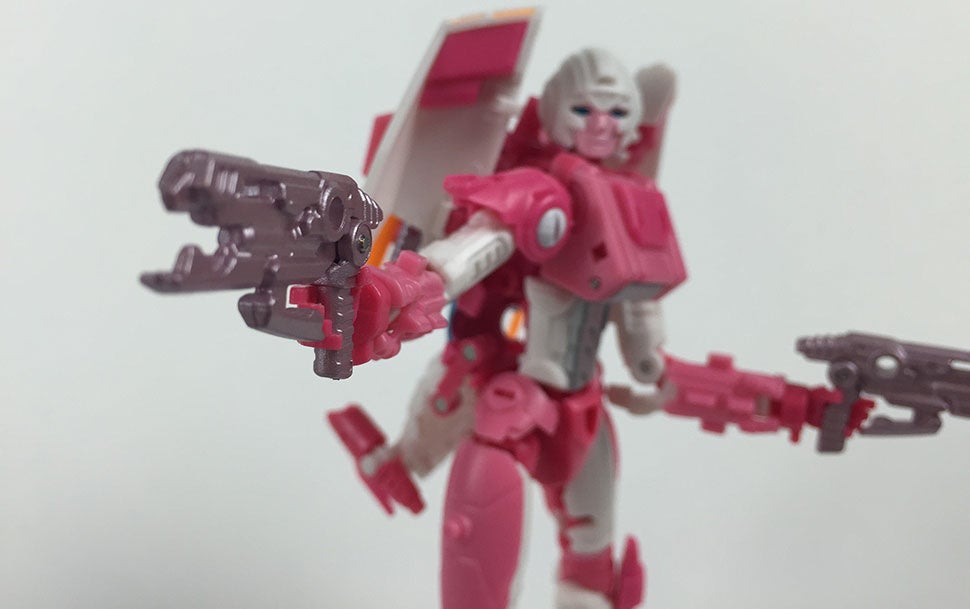 I’ll keep telling myself that.