The Most Unappreciated Platformers Of The '90s

Super Mario World, Sonic The Hedgehog, Crash Bandicoot, Banjo Kazooie — the number of platforming series and characters that rose to stardom in the '90s was notably the highest in gaming history. Truly a golden age. But for every new Mario game there was always a few lesser-known titles waiting in the wings. Those titles deserve some recognition.

That isn't to say that every game out there without a huge fan base is necessarily "unappreciated." Not every game on this list is the cream of the crop, though many are. They are all solid titles that did something notable or had a lasting impression on their fans or developers.

So grab a pack of Gushers and a Capri Sun, because we're heading back to the 1990s.

Back before Ubisoft's Rayman made throwing limbless punches all the rage, there was a little red-headed creature by the name of Plok.

Word on the street is that Shigeru Miyamoto, world renowned Nintendo mastermind, showed interest in the title when it was first brought to Nintendo's attention, but couldn't find the time to work on it due to his involvement with Yoshi's Island. Despite Nintendo's lack of direct involvement in the game, developer Software Creations still turned out a bright and impressive platformer.

Plok is influential for portraying a world, named Akrillk, based on craft supplies and cloth, a concept that Nintendo itself has come to rely on for many games. The game also provided players with power-ups and vehicles, such as flamethrowers and jetpacks, the likes of which had not been seen in a single game. 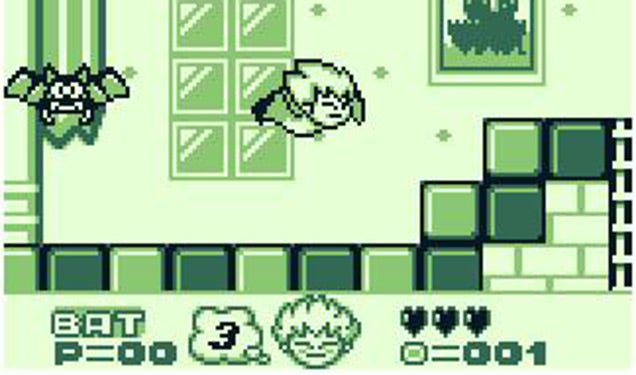 Dracula, lord of the night, master of demons and monsters alike! It's hard to believe he could ever have a child this cute. It's also hard to believe that Kid Dracula is actually an official Castlevania spin-off. But it's true.

The Kid Dracula Game Boy title was a sequel to a Japan-only NES game known as Demon Castle Special: I'm Kid Dracula, which released in 1990. Much of Kid Dracula's charm comes from the fact when Konami made the game to basically poke fun at its own franchise. There are some wonderful callbacks to previous Castlevania titles throughout. Though it's a bit on the short side, much like the game's protagonist, there are few GameBoy platformers that handle as smoothly as Kid Dracula. Bleh! Bleh! 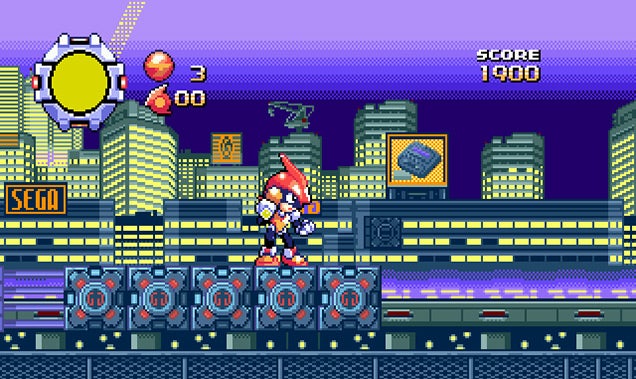 If you're a fan of gaming (and I bet you are), then you've most likely heard of the developer Game Freak. Known far and wide for creating and producing Nintendo's Pokémon games, Game Freak has worked itself into a nice little routine over the last 15 years. But back in the days of yore, they were a struggling up-and-coming studio who just wanted to make a platformer... for Sega.

Pulseman was Sega's answer to Mega Man. While Pulseman's ability to shoot lasers was much the same as that of the blue bomber, he could also change himself into a mobile ball of electricity. This signature move, known as "Volt Tackle," can still be seen in the world of Pokémon today. In fact, many Pokémon have been modelled after different aspects of Pulseman, including Ledian, Rotom, Pawniard, and Bisharp. Not only was Pulseman a solid platformer, it inspired a group of developers to create one of the world's most loved franchises.

Sadly, Pulseman only made it over to the states via Sega's ill-fated (yet strangely ahead of its time) SEGA Channel service. Chances are you didn't get to pick it up. Luckily for you it was released for the Wii Virtual Console back in 2009. 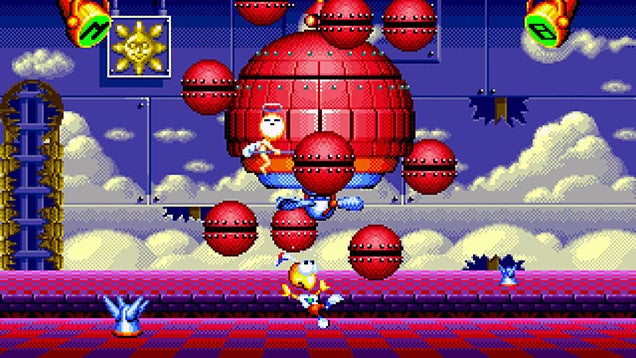 Dynamite Headdy, another hero whose powers stem from shooting off parts of his anatomy, was the third title and second platformer from game developer Treasure Co. Their first title, a platforming shoot'em up named Gunstar Heroes, had been a success on the Genesis in 1993.

Dynamite Headdy's titular character is a puppet with a detachable head that can be used to bash baddies in eight mind-blowing directions. Not to mention the game implemented the ability to power up Headdy by switching out head types. Power-ups are one thing, but swappable heads was a genius way to give players a variety of abilities, visuals and level set-ups. The best part about the game is hands down how fluid the gameplay feels. Even 21 years later, Dynamite Headdy still shines as one of the best Genesis platformers (and is probably my personal favourite). 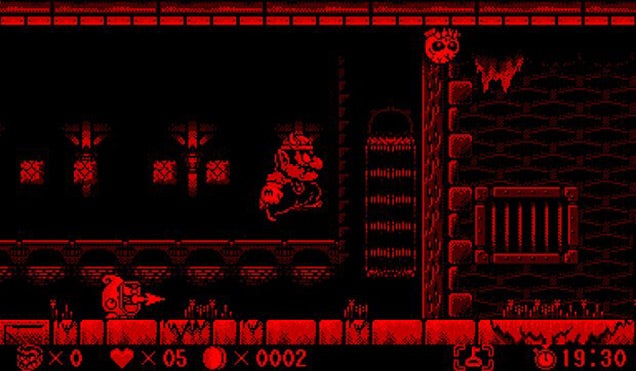 The Virtual Boy is one of Nintendo's greatest flops, if not the greatest flop. Being the best Virtual Boy title is like being the tallest dwarf; it's almost an oxymoron. Even with that in mind, VB Wario Land still manages to be a fantastic side-scroller, not to mention the first one to make its mark in 3D.

Before the likes of New Super Mario Bros 2 and DKC Returns 3D, Wario was the master of the truly 3D platforming realm. Shoulder bumps, silly hats, enemy tossing — all the classic Wario Land signs are here, but it's the level design and the inclusion of Wario's ability to jump between the foreground and background that really make it shine. Due to the Virtual Boy's status as a failed system, the game isn't easy to come by and has yet to be released on the Virtual Console. So if you can get your hands on this bad boy, you better hold on to it. 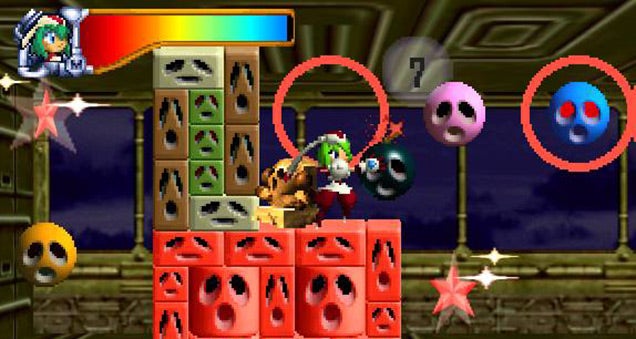 The first Nintendo title from Dynamite Headdy developers Treasure Co., Mischief Makers, was the first 2D platformer released on the Big N's newest console. A surprising fact, seeing as the Super Nintendo had been a hotbed to dozens and dozens of games in the same genre. The draw of a 3D world was just too much for most developers at the time, but Treasure Co. stuck to its guns.

The result was a title filled with personality and creative level design. Most reviewers at the time couldn't get past Mischief Makers' short completion time or lack of difficulty, but the title has gone on to garner a serious cult following. Main character Marina, a robotic maid of all things, even has a catchphrase — "Shake! Shake!" — that is widely known among fans and speed-runners alike. It's not the perfect platformer, but it's still a wonderfully quirky title that kept the 2D platforming flame alive in the late '90s. 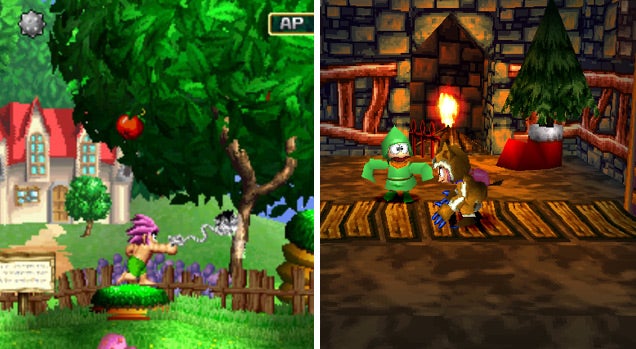 The Tomba titles are most likely the most appreciated of the "unappreciated" titles on this list. The first game introduced the world to the feral, pink-haired, pig-wrestling Tomba, a boy on a quest to retrieve his grandfather's stolen bracelet. The original Playstation was also a well-known treasure trove of 3D platformers, with hits like Crash Bandicoot and Spyro pushing out multiple titles and spin-offs.

Tomba, like Mischief Makers, was a return to form for the world of platforming. The game released in the same year as another classic 2D platformer, Klonoa: Door to Phantomile. And while Klonoa went on to grab many "best of" awards and even a re-make in 2009, the Tomba series fell off the gaming radar. The original Tomba fell short of selling enough copies to be re-released as part of PlayStation's "Greatest Hits," but it did do well enough to produce a sequel.

Tomba 2: The Evil Swine Return was met with much critical acclaim and was decidedly better than the original, but sales were even lower than its predecessor's. Many fans have hoped for Tomba's glorious return to form, or at least a spot on the PlayStation All-Stars roster. 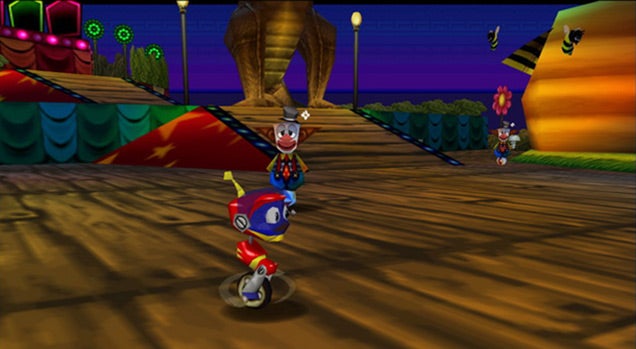 Before Sucker Punch Productions hit it big with series like Sly Cooper and Infamous, they created a platforming title named Sprocket for the Nintendo 64. Unfortunately the name Sprocket was already in use, so the studio was forced to tweak their main character's moniker to simply "Rocket."

Collect items, solve puzzles, open new worlds — the game followed the same route that most successful N64 platformers tended to take in the mid-to-late '90s. What really set Rocket apart from other games, aside from its red cartridge, is the fact that it was the first home console title to feature a realistic physics engine. Everything from vehicles to following bolts had a decided feeling of heft and realism, which was sort of ironic considering Rocket's cartoony theme park world. Speaking of irony, Rocket only has one wheel despite the games title. I guess Robot on Wheel just didn't sound as good.

The '90s were full of titles that have made a lasting impression on millions and millions of players and developers who were just getting their start in the world of gaming. Did I miss a gem that you played for hours on end, or a title that had a winning attitude but less than stellar gameplay? Let me know in the comments below.

Ben Bertoli is a full-time teacher and freelance games journalist currently residing in Indianapolis. He spends his time running, gaming and fighting large enemy crabs. For some reason he is in charge of Kotaku's reader-run TAY blog. Follow his antics on twitter @SuperBentendo.