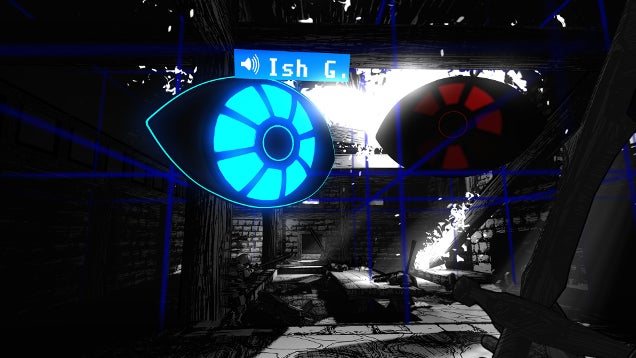 This means that it's unfinished, which is wonderful when paired with the fact that the game is about these things:

"You are the protagonist of an unfinished 1st person fantasy game, trapped in 'development hell'. The designers (played by James Urbaniak, Ashly Burch, and Karen Dyer) are god-like, but so indecisive that they have given you no powers whatsoever. With the help of a mysterious disembodied voice (Stephen Russell) you must seize the tools of game development from these 'gods' in order to explore and master the world, uncovering more of the darkly comic story as you go. Rather than traditional puzzles with a single solution, the incomplete state of each environment is a question that you answer in your own way. By trapping the designers' creations, stealing their behaviours, and re-mixing them to your own purposes - you will either ship the game from the inside ... or cancel it."

It's worth noting, however, that the game is nearly done and already quite good. The Magic Circle is, as its creators put it, "more final than Early Access typically requires," slumming it with its development hell-dwelling brethren so that Thomas and co can see how thousands of players interact with their puzzles and add more possible solutions accordingly. Given that the game is already feature complete and story complete, they only plan to keep it in Early Access for six weeks.

While this is a pretty cool way to use Early Access, it does put players in kind of an awkward place. Do you play the almost completely finished game now and fall on a jagged sword of spoilers for the greater good, or do you wait a handful of weeks for the fully complete version with ever so slightly improved puzzles? It's your call. Me, I'm an impatient jerk and will probably stream some of it soon. How about you?