Bioware's last story DLC for Dragon Age: Inquisition, Trespasser, was released last month, wrapping up the story and providing a mostly satisfying ending (slash segue to the next game). The release of Inquisition's various story DLC packs has been a rocky road, however, leaving the experience feeling disconnected and almost odd for a completionist like myself.

I will preface this by saying that I am indeed a classic Bioware fan, in that I will happily spend hours critiquing the games' flaws and oversights — before loading it up once again for another 100+ hour storyline (see: Mass Effect 3). Let's just say this to start: Bioware, what the hell is going on with Inquisition's DLC?

Warning: Spoilers for all three Inquisition DLCs and the end of the main game may follow.

So let's have a little look at our three story DLCs for Dragon Age: Inquisition. First off, Jaws of Hakkon is announced on March 23, before its release on March 24. Surprise! There's so little fanfare for what is actually quite a large expansion on the main game, but that's not all that was odd about it.

If you were playing on PS4, PS3, Xbox 360 — pretty much anything that wasn't the Xbox One or PC — EA was pretending you didn't exist. The surprise next-day DLC was only for the platforms that Microsoft had paid to have it released for, and everyone else got a hand waving response of "we can not discuss when Jaws of Hakkon will be coming on other platforms".

It was a poor move for Jaws of Hakkon. The Playstation and Xbox 360 releases came on May 26 — roughly a week after the release of Witcher 3, one of the few games than can directly compete with Dragon Age's unique appeal. Jaws gave players a huge, gorgeous area to explore and another amazing dragon battle, but the story felt weak and disconnected. It wasn't nearly enough to compete with Witcher 3's beautiful open world.

I couldn't put my finger on what Jaws of Hakkon was missing until one of the final cutscenes, where the Inquisitor is talking strategy with one of the main characters from the DLC — Svarah Sun-Hair, the Thane of Sun-Bear Hold. More than three hours into the DLC, this was the first time I had seen her face properly. For a DLC that wasn't lacking in interesting stories and strong characters, none of these elements were actually given the involved cutscenes they deserved. Instead, you're left swivelling the camera around, trying to find the best angle to actually look at the characters you're interacting with.

What's more, Jaws of Hakkon was a surprisingly difficult DLC to be the first one released. It has a minimum level recommendation of 20 — for reference, my completionist character ended the game at level 26 after finishing every single quest, while my other character who stuck to the main story quests finished the game at level 18. Even on casual, playing through Jaws of Hakkon on level 18 is punishing. It's possible that the overly hard gameplay was a way to attempt to artificially lengthen the DLC — after all, it did come with the painful price tag of $24.99. Even Dragon Age: Origins' Awakening expansion — which was essentially a whole other game in itself, and potentially even the strongest instalment in the Dragon Age series to date — could be bought for around $20 on its release in 2010.

After the surprise announcement of Jaws, there was silence for a good five months — at least on the single player story front. That ended on August 5, when Bioware announced that Dragon Age would be returning to the Deep Roads, to the collective groans of thousands of gamers who wanted to be anywhere but the Deep Roads. It was released less than a week later for PC, PS4 and Xbox One with not a whisper of timed exclusivity to be heard — but last-gen console owners were now told that they would not be supported for any DLC going forward. Players who had taken their Inquisitors on this epic journey on PS3 or Xbox 360 would now have to buy a new console, a new copy of the game and drop up to $50 on DLC if they wanted to continue their story.

Content-wise, The Descent was actually surprising good. Until it wasn't. Set within a series of new subterranean locations, The Descent was almost a new game in itself. It even had its own 'war table' equivalent, along with a handful of operations that actually opened up new areas to explore — which is what the war table should have been used for all along. Halfway through The Descent, it had me thinking "this is a DLC that fully realises all of Inquisition's potential". There were new characters — with cutscenes! — who had an interesting relationship dynamic that was more convincing than any of the fairly lacklustre romance options in the main game.

And then it ended. The Descent's major boss battle is really difficult. Or really easy. We never quite figured out which one. I was playing through in the same room as my friend at the time, and we decided to 'race' the boss battle. On normal difficulty, I didn't have much trouble at all. My companions used a couple of health potions and a few focus abilities, but the creature died without too much fuss. My friend, on casual, was trying for hours however, often getting one-hit killed for no discernible reason. Turning to Google, I found that people's responses were always either "this boss is impossible to beat" or "what are you talking about, I killed it in five minutes".

Perhaps players are better off not beating the boss, however, as the ending you get after that is frankly baffling. The Descent's lore revelations include some interesting implications for the whole of Thedas, but it seems like the writers never really decided how they wanted the DLC to end, and the script went into recording with 'blah blah blah' still written on the bottom. "I’m leaving with more questions than answers." I'm with you, Quizzy.

A couple of weeks later on August 29, Trespasser was announced. This is the DLC that we had all been waiting for, since the intense cliffhanger at the end of the main game. Trespasser promised answers, finally. Bioware gave this one a bit of build-up, leaving more than a week before releasing it on September 8 — again for current gen consoles only.

Trespasser was a success. It did everything it promised, wrapping up the story of Inquisition almost perfectly and giving closure on a lot of things that the fans had questions about. It brought up major decisions that had been ignored throughout the game — like whether Iron Bull was Qunari or Tal Vashoth, or whether the Inquisitor or Morrigan drank from the well — and even reintroduced the plot point of, you know, that creepy glowing green hand that threatened the Inquisitor's life for the entire game.

The problem with Trespasser is actually how good an ending it is to the main game. I'm not alone in feeling that the ending to Inquisition was incredibly lacklustre. You beat a disappointing main boss (who is actually easier than many of the game's dragons or Florianne, the optional boss of the Winter Palace quest) and then have a party. At said party, the Inquisitor has many options to say 'this isn't over yet', and I felt like it wasn't. I was so ready for someone to attack Skyhold, for Corypheus to come back in his final form and give us one crazy boss battle to end it all. But then the credits rolled. Apparently the foreshadowing was just a way to sell us more DLC.

Trespasser's plot was awesome — Qunari spies and ancient elven lore, what could be bad about that? — but it was somewhat spoiled by the fact that we already know the punchline. The post-credits scene in the main game that revealed Solas's true identity was essentially the hook that would get us to buy this DLC — but its inclusion actually made Trespasser that much weaker. It turned three hours of suspense into three hours of 'come on, when are we going to meet Solas already?' It almost feels like Trespasser was intended to be the true ending to Inquisition, but someone decided that it would make them far more money if they released it as a $25 DLC. 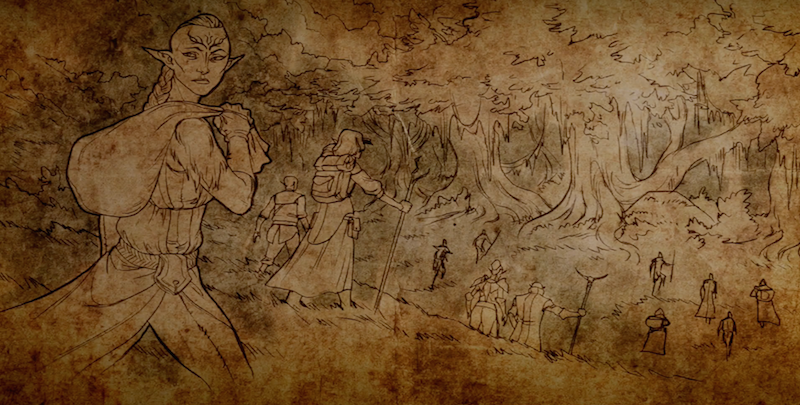 While I enjoyed playing through Inquisition's DLC — some far more so than others — it feels like Dragon Age just failed to get its act together on time. Having such an important ending to Inquisition's story locked behind a $25 paywall (and not available at all to users on some consoles) seems like a poor way to finish the game. Here's hoping Dragon Age 4 does better.