Everyone, Please Stop Freaking Out About That Ridiculous Captain America Reveal 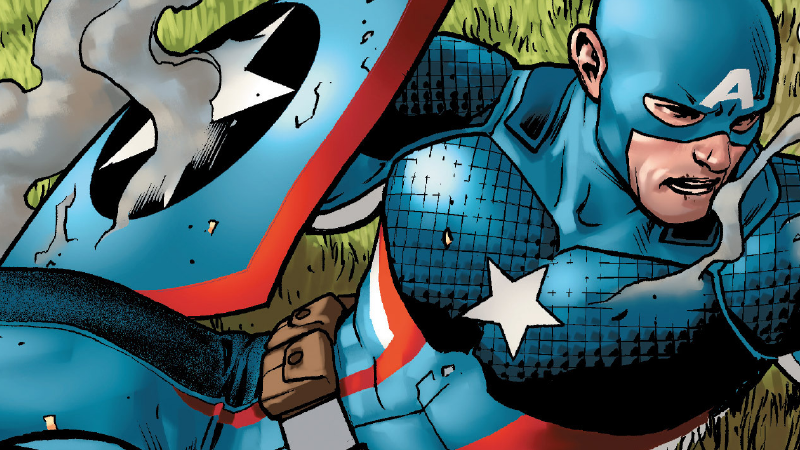 So what's the twist, you may ask? It's not Cap's shiny new shield, which has a fancy laser cutter on it to make up for the fact that Sam Wilson is still running around with the old Captain America shield. No, it's a twist that, in all honestly you may have already brazenly read on the front pages of Time, or Entertainment Weekly, or the AP (because screw courtesy, right?), but yes, SHOCKING NEWS: Steven Rogers has secretly been a Hydra Agent all along!

The gagged man is Doctor Selvig — yes, the one from the movies! I pretty much had his facial expression when I read this page too.

Yes, this is the shocking moment that comes from the very end of today's Captain America: Steve Rogers #1, the new Marvel ongoing series that picks up with the newly-rejuvenated (if you haven't kept up, Steve's spent the past few years being a wrinkly old man with no superpowers, hence why Sam Wilson, AKA The Falcon, took on the Cap mantle) Steve Rogers, once again Captain America, taking the fight to his oldest foes.

Except they're actually his oldest friends. This first issue tells two stories: the first being the modern-set adventures of Steve, joined by his girlfriend Sharon Carter, and C-list patriotically-themed heroes Jack Flag and Free Spirit (remember Jack Flag's goofy boom box laser gun? It doesn't matter any more, Steve throws Jack Flag out of a plane at the end of this issue, because he's secretly super eeeeviiiiillll) as they try to root out the Red Skull's resurgent Hydra, which is tapping into the very timely themes of youth unemployment and immigrant-hating to drive recruitment for a new era of the terrorist organisation.

The second is the framing device, set in 1926, which reveals that after a chance encounter with a woman who saves her from her abusive husband, Steve's mother Sarah is wooed into joining Hydra in its earliest days — setting up that young Steve simply followed in his darling mother's footsteps as an agent of evil, playing the long con of being the most patriotic hero in America for three quarters of a century.

Admittedly, I do love the thought of a pamphlet emblazoned with something as blatantly evil as the Hydra emblem ending with "Concerned Citizens Welcome".

It's as silly as it sounds. No matter what Marvel Editor Tom Brevoort has told the press today about this being planned since Spencer began writing Sam Wilson: Captain America in 2014, or how this will all make sense if you go back and read 75 years of Captain America comics, this is a gimmick with no shame. The shades of The Winter Soldier's SHIELD/Hydra twist — or even the original Winter Soldier story arc itself, alongside the oodles of "hero was secretly evil all along" stories that have come before this — should prevent anyone from seeing this as some sort of lasting change to the character.

To be fair, I'm certain Marvel will do something fun with it — this is hardly the first example of comics doing something inexplicably goofy for the sake of catchy headlines, and had a ball with the aftermath. Comics are built on gimmicks like this and playing with them. I'm looking forward to seeing where Nick Spencer and Jesus Saiz take this plot line. It's always exciting to be at the start of something completely ludicrous, and just see where it goes — because this is definitely right up there in the "ludicrous comics nonsense" category. I look forward to Steve Rogers eventually being revealed as a quintuple agent or something.

But please, let's not pretend this is real, or permanent, or won't be utterly undone in a story arc or two. After all, Steve Rogers has more movies to star in soon.