When Cartoon Network finally announced Justice League Action, the long-rumoured new series that would face the daunting task of following up on the iconic Justice League/Justice League Unlimited, many expected it to take a hard focus on DC’s trinity of Wonder Woman, Superman and Batman. But it looks like the show’s roster will be wider and weirder than anyone expected. The original teaser art from Justice League Action — which will run in 11-minute episodes and feature the voice talents of Mark Hamill, James Woods and Diedrich Bader — teased an eclectic cast to join Clark, Diana and Bruce, with sketches of Blue Beetle, Green Arrow, Zatanna and many others peeking out of the background. But new full colour artwork that debuted at Kre8tif Conference 2016 over the weekend has revealed our best, blurry look yet at even more heroes and villains that will appear whenever the show actually starts airing.

It’s not the best look, but we can still make out a few obvious (and less obvious) characters here. Here’s a zoomed-in version of just the art: 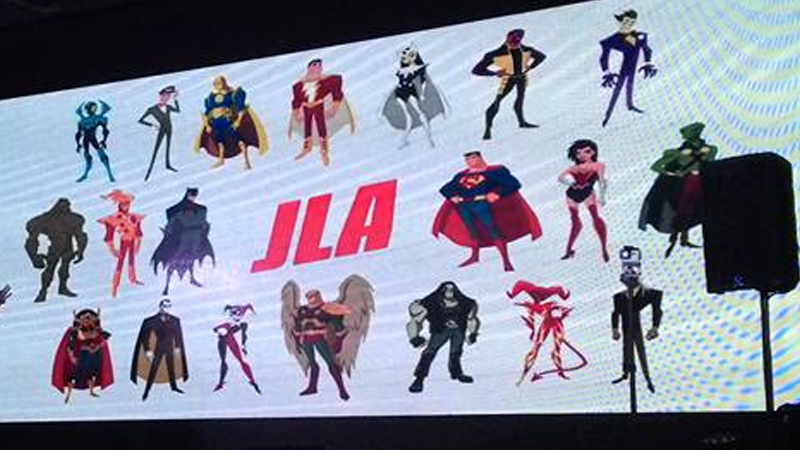 There’s some more obvious characters you can spot there — Batman, Superman, Wonder Woman, Joker, Harley Quinn, Lobo, Martian Manhunter and Shazam, to name a few. Then some cool surprise additions like Doctors Light and Fate, the Jamie Reyes Blue Beetle, Big Barda, Firestorm and what might be Swamp Thing on the far left of the second row. But there’s definitely a few in there that we can’t quite put our fingers on. If you can identify some of the mysterious figures, let us know in the comments!