So you just bought a new Virtual Reality headset. Oculus Rift, HTC Vive, whatever. You’ve plugged it in, adjusted the cameras, cleared out some room, and you’re ready to play some games. Which are the best?

While it’s true that a lot of people are (probably wisely) holding off on buying VR headsets until they’re cheaper and have more games, there are plenty of you out there who have bought a Rift or a Vive and are looking for things to play. We have some recommendations.

This list will work a little bit differently from our other “Bests” posts. We’re keeping it small to start with, and are only including complete games. (We’ll also include a list of promising early access games at the bottom.) Given that most Oculus store exclusives can be played on a Vive thanks to the Revive project and most “Vive games” will ultimately work on Rift with Oculus’s forthcoming Touch controllers, we’re not separating them into two lists. We reserve the right to revise our approach in the future, but think this will work best over the long run.

We’ll be updating this post frequently over the months and years to come, and are always happy to hear which games you think we should consider for inclusion. For now, here we go. 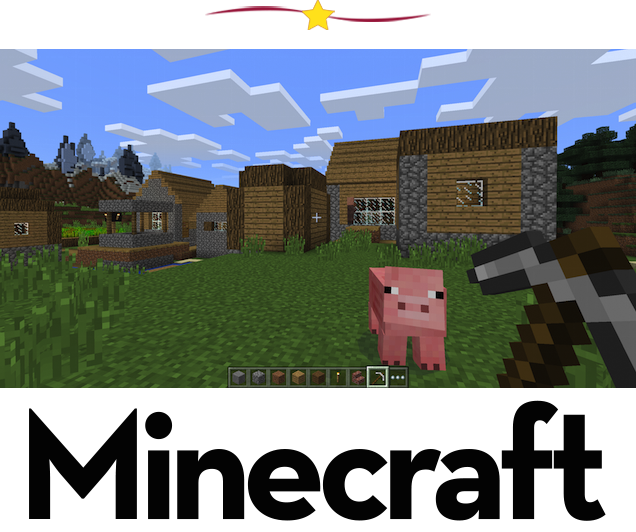 What more can we say about Minecraft? It’s Minecraft. You know it, you’ve played it, and your kids (or nieces/nephews) probably play it, too. Turns out Mojang’s wonderful world-creator is one of the most impressive, immersive VR games available. It’s easy to get working with a headset and particularly impressive to play it standing up with VR controllers like the Vive’s wands. 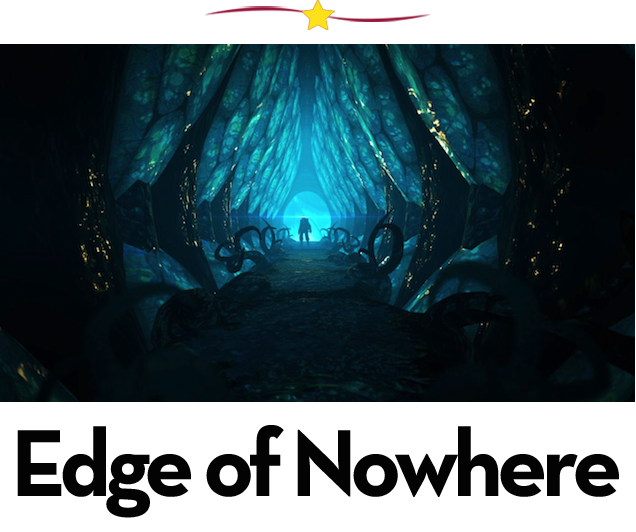 In one sense, Edge of Nowhere is a standard third-person adventure game in the vein of Uncharted and Tomb Raider. But by making you into the camera, it lets you appreciate the sense of scale as your intrepid hero makes his way through a frozen, treacherous Arctic wilderness in search of his wife’s lost expedition. Easily one of the most polished and complete of the first round of VR games, Edge of Nowhere is worth playing for the spectacular vistas (and towering monstrosities) alone.

A Good Match For: Fans of action-adventure games, anyone looking for an exciting, lovely-looking game that gets right to the point.

Not A Good Match For: Those looking for a lengthy or repeatable experience — Edge of Nowhere is pretty short, and once you’ve beaten it there’s not much to go back and do. 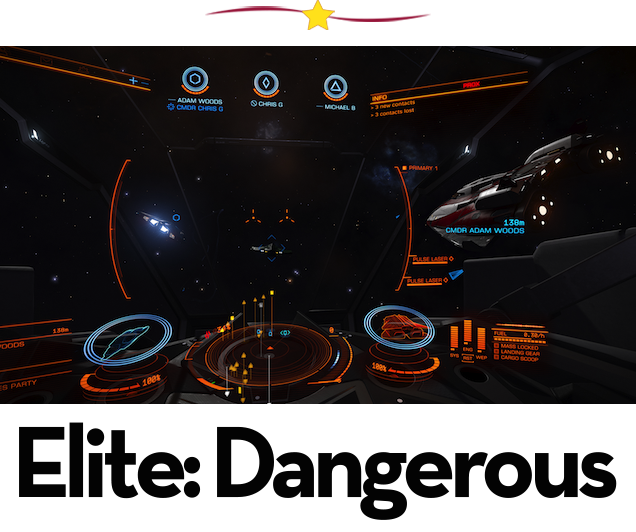 Elite Dangerous has been on VR radars for quite some time now, as beta versions of the game worked surprisingly well with early versions of the Oculus Rift. The finished game, along with its planet-hopping Horizon expansion, works great with commercial headsets. Whether you’re playing as a space trucker, a bounty hunter, or a nefarious space pirate, Elite: Dangerous is an engrossing game even on a regular screen. It’s all the better in VR.

A Good Match For: Space junkies, sci-fi fans, those who’ve wanted to explore the far reaches of the galaxy.

Not A Good Match For: Anyone looking for a space game that’s strictly about combat. Elite: Dangerous has some fun skirmish modes, but the bulk of the game is a slower-paced simulation.

Read our write-up of what the game’s like in VR.

Watch the base game in action. 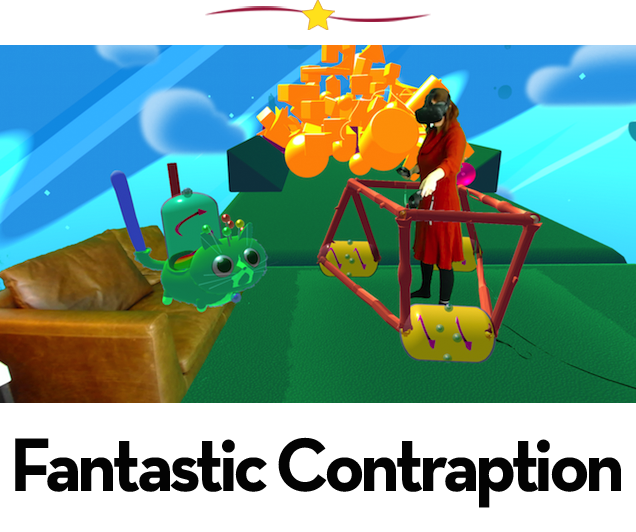 Fantastic Contraption‘s basic concept would work as a simple mobile or browser game: You build a weird object and send it careening toward a goal. To make it work, you have to take the game’s reactive physics into account — a top-heavy contraption might tumble before it reaches its goal, but a lopsided creation might be just the thing to bypass a certain obstacle. It helps that the base game is fun, but the VR implementation is what really makes Fantastic Contraption special. It uses room-scale VR in a way that few other games do, and in short order you’ll find yourself kneeling on the ground like a real mechanic, carefully attaching joints and limbs to your goofy creations.

A Good Match For: Anyone looking for a game to show off what room-scale VR is all about, people who like building things.

Not A Good Match For: Those looking for a game with a deep narrative. 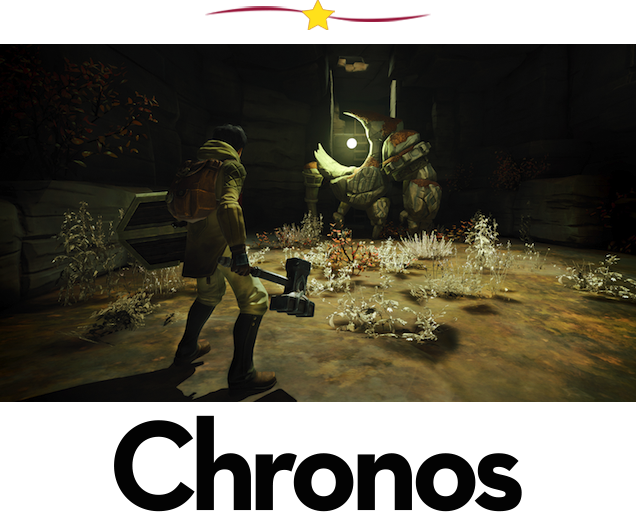 Chronos could’ve simply been a neat action-RPG in the vein of a Zelda or Dark Souls. It has some genuinely cool non-VR ideas, like the way your character ages over the course of the game, or how their stats change with their age. Its VR implementation is neat as well, making your head a fixed Resident Evil-style camera as your character runs freely through the world. While not exactly revolutionary, Chronos manages to be more than the sum of its parts.

A Good Match For: Fans of Dark Souls, Fable or other third-person action RPGs.

Not A Good Match For: Anyone looking for a VR game that makes the most of VR. Chronos puts you inside the game but doesn’t have a lot of VR gimmicks. 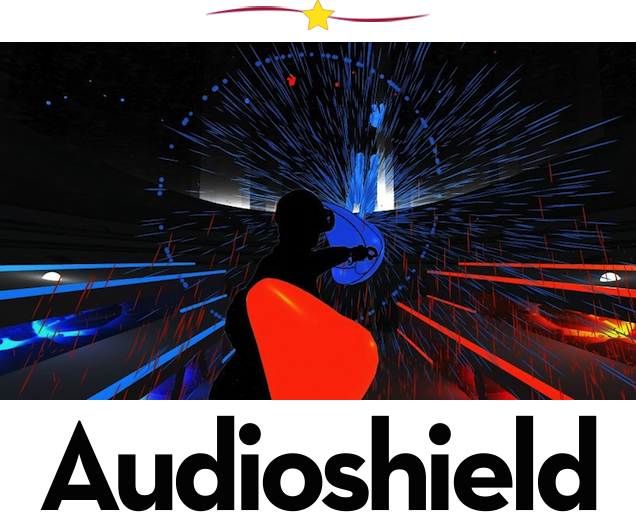 The latest from Audiosurf creator Dylan Fitterer, Audioshield takes the concept of musical battles to VR. You stand on a point and hold a shield in each hand. You must block (or punch) coloured globules before they hit you. Those globules match up to the music in whatever track you’re listening to, which allows you to climb inside your music library and fight your way out. Has the bonus of being a pretty solid upper-body workout.

A Good Match For: People who like music games, anyone looking for a workout.

Not A Good Match For: People who prefer games that don’t make them move around a lot.

House of the Dying Sun: A brilliant space dogfighting game that’s juuust about finished. Just a really cool, clean, and polished game. Watch us play it here. (Rift or Vive)

Space Pirate Trainer: Basically just a target-shooting game, but a very fun one with a killer soundtrack. Watch us play it here. (Vive)

Cosmic Trip: An RTS that lets you build up a small robot fleet and mine an alien planet, Cosmic Trip is one of the most enjoyable, visually satisfying and impressive VR games we’ve played. It’s not fleshed out yet. (Vive)

The Gallery: Call of the Starseed: One of the most interesting narrative VR games, and a promising sign of what adventure game developers could do with the technology. It has some technical rough edges and only one episode, but it’s certainly one to keep an eye on. Watch us play it here. (Vive)

How has this list changed? Read back through our update history:

Update 4/7/2016: We initially had Hover Junkers listed as an early access game to check out when it is actually past its 1.0 release. We’ve removed it from the list. It’s still a fun game! But not an early access one.