2016 Was The Year I Finally Got Into Mobile Gaming

The last time I played mobile games with any regularity was all the way back in 2004. My phone had some kind of proto-Bejewelled game on it, and I used to while away the bus trip home from school inanely matching coloured gems. Before that, it was Snake (or even better, Snake 2!), but it wasn’t long before the simple games and repetitive play lost my interest entirely.

Smartphones and touchscreens opened up a whole new world for gaming, but even when I picked up my first smartphone I never really felt the pull of mobile games. I arbitrarily loaded my new Samsung up with games, of course, the record of which is still in my Google account — Tetris, Angry Birds, Line Runner, Words With Friends. None of them ever got touched. At that point, the draw of the phone’s ever-present internet access was way more interesting than any game I could load onto it.

Compared to the games I was in the process of discovering on my PS3 — Assassin’s Creed, Bioshock, Portal 2 — mobile games were boring, simple and shallow. They were casual games for casual gamers, and not worth my attention.

After more than ten years, 2016 changed all that for me.

It’s likely plenty of people would have had the same experience this year. 2016 is the year that Pokemon GO took over our lives — briefly, perhaps, but oh so notably. For me, however, my mobile gaming Renaissance began with a completely different type of creature-collecting game.

Calling Neko Atsume a game is a bit of a stretch. It’s more like an interactive wallpaper. You buy furniture to decorate a small space, put some food out, and then check back occasionally to ‘collect’ them. The simplicity is what makes it work, along with a formula that gets you checking back multiple times every day.

The same formula sent me straight on to Kleptocats, a similar game where you buy cats and collect items, rather than the other way around. Of course, by this point the app store was full of generic Neko Atsume clones, but Kleptocats took the concept in a different direction, framing it almost as a story to be uncovered as the game continued. It was a little darker and a little funnier, filled with odd jokes and alarming items. Between the two adorable cat-based games, I began to get a little more curious about what other distractions lurked in the Google Play store. As the former apps guy for Kotaku, a lot of the names were familiar, though I had never bothered to pick anything up before now.

I had a brief affair with a trashy clicker game called One Billion Wives, and picked up the simple zen-like Stack for simple distraction.

And then Pokemon GO happened.

For the six months leading up to its release I had started becoming more open to the mobile gaming world, but Pokemon GO just went and changed the definition of what a mobile game could be. It was a hugely popular game, but more than that it was a cultural and social phenomenon. For me, it was the first time a mobile game was something that I would actively plan to play, rather than picking it up to fill time on the train. The Pokemon GO craze eventually died down, as mobile game crazes are wont to do, and successive updates effectively nerfed any ability to play the game on the train. But the aftermath of Niantic’s hugely popular mobile game left me actively searching for its replacement.

I worked through a few of last year’s best games in the intervening months. It turns out that after thinking that mobile games weren’t worth my time for almost a decade, I missed out on a lot of great games.

I made my way through all the levels of the initially-zen, increasingly difficult gardening-themed world of Prune, one of last year’s standout mobile games. Prune is another game that takes mobile controls to their simplest extreme — swipe to ‘prune’ a branch and let the tree grow. It’s the kind of game that could never thrive on any other platform, but still had me enthralled from start to finish.

I picked up another I remembered covering briefly last year, Alto’s Adventure, one of the most gorgeous games I’ve seen on mobile. Before Alto, my mental picture of a ‘mobile game’ consisted of primary colours and toony characters, but here was a game with a vivid colour scheme and stylised mountain landscape that reminded me more of Firewatch than Angry Birds. The actual gameplay is simple — a snowboarding version of an endless runner — but its beautiful day/night cycle and intermittent weather cycles transform it into something almost meditative. Occasionally a snowstorm would roll in and the mountains in the distance would disappear into the haze of the snow — one of those tiny details I never expected to see in a mobile game.

One of my favourite games was one that actually released this year, however: Devolver Digital’s Reigns. While it’s also available on Steam, Reigns is a game that’s uniquely designed for mobile. It’s an odd combination of Tinder and medieval strategy that works so, so well. 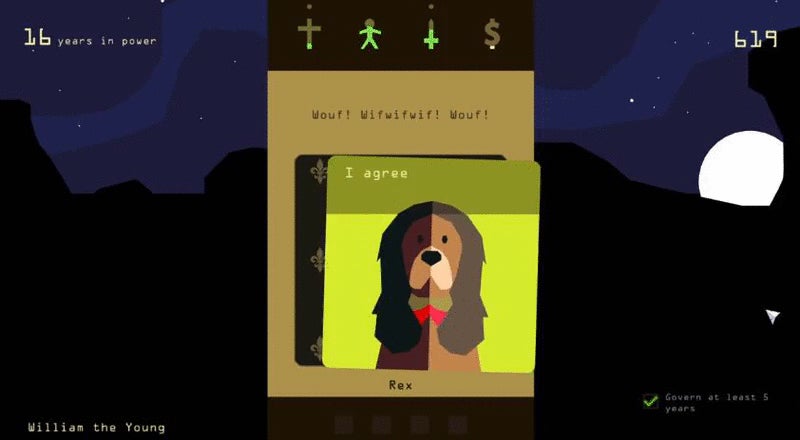 Have you ever heard someone talk about ‘playing’ Tinder? There’s a weirdly cathartic feel to just sitting down and swiping on split-second judgements, even if you’re not really using the app for its intended purpose. The clever thing about Reigns is how it takes that concept and turns it into an actual game, whereby you live and die (but mostly die) by your swipes.

It’s time for me to admit that I was wrong about mobile games, and the games that had me glued to my phone this year helped with that. I’m excited to see what follows in the footprints of Pokemon GO’s groundbreaking (unless you’re an Ingress player) AR gameplay, or what beautiful indies will make my commutes next year just a little more bearable.