Team Skull Are The Best Villains In Any Pokemon Game 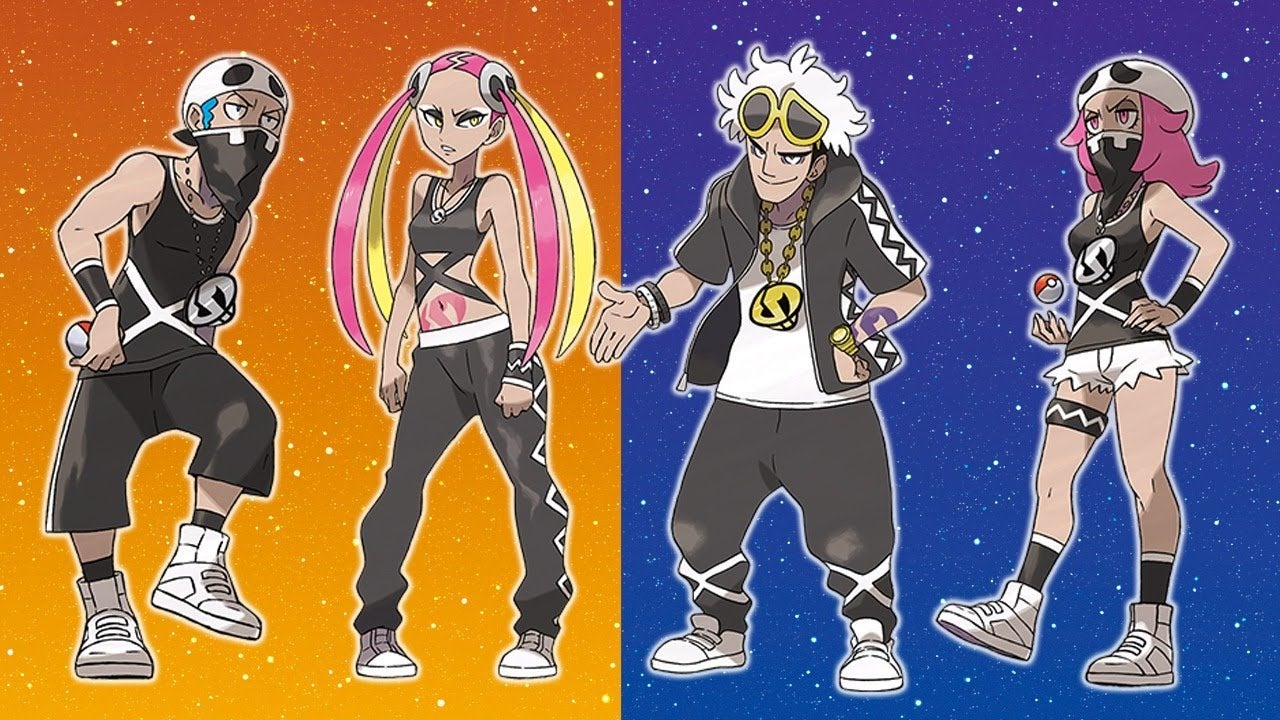 Team Skull are rapscallions who wear all black and adorn themselves with skulls. When I started Sun and Moon, I looked forward to kicking their asses repeatedly. But as the game goes on I realised that actually, Team Skull are the best characters in the entire game.

The goals of Team Skull are kinda vague. They steal Pokemon, I guess? Other NPCs refer to them as "troublemakers", and they definitely hassle you with hostile encounters, but no one really takes them seriously. Early in the game, you stumble upon some Team Skull grunts trying to hassle a farmer, and he outright ignores them while talking to you. After a while, the grunt says this:

The game eventually acknowledges the truth: Team Skull is just very bad at being bad. That verdict comes from the mouth of Plumeria, the team mum of Team Skull:

Shortly after this exchange, you head over to Po Town, where Team Skull has set up shop, and it's the nail in the coffin for any illusions about the threat of Team Skull. Sure they have finally succeeded in stealing a Pokemon — but it's literally a pre-schooler's Yungoos. Once you get to the town to retrieve it, it's been barricaded off, but there's a conspicuously visible path through the bushes to your left. Some members of Team Skull are holed up in an abandoned Pokemon Center and ask you for 10 bucks to heal your monsters because their lights got turned off. They rap this information at you. 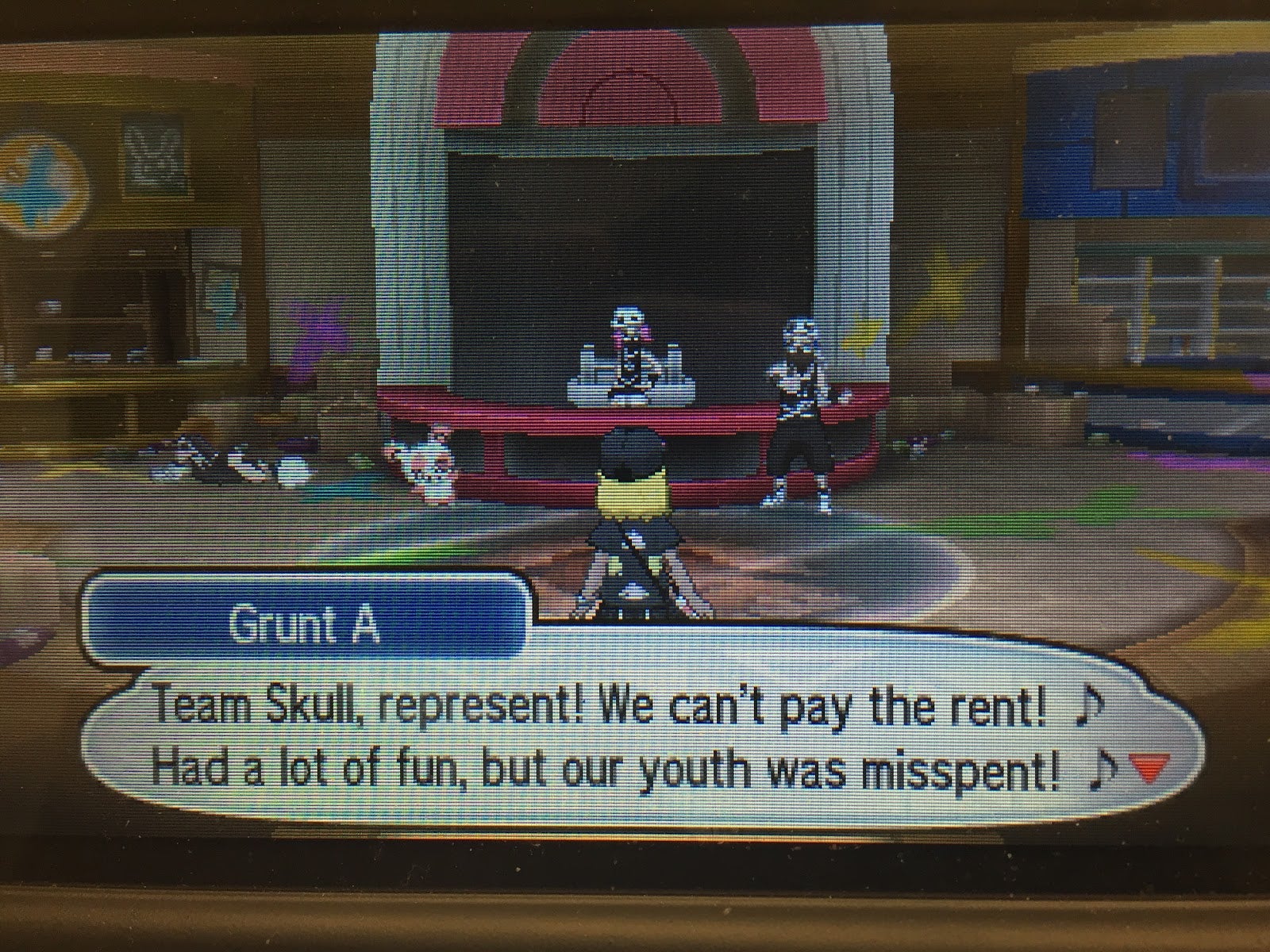 Once you make it inside Team Skull's mansion, they're all having inane arguments and worrying about cute guys and girls. 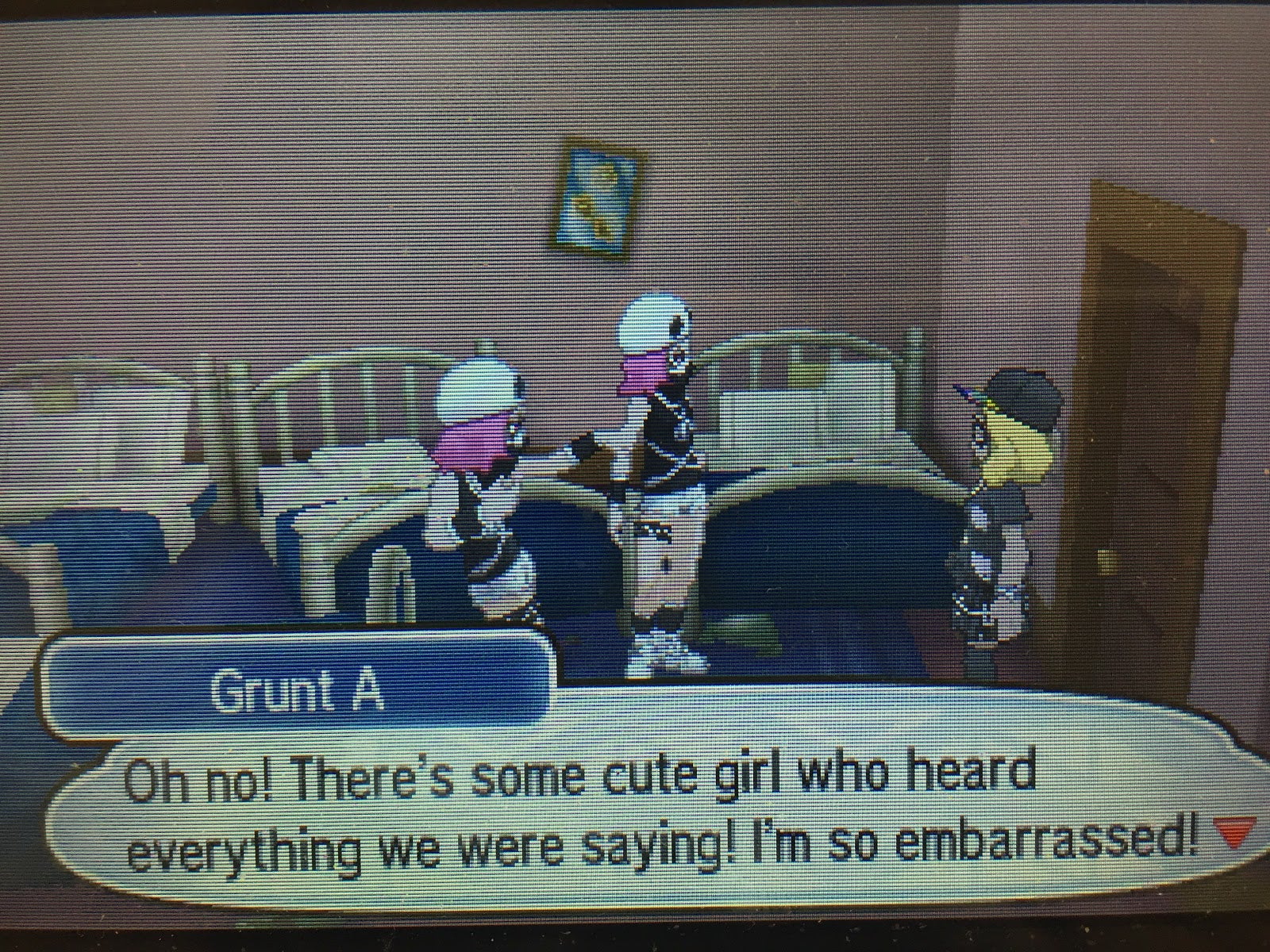 Even the way that you end up talking to Guzma, the leader of Team Skull, is incredibly silly. You have to answer three questions about his favourite things correctly and then when you asked if you're sure, you have to say, "No." I forgot to take a screenshot because I was laughing too hard. Really, the reason why Team Skull sticks together is explained by this NPC just outside of Po Town. 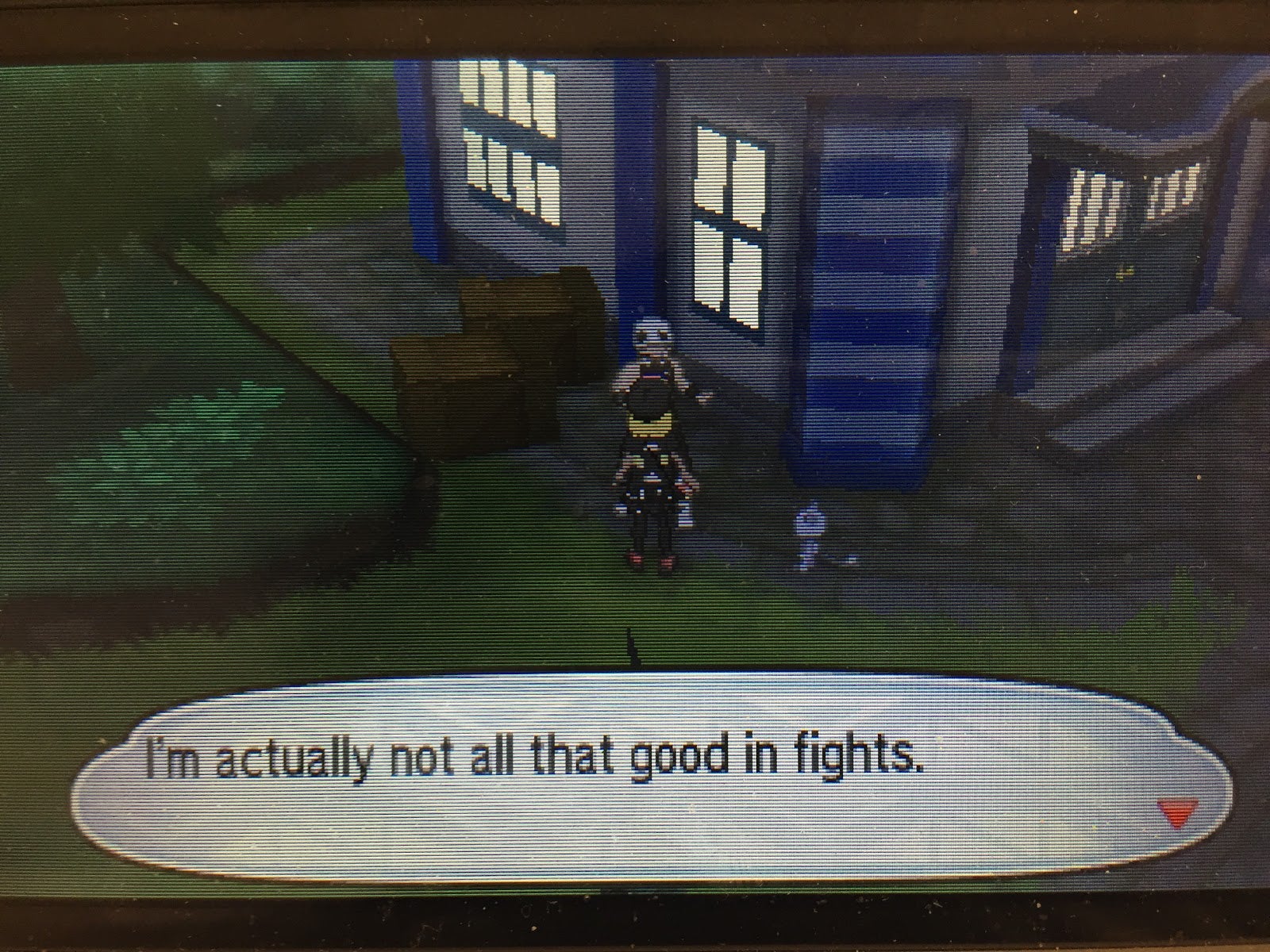 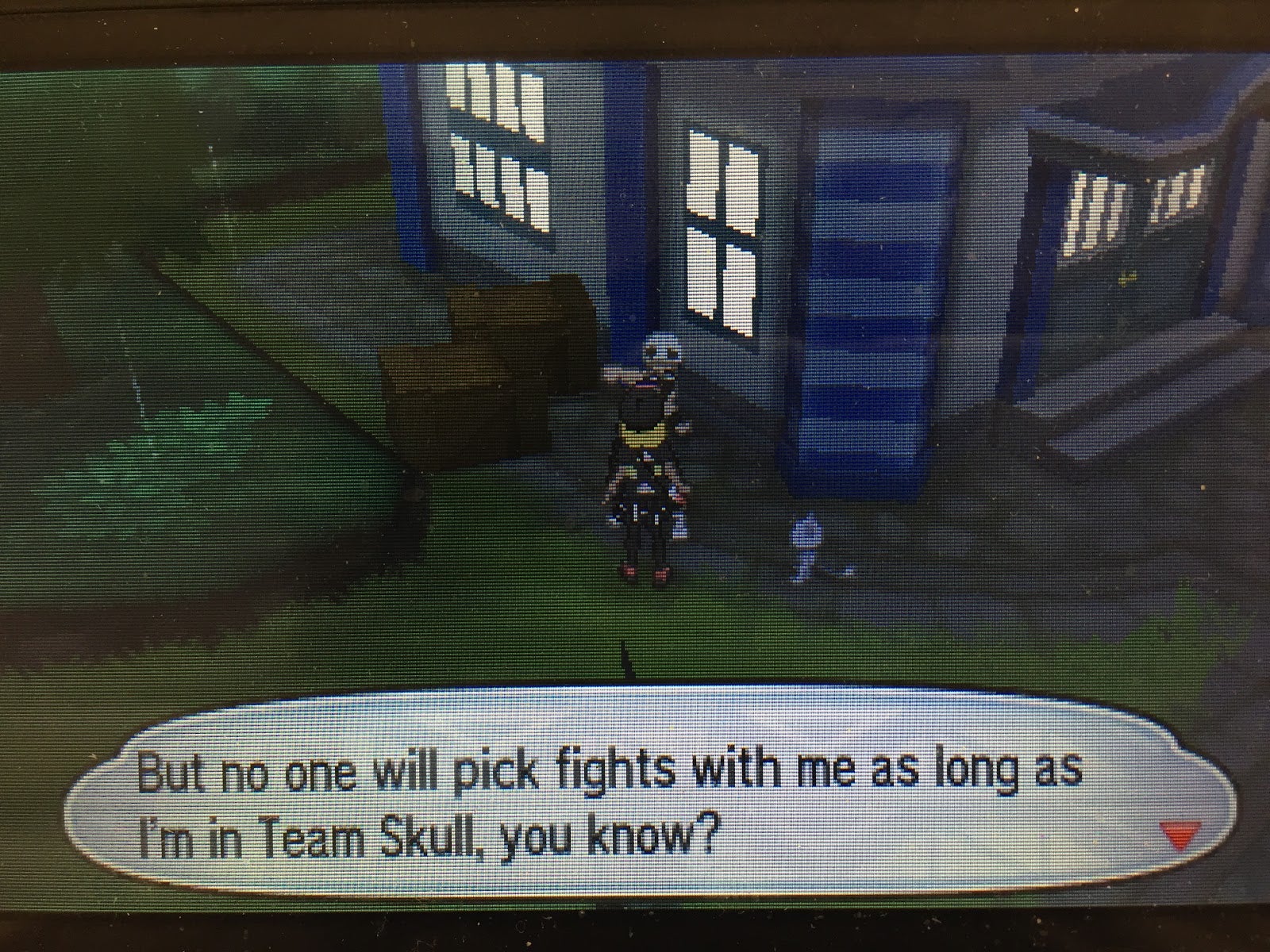 These are just a bunch of dorks who like rapping and want to stick together. In the end, I wanted to join Team Skull. The fandom seems to agree with me:

im ready to join the ranks of Team Skull pic.twitter.com/8Xi1YrjfM9

Can I join Team Skull? They have no goals all they do is annoy people and be bad at everything, I'd be a perfect candidate.

Pokemon fans love Team Skull precisely because they're useless losers. It makes them adorable. All I want to do is make them all hot cocoa and tuck them into their beds, or ruffle their hair and give them pocket money.

And if everyone loves Team Skull, then they especially love Guzma, the king of the dorks. The fandom has adopted, "Its ya boy!" as his informal catchphrase — he does say it at one point to introduce himself. But also, he is my boy. He is my precious boy and I must protect him.

Guzma straightens his life out, going to college and becoming a doctor.
"It's ya boy," he says, handing the newborn child to his mother.