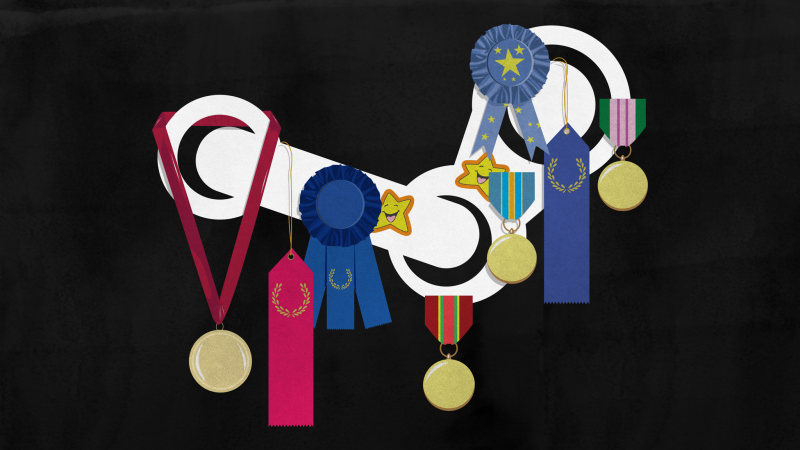 Achievements might be arbitrary indicators that you Did A Thing, but they're still thrilling to earn. On Steam, you can even put achievements on display and turn your profile into a gleaming monument to your accomplishments. Some developers have recently taken to front-loading subpar games with thousands of achievements. Now a single click can have you drowning in achievements, for better or worse.

Steam users call these sorts of games "achievement spam". The games in question might not be very good, but they cough up treasure troves of glittering prizes in, at most, a couple of hours. People can then use these achievements to snazz up their profiles, pushing their "achievement" and "perfect game" numbers into the stratosphere while earning colourful icons they can display on their page. It might not sound like much, but some people really care about their Steam profiles.

Super Duper Flying Genocide 2017 is a simple achievement spam game about beaming tiny people up into a UFO. Successfully doing so ups your in-game level, each of which earns you an achievement — 1002 of them, to be precise. Those achievements' icons look very similar to that of the overall level assigned to a Steam profile for buying games, collecting trading cards, or earning badges, because this game knows exactly what it is. Nearly every Steam review of the game mentions achievements as the only real reason to buy it. The game's forums, hilariously, are overrun with people asking for more achievements to be added to the game. According to SteamSpy, Super Duper Flying Genocide 2017 has sold roughly 100,000 copies. For a tiny, hacked-together arcade game with little in the way of promotional push, that's a ton. Granted, the game only costs a buck, but these things add up.

Another achievement spam game is Blood Feed. The first-person giant insect shooter offers 3001 achievements, all of which you can unlock in 15 minutes or so by wantonly blasting everything that moves. It's a "game" in the barest sense of the word. Blood Feed's developers offer custom achievements, allowing players to go on the game's forums and request achievements with custom images and description text. Those make for especially fancy feathers in avid profile-decorators' caps. Blood Feed's developers know what they're doing: In May 2017 alone, ANPA.US has released three games with over a thousand achievements (and little else) called Survival Zombies, Machine Hunt and Dinosaur Forest. These games weren't popular with reviewers, but they offered custom achievements and actually outsold Blood Feed, which came out at the end of April. Survival Zombies did especially well, managing to move around 40,000 copies, according to SteamSpy.

A video of critic Jim Sterling getting so many achievements from Blood Feed that the game breaks.

Achievement spam isn't an automatic ticket to sales, of course. While achievement spam often seems to correlate to increased sales, other games such as Pain Train 2, Quadrant M4 and Disoriented haven't fared as well, all selling fewer than 10,000 copies months after release and garnering a slew of negative reviews. VT, the publisher of Pain Train 2, told me that it's pulling out of the achievement game altogether. In an email, a rep said that loading games with achievements can "possibly negatively impact reviews due to users purchasing games outside of their normal genres". Others, such as the developer of not-very-good infinite runner Running Through Russia, have modified their achievements in response to feedback from players.

Whether they're increasing sales or not, Steam is seeing a rapid increase in achievement-oriented games. According to Luchaos, a user on achievement hunter community 100Pals, achievements have been on a serious upswing since the end of last year. They provided me with this graph: 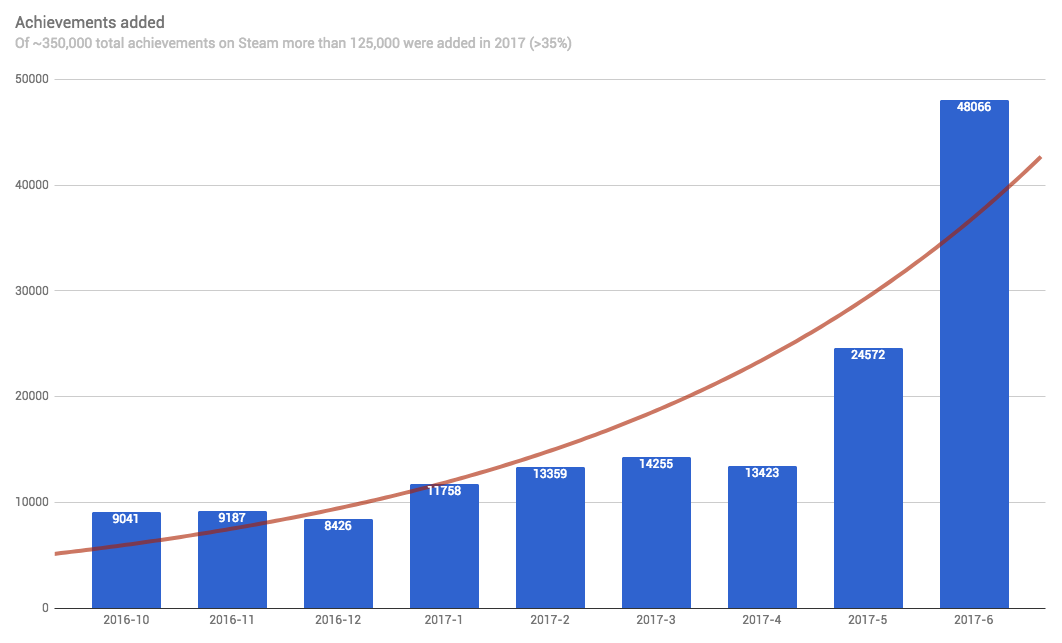 Members of 100Pals, who use a wide assortment of tools to catalogue and track Steam achievements, have compiled a list of 52 games that are widely considered achievement spam (here's a read-only copy of it). A large portion of those games have come out in the past six months, including Zen vs Zombie, the Steam game with the most achievements (10,361). The top number of achievements keeps increasing. At this point, it's an arms race, because having the most achievements of all is the surest way to gain notoriety. Some games, such as the aforementioned Super Duper Flying Genocide, even patched in more achievements post-launch to try to keep up.

Opinions are divided on achievement spam games. Some people, obviously, love them. They want cool achievements for their profiles and don't care how they earn them. Some people I spoke with said they enjoy the way these games subvert the sometimes frustratingly slow trickle of achievements, acting less like a faucet and more like a fire hose. But others feel like these swollen achievement pinatas are obvious cash grabs that cheapen achievements as a whole.

"Getting 10,000 achievements for doing nothing in a game for 10 minutes can easily make a gamer who spent dozens of hours working on a single difficult achievement feel pretty bad."

"Getting 10,000 achievements for doing nothing in a game for 10 minutes can easily make a gamer who spent dozens of hours working on a single difficult achievement feel pretty bad," achievement hunter Xeinok, who founded 100Pals, said to me in an email. "We want games with fun, unique, meaningful, interesting achievements that reward us for our skill and offer us extended replayability by demanding we play the game in a restricted or strange fashion. We want achievements that guide us towards hidden content and Easter eggs, achievements that require out-of-the-box thinking and problem solving."

A review of Pain Train 2. Nearly every game widely regarded as achievement spam has at least one like this near the top.

He also pointed out that achievement spam games could, in theory, be used to circumvent Valve's new trading card policies, which it instituted to combat Steam's "fake game" problem. Developers were selling heaps of slapdash games so users would buy them for the Steam trading cards they dropped; developers would make even more money when users bought and sold the cards on the Steam community market. To put an end to this, Valve added a "confidence metric" to Steam so that games won't start dropping trading cards until an algorithm determines that enough "genuine" users are buying and playing them. Achievement spam games, while generally crappy, draw genuine users — a not insignificant number of which also mention trading cards in their reviews. Check out Tracks of Triumph, for example. "Do it for the achievements and game cards," reads one review. "10/10 would get 388 achievements in half an hour again."

Not all games with a lot of achievements are achievement spam, of course. 100Pals member Deiru pointed to transportation-themed puzzle game Logistical as an example. "We all pretty much like Logistical, and it's not something you can complete in under an hour," they said. "It would take many days, even weeks to complete that." Collaboratively figuring out how to 100 per cent achievement games is part of what brings the community together. But 100Pals users also told me they were fine with certain achievement spam games in addition to the more challenging methods of unlocking achievements. They noted that if you're trying to race to the top of certain player-made achievement leaderboards, achievement spam games are a totally viable tactic. "If you're competing on the leaderboards and that's fun for you," said Xeinok in a Discord conversation, "then you do what you need to compete."