Video Games, According To Horror Movies

The overlap of horror movie lovers and video game lovers is undoubtedly substantial, so it’s no surprise that filmmakers have repeatedly tried to appeal to that demographic. The results often range from hilariously wrong to mildly insulting, to the point where you’re not sure the creators even know what video games are.

When video games are central to the story in an adventure movie, they often play out like a power fantasy. In films like WarGames, The Last Starfighter, and the upcoming Ready Player One, gamers use their joystick prowess to save humanity from destruction.

In horror movies, however, players are lucky if they manage to save themselves, never mind the rest of the world.

I don’t expect the experience of developing or playing a video game to be faithfully translated to the screen. I don’t need total accuracy in my movies, especially in horror movies as they generally require a suspension of disbelief regardless.

Moreover, general audiences don’t care how authentically games are portrayed — an actor can mash every button on a controller with abandon while playing Q*Bert and the average viewer won’t bat an eye.

But if you know better, it’s hard not to see all the egregious errors, stereotypes, and slights.

As a rule, gamers in horror movies are troubled: loners marred by tragic pasts, bloodthirsty obsessives bordering on sociopathy, and all manner of degenerates, ne’er-do-wells, and nogoodniks are the only people who enjoy video games in these films.

Where are the folks who simply like to unwind after a long day at work with a little gaming? It’s true that sometimes a movie plot is just a movie plot, but the message imparted time and again seems to be “games are dangerous and bad for you.”

“The Bishop of Battle” is a segment from Nightmares, an anthology film released in 1983 at the height of the arcade craze, that established the “games become reality” trope that is the standard for the subgenre.

Hotshot gamer/hustler J.J. is obsessed with being the first to reach Level 13 in the notoriously difficult game The Bishop of Battle. J.J. is so consumed by the game that his depravity knows no bounds: his grades are slipping, he steals quarters, he swears at his parents, and finally he breaks into an arcade after closing time to play.

With his Walkman blasting heavy metal in his ears, J.J. fights through levels of the game, which is something akin to a 3D hybrid of Battlezone and Berzerk.

When he reaches level 13 at long last, the cabinet explodes and sprites enter our world in pursuit of J.J. Eventually the cabinet reassembles itself and we learn that J.J. is now the player avatar in the game.

In the end, we don’t know how this all happened. Who or what is The Bishop of Battle? Sure, he tells us he’s “the master of all he surveys,” but is he an alien? An advanced AI? It remains a mystery, but we learn some good lessons: respect your elders and don’t steal.

Arcade and Brainscan were both released in the US in 1994, and each explores what happens when kids from broken families get mixed up in deadly virtual realities.

A childhood car accident killed young Michael Brower’s mother and left him with a permanent limp. His businessman father is never home, so Michael spends most of his time tucked away in his bedroom either consuming violent media or taking pictures of his neighbour in various states of undress.

He runs the “Horror Club” at school and he reads Fangoria magazine, so the hyper-realistic, ultra-terrifying game Brainscan seems right up his alley.

Brainscan, however, is “more than just a game.” In the first level, “Death by Design,” it interfaces with Michael’s subconscious via hypnosis, and when he steps into the shoes of a killer, it’s literal.

“Real? Unreal? What’s the difference?” argues Trickster, the game’s host. (I would argue there’s a huge difference between real murder and fake murder, but maybe that’s just me.)

In Arcade, a group of misfit teens become beta testers for a new game called (wait for it) Arcade. It’s powered by an advanced AI, also called Arcade, that adapts to players’ strategies.

When the kids don their goggles and gloves and, you know, jack into the system, they must skateboard through spiked corridors while avoiding flying chrome skulls called “screamers.” These Lara Croft-meets-Tony Hawk shenanigans constitute but one of the game’s seven levels that players must navigate to reach Arcade’s evil cyberheart.

When her boyfriend vanishes in real life, Alex figures out that he’s trapped in the game world and she must play harder than she’s ever played before if she wants to rescue him — and rescue him she will, for he’s all she’s got left after her mother’s suicide and her father’s subsequent lapse into addiction. 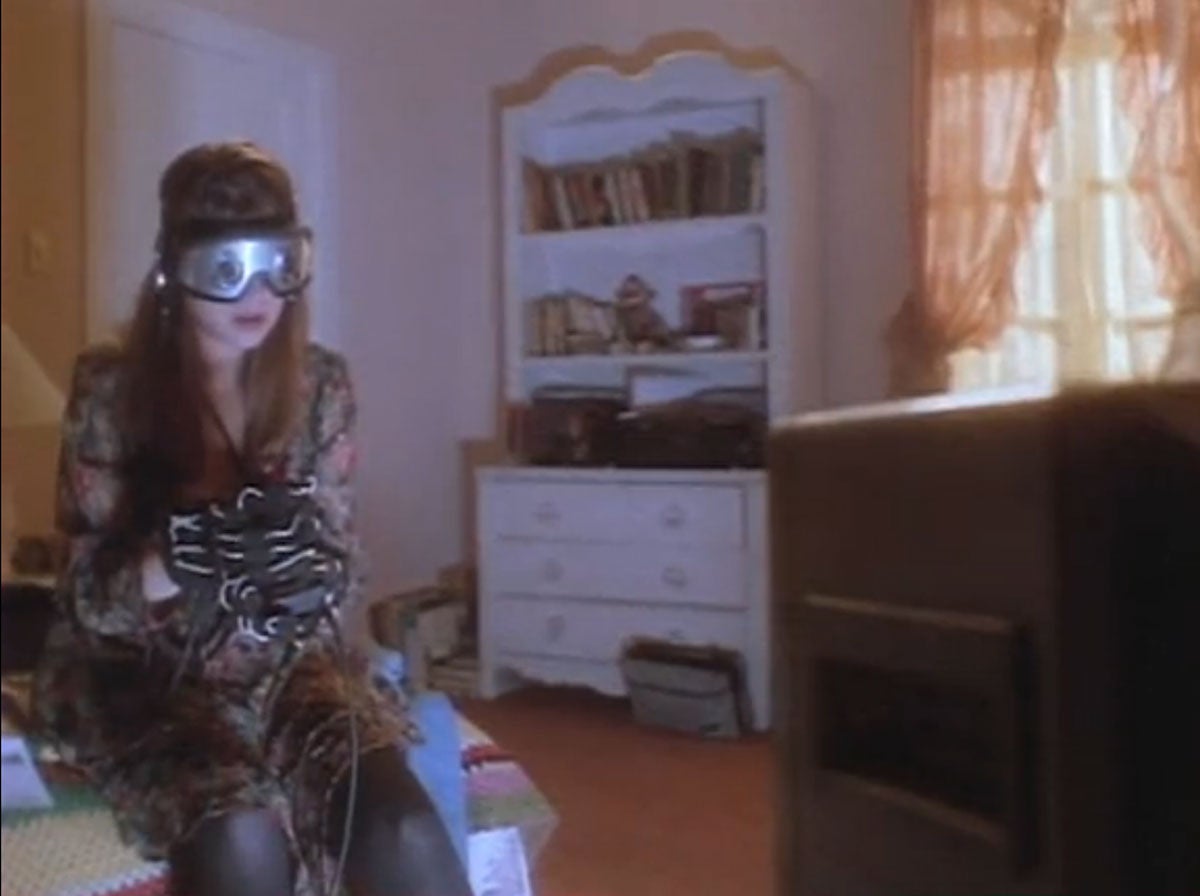 Alex jacks into the system in Arcade

She visits the developer’s headquarters, your typical corporate office complex. It seems there’s only one “programmer” for the game, and as you would expect he wears a lab coat. He didn’t mean to make a homicidal game, of course; that was just an unfortunate side effect from using the brain cells of a dead child abuse victim when creating the AI. And who among us could say they have never made that mistake?.

Lab Coat hands Alex the game “schematics,” a large piece of paper that displays the location of all the keys required to reach Arcade. It’s a shocking glimpse at the 100 per cent true way video games are made.

Gamebox 1.0 rehashed these ideas in 2004 with the story of Charlie, a game tester with — you guessed it — a troubled past. He randomly receives a new console in the mail, which is totally how QA works.

Before you can say “Wait, are you serious? This again?” he’s trapped in the game world but in danger in the real world. I’ve been waiting for Gamebox 1.1 in the hopes that they’d patch in a more original story.

Other horror movies in the mid-2000s tapped into fears of the internet and the world of online gaming. In Hellraiser: Hellworld, an ultra-violent MMO based on the long-running Hellraiser franchise is supposedly so addictive and brutal that a young man obsessed with it sets himself on fire.

When we see the game in action, though, it’s…a web page with a couple of icons to click. As one woman plays, her friend stands behind her and provides helpful tips like “The wall walker’s right behind you!” and “You gotta finesse it!” while showing her how to push a mouse button more effectively. 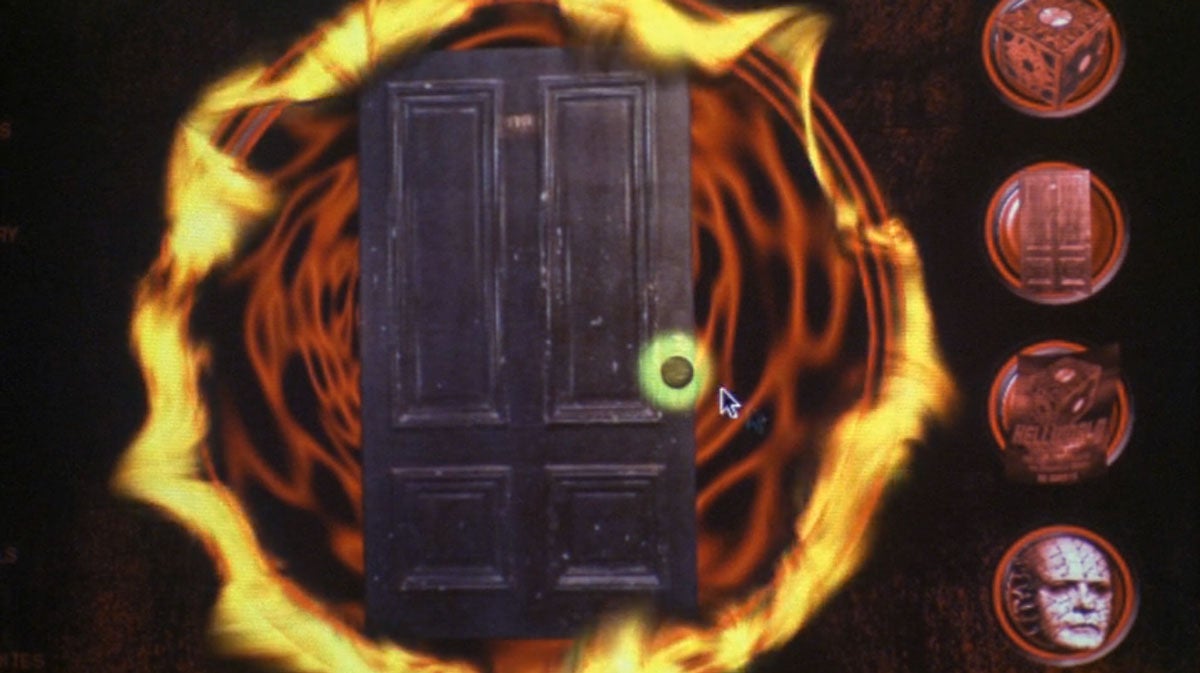 It turns out that the game is simply a MacGuffin that serves to get characters to “Hellworld,” a ragin’ Hellraiser-themed sex party in a decadent mansion in the middle of nowhere. Despite the fact that the villainous Pinhead shows up from time to time to intone “Is it just a game now?” before he offs someone, the game world never melds with reality, nor vice versa.

While it’s disappointing that we never really see Hellworld in action, the dissonance between the way players hype up its savagery and the reality of its point-and-click one-image design is entertaining enough.

It’s filled with ghosts, little girls who want to kill you, and the angry Blood Countess herself, and if I can be honest for just a moment, let me say that I would totally play the shit out of it. Unfortunately, as video game-centric horror movie rules dictate, when one does not, in fact, stay alive in the game, one also stops staying alive in real life.

Needless to say, Stay Alive is not a good movie, but it does get major credit for trying to be authentic. Undoubtedly this is in large part thanks to the consulting work of game designer Cliff Bleszinski.

Characters in the film namedrop Fatal Frame and Silent Hill 4, Game Informer magazine makes an appearance, and none of the characters are disparaged for loving games.

It’s all the more baffling, then, when the other elements of the plot veer off course into nonsense. Why claim that Elizabeth Báthory, an actual historical figure, committed her atrocities on a plantation in Louisiana when she actually lived in the Kingdom of Hungary in the early 17th century?

More to the point, we never learn who or what is behind the game, which appears out of nowhere. When the characters finally break into the walled-up tower in which Báthory died, they find reference material and drawings.

The only logical conclusion, then, is that the Blood Countess created the video game herself as some way to exact revenge for being sentenced to death. She must have spent her years in seclusion learning to make games via online courses, sending out CD-ROMs to beta testers, and emailing press releases to Game Informer.

At the end of the movie, Stay Alive is released for PlayStation 2 and is the hottest thing in gaming, making Countess Elizabeth Báthory one of the most successful indie developers of all time. If I can be honest for just another moment, that’s actually a world I want to live in.