A Goat Made Me Cry In Terranigma

There are many scenes in Terranigma that challenged my notions of morality and how even our well-intentioned decisions can impact a society in ways we couldn’t imagine. It’s arguably one of the most compelling JRPGs ever developed because of those ambiguities, standing as the finale in the Quintet trilogy that includes Soulblazer and Illusion of Gaia.

I wrote a retrospective about Terranigma a few years back and called it the best SNES RPG most gamers never played, as it was never officially released in the States (though it was released in Australia). Three years later, I found myself thinking about the game to the point where I revisited the world. I was prompted in part by Kotaku readers who let me know I missed an important section, and was surprised to discover that the scene provided closure for one of the most tragic moments in the game. 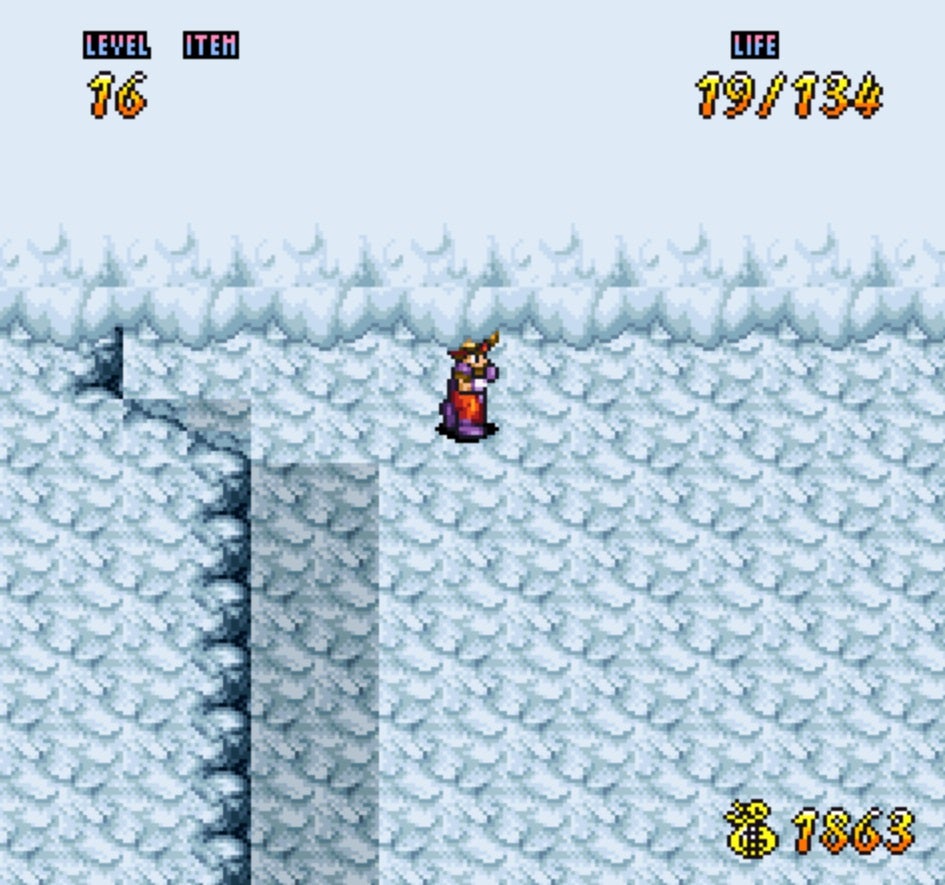 One of Terranigma‘s greatest strengths is its narrative and the way it shows that everything you do, heroic or not, has meaningful consequences on the evolving world. In the early phases of the planet, there are still no humans and you’ve just brought about the creation of animal life. When you enter Tibet and the Eklemata Mountain, you’re faced with one of the coldest areas in the game. If you defeat the Dark Morph at the end, it will trigger the resurrection of all of humanity. So Ark is racing to bring people back when he enters a cave with a slippery surface. Ark slips and crashes into a part of the wall. Unfortunately, this starts an avalanche that swallows him. 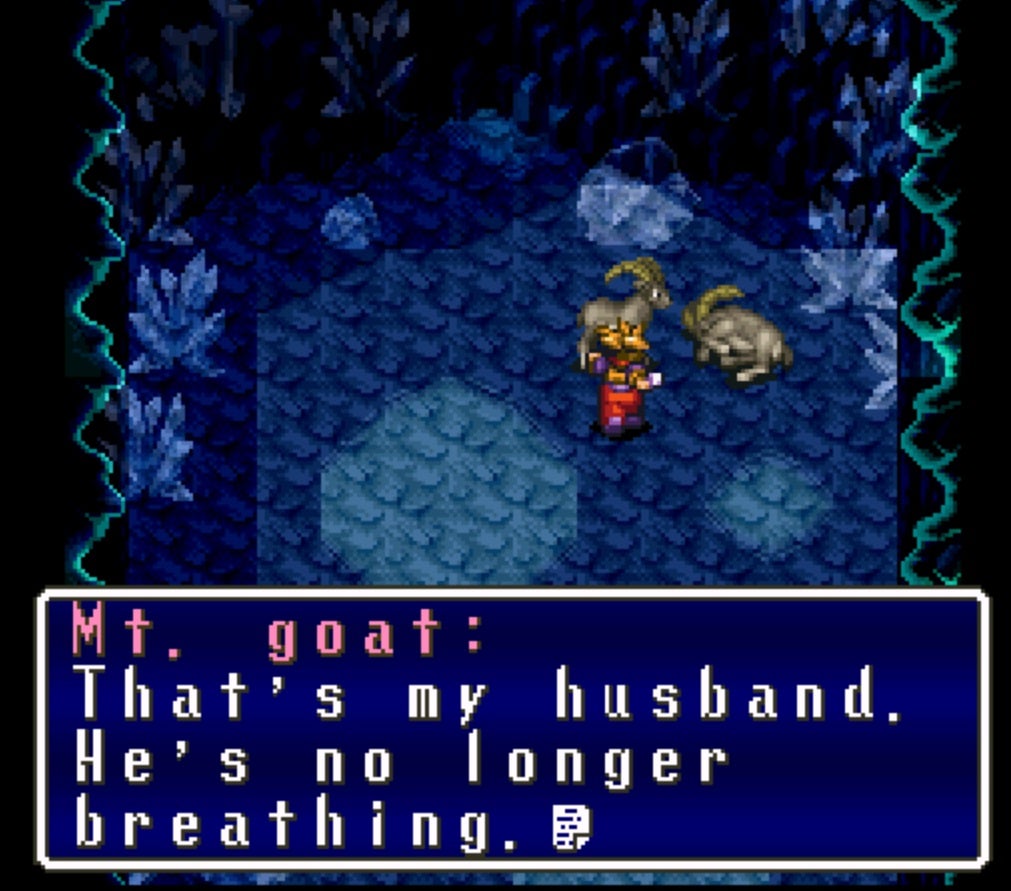 In most games, the avalanche would open up a new area and you’d move your player on. But in Terranigma, Ark wakes up to find a Mountain Goat next to him who asks how he’s doing. Ark jokes that he’s good considering he’s alive. They search the rest of the cave and find another goat that is no longer breathing. Were they friends? The Mountain Goat tells Ark that it’s actually her husband. I could feel the sadness in her voice as she tells you, “There’s no telling fate. Just a while ago, we were running the slopes. It’s too late for tears.”

My slip, which resulted in the avalanche, had caused his death. 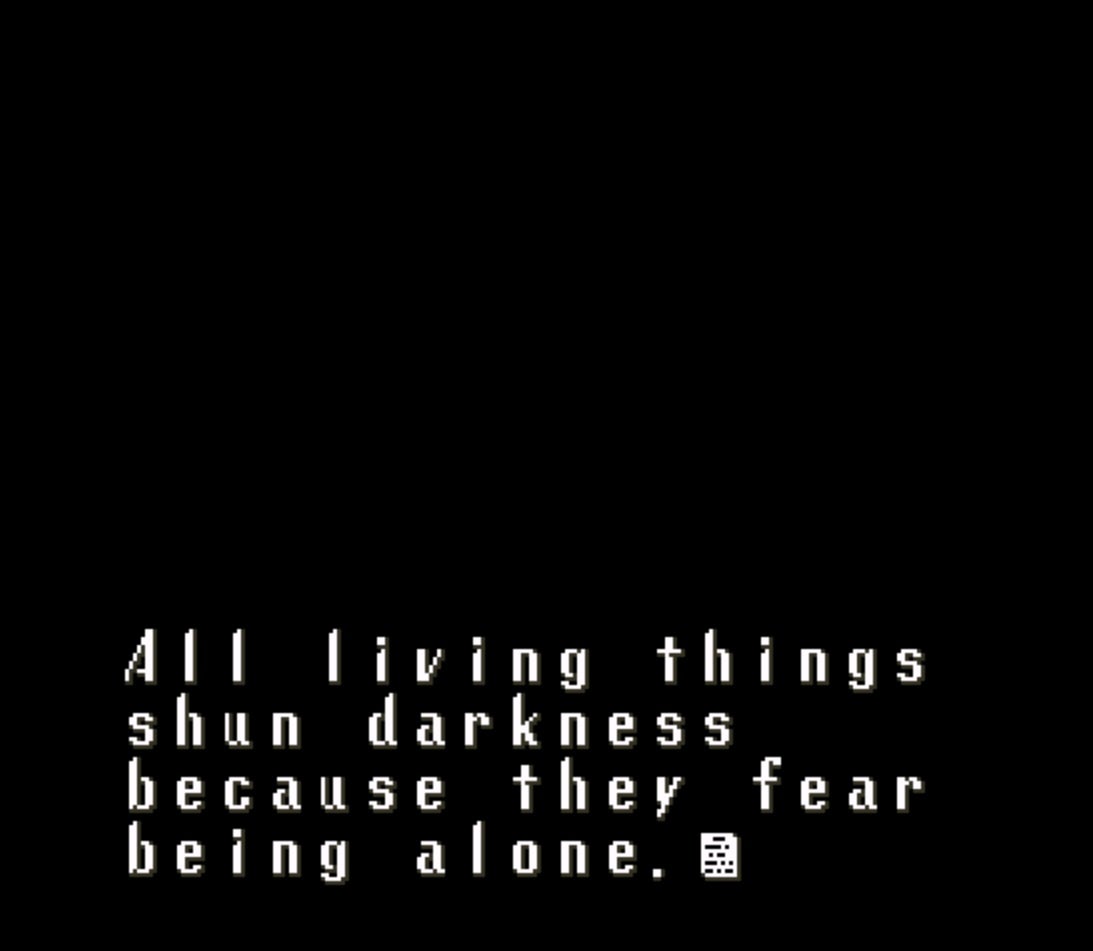 I felt aghast, unsure how to tell her what I’d done through Ark and what form an apology would even take. That’s when the whole cave starts turning dark. Night is about to set and it’s freezing cold. The screen becomes pitch black. There’s no dialogue. And I realised, this is what the Mountain Goat’s husband had experienced in his last moments. Only his darkness was permanent. The moment is poignant in its context, reflected in the game’s absence of visuals symbolising the gravity of the goat’s passing.

The Mountain Goat asks if the dark frightens Ark. Ark replies to the affirmative. Ruminations on life and children follow.

The following morning, Ark is awoken by sounds of the Mountain Goat trying to bash her way through the wall. She asks if Ark is hungry, and when he answers in the affirmative, she offers the flesh of her husband as food. Ominous music plays and I found myself cringing. I wondered again what she would think if she knew my actions had caused his death.

The sacrifice of a goat as food has Biblical roots, and the word “scapegoat”, meaning the unfair penalisation of a person of animal for the sins of another, comes from Leviticus. The goat was the physical scapegoat for my stupid accident. And now his wife was offering him as food to keep Ark alive.

Ark refuses, though the Mountain Goat assures him it’s OK and that it’s part of existence. 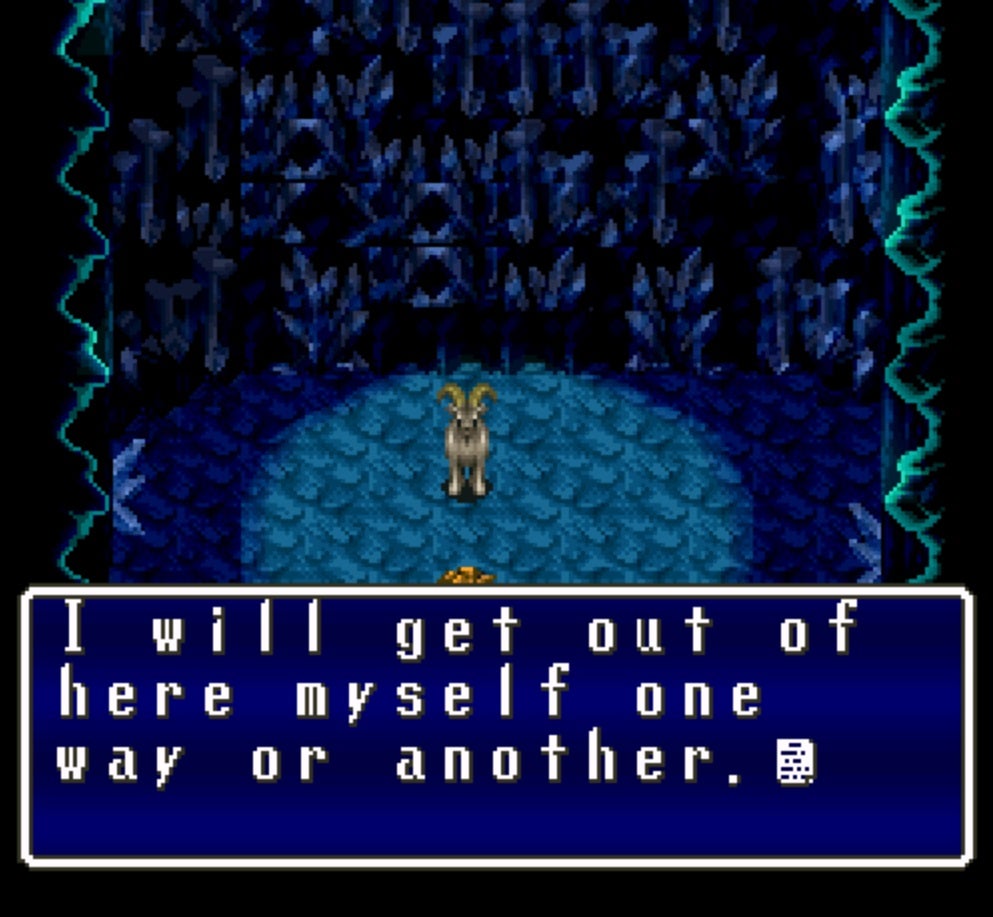 They eventually break free of the cave, only to find themselves at the bottom of a tall cliff. The “Sad” theme plays as the Mountain Goat sees that there’s no way for her to escape. She still urges Ark to go on and reassures him that, “I will get out of here myself one way or another.” When Ark asks her again about what she’s going to do, she insists, “You must continue your journey.”

I was certain the Mountain Goat would somehow find a way to survive. Maybe go out the other way or somehow clamber to the top.

I defeated the Dark Morph and resurrected humanity. But I couldn’t help wonder whatever happened to the Mountain Goat, hoping she was able to make an exit.

Multiple Kotaku readers told me you could actually go back and find out what happened to the Mountain Goat. I tried several times and searched Eklemata, but never could find her.

That was, until I replayed the scene (I have a save file there), climbed up from the cliff, but accidentally fell back down the hole I emerged from. I realised I could do the same at a later point in the game. I loaded my file near the end, trekked all the way back to Eklemata, then found the pit where I’d left the goat.

I was devastated to find the Mountain Goat’s body next to her husband, frozen in the snow. Despite her reassurances, she had not been able to escape. It had been three years since I first played the game, and now, finding their bodies together, I felt so sad. 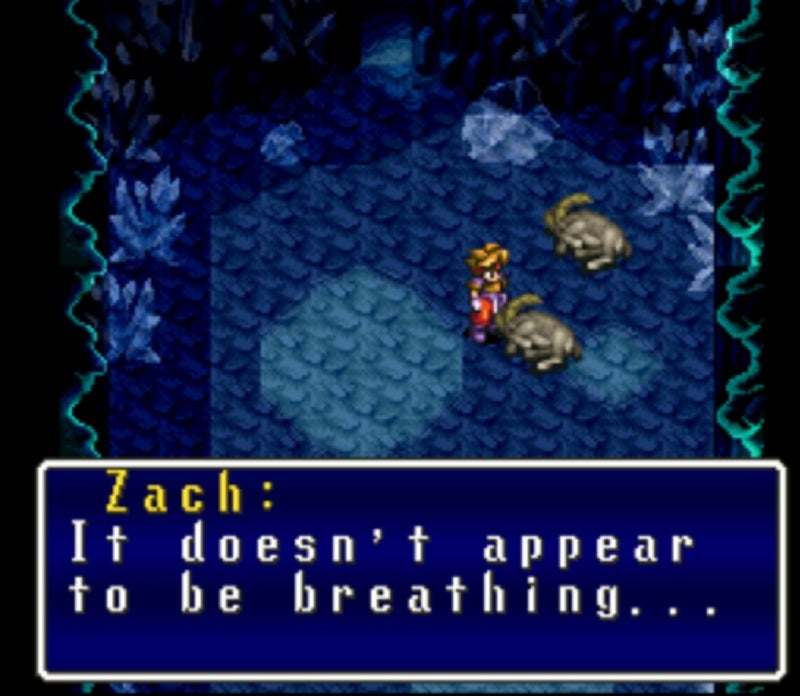 The fact that the developers at Quintet added this optional scene instead of cutting the goat sprites out or blocking off the area seemed cruel. But it only emphasised the personal stakes in the game and how the developers refused to give pat resolutions or unrealistic happy endings. Death can’t be cheated, even in a video game.

Terranigma is full of tragic moments like this, from the twisted machinations of the scientist Beruga, to the guilt-ridden Christopher Colombus, as well as the destruction of the game’s developers, Quintet. Even the ending is a symbolic flight over the planet as Ark prepares for his death and gazes at the world he helped bring back.

Terranigma made me think a lot about life and existence, how painful creation is, and how our choices affect those around us. In my earlier retrospective, I called Terranigma a “a requiem of history and humanity, a dark assemblage of surprisingly tragic events for a 16-bit game that goes beyond the normal RPG tropes… Ark’s impending demise doesn’t fill us with regret, but hope, because the civilisation will go on despite your death and flourish. Terranigma lives on in our imaginations.”

It’s a testament to Quintet’s bold choices that I still linger on Terranigma and mourn those goats.