In MMA, there are fighters who’ve got all the potential in the world, but continually fail to put the pieces together. My heart breaks each time they steal a round from a canny vet, only to be force-fed a diet of dirt and canvas dust in the second.

A slip or two on the way to the top is expected, but after a while, you begin to worry that they will never break through. EA’s UFC series is starting to feel like one of those fighters.

EA UFC 3 is certainly better than the first two attempts. In the octagon, revamped striking feels fluid and powerful, with blood and sweat flying as fighters lithely slip punches and deliver cracking counters.

Outside of it, career mode is more streamlined and less barebones than it’s ever been, following your custom fighter’s climb from the pits of no-name UFC wannabe promotions all the way up to being recognised as the greatest UFC champion of all time. There’s a smattering of other modes too, including Ultimate Team, a cornerstone of other EA Sports series like Madden, NBA Live, and FIFA in which you build a dream team of each sport’s finest.

But none of these features ever feel like they’re reaching their true potential. The game throws out ideas in furious flurries, but fails to land that ever-elusive knockout blow. I’ve had a decent enough time with it over the past week, but none of it’s been particularly memorable.

Let’s start with the combat. Striking feels like no other game I’ve ever played, a dance of distance, timing, and calculated risk-taking that rewards the sorts of tactics you often see employed in the real UFC. Wanna be an aggressive pressure fighter à la Justin Gaethje? Pour points into power, stamina, grappling, and kicks, and go for it. Wanna be more of a counter-puncher, like Conor McGregor or Jose Aldo? That’s doable too.

Or you can be a slick kicker Edson Barboza or a flashy kicker like Anthony Pettis. You can fight from a distance, in the pocket, against the cage — wherever you’re most comfortable, if you’ve got the distance-management skills to pull it off. You can play as and fight against all of those fighters, too, and they move and behave strikingly similarly to their real-life counterparts.

Sometimes it’s the punches you pull that count the most, and I can’t think of another game that’s captured that aspect of fighting so well.

This is a game where individual hits mean something. Throwing and eating blows saps stamina from individual body parts as well as a main meter, and a single solid shot to a winded fighter can put their butt on the canvas. There’s a delicate balance to it all. If you land a big shot and wobble your opponent, you’ve got a window of opportunity to put them away for good and spare yourself the gruelling later rounds of the fight.

But if you go nuts trying to score a big KO, you might just punch yourself out, leaving your fighter’s stamina bar in bad shape for the remainder of the fight. Even so, there’s nothing quite so satisfying as the moments when both fighters just go for it, slipping each others’ punches and kicks by a hair’s breadth and fighting until they’re exhausted puddles.

It’s responsive, too. For me, somebody who’s trained pretty extensively in actual MMA striking, the ability to fake and feint blows — pulling them at the last possible second so as to draw out your opponent’s sloppy counters — is just great. Sometimes it’s the punches you pull that count the most, and I can’t think of another game that’s captured that aspect of fighting so well.

The AI reacts believably, too, falling for your well-planned tactical traps instead of simply rattling off counter-counters with robotic efficiency. I’m less enthused about what happens when fights head to the ground, as they often do in real-life MMA. For one, you can score an improbable number of knockdowns on your opponent in a single round, and they often spring right back up as though they landed on an Olympics-grade trampoline.

In a real UFC fight, three or more knockdowns in a round is an irregular occurrence, symptomatic of wild and woolly wars where one fighter is hanging on for dear life. In EA UFC 3, it happens more frequently, with fighters recovering in just a handful of seconds.

It’s a trade-off that makes back-and-forth battles more likely to occur, but it also strains credulity and sucks the drama out of fights.

Grappling and submissions are EA UFC 3‘s Achilles heel. Unlike striking, which like the real thing is fast, fluid, and responsive, grappling feels sludgy and awkward, forcing you to hold analogue sticks in certain directions to advance position. Unlike actual grappling, which is a cerebral game of creative movement and misdirection, EA UFC 3 represents it as a series of rigid positions with only a small amount of room for improvisation.

I appreciate that the game has a large variety of takedowns and accurately models transitions between positions like full guard, half guard, and full mount. There’s an intoxicating sense of power to methodically slicing through somebody’s guard en route to even a simple submission like an arm bar.

I also dig that, like in real fighting, you can use the threat of takedowns to disrupt an opponent’s striking rhythm. But grappling itself is a fiddly process lacking rhythm or flow. It is, at best, functional, far from the sublimity of striking.

Submissions, meanwhile, use a frustrating system where holds are both applied and denied via a pop-up menu broken up into a series of quadrants. One fighter advances through multiple stages of a submission while the other tries to slip out by filling one quadrant entirely.

It’s also such an abstraction of submission fighting that it feels more like Simon Says than jiu jitsu. Career Mode similarly falls just short of the mark. It’s got a smart structure where you go through training camps en route to higher-profile fights, replacing EA UFC 2‘s annoying training minigames. But it lacks personality. Having now transformed my custom character into the greatest fighter of all time, I can say that I did come to enjoy some of training’s more rote aspects. The grind of balancing fight training and promotion develops into a satisfying routine, even if happens almost entirely in a series of menus.

I never felt like there was any real heat between me and my arch-nemeses.

It’s kinda soulless, yeah, but it leaves room for imagination. At the start of every training camp, I’d hold a fan meet-and-greet at a crappy wings restaurant, and that felt truer to the spirit of my character (/”Eldest Diaz,” fictional half-brother of MMA fighters Nick and Nate) than anything else in the entire game.

As I progressed through camps, Eldest Diaz became notably better. He gained heaps of speed and stamina and learned fun moves like a devastating overhand right, slicing lead elbows, and of course the trademark Diaz brother Stockton Slap. He overcame unexpected curveballs like injuries and short-notice fights.

My efforts in training paid off in the octagon, and I felt like the proud coach and father of a 50-year-old man with a tattoo of a rabbit leaping over two hungry foxes on his stomach.

Career mode’s much-vaunted rivalry system, however, never really amounted to much. The majority of a rivalry occurs within — wait for it — a series of menus, and it mostly just consists of passive-aggressive fake tweets from a fighter who dislikes you more than other fighters for no adequately explained reason.

It was fun advancing through the ranks to the point that my rivals were real UFC fighters instead of pink-haired randos that the game dreamed up, but I never felt like there was any real heat between me and my arch-nemeses. Brief, generic cut-scenes at press conferences and events of the like only made me further lament rivalries’ wasted potential. It all comes off as contrived, a too-safe attempt at replicating the nonstop drama that’s come to characterise the modern UFC. Baseless, one-size-fits-all animosity doesn’t make for a good storyline. In real life and in game, not everybody can (or should) be Conor McGregor.

EA UFC 3‘s other big mode, Ultimate Team, dispenses with the ongoing narrative to focus on building up a squad of four fighters. In other EA Sports games, this mode makes more sense, given that football, basketball, and other football are team sports. But while fighters do often train together in camps, MMA is a solo sport once the cage door closes. The focus of EA UFC 3‘s Ultimate Team, then, isn’t really on creating a perfectly oiled dream team.

Instead, fighters function as blank slates that you can slap unlockable moves and perks onto. You accomplish this by earning points through online and offline matches, as well as a series of challenges, and then you spend points on packs that contain fighters, moves, perks, and other boosts.

This being an EA game, you can also buy points via microtransactions. I never really felt like I needed to spend money, but the randomness of the pack system meant that I never felt fully satisfied with my fighters, either. 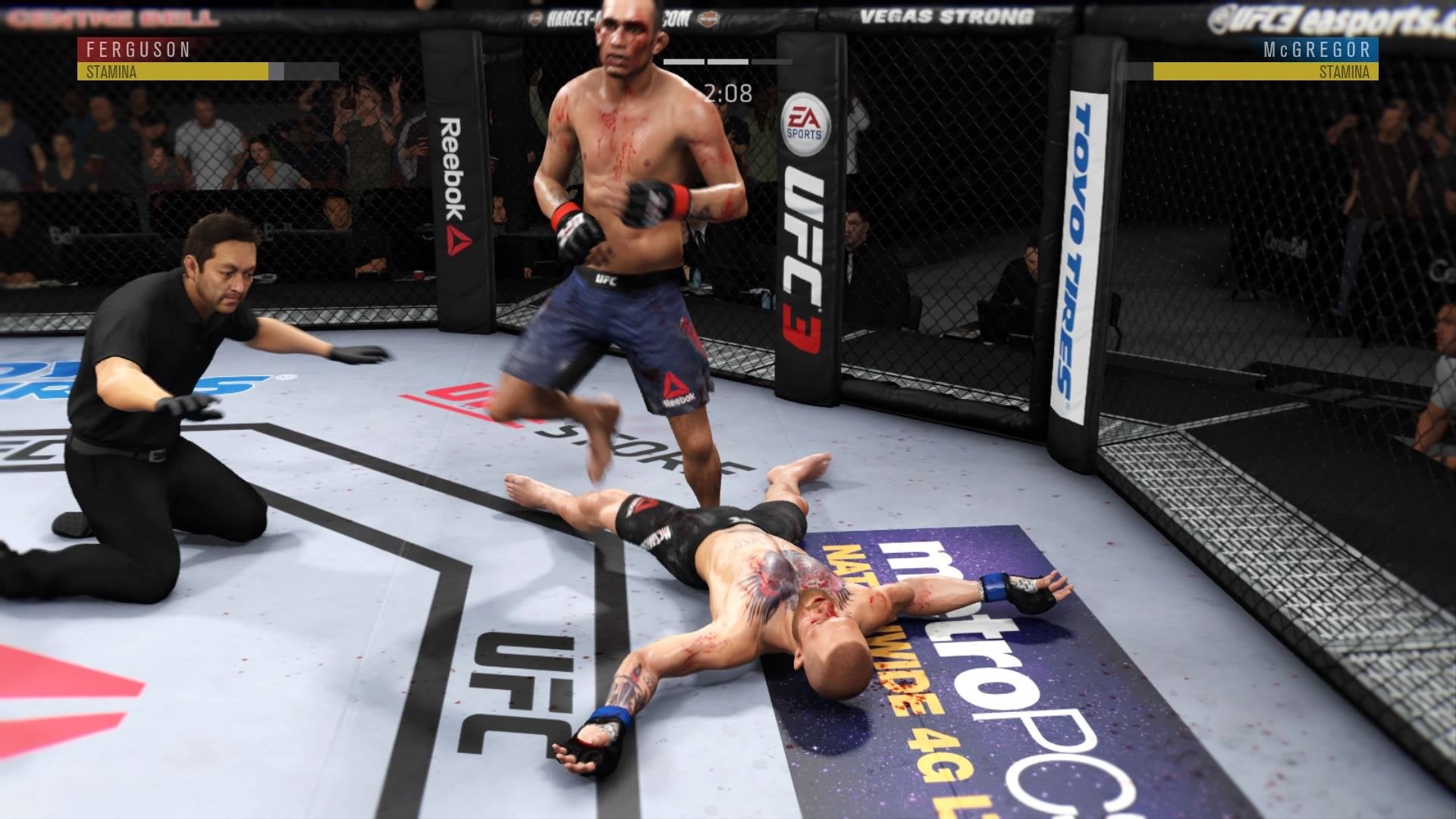 The bigger issue with Ultimate Team is that EA UFC 3‘s take on it lacks the intrinsic appeal of crafting a dream team. After a handful of hours, there’s not much of an impetus to carry on opening packs and hoping you’ll get a cool move.

The career mode progression is more natural and less random, and if you want to play online with other players, you can do so on a more even playing field in online quick fights or ranked championships.

Speaking of other modes, EA UFC 3 has them in spades, but they’re mostly offline distractions, rather than substantial follow-ups to career and Ultimate Team’s main courses. If you hate fighting on the ground, there’s the unfortunately named Stand And Bang mode.

If you despise punching and think grappling is a mark of a more civilised society, you’ll dig Submission Showdown. There’s also Knockout Mode, which creates an interesting challenge by requiring you to KO opponents with a certain number of strikes while suffering through commentary from Snoop Dogg.

EA UFC 3 is closer to nailing this whole UFC video game thing than the comparatively thin EA UFC 2, but while this one has plenty of meat on its bones, it lacks connective tissue. In fight parlance, it’s a solid mid-tier fighter, a gatekeeper to the top rather than a championship-calibre contender.

In short, EA UFC 3 is the Uriah Hall of video games — by most measures a success, but every once in a while you ponder what could’ve been, and you feel a little sad.