The beasts howl, and the hunt is on. That’s how the worst nights begin Yharnam, the world of Bloodborne. And as the game illustrates, and as Ales Kot and Piotr Kowalski wisely remember in their tie-in comic, the worst nights in Yharnam never end.

Video game tie-ins are tricky, and they usually fail. There are a lot of reasons for this, but the core of it is that adapting narrative from video games to another medium is complicated, and it’s easy to miss the story for all the game-y accoutrements around it.

Writing for Titan Comics, Ales Kot (Secret Avengers, Zero) and artist Piotr Kowalski (Sex), don’t make that mistake. Instead, they provide a distillation of the mood and themes that make Bloodborne one of my favourite video games. Whether you’ve played it or not, this is a nightmare worth dreaming.

Starring a nameless beast hunter, Bloodborne #1 concerns itself with establishing the core ideas that animate the world of Yharnam, which has been taken over by a horde of beasts. This is a world about dreams, violence, and the cyclicality of both: The hunter’s calling is to fight monsters, and he does so, Kowalski’s art, with colouring by Brad Simpson, depicting bloody carnage in the shades of fire and sunset. It isn’t clear why he cuts through the streets, and his narration, the crisp simplicity of a noir hero mixed with the mad scribblings of a Lovecraft protagonist, is all despair and confusion. “Does the nightmare ever end?” he asks.

It isn’t clear that it does. After the hunter meets another band of his kind, led by a man who seems to want to put an end to a hunt, he’s killed. He wakes up in a calm purgatory, tended by a living doll, and then he goes right back. To the same fights. The same burning city. The same band of hunters. Like a dream he can’t stop having. 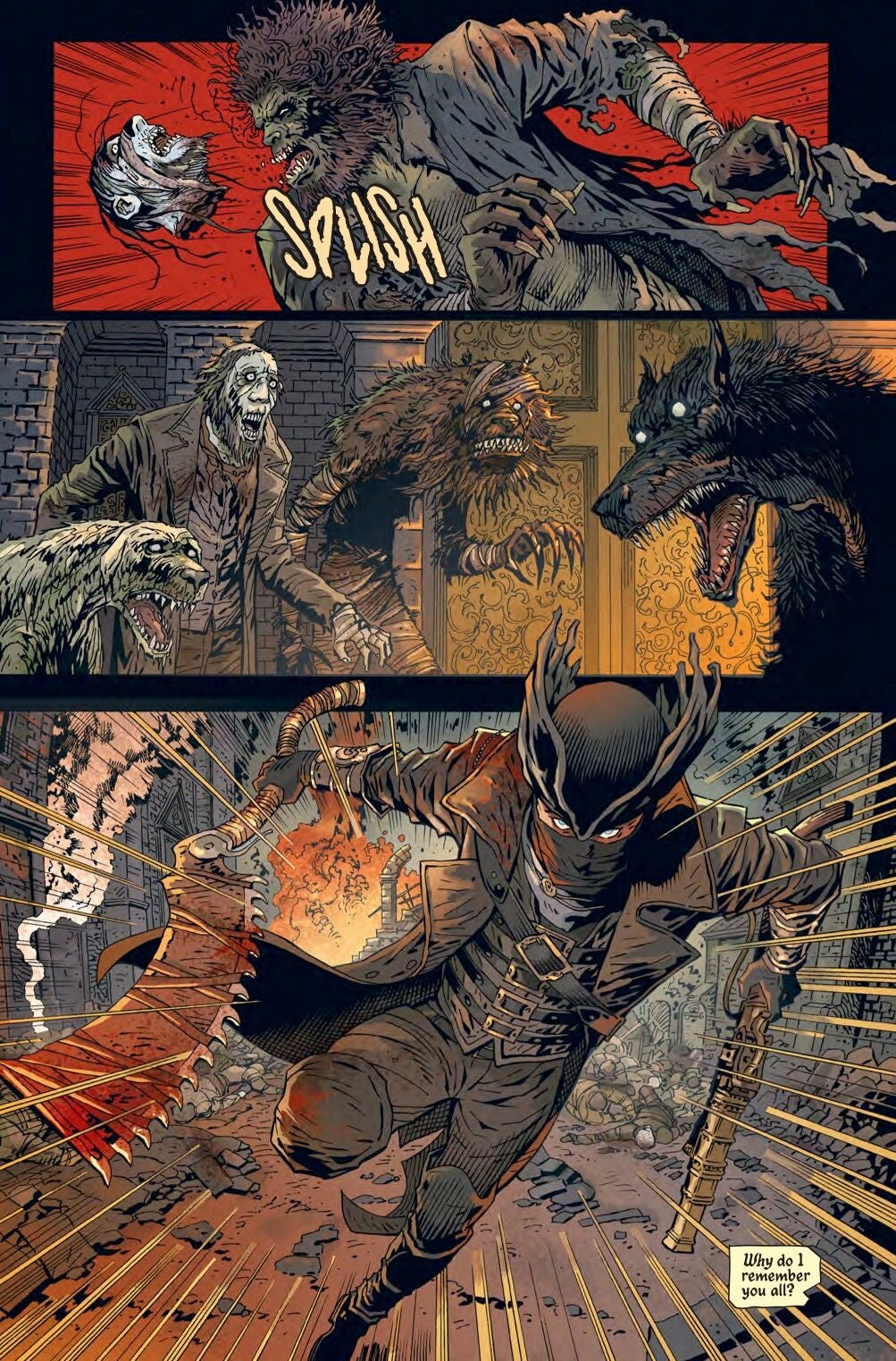 The hunters also introduce him to a possible way out: A child, their skin pale blue, looking like an alien. At the lead hunter’s behest, the child digs nail into skin, and white blood comes out. The protagonist remembers something he was told, or something he dreamed once: Seek paleblood, and transcend the hunt. So he takes the child and tries to escape.

Everything that makes the world of Bloodborne intriguing is here, with plenty of Easter eggs for fans of the series (the Powder Kegs!). Kot deftly draws the reader into a world of evil churches, beasts, and maybe something even stranger behind it all. He also introduces something that the games lacked, a compelling place from which to expand: A human element. The nameless hunter has a companion, now, which provides an interesting possibility for human drama set against the cosmic drama that the game is known for.

Some purists might not appreciate any expansion of Bloodborne. It’s a complete package, and its elliptical storytelling doesn’t exactly make a tie-in comic the most obvious choice. But this, surprisingly, works. Kot’s team clearly gets something about this world, and I’m interested in seeing what sort of story they tell in it. Until the hunt ends, or nightmare sleeps. Or we all go mad.