Comics relaunch and renew themselves on a regular basis. That’s nothing new. But there’s something strange about what’s happened to the post-Secret Wars Marvel Comics. The 2015 event heralded what was meant to be a simpler, more accessible new age for the company – but instead, it’s been kind of a wild, baffling ride. 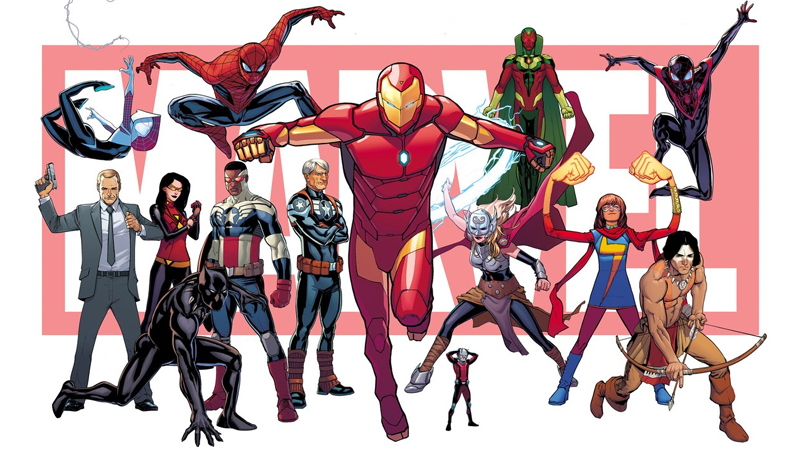 When Secret Wars came to an end in late 2015, it ushered in a new start for Marvel’s comics line-up, with new series starting over again at issue #1 (some holdovers from before the event were so short-run they actually released two #1 issues in the space of a single calendar year, such as Unbeatable Squirrel Girl, which of course made a joke about it), in what was meant to be a complete restart for the actual universe itself. In fact, it began on an entirely new Earth, reborn out of the shattered remnants of the Marvel multiverse that was eradicated in the opening moments of Secret Wars.

All-New, All-Different didn’t completely erase continuity, but it did thrust many of Marvel’s mainstays in new directions. The new Avengers team was half-populated by scrappy young newcomers, such as Ms Marvel and Miles Morales (now integrated into Marvel’s prime universe, after the destruction of the Ultimate Marvel Universe). Peter Parker was now a Tony Stark-ian tech CEO billionaire instead of an everyman photographer. The X-Men were pushed out of the spotlight, while the Inhumans – enjoying new visibility thanks to their then-burgeoning integration into Marvel Studios’ TV and movie plans – were ascendant. There were new versions of classic heroes in the spotlight, from Jane Foster’s Thor, to Sam Wilson’s Captain America, to Amadeus Cho’s new Hulk.

But the good times for Marvel’s mightiest weren’t set to last. June 2016 saw the beginning of Civil War II, an event that pitted the hero community against itself, divided into factions underneath Captain Marvel and Iron Man over the existence of an Inhuman who could seemingly predict the future. It was a long, rough, not-very-good event – one that saw Bruce Banner killed off, put Tony Stark in a coma, and created bitter divides among formerly tight-knit friends. And when it ended we got… 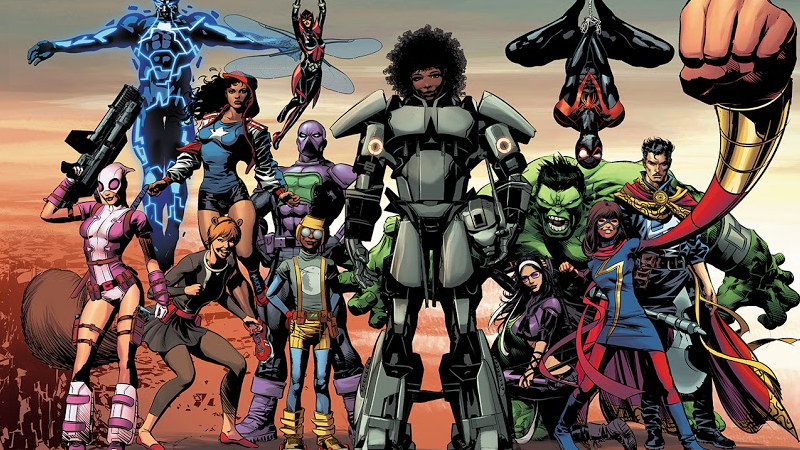 Not to be confused with 2012’s Marvel Now! shakeup, Now 2.0 began in November 2016 (while Civil War II was still happening) and was less of a dramatic overhaul than All-New, All-Different. While there were multiple new series and restarts at issue #1 (of course), not every Marvel series was reset again. Now 2.0 primarily focused on the bitter divisions that still lingered after Civil War II‘s climax.

Tony Stark’s coma lead to the rise of not one, but two armour-clad heroes: Doctor Doom took on the Iron Mantle in Infamous Iron Man, while young MIT student Riri Williams became the more noble successor to the Stark legacy, replacing Tony in the Invincible Iron Man comic as Ironheart. Elsewhere, the young Avengers of All-New, All-Different struck out on their own to form the Champions out of disillusionment with their elders, while the X-Men and Inhumans went to war with each other over the potential extinction of Mutant-kind. Basically, most people were miserable.

Especially miserable? Steve Rogers, who was miraculously restored to his super-powered self (he lost his abilities before Secret Wars, necessitating Sam Wilson taking on the shield as Captain America) through Cosmic Cube shenanigans that also turned him into an agent of the fascist organisation Hydra. Steve spent most of Now 2.0 acting as a secret agent for Hydra, back in action as Captain America but secretly laying the grounds for the group’s hostile takeover of the US, which played out to… let’s say controversial effect in the 2017 event Secret Empire. 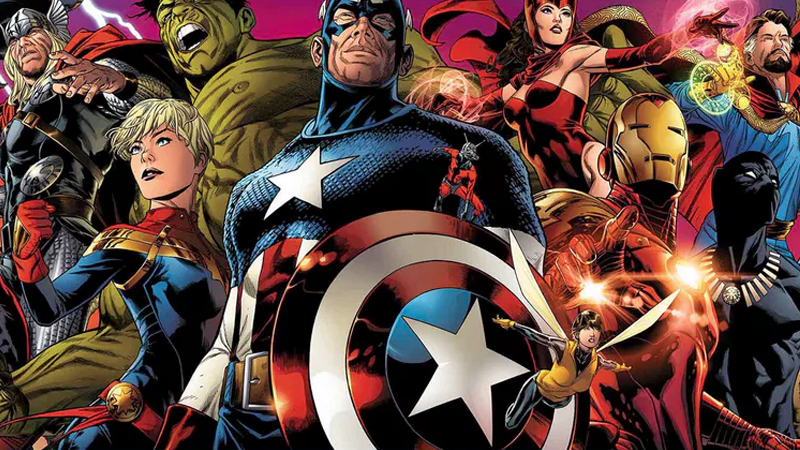 This time, Marvel’s heroes weren’t divided, finally banding together again to fight back against Hydra Steve’s fascist rule. But a tempestuous reader reaction to Secret Empire, as well as as a growing discontent with some fans at modern Marvel no longer showcasing the classic heroes that made it a hit, led to the nostalgia-trading announcement of Marvel Legacy.

Although Legacy – which only just began last September – was meant to represent a moment where Marvel returned to its roots, a lot of its shake-ups were superficial. Some big things have happened, such as Sam Wilson giving up the Captain America mantle and handing it back over to a newly-reformed Steve Rogers in the wake of Secret Empire, or the return of the Ultimate Marvel Universe. There was even a huge resurgence for the X-Men, who bounced back from earlier hard times and dealt with the returns of iconic characters such as the original Wolverine (who’d been dead since 2014) and most recently Jean Grey.

But Legacy‘s, err, legacy so far is one of nostalgia rather than anything truly major. There have been details like old-style corner box art on comic covers, or most perplexingly, a return to “classic”, pre-Secret Wars issue numbering that mashes up a series’ previous runs into a single saga, causing issue numbers to leap from the mid-teens to multiple hundreds at the blink of an eye – Invincible Iron Man, for example, jumped from issue #11 all the way up #593! While we still have a few months of Legacy left, it’s hard to see what further impact it could have beyond a message that Marvel wanted to return to its glory days.

And that brings us to last week’s news that yes, we’re going through this all over again in May 2018. Marvel heralded its May solicits with a video declaring a “Fresh Start” for the company’s comics this year, just five months after the last fresh start truly began. We still don’t know what this new shake-up will completely involve – we don’t even know its official name yet.

There have been a few comics announced as part of the roster shakeup, however. There will now only be one Avengers book (by Jason Aaron and Ed McGuiness), after years of multiple teams bearing the name, which will unite Black Panther, Thor (the Odinson version), Iron Man, Captain America, She-Hulk, Doctor Strange and Ghost Rider. Odinson will be reinstated as the God of Thunder in his own Thor series, by Jason Aaron and Mike Del Mundo. Black Panther by Ta-Nehisi Coates and Daniel Acuña will pick up on the thread first teased in Marvel Legacy #1 of there being a vast Wakandan Space Empire. Following his death in Civil War (and his bizarre re-appearance in Secret Empire), Bruce Banner will be restored as the Hulk in Al Ewing and Joe Bennett’s The Immortal Hulk. In another out-there announcement, multiplying mutant Jamie Madrox – AKA Multiple Man, AKA future Marvel movie star – is getting his own series as part of the relaunch, too.

That’s pretty much it so far, but we do know of at least one other shake-up this latest relaunch will include: An undoing of Legacy‘s arcane plan to bring back the old-school numbering for Marvel titles pre-Secret Wars. Every new and relaunching series will start off once again at #1, making the decision to release months of titles with issue numbers in the multiple hundreds before reverting back look just as silly as it ended up being. In fact, some titles will feature two separate numberings, continuing the Legacy number and a new relaunched number for good measure. Which is… not confusing at all.

Time will tell if Marvel’s latest “fresh start” will end up being exactly that, or if we’ll be here in spring discussing its successor. But regardless of the outcome, it’s been a weird time for Marvel Comics lately – a fresh start that is truly fresh is just the thing the publisher needs to settle what’s turned out to be a tumultuous few years.