Fortnite Mobile Is Becoming A Battle Of The Sexes 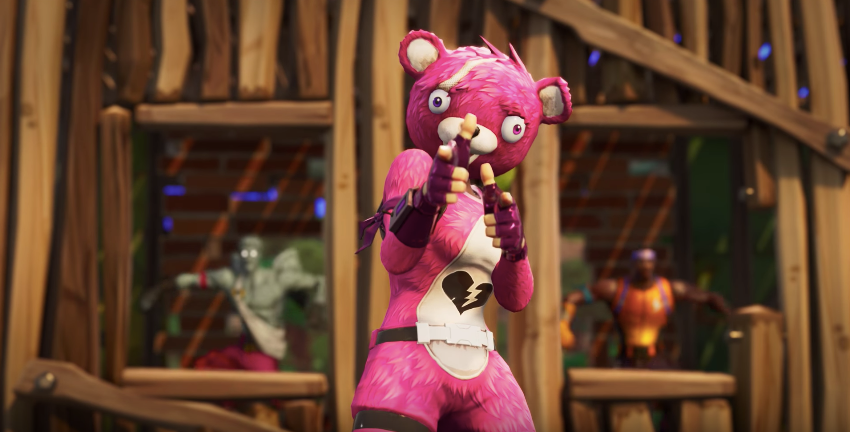 Fortnite has become a constant presence in relationships, inspiring conversations about the dynamics between couples, including how men and women interact. With the release of Fortnite on mobile, conversations about gender still abound, but this time with a tinge of hostility.

The conversations often involve aggravation by male gamers about the presence of female gamers, something that's become more prevalent in the last two weeks as Fortnite has exploding from PC and console onto mobile. Tons of people are playing it. More specifically, people are playing Fornite mobile who wouldn't normally play an intense competitive multiplayer game.

Why not? It's free, and now that it's on a phone you don't need specialised hardware to play it besides a device you likely have. You don't have to pay an online gaming subscription like Xbox Live, either.

The result is that a surprisingly wide demographic is picking up Fortnite. For instance, educators who teach teens are seeing this phenomenon happen in their classrooms.

Nick Gutierrez, a high school teacher, told Kotaku that the mobile version of Fortnite "seems to be the one played by the 'non-gamer' types. Our school has a lot of low income students who can't afford a good gaming PC and maybe they have the wrong console. The mobile version has been a boon for the students that only have a phone. Now they can hop on the trend."

Nick Fisher, a teacher who had to make a special confiscation bin just for battle royale games, said that he sees " a lot more girls playing" at his school now that the game is out on phones, too.

Players on Twitter are seeing this first-hand as well. The identity of Fortnite on mobile is linked to women and girls. 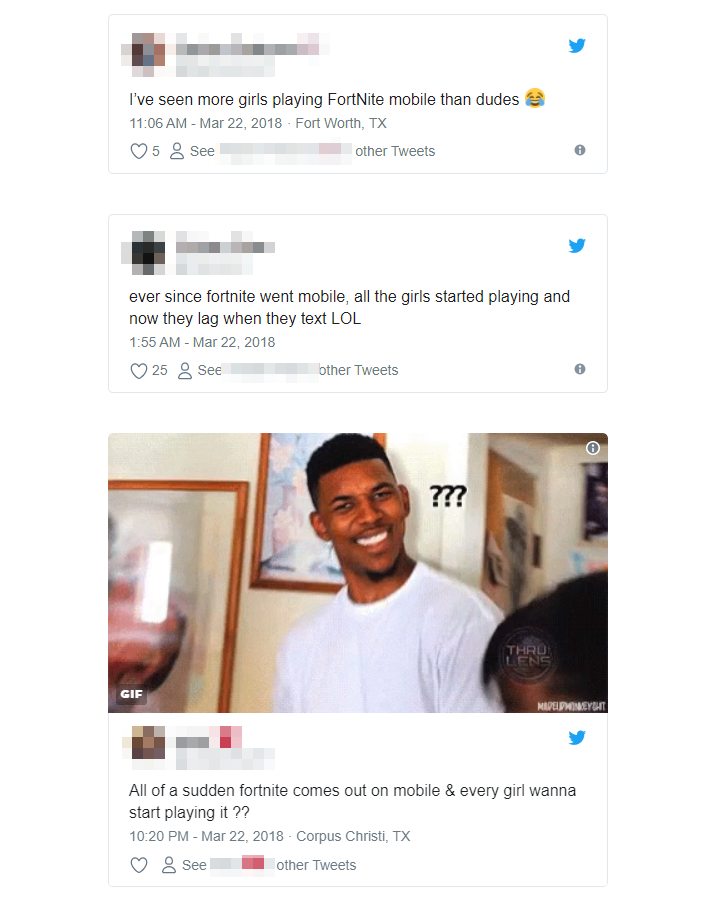 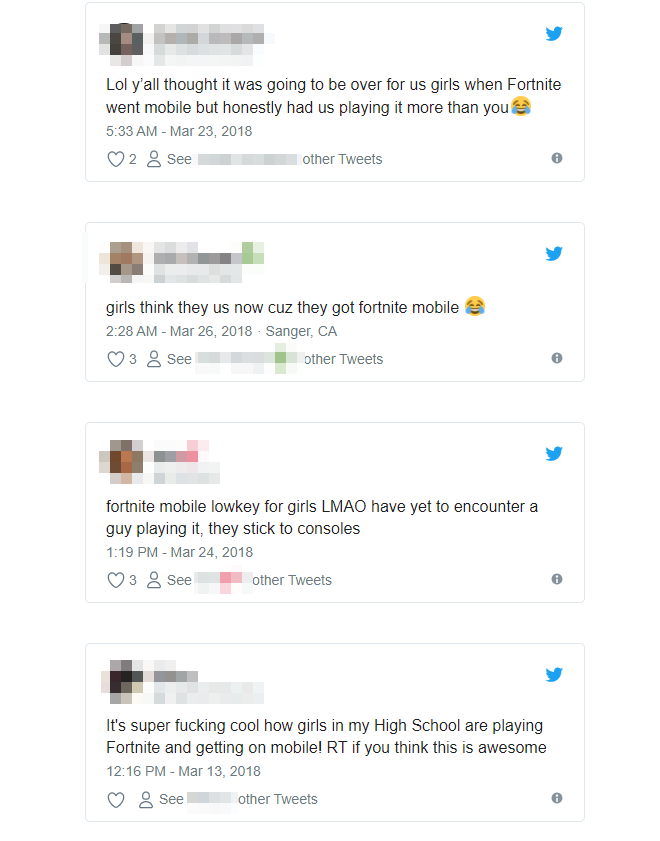 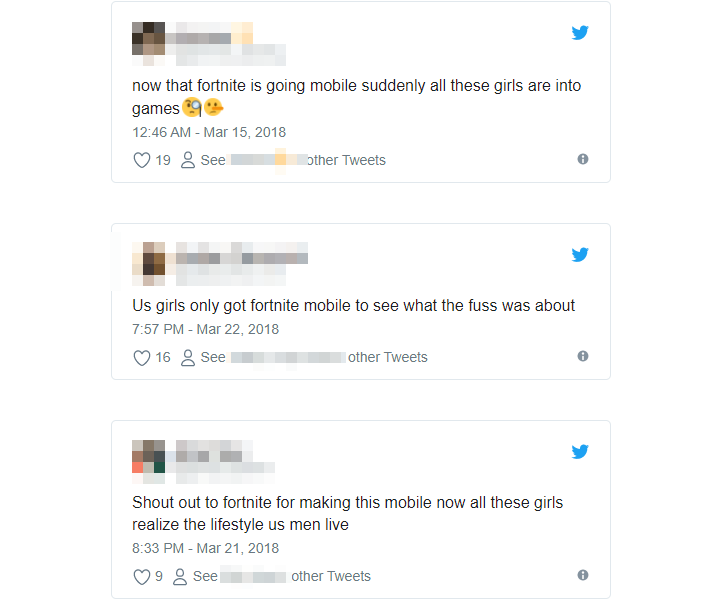 Part of the reason why women and girls playing become such a big topic of conversation is that just a few weeks ago, the culture around Fortnite was the opposite. As some male gamers told it, Fortnite had overtaken their life enough that women they knew kept pestering them about it.

Why aren't they texting back, their girlfriends would ask. Is the game really that important? Memes about disgruntled girlfriends flourished online, and men comisserated over their shared relationship woes. Women just didn't get why Fortnite was so good. It was enough of a thing that at one point, it became a sign of devotion if your boyfriend was willing to text you back in the middle of a Fortnite game.

Most boys wouldn't, so if your beau does, then he must love you.

When you’re addicted to Fortnite and your girl keep texting you ???????? pic.twitter.com/IheOHvnFPX

Now that more women are playing the game, though, some men say they're starting to suffer through some of what women were complaining about not too long ago. "Plot twist: my girl is more into Fortnite mobile then I am and am now begging for attention????.....," wrote Twitter user Jovany.

Some men are riffing on the supposed hypocrisy of it all. "All you girls hated on Fortnite for so long but once it comes out on mobile your sucking dick for codes smh," said Twitter user Max.

"These girls playing Fortnite Mobile the same girls that were complaining 2 weeks ago about not getting a text back????????‍♂️," said Twitter user Logan. At least one person on Twitter claimed that some girls were so desperate to gain entry to the closed mobile Fortnite event that they were offering nudes in exchange for access.

While Fortnite mobile's popularity with women is extremely visible and discussed among players, there's a tiresome undercurrent that comes along with it. Fortnite mobile has touch controls and a cramped play area that make playing it clumsy. It also has some mechanics that compensate for these shortcomings by offering a bit more information about where your enemies are coming.

Yet, Fortnite is still still a brutal action game that is the epitome of triple-A gaming right now. Somehow the narrative around Fortnite has warped. The mobile version isn't as intense as the real thing, the thinking goes. Fortnite mobile players are trash, some players claim.

The result is that even as women play the most popular hardcore game in the world, once again we're having conversations about fake gamer girls who are supposedly only playing because it's easier, or because it's a good way to get attention and popularity.

"Fortnite mobile is not real Fortnite girls," wrote Twitter user Aaron. "All the girls who downloaded Fortnite Mobile did it to fit in ????????‍♂️," Twitter user Andrew claimed.

"All you girls playing Fortnite on mobile just tryna chasing the clout but it's not working," warned Twitter user Dan. "Just because you got Fortnite mobile or played PUBG once you're not a gamer girl," said Twitter user M.

"The bums i see standing still on Fortnite mobile must be the girls tryna play huh? ????" wrote Twitter user Eli. "Females, you not allowed to say you play Fortnite unless you play it consistently on console, not mobile," another Twitter user stated.

"Fortnite mobile is ran by women don't feel too cool if u take a dub," said Twitter user Gage.

With this blemish, some players claim they are starting to dislike the mobile version of the game. "Girls started playing Fortnite mobile and for some reason now i feel like i should never play that game again," said one Twitter user.

I tried to ask many teens about why they feel girls playing Fortnite is a bad thing, only to be blocked or ignored. One of the only responses I got was, helpfully, "Lmaooo kys." Tanner Bachnick, a Catholic teacher who works with teens, polled his students as to why they disliked the mobile version of Fortnite and was generally told by a dozen pupils that it was a "horrible port."

This isn't actually true - the game runs shockingly smoothly, as we've reported - but in my opinion, generally the stigma is less about the game itself than who is playing it.

Even as women play the most popular hardcore game in the world, once again we're having conversations about fake gamer girls.

"None of them said they liked it and one even said 'it's for little kids who can't afford consoles,'" Bachnick said. Likewise, there are a number of conversations out there from players about how they're on mobile because it's affordable.

"If you play Fortnite mobile you're instantaneously deemed broke," wrote Twitter user Joey. There's both a class and gender element to why Fortnite on mobile gets hate, though sometimes they intersect.

Women aren't stupid. They know the console versions are considered 'better.' Many don't have a choice.

Anecdotally, many girls I know don't buy consoles because they don't identify as 'gamers,' and so having a dedicated system just to play stuff seems like overkill. In some cases, women are discouraged from purchasing consoles because it seems more like a boy's hobby.

When I was growing up, I was encouraged to spend any free time doing chores or studying. With this in mind, it makes total sense to me that many women end up picking up mobile games rather than console games or PC games. It's a welcoming and less expensive venue to have some fun, and that remains true even if gaming culture tends to deride and devalue the importance of mobile gaming.

"Boys are actually scared of girls with Fortnite mobile because if we play as much as them, we'll get good," joked Twitter user Chloe. "Watch out."