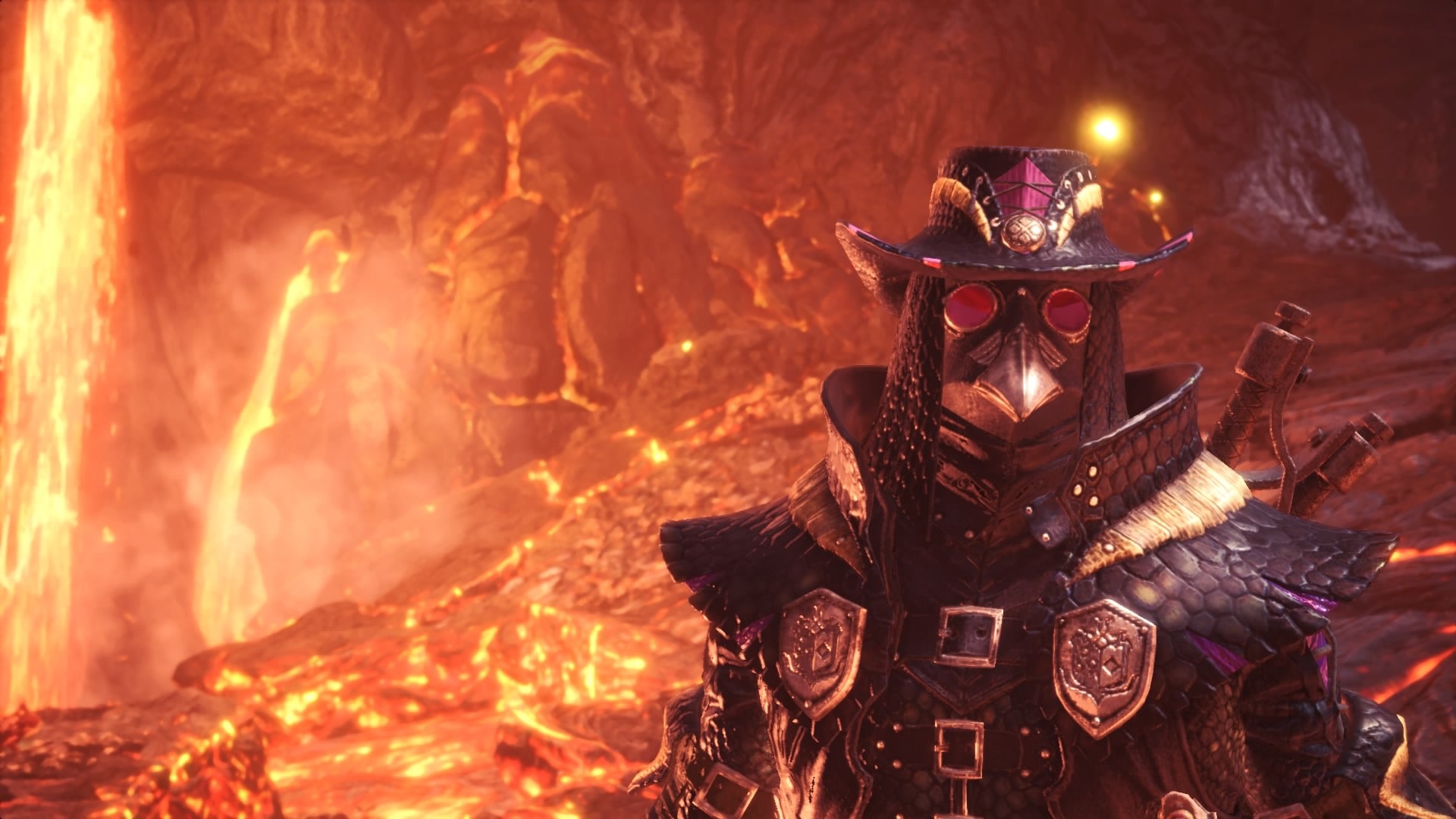 Monster Hunter: World is chock full of fun given its potential for multiplayer shenanigans. Yes, its battles are epic — hunting down fearsome monsters takes patience and discipline. But you know what else is great? The music which scores its brilliantly strange world, and its collection of crazy monsters' theme songs.

Monster Hunter: World is my latest attempt to challenge myself by playing more multiplayer games and trying different genres.

It's my first Monster Hunter, and each hunt in the action-packed adventure has been a learning experience. There are so many menus, lists upon lists of quests to unlock, tons of crafting items, armour sets and weapons — it can all feel overwhelming.

This doesn't even begin to cover the actual monsters, each with unique moves to study, and how to effectively counter them to stay alive. As if this wealth of information isn't staggering enough, World dumps you into its universe to go exploring its diverse ecosystems.

From the mysterious, colourful Coral Highlands to the deserts of the Wildspire Waste, there's a lot to take in. Most maps are not just another stock video game locale — even if World has the tried and true lava pits and jungles that we've seen in countless games. These environments are rich in details, with parts that can be utilised to a hunter's — and prey's — advantage. They're interesting and stunning.

And then there's the Rotten Vale.

Note: This article addresses some of the elder dragons found at the end of Monster Hunter: World. If you would prefer not to be spoiled, then please consider this a warning!

The Rotten Vale Is Bizarre. So Is Its Battle Music 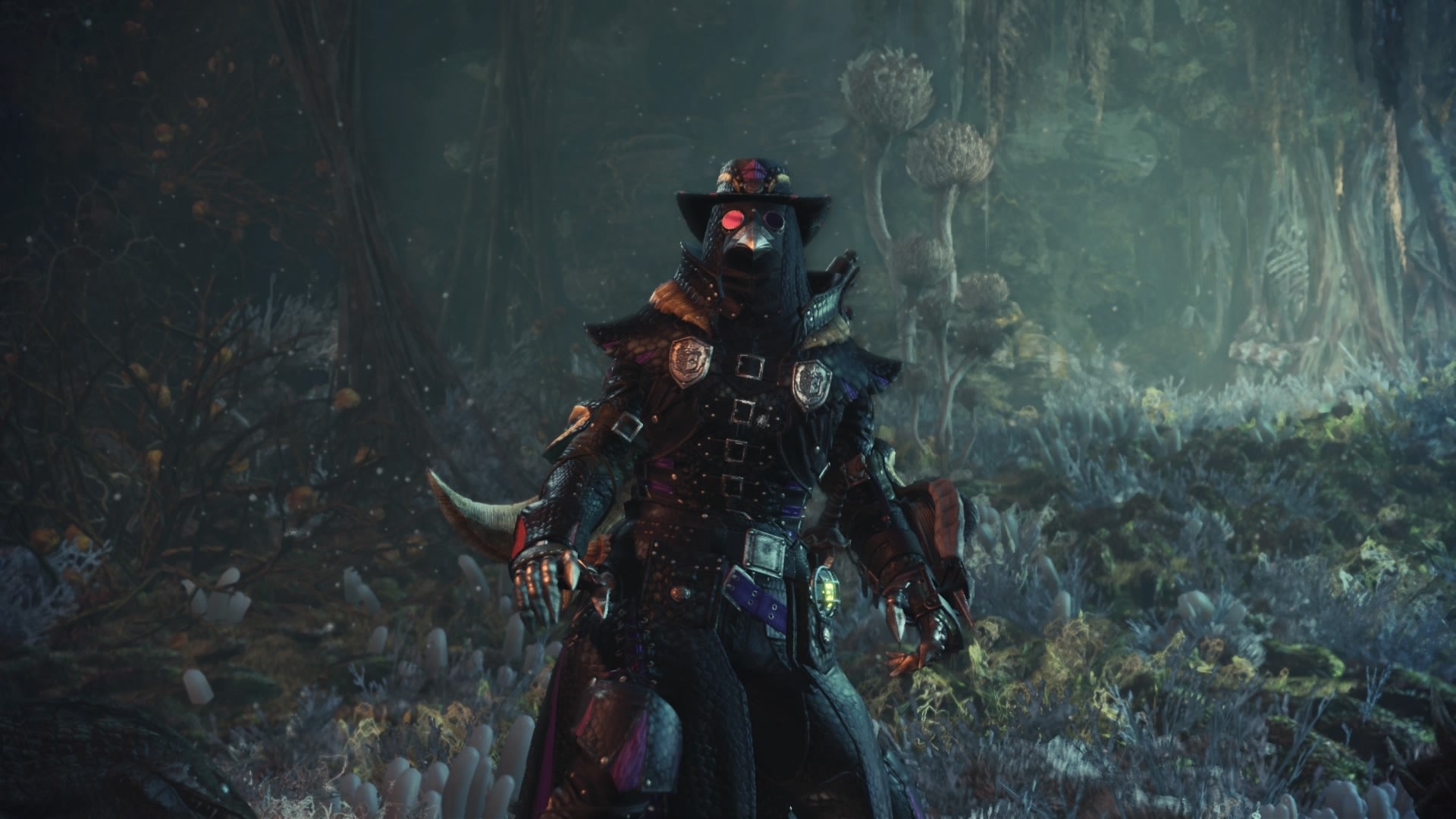 When I first arrived in the Rotten Vale, I hated it. It's a gross visual amalgamation of rot and decay. Icky red fleshy areas, drab browns and grays dominate its caverns. Uninviting sickly yellow and green toxic gases permeate in various areas. Smaller monsters and insects living there are aggressive. There are areas deep below the Rotten Vale that are beautiful and bright, with pools of what appears to be crystal blue water.

They're in stark contrast to its bone piles and corpse-laden grounds. It's a deceptive respite as the liquid pools will eat away at your health on account of their acidity. Frankly, any watery area that doesn't indulge of fishing mini-game obsession is a bad place as far as I'm concerned.

I spent a lot of time in the vale, farming Great Girros for his armour set. There was one curious thing that delighted and caught my attention in that god-forsaken place: the comical battle music that plays.

When the fast keyboard starts up in the track, "Murmurs from the Land Forbidden" by Akihiko Narita, I lose it. It sounds cheesy and out of place in that stifling graveyard. It's upbeat and far from the brooding, dreary sounds I expected. At only eight seconds long it's amazing how much of an impact the intro makes. It transitions into an orchestrated battle theme that builds its intensity. The piece is underscored by moments where its playful MIDI sounds of the keyboard tease.

If I had to sum it up, the keyboards remind me of older Final Fantasy games. It's a reminder that despite how serious and tonally dark the Rotten Vale is, World is as ludicrous as video games get. The game is the meaning of fun distilled into a purest form, and uses its breathtaking musical moments to aptly score the hardships and triumphs that come with hunting. Silly and serious is what World is all about and this piece sums that up well. 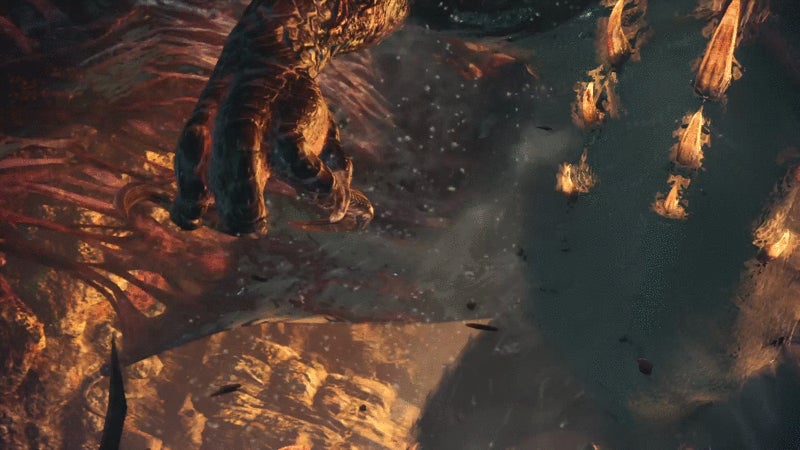 I was happy when I left the Rotten Vale. But as I got close to the end game, I had to return to fight one of World's elder dragons. I shuddered to think what monstrosity awaited in the mountain of bones and carcasses. When Vaal Hazak emerged, it was everything I expected yet couldn't fathom.

This gigantic beast, an undead elder dragon, able to summon a legion of undead lesser monsters to him, was a sight to behold. World does an awesome job of introducing its larger monsters with its cinematic cutscenes, and I was enthralled and amused by his torn flesh that oozed and dripped off his body. A zombie dragon? I was convinced I would surely die. A lot.

When his music began to play, I knew I was in more trouble than I imagined. His theme, "Keeper of Hades" by Akihiko Narita, is the very definition of what an excellent boss theme should be.

Vaal Hazak's theme begins with a slow build layered over frantic emotion. It's an introduction befitting a formidable foe — meant to instil that fear. It's preparation before launching into a full on frenzied score. At 45 seconds, it gives way to a thoughtful composition. Gone were the comedic MIDI tunes of fighting lesser Rotten Vale monsters, replaced by elegant gothic harpsichords to underscore its quieter moments. These quiet moments read as a hunter gaining the upper hand in a fight but it's a short breather before the furious, dreadful notes return as a reminder that Vaal Hazak's might is humbling.

I managed to scrape by with the help of friend, and when I returned to fight him on my own, I died two times after that. And yet! As tough as Vaal Hazak is, I adore him. For the elder dragon that awaits in the Elder Recess is the true monster that gives me nightmares.

Teostra Can Die In The Fires He Unleashes. But May His Music Live On 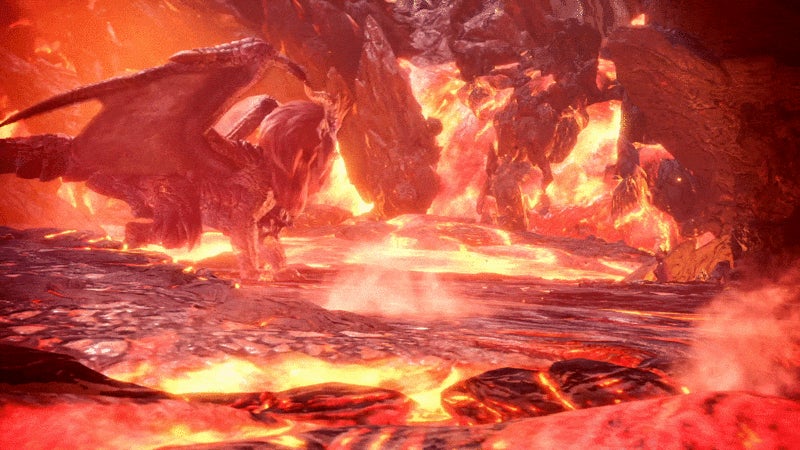 Every time one of my friends suggests we hunt Teostra, I audibly groan in disgust into their headsets. "I hate that guy," is the common refrain I utter.

I'll just come out and say it: The Elder Recess is my least favourite area in the game. I enjoy World's maps for their cool takes on the traditional representation of video game locales. The Wildspire Waste's desert, for example, has a swamp populated with purple flowers that holds fresh aquatic life. It's not all stretches of sand and a refreshing oasis. It's more realistic. The areas in the game feel lived in and untamed, where the creatures truly own their habitats and as hunters, we're an invasive species.

The Elder Recess, on the other hand, just isn't all that interesting to me. It looks bare, for the most part, even with the giant crystals appearing in some of its areas. There's also a lava covered area where Teostra hangs out because why would that over-sized, fiery jerk pick any place else than that?

Teostra's attacks, even though I know they're coming, often manage to get me. I'm usually tied up in a dual blade blade dance combo when he erupts using his Supernova move. It always feels embarrassing being caught by the blast because it looks like it happens in slow motion.

His excellent theme music is his only saving grace as far as I'm concerned. And damn, it's really something else.

Tadayoshi Makino's "Ruler of the Flame" is a slow, steady paced composition with an emphasis on a drum beat that's designed as a focusing point. That makes sense for how exhaustive battling Teostra can feel. After a short upbeat portion in his theme, the part that digs into my ear while battling him plays around the 1:25 minute mark. Maybe it catches my ear because I associate it with being blasted to smithereens, but it's certainly memorable, and majestic for this lion king of the ...fire.

Nergigante Is Like An Adorable, Rambunctious Puppy With A Theme To Match 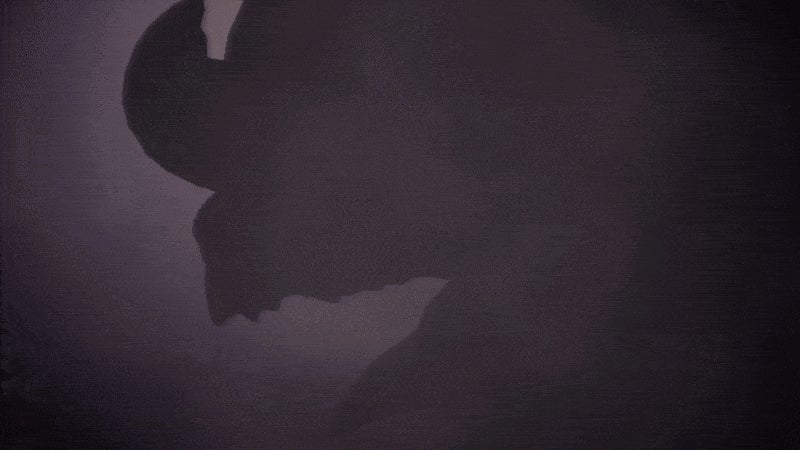 When Nergigante showed up in World, I didn't know what the hell I was doing. His first appearance happens during the tedious battle against Zorah Magdaros, a monster so huge that it's like a walking volcano. So huge, that Nergigante could hitch a ride on its back and use that space as an arena to destroy the hunters fending him off (which he did to me, of course).

Unfortunately, Nergigante ends up in the Elder Recess near the end of the game. But as he has a very good storied reason as to the why — which I won't say but if you know, it's morbidly funny — I forgive him. The Elder Recess' expansive, sparse areas where Nergigante can initially be found means that he has full advantage in battle. It gives him range to tear the place up and launch high speed attacks that can blindside you (which he did to me, of course. Many times in my failed attempts at beating him).

His erratic behaviour (which, as with any monster in World, isn't so erratic once you're able to recognise their fighting patterns) has an erratic theme to match his speed-demon personality.

I don't think I enjoy the opening notes of any other theme in World more than Nergigante's "Even Elder Dragons Tremble". It's all over the place that then leads to triumphant sounds. But are those in favour of Nergigante or you? What follows is a build up to a long, drawn out fight. But unlike Teostra's steady, focused rhythm, Yuko Komiyama's Nergigante theme feels like an up and down struggle.

A push and a pull that's a battle of wits, constantly teetering on victory or defeat. It even incorporates, very briefly, Monster Hunter: World's main opening theme. As if to say: this is what you've been striving towards. All the hours poured into the game for this moment.

Nergigante isn't the game's final boss, but reaching his fight is an arduous journey that really tests all you've learned.

I suppose this can be said of every monster in Monster Hunter: World. Each fight is a battle that's more strained and demanding than the previous. World's progression through its locales is an adventure I was extremely thankful I did. After 95 hours, I'm not calling it quits just yet as there are hundreds more hours of quests, farming, and crafting I could do.

I look forward to it because I've been having a blast playing with my friends. The game continues to be interesting with the events and new monster hunts added to the game. I also get to listen to its incredibly gorgeous soundtrack that I never tire of, fighting in familiar areas that are still challenging with every new hunt I embark on.