By the time I got to the elementary school in Silent Hill, I was so scared that I had to turn off my PlayStation. If those little grey children with their little baby butcher knives were too much for me to handle, well, frankly I’m surprised I didn’t suffer a full-on nervous breakdown the first time I encountered Pyramid Head in Silent Hill 2.

I eventually finished the first Silent Hill (in a brightly-lit room), became a fanatic for the series, and eagerly dove into the PlayStation 2 sequel when it was released in 2001. The game opens on protagonist James Sunderland reading a letter from his late wife, Mary, wherein she beckons him to meet her in Silent Hill, a lakeside resort that holds special memories for the couple.

“A dead person can’t write a letter,” James notes in a voiceover.

At this point we all understand that really he should turn the car around and head home. Curiosity wins over rationality, however, so instead he heads into town to see who – or what – is waiting for him.

From the game’s opening moments, it’s clear that Silent Hill is no longer the sleepy getaway that James remembers. The long, winding path through the woods into town is filled with guttural sounds that could be from an animal, but probably aren’t. Also, are those footsteps behind you? A thick, heavy fog hangs over Silent Hill.

Avenues end abruptly, broken edges abutting the dark pits of oblivion. James, trapped in the town now, finds blood smears on the pavement and worse: twisted, murderous creatures shambling through the streets and scurrying under cars. He makes his way to the Wood Side Apartments, where both he and the player are introduced to Silent Hill’s most terrifying resident. 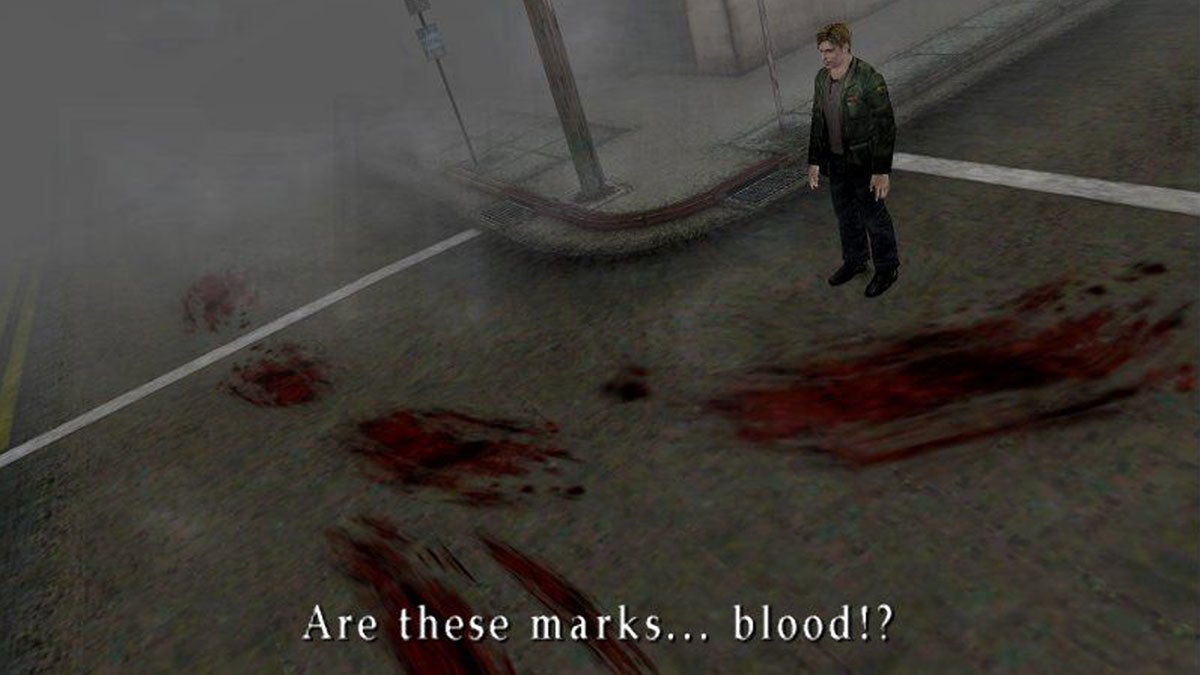 Our first encounter with Pyramid Head is properly ominous and intimidating, made all the more powerful by its subtlety. You make your way down a hallway, following the sound of a scream. Suddenly there he is, his butcher’s apron covered in blood.

He’s bathed in a red glow that has no source, looking at you. You think he’s looking at you, anyway, since his face, assuming he even has one, is obscured by his massive triangular headpiece.

The wall of bars that bisects the hallway is all that separates you from Pyramid Head, and you hope it’s enough to keep him at bay. While he doesn’t overtly threaten you, he’s more than menacing enough just standing there, watching, and breathing.

At this point you don’t know anything about him except that he’s quite obviously very bad news, and that this isn’t the last time you’ll see him.

Pyramid Head is quite literally the stuff of nightmares for James Sunderland – and for me.

When you exit the adjacent apartment a few minutes later, Pyramid Head is gone and the tension ratchets up a notch. It ratchets up even further when you cross to the other side of the bars, into the space he’d occupied moments before. At this point in my first playthrough of Silent Hill 2, I was positively full of dread.

Did James imagine Pyramid Head or was he still there, lurking in the darkness beyond the meager beam of my flashlight? Was he behind one of the many doors of this derelict apartment building, waiting for me?

I found out quickly enough. Upon entering Apartment 307, one of the series’ most infamous cutscenes plays. Pyramid Head is there, in the midst of some kind of violently sexual act with two mannequin monsters, both of whom end up dead. It is brief, and we’re never entirely sure what we just witnessed, but the feeling of depravity registers.

It’s disturbing and reiterates the lesson we recently learned: this guy is bad news, and we certainly don’t want to be trapped in this apartment with him.

James takes refuge in a nearby closet, watching through the wooden slats of the door. Pyramid Head knows he’s there, however, and edges ever closer. James fires off a few rounds from his handgun, and while it’s unlikely to have hurt him much (never mind actually kill him), the potshots are enough to make Pyramid Head leave the room.

I admit, it took me a bit to work up the courage to leave that apartment, knowing he was out there. Although this monster still hadn’t directly threatened me, he was getting more aggressive. A newspaper article I’d found in the trash seemed to refer to this still-mysterious figure. Convicted killer Walter Sullivan claiming that it was this “red devil” that drove him to murder.

If Pyramid Head could infect and persuade a man like that – and if he abused and murdered some of his own fellow monsters – what would he do to James? The tension in the game was getting to be unbearable, but there was nothing to be done except explore further.

Eventually James jumps through a window and across an alleyway into the Blue Creek Apartments. I breathed a sigh of relief, feeling that I’d left Pyramid Head behind in Wood Side. It was a very short-lived respite, however.

Almost immediately, you solve a puzzle that gives you the key to a locked stairwell. You open the door and once again he is there, doing more obscene things to a fellow nightmare.

Pyramid Head kills the monster, and this time he wants to kill James, too.

He was an executioner, a vital piece of Silent Hill’s dark history.

The stairwell is submerged in a viscous liquid and you’re trapped on the platform – a very small, L-shaped platform – with Pyramid Head. He’s now wielding the Great Knife, cutting large swaths with it and trying to bring it down on your head. It’s ridiculously large (like, Final Fantasy protagonist large) and difficult to avoid, particularly if you’re in a blind panic, as I was the first time I began this boss fight.

I wasn’t expecting to see him again so soon, but suddenly he was right there in my face and the knife can kill you in one shot and there’s nowhere to run … he doesn’t have a health bar and my bullets aren’t even slowing him down, how many times do I have to hit him…

…and then Silent Hill’s notorious air raid siren blares. Pyramid Head heeds its call and begins to descend the stairs, submerging into the cloudy water. The liquid drains, the sirens cease.

While you’re relieved that the fight is over and you somehow survived, your only exit is at the bottom of the stairs. You must follow him down.

James emerges back on the streets of Silent Hill. While there is still the fog and the monsters, the open air is welcome after the claustrophobic feeling of the desolate apartment buildings. But you know you didn’t kill Pyramid Head, which means that he’s still out there somewhere, waiting for you.

He continues to hound James throughout the game. He appears when you least expect it and pursues you through other ruined buildings in town. He murders your companion Maria in front of you and when she comes back (she only exists because James wants her to, after all) – he murders her again.

Finally it all culminates in a final battle against two Pyramid Heads, but even here James and the player are denied true catharsis: the monsters die by suicide, impaling themselves on their Great Spears. After hours of this torment and terror, we don’t even get to kill the bosses ourselves.

It would take pages to unravel and unpack Pyramid Head, to discuss everything he is and everything he represents in the game. He was an executioner, a vital piece of Silent Hill’s dark history. He’s a manifestation of the guilt James feels for resenting Mary while she was dying and for eventually killing her himself.

Pyramid Head’s oversized, phallic weapons speak to James’s sexual frustration during his wife’s long illness. He is James’s tormentor and punisher, both physically and mentally, essentially a manifestation of James’s psyche and self-loathing as they tear him apart. The dual Pyramid Heads are only vanquished when they become “useless” – when James finally admits to himself what he’s done to Mary and he tries to come to terms with it.

I’m not the first person to call Silent Hill 2 a masterpiece, perhaps even the greatest horror game of all time. Pyramid Head and everything he represents are a huge part of what makes the game so compelling, so worthy of analysis, investigation, replays and reflection.

He’s deservedly become a video game icon and, for better or for worse, the de facto face of the franchise. (That is, again, if he actually has a face. You know what I mean.)

But it’s that long, slow burn of an introduction in the Wood Side and Blue Creek Apartments that has stuck with me all these years. I can still see him standing silently behind those bars in the hallway. I can still hear the shrieking scrape of his Great Knife as he drags it across the stairwell landing.

The buildup of tension as the encounters with him escalate is exquisitely paced, keeping players on edge without a reliance on jump scares and cheap shocks. Pyramid Head is quite literally the stuff of nightmares for James Sunderland – and for me.