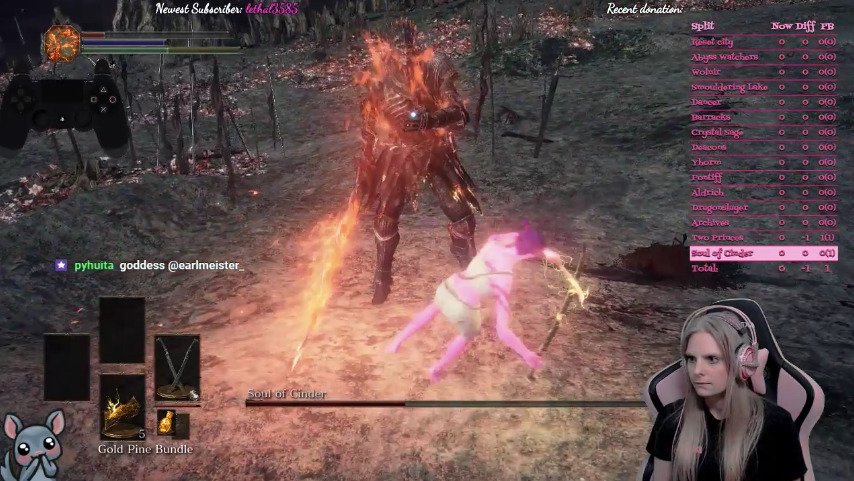 One thousand and two hundred hours, eight months, and innumerable vape hits after Dark Souls 3 streamer Suzie first attempted a no-hit run of the infamously difficult game, she lit her final bonfire last week. Suzie says she's the first woman to record herself playing through Dark Souls 3 without getting hit. She pulled off the feat to demonstrate that women shouldn't be afraid to try for over-the-top accomplishments in games.

"I wanted to prove that we are just as good, even though the majority of people who do the runs and who are invested in the Dark Souls games are guys," Suzie said over Discord voice last Friday. "That doesn't mean girls aren't as good, you know?"

It's difficult to prove that Suzie, 28, is in fact the first woman to do a no-hit run of Dark Souls 3. In our research, Kotaku hasn't been able to find another. Regardless of if she's actually the first, any no-hit run of the brutally hard game is impressive, something that only the top tier of players can aspire to.

Suzie, who lives in Norway, has slowly and assiduously become phenomenal at Dark Souls 3 while attempting to complete the game without getting hit by an enemy, a quest she's been on since October 2017.

Over time, more viewers turned into her stream. Sometimes, she said, they'd try to backseat-drive her run, which she attributed to her gender. She's gotten good at shutting them down. "I guess it's just a norm, which I think is kind of sad, but also kind of inspires you to change it," she said. Her successful three and a half-hour run is full of clean fights, deft dodging, and a lot of workarounds.

Sometimes, she'll take fall damage to boost her damage output, a buff from an item she carries.

Watching her finish the run is emotional. Suzie begins crying and shaking from joy:

On Twitch, the last leg of Suzie's run went minorly viral. The 265,000-strong LivestreamFail subreddit was joyous. A clip garnered over a thousand comments, mostly effusive ones. She says she earned over 2000 new followers in 24 hours. Megastreamer Sodapoppin even watched her completion clip with hundreds of his viewers.

"I honestly don't mind if they get that amazed by it, because that shows that we really, really need to change that line of thought," Suzie says of the reaction to her victory. Ideally, it wouldn't be so impressive that a woman completed a no-hit Dark Souls run, because it would be commonplace. "This is obviously the place to start."

"I want to tell [women] to do their very best to stop the stereotypical 'girls aren't good at games' thing and really show them that we are," Suzie said.

"That's actually the case. I just really want them to understand they can be, and don't ever be afraid to try. You don't become good at something overnight. You have to really work for it."