No, PUBG Is Not An ‘Asset Flip’

On Steam, “asset flip” refers to a game that’s haphazardly assembled from pre-purchased environments, objects, and sound effects for the purpose of making a quick buck. Or at least that’s what it’s supposed to refer to. Over time, the definition of “asset flip” seems to have devolved into “anything that ever uses a pre-made asset,” and is now a weaponised insult. Case in point: People have decided that PUBG is an asset flip.

Yes, that PUBG. Player Unknown’s Battlegrounds. The one that fired the starting gun on the battle royale genre’s hostile takeover of video games. Asset flip accusations have now become so pervasive that Brendan “PlayerUnknown” Greene said it “kills me a little inside” to hear them during an interview with Geoff Keighley last week at E3, and PUBG‘s communications lead Ryan Rigney recently took to the game’s subreddit to explain why a developer might choose to use pre-made assets.

Rigney said that PUBG has used pre-made assets before, but as a means of trying out ideas and figuring out how to make the game fun — a common gaming industry practice.

“The first thing to understand is that if you’re just starting up a team, you’ve got to lean on asset store work because that’s the only way you can spin up a game fast, and for a reasonable price, to quickly find the fun,” Rigney wrote. “Hiring an art team of 40 people to ‘try a game’ and ‘see if it’s fun’ is simply not a smart way to work — this is what the asset store is for! It’s a great resource for teams that want to work smart.” 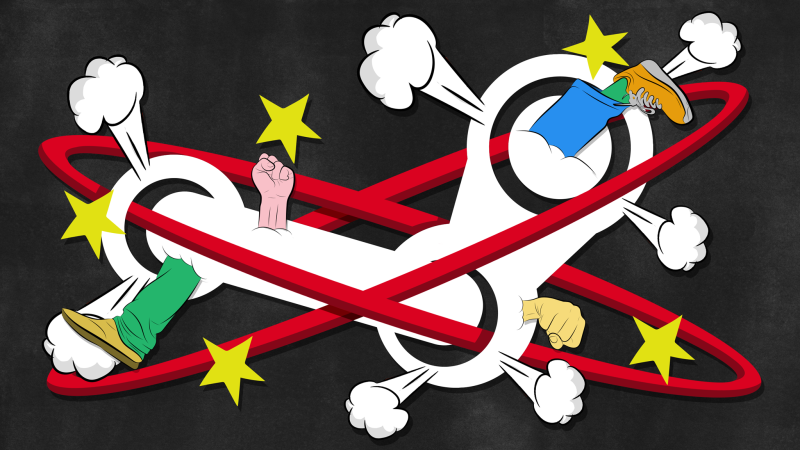 As PUBG grew and added an additional studio, the team was able to make more original assets and moved away from using store-bought stuff. However, in creating the game’s second map, Miramar, the team still used some prefab assets “strategically,” he wrote, and also re-used some originals from the game’s first map.

“One of our lead artists,” wrote Rigney, “puts it this way: ‘Why should one of my artists spend two weeks on a generic sculpt if they could instead spend that two weeks adding real value for players elsewhere? How many times should a telephone booth be modelled? How many times do we gotta sculpt a cash register?'”

It’s a pretty textbook application of an asset store — why should game developers literally have to reinvent the wheel? — but some players still insist that anything involving pre-made assets is an “asset flip” and therefore proof of their worldview that game developers are lazy and duplicitous. If you didn’t mould every playground slide and gymnasium locker with your own gnarled hands, you’re cheating.

This of course makes no sense. Is The Godfather an “asset flip” because the chair that Don Corleone sat in wasn’t made from scratch from a tree chopped down by the film’s production team? Is a song an asset flip because if it samples another song? Video games are growing in complexity at an exponential rate, and fans want those games to be updated with new content at a rapid pace. If the shoe fits, does it matter who made the shoe?

Unfortunately, given the discourse surrounding developers on Steam these days, this latest development isn’t really surprising. Actual asset flips have existed on Steam for years, largely as a means of preying on loopholes in Steam’s trading card and achievement systems. They clutter up digital shelves, but generally speaking, you’re not gonna see them on your main store page.

Steam’s algorithms bury the majority of them, though they sometimes sneak their way into the front page’s “new and trending” and “upcoming” sections. For the most part, though, they’re little more than an annoyance, unless they’re actively noxious, like Active Shooter.

You wouldn’t know that from listening to Steam users, some ostensibly “pro-consumer” critics, and — to an extent — Valve. Those first two groups, especially, paint asset flips as an epidemic, a poison working its way through Steam’s black-and-blue veins.

Why? Well, because a relatively small subset of developers are trying to fool Steam users, and even if they’re not really succeeding outside of users who seem to want trading cards and achievements — and therefore know what they’re getting into — this is a crime most foul against precious, innocent consumers.

But the defining down of “asset flip” gives Steam’s angriest users carte blanche to go on the offensive against developers they perceive as lazy and deceitful. And so they do. They bombard message boards and review sections. They make groups dedicated to doing those things more effectively. Sometimes they even track people down on social media, when that’s an option. They feel that they have a duty to police Steam, and if their behaviours verge on harassment or abuse, it’s warranted.

This can quickly spin out of control, as we saw with 2016&#39;s Digital Homicide fiasco — in which an aggrieved (and admittedly sketchy) developer tried to sue Steam users for $US18 ($24) million — or any number of other high-profile harassment controversies, like what happened to Firewatch after its developer called for copyright strikes against Pewdiepie last year.

Valve, meanwhile, has its own term for asset flips: “fake games.” The company has repeatedly claimed that “no real players” are buying fake games, but these games do confuse Steam’s algorithm. For more than a year, Valve’s been actively trying to thwart fake games by adding limitations to systems like trading cards and achievements.

Fair enough, but in doing so — and in failing to similarly take unilateral action against abusive users or other kinds of objectionable games — Valve has helped legitimise the so-called scourge of fake games and honest-to-goodness asset flips as Steam’s single biggest boogeyman.

This brings us back to PUBG. At least part of the game’s community is not pleased with where it’s at these days. There are still too many bugs, they say. Performance needs work, the option to select maps is in a bad state, old maps need tweaks, new maps need to be released, etc. The developers, to their credit, have tried to be more communicative on places like Reddit lately, but what they have to say isn’t always what people want to hear.

It’s a frustrating situation. Being frustrated sucks. It’s a lot more fun to be angry. A good way to justify anger is to call a game an asset flip and paint its developers as snake oil salesmen instead of dedicated professionals who are working as hard as they can, but whose entire company has been slowly building from the ground up over the course of a year. It’s much easier to yell at people when you convince themselves that they are snake oil salesmen, if not criminals of the highest order.

That’s what’s happening here. Yes, it’s patently ridiculous to call PUBG an asset flip, but accuracy isn’t the point. People like feeling angry — but even more than that, they like feeling righteous.