The Long Dark’s New Cooking System Is Too Real

Last month, snowy survival game The Long Dark got a new cooking system. Like in real life, it requires timing things just right. I couldn’t pull it off in my last game, as well as in most of my own home cooking.

The Long Dark added manual cooking in its June update. While you used to boil water or cook food in a menu, you now put items in a pot or on a hot surface.

After a certain amount of in-game time passes, your meal is done. Ostensibly this lets you do other things while you cook—read a book, repair your items—or you can cook multiple things at once, if you find a big enough stove. But it also means you have to keep an eye on your food, so don’t read a book for too long, lest your water boil away or your food get charred into an inedible crisp.

The new system feels more fiddly than the old one (I’ve accidentally eaten a lot of raw meat while trying to select it from the radial menu), but it makes cooking feel more tactile and slows down the pace of a game that’s already luxuriously slow.

In the real world, I’ve been trying to learn to cook. I tend to prep everything with exacting care; I chop all the vegetables and line up all my oils and spices, making sure I’m prepared. But I still get overwhelmed as soon as the actual cooking gets underway.

I have trouble staying in the moment and keeping up with the pace of things. I wish I could skip straight from prep to the finished meal, but that’s not how it works.

My actual time at the stove tends to be a panic of taking pans on and off the heat, some parts of the recipe getting cold while other parts burn. But other times, cooking is a waiting game, not a panicked rush.

That chicken in the oven is going to take as long as chicken takes, no matter how hungry I feel. If a cooking session goes as planned, I can use this unmovable baking time to do the dishes or put things away. If it doesn’t go well, then I spend that time lying on my couch, trying not to beat myself up for panicking.

The Long Dark’s new cooking system introduces this same unique pace of cooking time. Recently I explored Hushed River Valley, a new region of harsh wilderness that’s scarce on resources and shelter. It’s not a good region to start a game in, but I persevered out of curiosity. I was lucky enough to have a can to boil water in, though I didn’t want to waste my precious fire supplies on the mouthfuls I could boil.

My character grew exhausted as I wandered the area’s waterfalls and cliffs. I munched on cattails to fend off starvation as I vainly searched for wood and better food. I needed to eat, and I needed to sleep, but I couldn’t sleep unless I ate or I’d die. Yet I also couldn’t find more food unless I rested enough to climb out of the gorge I was in. The run was tense but thrilling as I kept managing to just barely push on. 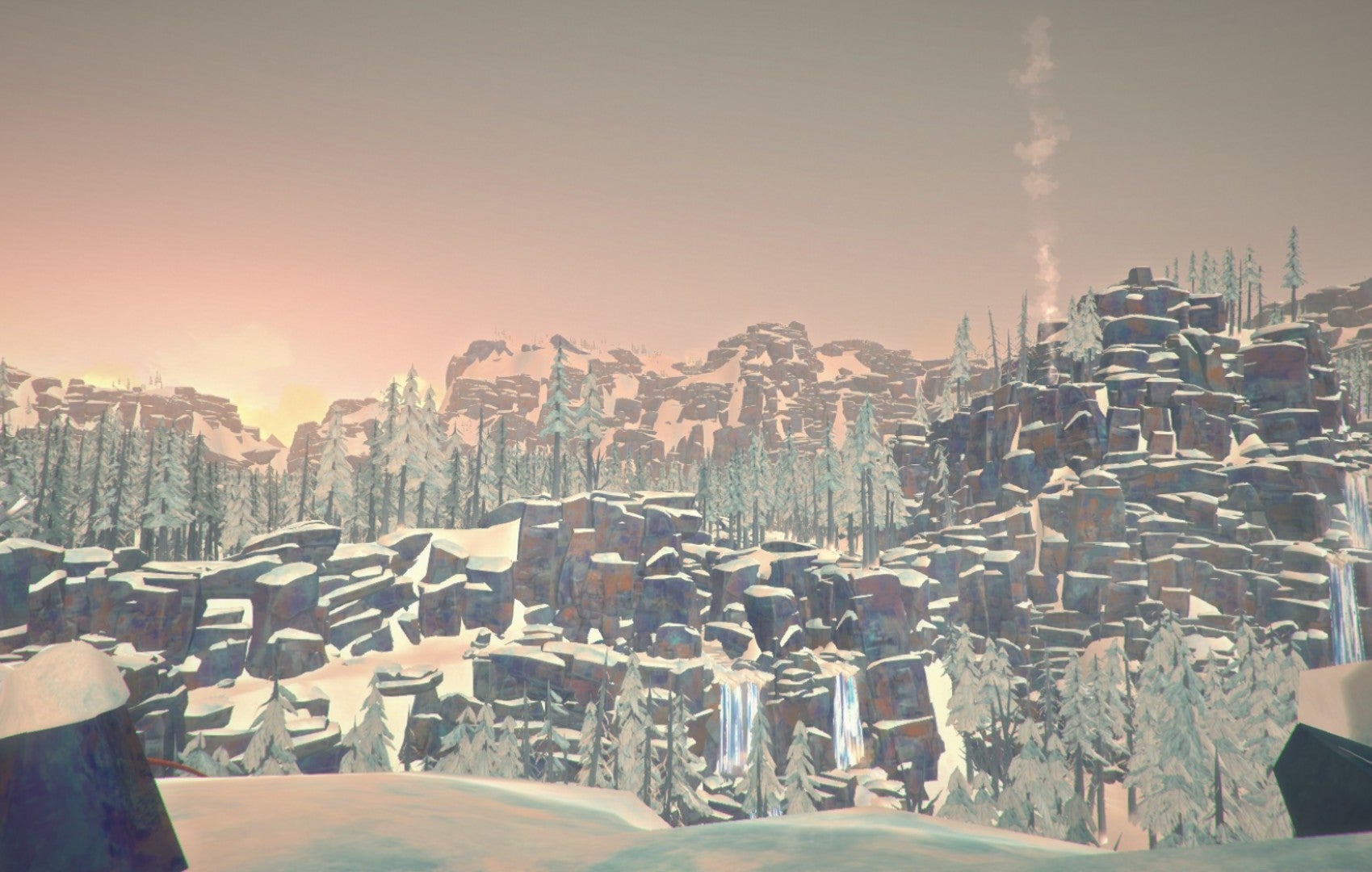 Then, I inched my way over a fallen tree and found a deer carcass with a few pounds of meat on it. I couldn’t believe my luck. I carved it up and trudged carefully back to a cave where I’d been storing all the sticks and coal I’d managed to amass.

I lit a fire, using a precious accelerant so I could guarantee that it would light, piling everything I had into the flames until it was roaring. I knew I was screwing myself for later by using all my resources, but I didn’t care. I found meat, and damned if I wasn’t going to feast.

Once the fire was steady, I dropped my two pieces of venison on the rocks. They would both take about an hour and a half to cook—one a bit longer, one a bit less. I sat and stared at them for a while, enjoying the crackling fire and the way I’d managed to outmaneuver disaster.

But then, just like when I cook in the real world, I skipped from cooking to “what next?” I figured I had just enough time to grab a bit of sleep, which would give my character the strength to climb out of the gorge and keep exploring.

The food might get a little burnt, I reasoned, and my hunger would be dire, but I could pull it all off. I plopped down my bedroll and set the timer for two hours. 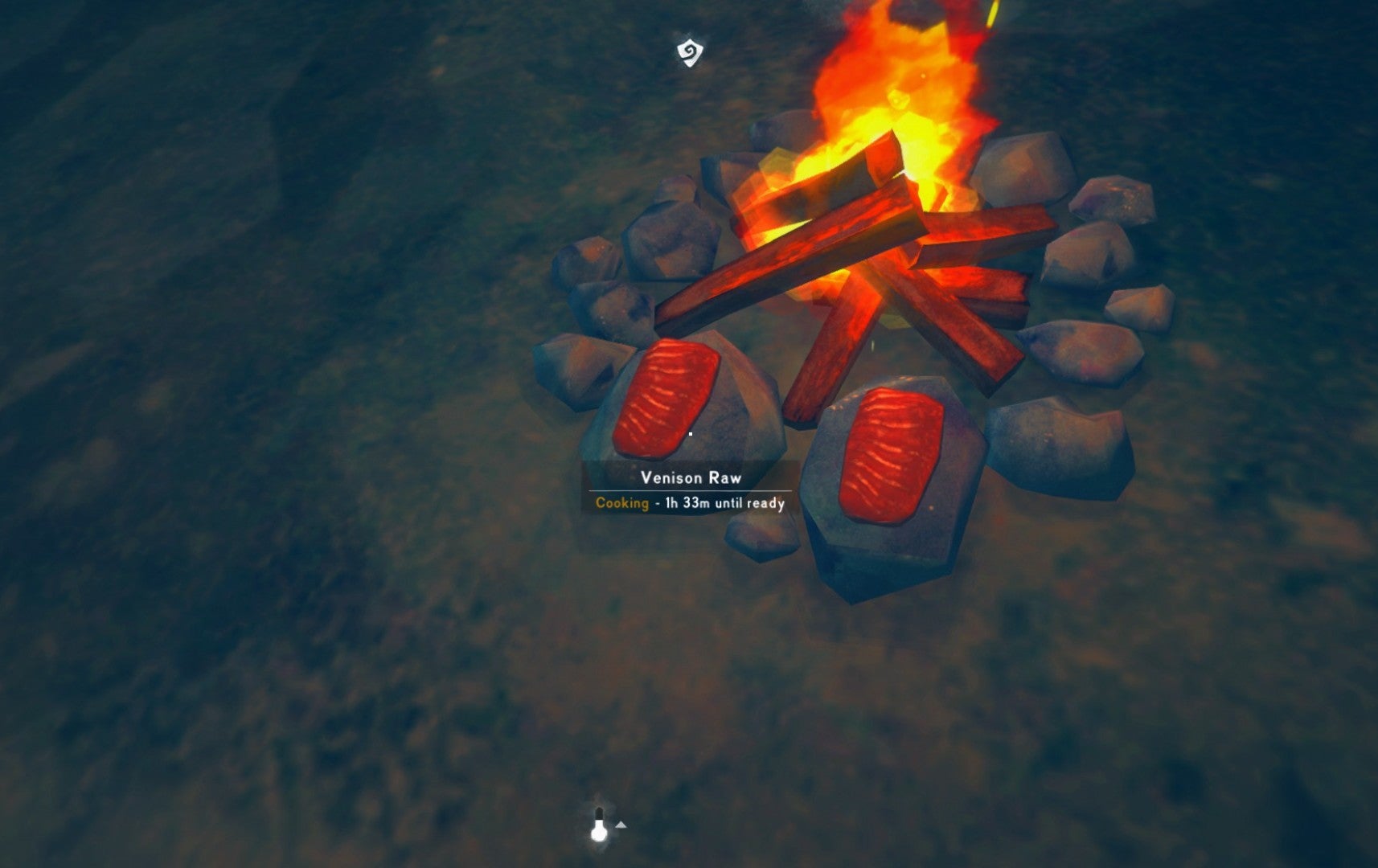 When I woke up, the game informed me my meat was now “inedible burned stuff.” I couldn’t believe it. I thought it would be fine. When you boil water in this game, you get a warning about how long you have until it burns. Maybe the game had warned me about the meat, too, but in my efforts to do too much at once, I hadn’t seen it.

Outside, the wind howled. Darkness set in. If there was another deer carcass out there, I’d never find it. I stared at the useless chunks of meat next to my roaring fire, all that fuel going to waste with nothing to cook with it.

I died not long after, starving to death huddled against some rocks. I felt the same way I feel when I screw up a new recipe in my day-to-day life: annoyed at myself and angry for wasting things. But just like when I cook, I knew I could try again.

My character would respawn elsewhere and find new food and fuel to use. This time, I would pay a little more attention and keep a better eye on my recipe. It sucks to throw away some ingredients or a good run of a game, but there’s always another chance.