If you spend any time on social media, then you’ve undoubtedly at some point found yourself exhausted, annoyed, and wondering if the internet was a mistake. Those of us who spend too much time staring at screens often joke about how we should never tweet or post and should perhaps just log off.

But what if we all took our tongue-in-cheek advice more seriously, and made a concerted effort to wean ourselves off the technology that’s become such an ever-present and demanding strain on our collective attention spans? What if we saw technology as a dangerous beast lying in wait just beyond the edges of our realities that had the potential to destroy the world with the same power that first transformed it? 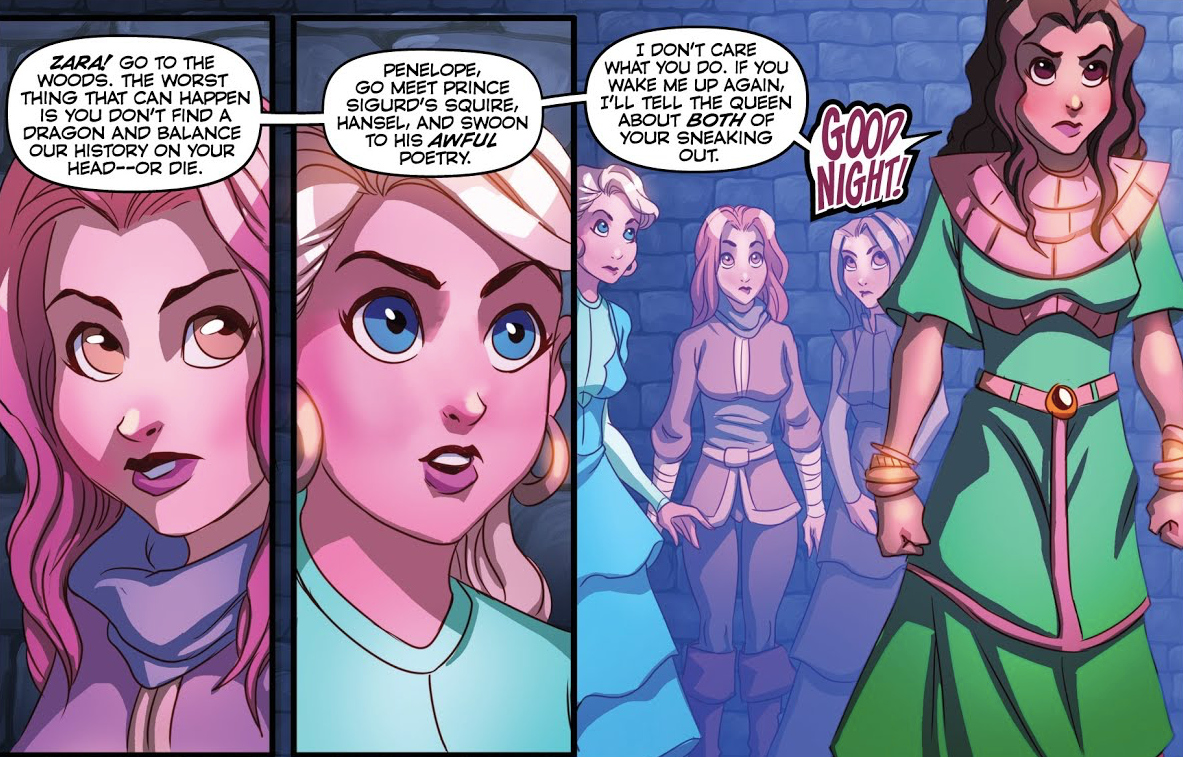 Four of Robots Versus Princesses’ titular royals arguing about whether or not to let one of them wander into the nearby forbidden forest. (Image: Nicolas Chapus, Dynamite)

Dynamite’s Robots Versus Princesses, from writer Todd Matthy and illustrator Nicolas Chapus, is the sort of genre-bending, gender stereotype-breaking YA series that should be way more common these days. Magical royalty with friendly forest pals and vicious robotic overlords are major pillars of the sci-fi and fantasy genres, and it makes all the sense in the world that they’d combine to make for an exciting comic book.

Set in the culturally-bifurcated world of Harmonia, Robots Versus Princesses tells the story of Princess Zara, a young girl who, unlike the rest of her sisters, can’t quite manage to work out how to will woodland creatures to help her complete tasks just by singing to them.

A large part of Zara’s frustration boils down to the fact that royals have already managed to sing-compel every kind of creature that lives in the forests of Harmonia — and she wants to set herself apart by managing to find a distinct animal best suited to her.

But Robots Versus Princesses is a story about technological might just as much as it is about the trappings of being a traditional, Disney-esque princess. See, Harmonia is at war with a race of menacing robotic beings known as the Decimators.

At the same time Zara is trying to find herself, a Decimator called Wheeler finds himself at odds with the ideology of his people and desperately wants to carve out a more peaceful path for his own future.

Their respective journeys will cause their paths to cross, and Robots Versus Princesses becomes a story that’s less about its rather straightforward title and more about the ideas the comic is playing with.

Rather than treating its juxtaposed genres as a novelty spectacle meant to illustrate the absurdity of how we gender fairytales vs. sci-fi, Robots Versus Princesses simply presents its world as something we shouldn’t marvel at for the sake of it.

Magical kingdoms and Cybertronian-inspired empires can coexist simultaneously — and in doing so, they can resonate strongly with an even broader audience. (Todd Matthy, Nicolas Chapuis, Dynamite) 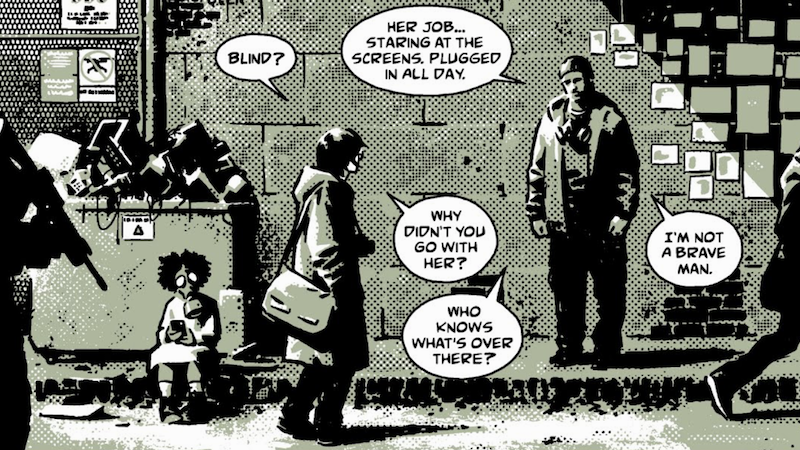 Journalist Astra wandering the slums and speaking with a stranger whose partner abandoned him for the technology-free part of the world. (Image: David Aja, Dark Horse Comics)

If presented with the opportunity to give up all of the digital connections tying you to the rest of the would, would you take it?

Dark Horse Comics’ Seeds, from Ann Nocenti and David Aja, imagines a world on the brink of ruin that’s divided along a fierce cultural line. On one side are a new breed of extremist Luddites who live in a sequestered community completely devoid of modern technology; on the other are those who still live connected lives and tell horror stories about the evils that supposedly live on the other side of the wall that divides the two groups.

The Seeds’ societal division serves less as a straightforward plot device that drives the story forward and more as an ideological framework that contextualises the motives of its heroes: Astra, a journalist who begrudgingly writes pointless, sometimes factually-inaccurate content while dreaming of breaking hard-hitting news stories, and Race, an alien sent to Earth on a mission to collect some of the planet’s last viable seeds for a galactic seed bank.

Though they lead drastically different lives, Race and Astra are similar in that they’re both people capable of seeing things in shades of grey despite the ways in which the worlds they live in are defined in black and white.

Astra’s willing to chase airless stories because she understands that, at the end of the day, her job is a means to an end and not something that defines who she is as a writer. Race, on the other hands, knows that he’s meant to be on Earth working, but he can’t help but fall in love with a human, something that could potentially expose him as the alien he is.

Aja visualises The Seeds’ stark contrasts and competing ideologies with striking, monochromatic illustrations that challenge you to appreciate both the precise details he incorporates into every panel, and just how much of that detail comes from his careful use of positive and negative space. (Ann Nocenti, David Aja, Dark Horse Comics)