Shenmue I and II’s HD remasters released on Steam and I’ve been playing it ever since.

Yu Suzuki’s 1999 adventure game helped set a standard for open world exploration. Its secret is simple: lots of and lots of “pointless” but satisfying interactions.

One of Shenmue’s key features was an explorable open world with NPCs to meet and rooms where you could rummage. We take this for granted in games today, but when Shenmue released in 1999, there hadn’t really been a 3D game world with as much detail.

The Ultima series had many of the same features – characters with daily schedules, a day and night cycle, houses to explore—but this was one of the first times it had been done with such fidelity. Many of the finer details seem pointless by modern standards. What use is it to open a closet if you’re not going to find spare crafting materials or sellable junk? But these seemingly pointless interactions are essential to making Shenmue’s world feel like a real place.

Protagonist Ryo Hazuki is clumsy to control. He turns slowly and lumbers forward like a tank. In first person mode, it is all but impossible to make his head stay still. The player never completely has control, but that clumsiness helps you feel like you’re inhabiting a real body.

A real body demands real spaces; Shenmue’s solution to crafting real spaces is to make them dense. You’re able to interact with nearly every drawer or door you find in the game. Ryo’s bedroom alone has thirteen interactable objects, from his alarm clock to each individual drawer of his bureau. Attentive players will find a cassette player, two tapes, and a photo of his friends to carry on their adventure. Shenmue adores clutter and encourages players to interact closely with every new space they enter. 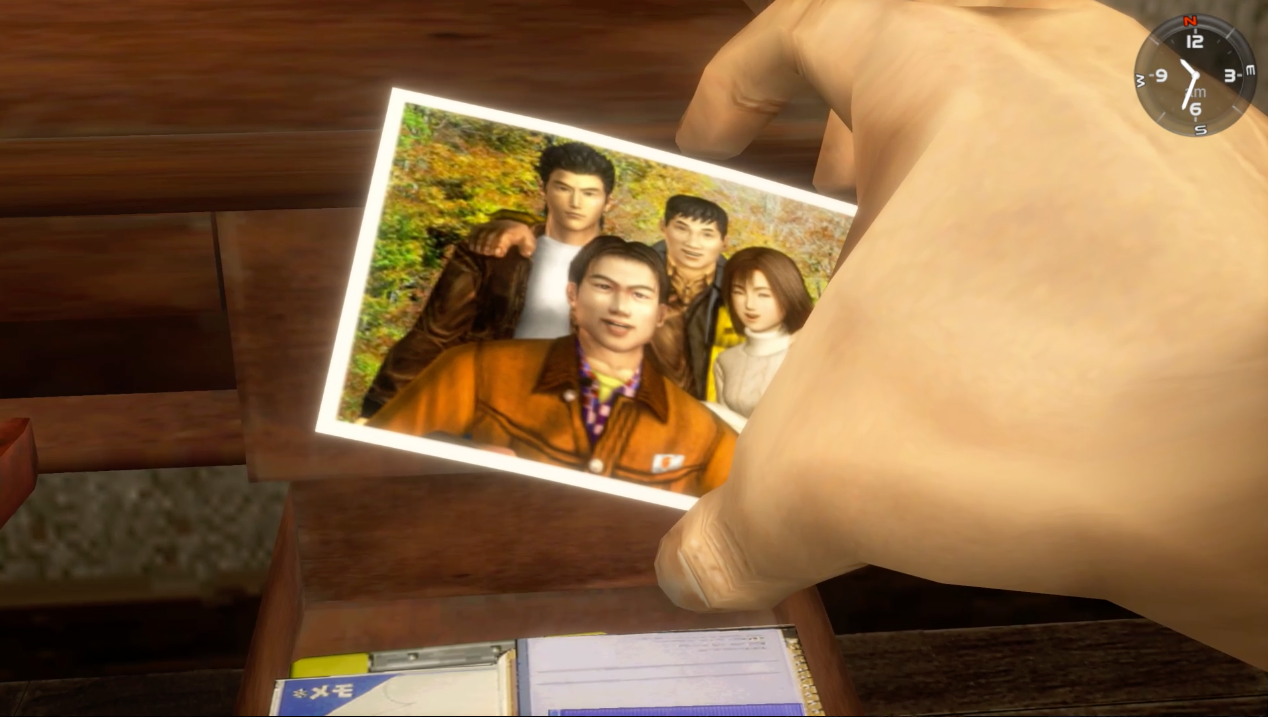 This often grinds pacing to a halt. To take an item from a drawer, for example, players need to enter first person, wrestle the controls to look at the drawer, open it, look at the item, pick up the item, choose to take the item, and close the drawer.

Most of the items you find have no practical use. Yes, there are mysterious keys to find, but the game cares just as much about the countless capsule toys you can collect. Things exist in Shenmue for the sheer joy of existing. The world is mundane but intimate. The excess tangibility helps root the player in the space and believe in the characters’ lives.

Exploring the Hazuki Residence feels warm and knowable. You can grab milk from the fridge or rummage for your Sega Saturn. Sneaking into Iwao Hazuki’s room feels like intruding in your dad’s office space.

Shenmue is mostly remembered today for memetastic voice acting and the coining of the term “quick time event.” But returning to its world—and all its frivolous interactions—reminds me of just how important it was in establishing how to make video games feel genuine and real.