Not too long ago I heard about a Warhammer 40k card game on smartphones. I decided, as part of my fool’s errand to try to wrap my head around the new explosion in Warhammer video games, to check it out. What I found was a competent game made irresistible by how unflinchingly metal it is.

At first glance, The Horus Heresy: Legions (say what?) looked like trash—not in a uniquely bad way, but in the way all free-to-play smartphone games appear at first to resemble inchoate messes.

It turns out it’s Warhammer-y as fuck though, filled with clanking metal and grimey blood splatter. I find it somewhat repulsive, not uncommon for a series that revolves around brutal endless war fuelled by dark magic and religion, but in a way that’s only fuelled my morbid curiosity and has kept me going back. 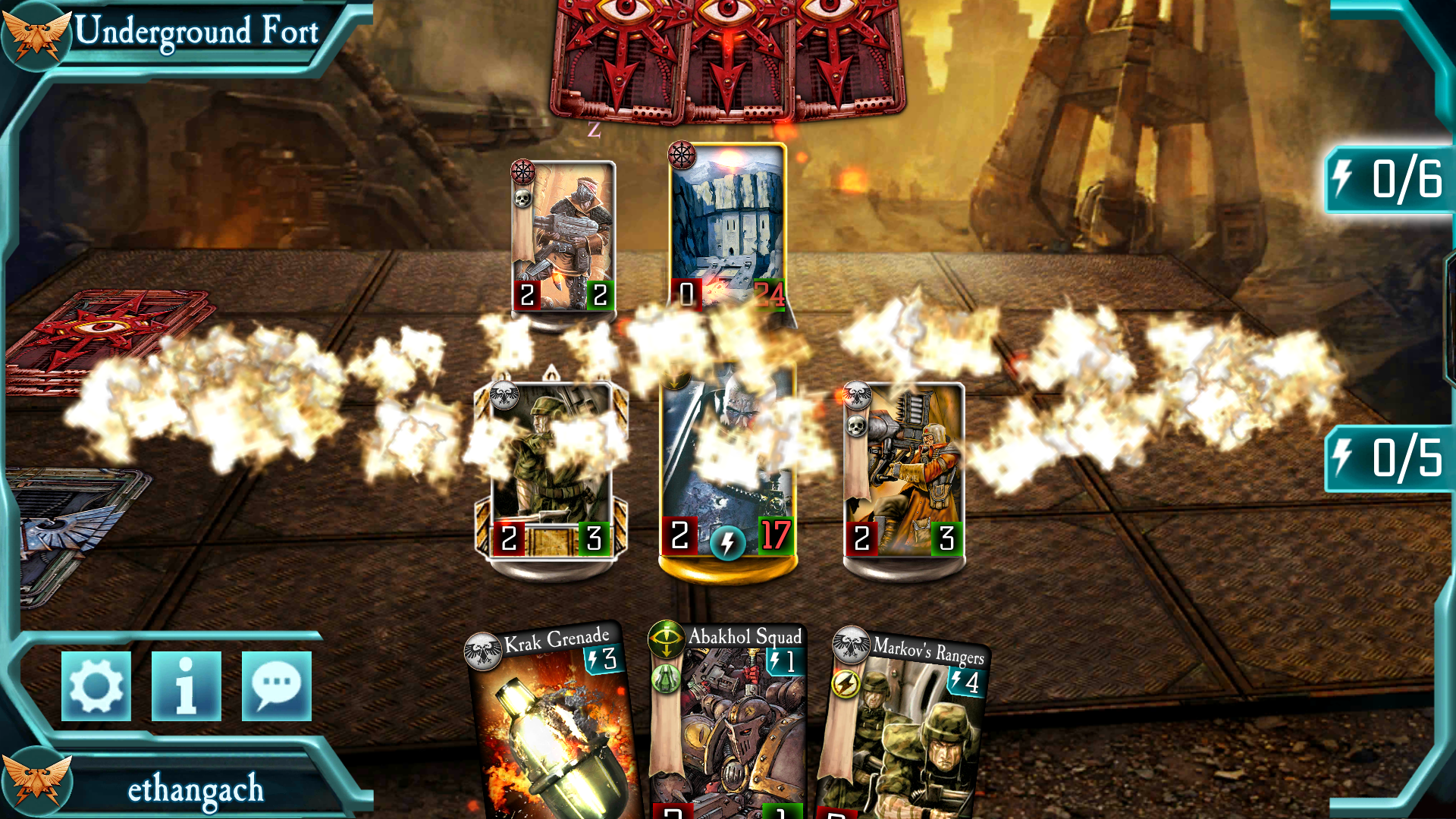 Legions doesn’t drastically mess with the card game formula established by Hearthstone. Every turn you start with one more energy than you had before, which can be spent on playing cards that either summon attack units or raining down hell with bombs and artillery fire.

Each side has a hero that acts like any other unit except it’s stronger, has a special ability that’s free to use each turn, and must be protected at all costs lest it die, at which point you lose.

Unlike the brightly-coloured, inviting Hearthstone, Legions feels almost aggressively unwelcoming. Not in a “get out of here and don’t come back” sort of way, but rather more like walking into a dirty bar. The UI feels like something cooked up in MS Paint, but the bulk of this grizzly aesthetic is evoked by the little flourishes.

Battles, at least in the beginning, take place atop play areas consisting of textured sheet metal and muddy asphalt. The damage taken by your units is conveyed by large blood stains that appear with a visceral pop. Gun fire wages constantly since that’s how most units deal their damage, and between rounds side characters say stuff like “I pity those poor heretics’ souls” before your soldier tokens blast the heretic tokens away.

Every time I open up Hearthstone on my phone, a dwarf heartily cries “Welcome back!” as the organic swinging of a wooden door shephards me into a tavern out of a Thomas Kinkade painting. That’s fine—it’s nice to feel loved by fictional beings cribbed from a thousand other fantasy worlds. Occasionally, though, I need my thoughtful deck-building to be accompanied by existential dread and pronouncements of apocalyptic doom for my enemies.

Every month a new Warhammer video game pops up, and as a result it’s hard for me not to feel a bit cynical about all the studios trying to cash in on the licence. But then I actually play one, even one as simple and familiar as Legions, and realise I want that particular flavour for every possible game.