In the PS4’s very good new Spider-Man game, Peter Parker spends a lot of time web-swinging through Manhattan in pursuit of truth, justice, and collectables. As he flings himself about, he frequently gets calls from friends on his radio, and he responds differently depending on whether or not he’s exerting himself.

I bought Spider-Man when it came out last Friday. Right from the start, I noticed that when Peter talked on his radio while swinging, he sounded a little strained, like he was exerting himself. Then I noticed that when he talked on the radio while standing still on a rooftop, he sounded like he was standing still. Was I hearing things, or was the game quietly switching between two different voice takes behind the scenes?

I decided to test it. I finished a quest, then listened to the subsequent open-world radio chat while standing still. Then I quit out of the game, reloaded my checkpoint, and listened to the same audio tracks while swinging around. The results clearly showed that, yes, there were two different vocal tracks happening. I put them together in a video and tweeted it:

Today in Ridiculously Polished Video Games: Spider-Man seamlessly switches between two different vocal takes depending on whether or not he's exerting himself pic.twitter.com/3KRXOZnihU

That was actually an incomplete video, since it didn’t show the transition between the two vocal states. If you’re swinging during one line, then land as the other person is talking, Peter will switch to his more grounded, relaxed way of speaking for the second line, as shown here:

It transitions mid-conversation, though I dunno about mid-line-read. Here's the best example from what I have capped: pic.twitter.com/BT3aEssGSL

It’s a pretty cool little detail, and the Tweet got shared around enough that some of the developers from Insomniac showed up in my mentions and elsewhere to explain more about how they made it work. “So for those of you wondering if we recorded #spidermanps4 open-world Spidey dialogue twice—yes, we did,” Tweeted lead writer Jon Paquette.

“One ‘resting’ take, one ‘exerted’ take. Programmers exposed a variable to Wwise allowing the game to switch between dialogue assets, depending on the player state.” (Wwise is a development tool used for game audio.)

“It can happen mid-conversation on a per line basis, but not in the middle of lines,” further elaborated Insomniac audio designer Alex Previty. “We tried to set that up, but it would have been a lot of work to get it to sound natural”

“I can’t take credit for this system at all!” Previty continued, saying that he’d instead give credit to Paquette, director Bryan Intihar, and voice-actor Yuri Lowenthal, “as well as the talented dialogue folks at Insomniac and Sony to make the magic happen … and our insanely talented programmers to get it all working properly.”

“It’s been a group effort of the highest level,” chimed in voice-actor Lowenthal. 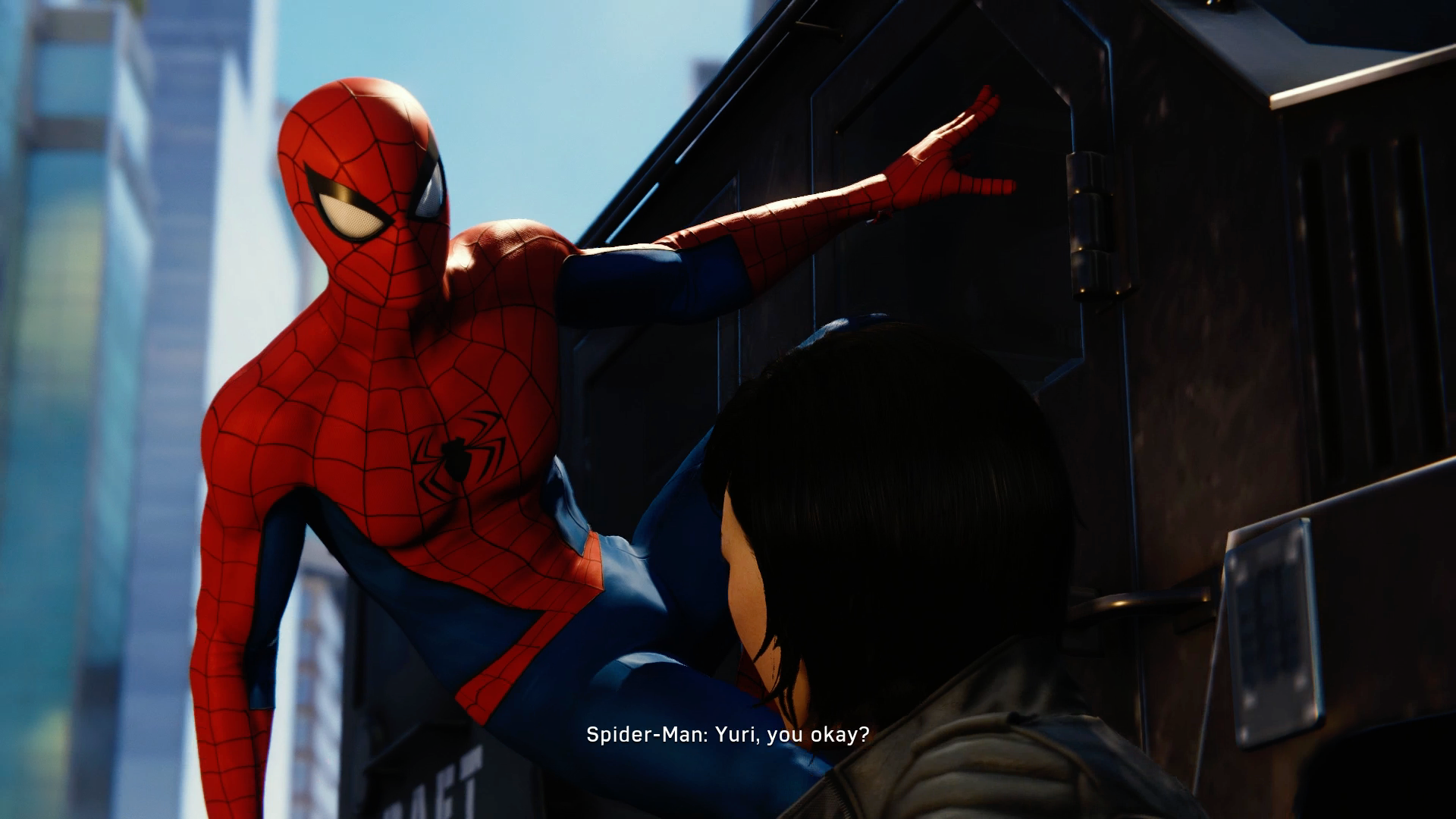 Another pair of fun details: Spider-Man voice actor Yuri Lowenthal spends a lot of time in the game addressing a character named Yuri, who is actually played by his wife, actor Tara Platt.

The voice-switching trick strikes me as the kind of thing that isn’t exactly rocket science on a technical level, despite how cool it seems when you notice it and point it out. By highlighting it, I’m not suggesting that Spider-Man is doing something completely revolutionary, but Insomniac’s approach does strike me as unusually slick and far-reaching, especially for an action-adventure game like this.

The switching of vocal tracks works particularly well when combined with some of the other smart dialogue tricks Spider-Man uses. One of those includes the way Peter realistically resumes conversations or dropped calls after they are interrupted by the player, similar to systems seen in Grand Theft Auto V or this year’s God of War.

If you pause or otherwise interrupt a conversation, he’ll take the next opportunity to call the person back and resume the conversation with something along the lines of “OK, so as I was saying…” These are just a couple of the many small, carefully crafted details that make Insomniac’s superhero simulation a bit more believable, and a lot more impressive.