Sometimes you watch a movie and instantly know it’s something people are going to watch and discuss from this moment in history forward. Panos Cosmatos’ Mandy is exactly that and we absolutely loved it.

On the surface, —is not a surface filmmaker. Like a painter with a canvas, that plot is just the base level. On top of it, layers upon layers are added, thematically, visually, and sonically. The resulting film is sumptuous and, somehow, almost delicious.

How can a film be “delicious,” you ask? Mandy is so evocative and colourful, such a feast for the eyes and ears, it really approaches that. Cosmatos and his cinematographer Benjamin Loeb have created a prismatic, lush film. Every frame looks like it was created with a dozen colour filters to give it a unique, almost tangible, hue. One frame will be bright blue. The next, deep red. Later, light orange, purple, and green show through, and there’s just a sense that, upon multiple viewings, many deeper meanings can be read into the specific choices of the colours in each scene. And even if they can’t, they look absolutely gorgeous and help drive the story, especially in multiple long takes where we’re left to really think about what we’re watching for long periods of time.

The score, by late composer Jóhann Jóhannsson (to whom the film is dedicated), adds another crucial layer to the film. Mandy doesn’t have a lot of dialogue in it, so for most of the film, the moody, synth-heavy music stands in for the emotions and thoughts of the characters. It’s effective and intense, but also kind of toe-tapping, and will make you miss Jóhannsson (who also scored Arrival, The Theory of Everything, and Sicario) that much more.

None of that would matter, though, if the story and performances weren’t up to the technical mastery of Mandy. Thankfully, they are. 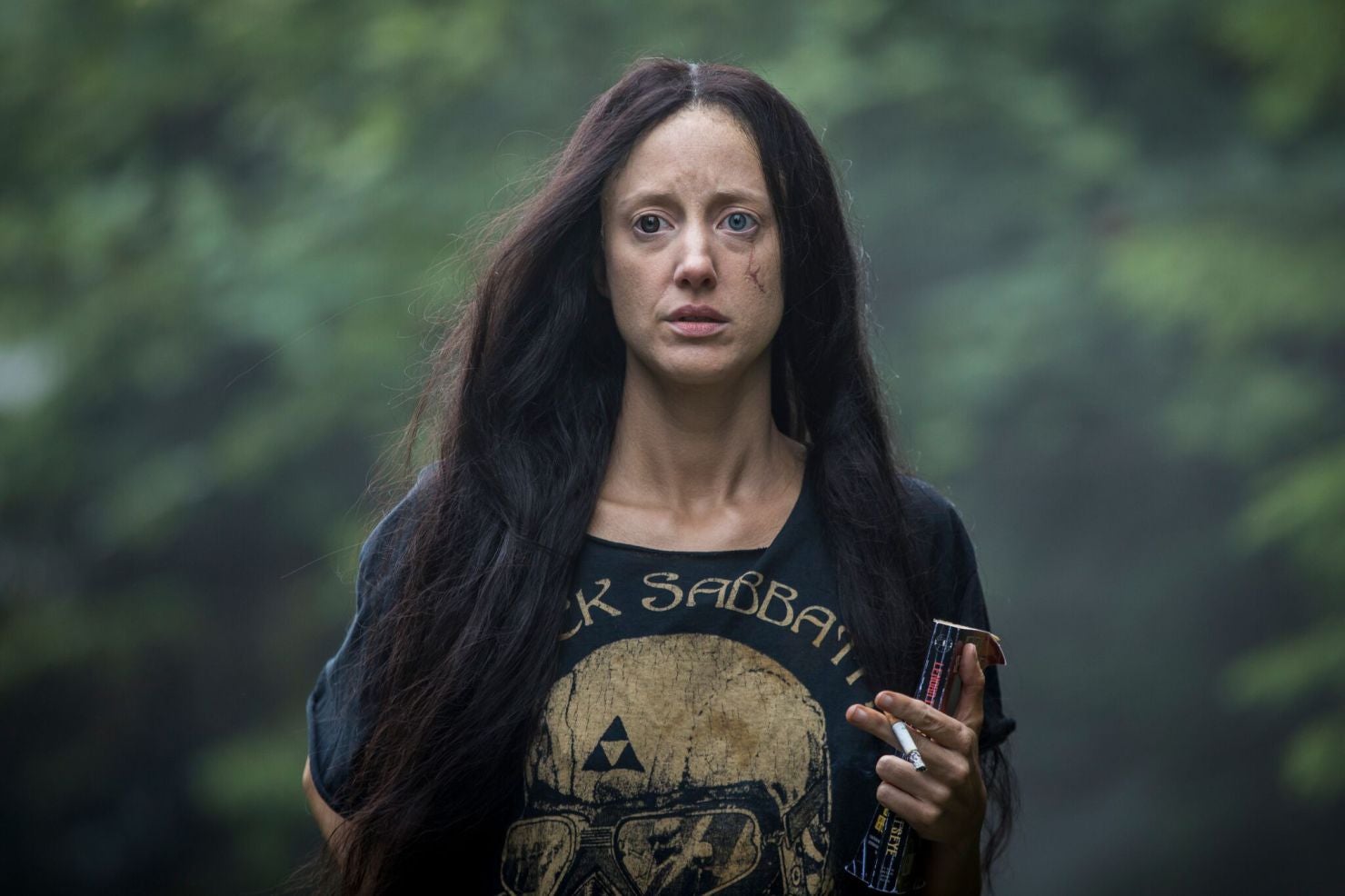 one of the most famous and critically acclaimed actors of a generation, in recent years he’s dialed back his mainstream output for lighter fare that really buys into his manic mystique. With Mandy, he not only embraces that persona but fuses it with the intense emotion and range that made him a household name. It’s maybe the quintessential 21st century Cage performance: a guttural, impressive, focused turn that anchors and elevates the movie.

Andrea Riseborough, despite being the title character, doesn’t have as much to do as her counterpart, but her performance is no less magical. Through her, Mandy is a mystery. She has a calm, innocent, almost ethereal presence that makes you feel like she’s better than all of us, knows it, but sympathizes with us. That’s primarily conveyed through Riseborough’s eyes, but also her calming voice and stoic movements, not to mention an impressive wardrobe of rock n’ roll t-shirts. 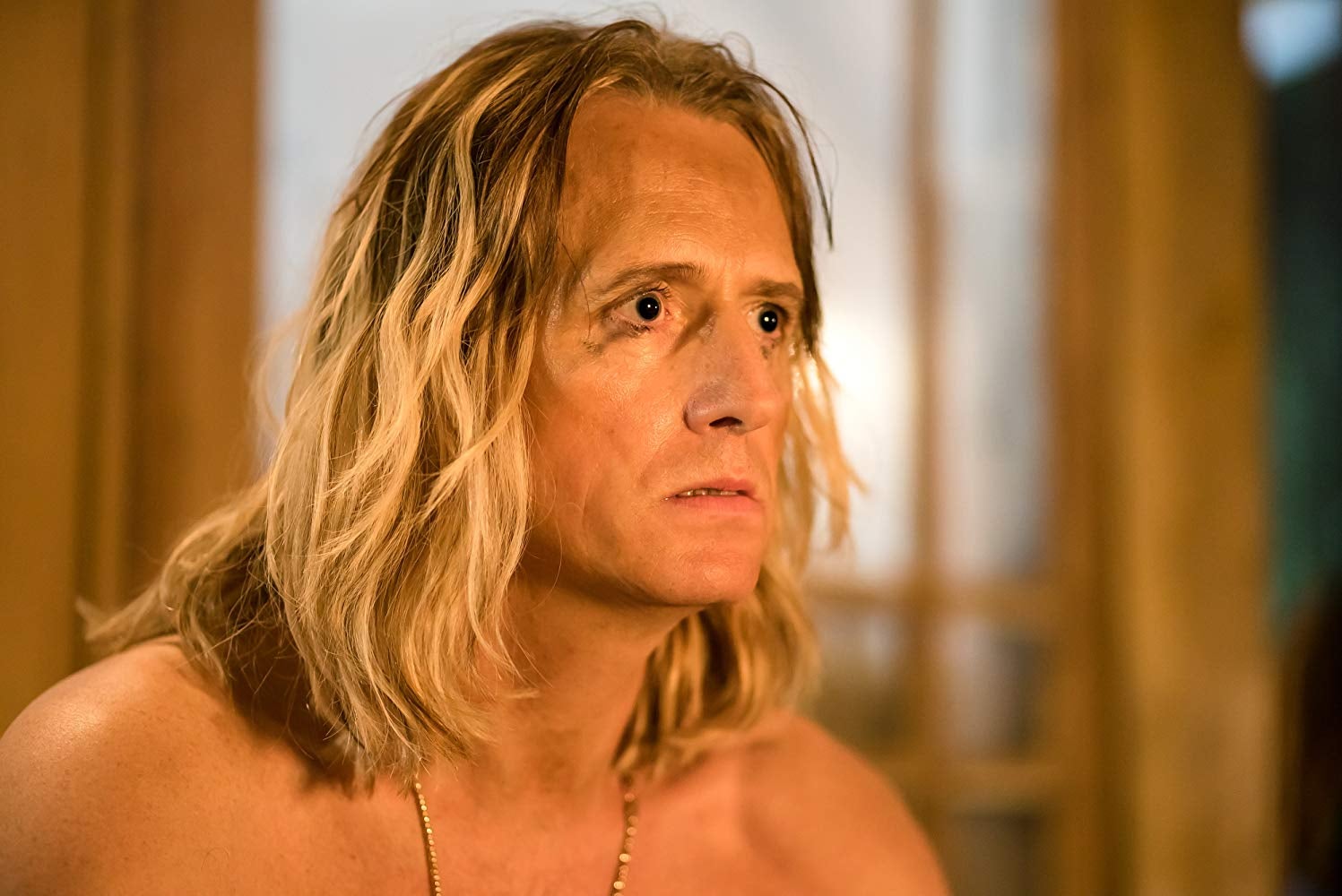 Thomas Wayne in Batman Begins, and here, the actor bares all (literally) as the cult leader who has so much going on behind his gaze that you understand why people simultaneously follow and love him, but also fear and despise him.

Oh, and did I mention that Mandy is also fucking badass? This is a revenge story, after all, and as the film moves along with its patient, consistent pace, eventually Cage does get to murder people in some very memorable ways: using an incredible custom ax, engaging in a chainsaw fight (that’s two people, with chainsaws, fighting), and ensuring several other gloriously bloody exits. 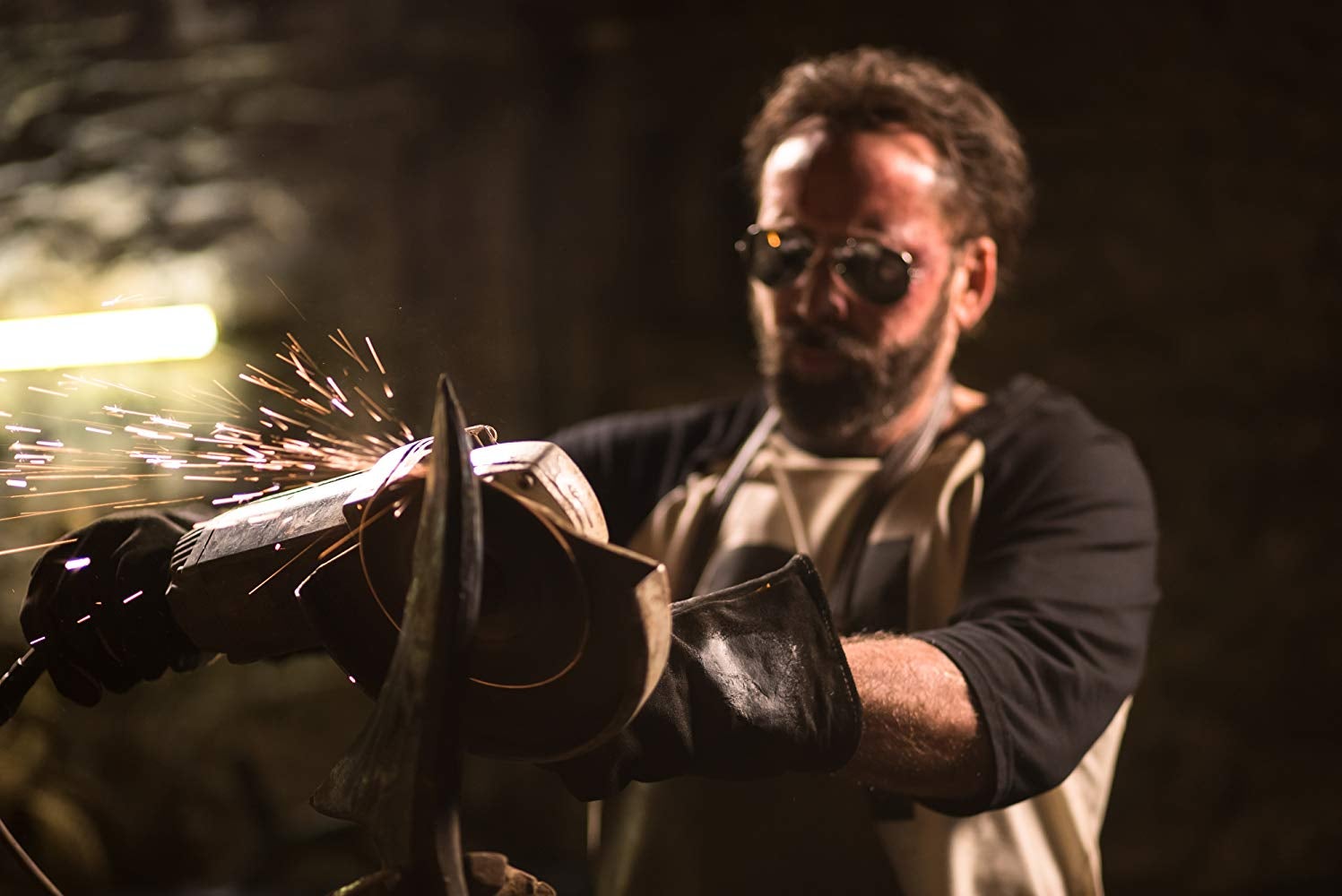