Red Dead Online Is So Busted Horses Are Flying And It’s...

Castlevania’s Second Season Is A Surprisingly Slow-Burning, Yet Compelling, Continuation 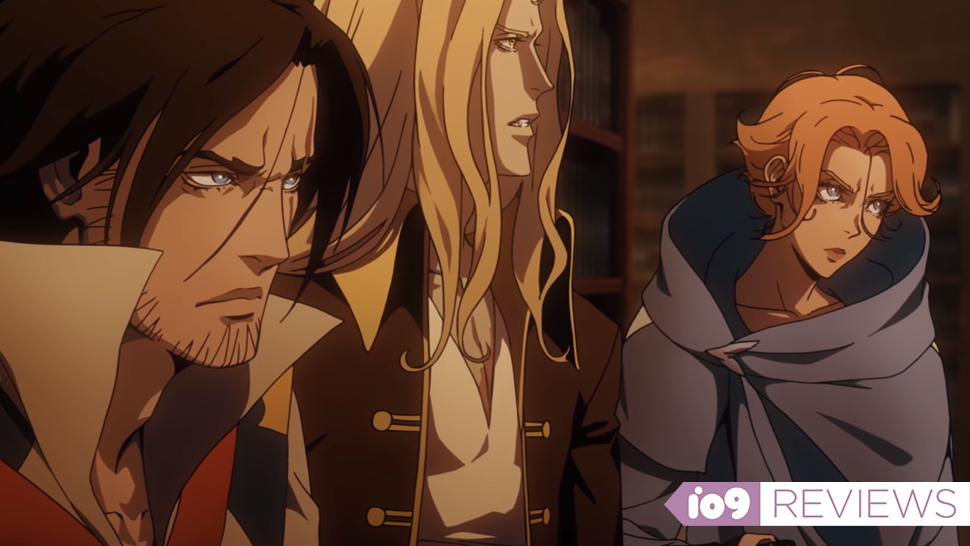 The first season of Netflix’s Castlevania took us all by surprise when it offered a short, sharp, and deliciously bloody animated take on Konami’s classic gaming franchise about eating meat hidden behind walls and whipping monsters to pixely bits. Its sophomore season is equally surprising — for very different reasons.

Unlike the bite-sized, four-episode debut, Castlevania‘s second season — out today on Netflix — is twice as long, making it feel almost epic-lengthed in comparison. While a lot of what made the first season so intriguing remains, that extra four episodes of adventuring for Trevor Belmont (Richard Armitage) and his new best buds Sypha (Alejandra Reynoso) and Alucard (James Callis) isn’t necessarily utilised how fans of the first season might want it to be.

Instead of another eight episodes of high-octane animated hyperviolence, the vast majority of Castlevania season 2 is melancholic, atmospheric, character-driven tale. The brutality this season’s video game-inspired action comes in staccato strikes rather than ceaselessly gushing out like blood from some hapless medieval peasant trapped outside on a horrible night to have a curse. 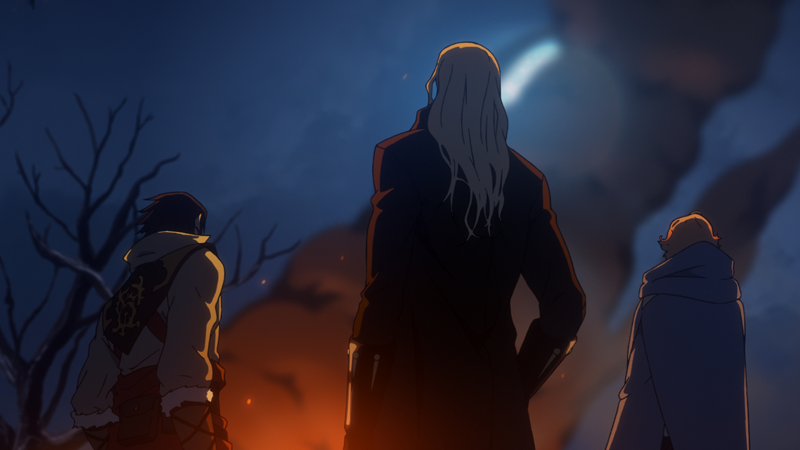 Our heroes take a bit of a backseat for much of the season. (Image: Netflix)

Season 2 is set in the immediate aftermath of the first season — which concluded with Trevor and Sypha discovering the reclusive Alucard, the half-vampire son of Dracula (Graham McTavish), underneath the besieged town of Gresit, and agreeing to help him stop his father’s vengeful quest against humanity. Castlevania season two is less focused on the story of Trevor learning to be slightly less of a jerk and more focused on fleshing out its vastly expanded cast of characters, both heroes and villains alike.

Thes story given to our heroes is about on how this quirky mishmash team made up of a nomadic sorceress, a distant half-vampire, and a charmingly garrulous monster hunter will actually work together as a group to defeat Dracula once and for all. It’s surprisingly light at times given Castlevania‘s grimly gothic overtones.

Trevor and Alucard snipe at each other like teen boys and Sypha tries to make the pair get along, while they seek the knowledge they need from Trevor’s vampire-hunting family line to defeat Dracula’s hordes. But it is also surprisingly slight, which might annoy fans looking to see the trio mostly kicking arse and taking monster names — much of the heroes’ story this season is spent travelling and exploring rather than fighting.

When there is a fight, it’s very fun to watch, but the action takes a backseat to the pleasure of watching these characters form an endearing bond with each other as they prepare to confront Dracula. 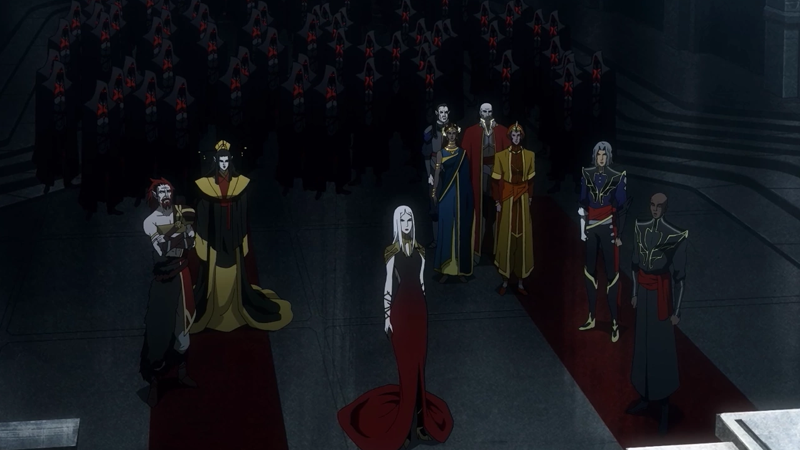 The generals of Dracula's forces play a huge part of season 2. (Image: Netflix)

Trevor, Alucard, and Sypha’s story often feels more like the subplot of the season rather than its main thrust. Instead, much of Castlevania season 2’s focus lies with its monstrous villains. We get to spend time with Dracula and the group of generals that lead his demon-filled armies.

These generals, a mix of new characters to the show (including Peter Stormare’s Godbrand, an incredibly Peter Stormare-y vampiric Viking) and some other villains familiar to fans rooted in the intricate lore of the games — mainly Carmilla (Jamie Murray), Hector (Theo James), and Isaac (Adetokumboh M’Cormack) — form the backbone of the season’s primary drama, as all the prerequisite backstabbing and political intrigue needed of any fantastical Game of Thrones-ian court of characters comes to the fore, with each general vying for dominance and Dracula’s approval.

The backdrop to all that courtly drama, and a major presence throughout the show, is Dracula himself. But rather than the wroth-laden monster we saw tearing through peasants in the first episode of season 1, the Dracula we spend time with in season 2 is almost utterly consumed by the grief that remains of losing his wife Lisa Tepes — who was burnt at the stake for the crime of being a scientist in the show’s earliest moments.

There is a melancholic sense of apathy to everything Dracula does in this season — or really, what he doesn’t, as he spends much of his time brooding alone, outside of a particularly gory flashback sequence, while his aforementioned generals squabble among themselves.

It’s in equal parts an even bigger brake on the show’s already pretty tepid pace (especially combined with the quieter plotline of Trevor, Sypha, and Alucard), and a compelling character examination of just how utterly despondent and broken this version of Dracula has become, the further his wife’s loss passes deeper into time. 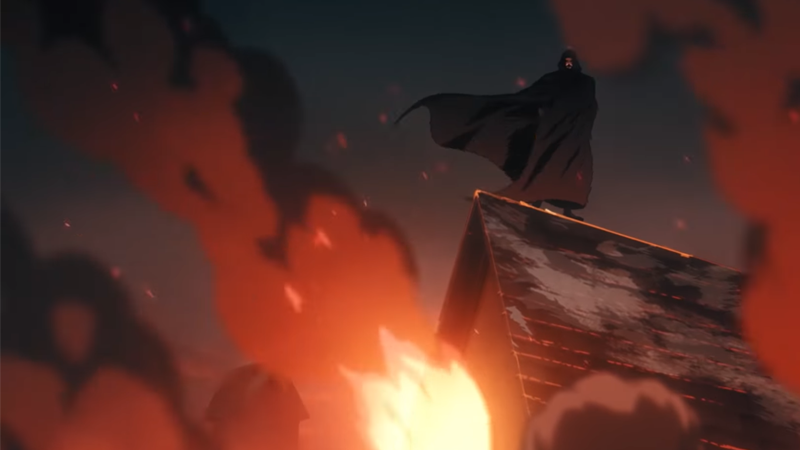 Flashbacks to a more active time in Dracula's life are few and far between, as he mostly spends his time honing the very Gothic art of brooding. (Image: Netflix)

This slow-burning, character-driven pace and a loosened emphasis on the guts and gore of the first season might, at first, feel a bit disappointing to fans who embraced Castlevania‘s kinetic, blood-curdling action. Although all that is still there, along with the show’s earnest, bordering-on-overboard, commitment to the gothic aesthetic of the games, it comes in moments few and far between these scenes of heady banter and introspective character work.

And as dramatic and fun as that character work mostly is, a lot of it is ultimately inconsequential to driving Castlevania‘s primary plot along.

That is, until the final two episodes, in which things finally kick into gear as both Dracula’s cohorts and our band of adventuring heroes make their moves. These two episodes have more of the first season’s grandiose action — and a few extremely great moments for fans of the games — managing to triumphantly escalate the conflict simmering across the entire season, while also setting the stage for future battles and adventures.

But the highs delivered in these climactic episodes only reach so high because of the methodical-to-a-fault pacing of the rest of the show. It might take a while to get going, but when it does, Castlevania proves it still really knows its way around a twirling whip or two. 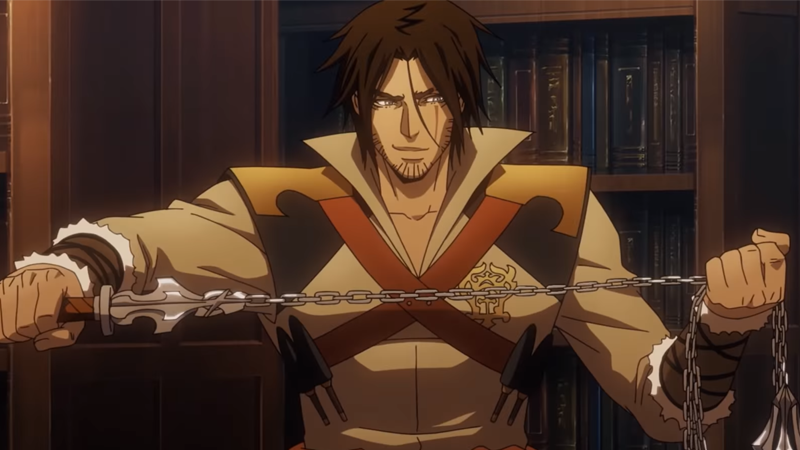 There's more than a few fun callbacks to the classic games — like Trevor's ultimate upgrade to the Vampire Killer whip. (Image: Netflix)

Beyond the what the back half sets up for Castlevania‘s future, overall this second season marks a big evolution for the series — not in tone or style, but in scope and pacing. It’s more measured and, at times, frustratingly slow. But in slowing down a bit, the show gives us an intriguing chance to learn more — and ultimately care more — about Castlevania‘s world and characters, beyond just Trevor Belmont’s simple quest to be less of a lone wolf arsehole and maybe defeat some monsters (and also not get his testicles kicked in).

In both Alucard and Dracula’s shared story of familial grief, and the intrigue and machinations of Dracula’s generals developed this season, Castlevania finds a surprising amount of heart in its supernaturally monstrous figures.

It comes at the cost of so strongly focusing the action and brutality that made the first season a kickass delight, but honestly, that’s a small price to pay to set up a world and characters we can actually give a damn about when the blood starts spilling all over again — and we can’t wait to see where it will go next.