The haunted-mansion horror game Betrayal at House on the Hill is an easy, irresistible pitch for board gamers: You explore a mansion, creepy stuff happens, you unearth possessed items, then somebody turns evil and y’all have to kill them or something. Last week, publisher Avalon Hill released Betrayal Legacy, a “campaign” style variant of the classic that’s played over 13 60-minute sessions. I’ve played two of them and it’s great so far.

Legacy games stretch out traditional board games into ongoing campaigns, played over many sessions. They’re meant to be played just once through, since the story can be spoiled and since players are constantly making permanent alterations to the games’ components.

But that one campaign can last weeks or months. Over time, new win conditions or player abilities are revealed, subverting or expanding on what makes these games great. For Betrayal, this format couldn’t be a better fit.

Released in 2004, Betrayal at House on the Hill has become a classic powered by its narrative-making ability. As the players explore the house, placing new floor plan tiles down as they enter a new area, they encounter horrific events, mysterious items (sometimes cursed) and omens. Once there are enough omens, something called the “haunt” starts. Depending on what omen occurs where, players are thrust into any of 50 “haunt scenarios” which turn one player against the others in a humans vs. supernatural battle with different win conditions. Betrayal narratives can get gnarly.

Once, a friend’s future incarnation handed her present one a magic knife that, two turns later, was stolen by yet another version of her. She later turned into a demon. 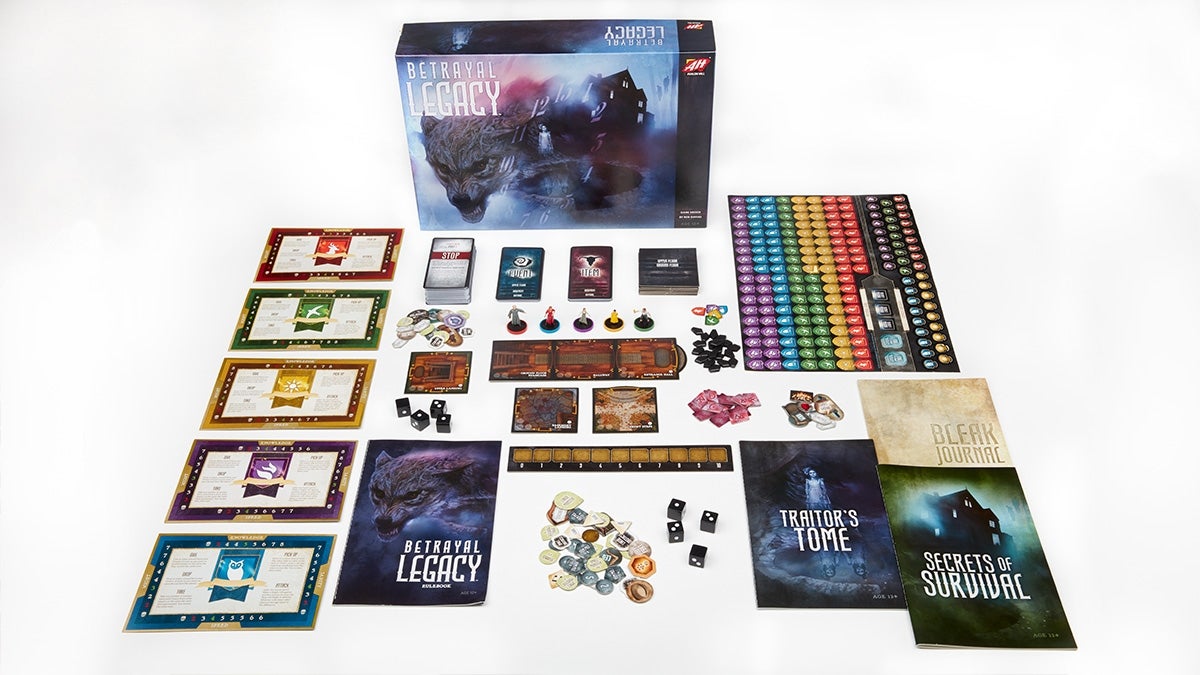 Betrayal Legacy maximizes on the game’s storytelling focus. Instead of ending in about an hour like a typical Betrayal game, Betrayal Legacy unfolds over thirteen chapters.

They’re each about 45 minutes and, most of the time, end in players’ bloody, early death. Each player is a family who is somehow tied to the haunted mansion and, each generation, one representative explores the house. Over time, the families’ histories and heirlooms become so enmeshed that it triggers elaborate battles and revenge plots, all with the interference of the supernatural.

When you die, your ancestor can become a ghost that haunts a certain zone, like the lake in front of the house.

What guides the game’s trajectory is something called the Legacy Deck, which ties together the sessions ranging from the 17th to 21st centuries. It’s hard to talk about what’s specifically in the deck without spoiling the game – and there are a lot of surprises to spoil – but suffice to say that it’s a winning mechanic. Descriptions of characters descending into madness, and sometimes other dimensions, push the narrative along as players reveal the cards at crucial moments in the game.

After my first two sessions, Betrayal Legacy feels like an unpredictable and unusual feat of storytelling. It’s easy to teach players who have never played the original, and exciting for old fans of the game.

At one point, our group (made up of two veterans and two newcomers) was asked to scratch off cards to determine which one of us was the traitor witch. Each move in which we did not attempt to find and kill the witch, we were driven further into paranoia and madness, which drove down our stats. One player instantly killed me, a non-witch, in an early, powerful blow. Oops.

I was not a huge fan of Risk Legacy, another campaign version of a classic board game, because it just felt like more Risk. Betrayal benefits from the Legacy format a little less superficially, and I can imagine that, after playing for several more sessions, I’ll have tome-length tales of backstabbing, suspense and ghostly revenge.