Command and Conquer: Rivals, out yesterday, takes the beloved real-time strategy series into the controversial world of free-to-play mobile games, which tend to be fuelled by loot boxes and microtransactions. This game is, too, and it goes to absolutely zero lengths to mask that. Worst of all, the game’s still fun despite those things, making it all the more bittersweet that it is inextricably hitched to some pay-to-win mechanics.

The series’ multi-decade trajectory from being some of the best PC games of the late ’90s to a pay-to-win phone game feels tragic, a sentiment that did not appear to be lost on the thousands of fans who downvoted the game’s E3 2018 announcement trailer on YouTube. But Rivals isn’t a terrible game. By the standards of modern mobile games, it’s actually quite good, on par with Clash Royale, the loot box-ridden competitive strategy game that likely inspired it.

Rivals, which is available on both iOS and Android, is not even a bad Command and Conquer game. Despite it seemingly being created first and foremost as a platform for making money off some mobile gamers’ penchant for grinding with their credit cards, there’s a sleek strategy game that’s been dragged along for the ride. I played several hours of Rivals yesterday—while eating lunch, cooking dinner, and watching cable news with my partner—and I have to confess, I want to play more. 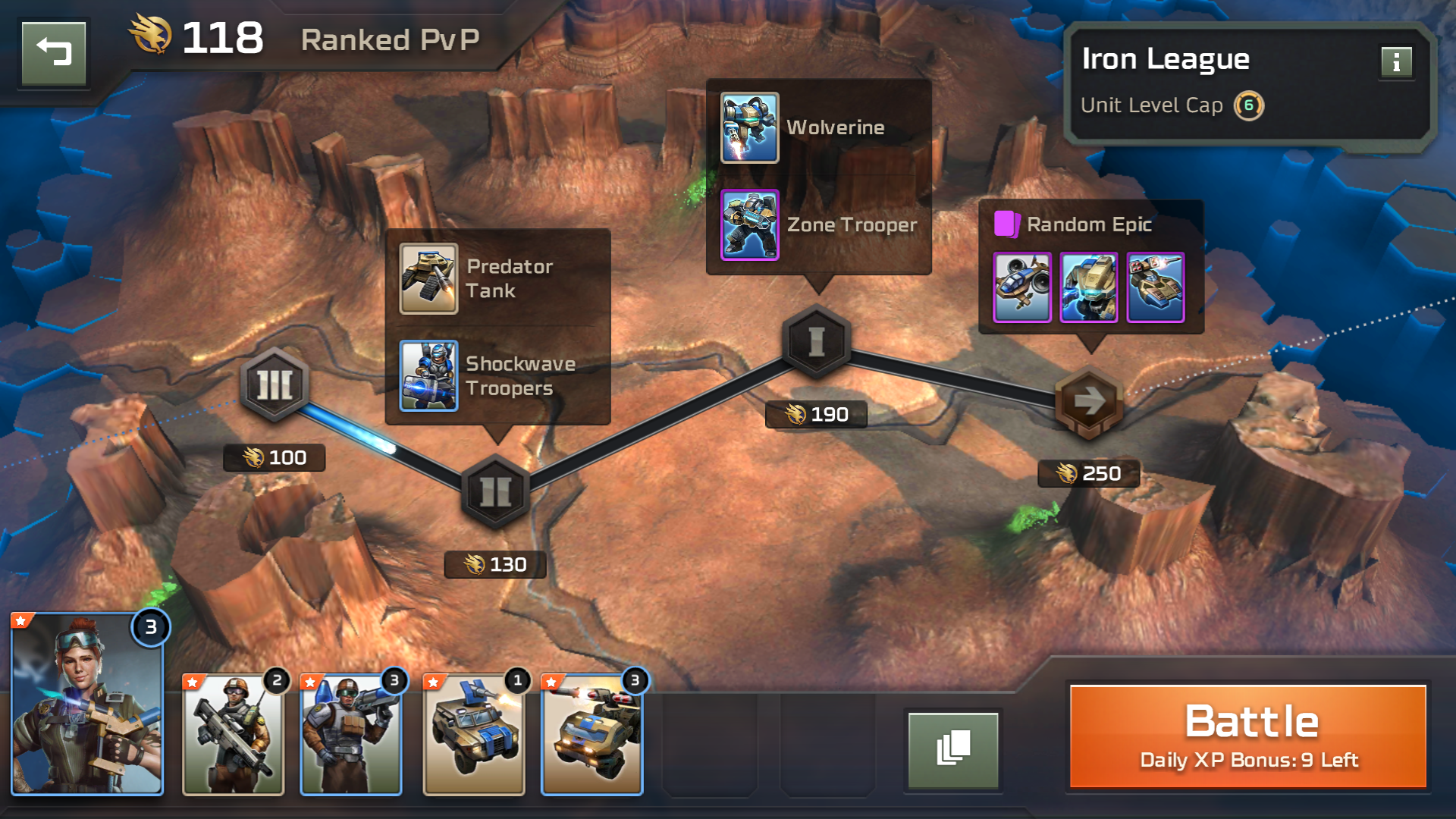 The object of the game is to destroy your opponent’s base. To do that you create a range of military units, each with specific strengths and weaknesses. The resource you need to build your own base is Tiberium, the mysterious sci-fi mineral fuelling global war in the Command and Conquer universe; Tiberium reserves slowly replenish over time. Your units can attack the opponent’s base directly, or other units, or they can take control of platforms in the center of the map to launch nuclear missiles. Each missile takes down half a base’s health, and most matches end after one player has successfully launched two.

Sounds simple, but fortunately, Rivals also has a few wrinkles that allow for more strategy than just trying to make the biggest, baddest army, throwing it at the opponent, and hoping for the best. The map is broken into a hexagonal grid, with most units only able to attack the hexes to which they’re adjacent. In addition, in keeping with real-time strategy game heritage, there’s a fog of war that hides what the enemy is up to. Some units provide extra visibility, while others have special detection for opposing stealth units. While the maps are small and you’re limited to only six units on the battlefield at a time, Rivals succeeds at taking the basic building blocks of the genre and scaling them down to smartphone proportions.

These fundamentals are strong, and they are the thing that keeps me coming back. I particularly like trying to bait opponents into a false sense of security, building up my forces and keeping my superior units out of sight, then trying to take control of the nuclear launch site right before a missile’s about to get fired. Progress toward a launch is cumulative, no matter who’s controlling it, and the only thing that decides which side gets hit is who has control of it at the very end. This dynamic is great for engineering drama in the closing seconds of a match, and it leaves open some room for experimenting with different strategies and rhythm of attack, rather than always going for the slow, drawn-out war of attrition. 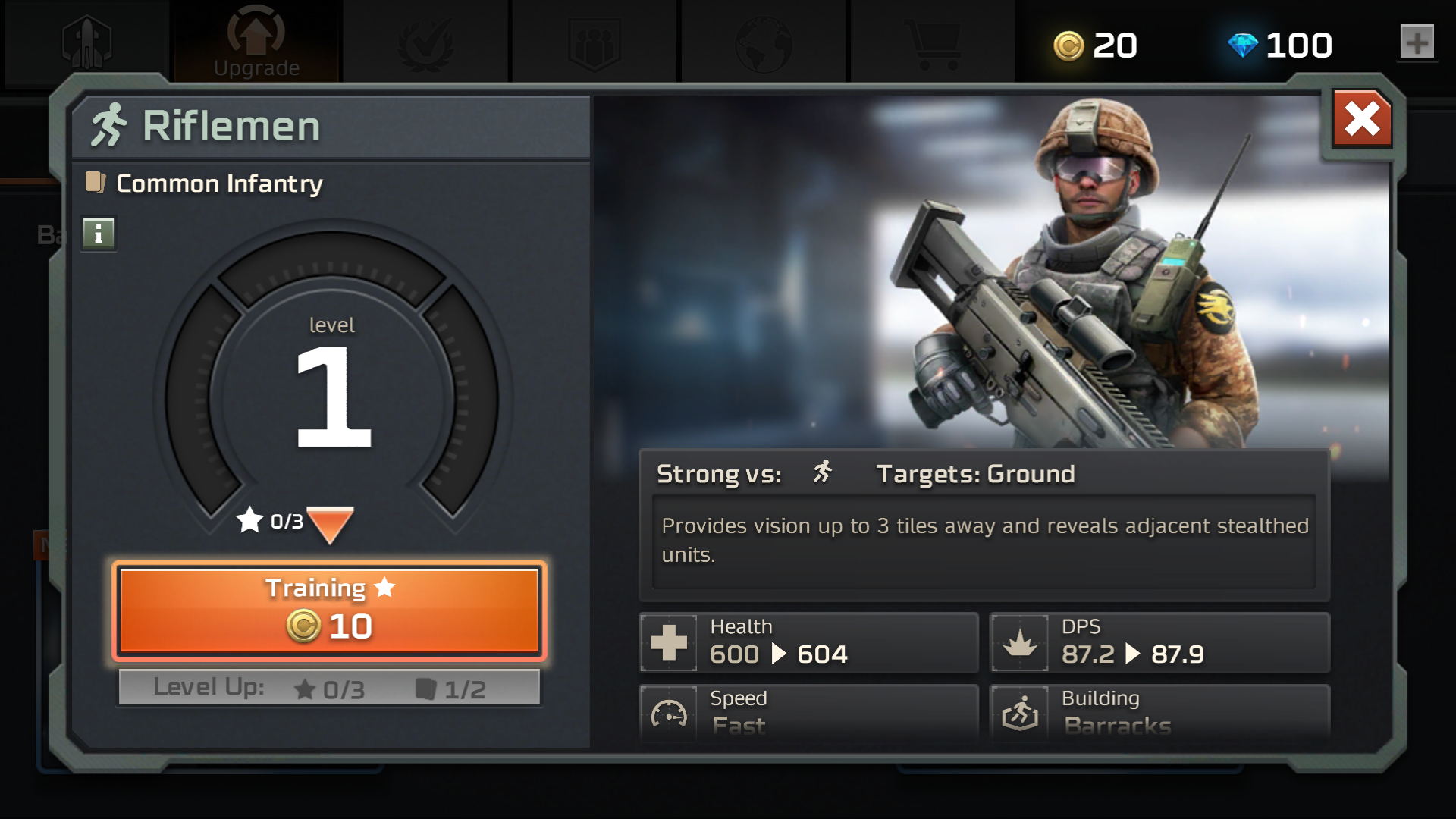 But then there are the microtransactions. During the game’s brief four-match tutorial, the game spends a not insignificant amount of time explaining how to level up your forces, which involves a progression system that at its core is based around buying loot boxes. Players’ arsenals are limited by what they’ve collected from these boxes, which can be earned through playing the game but will, at the higher levels, require spending some money to remain competitive.

In Rivals, loot boxes generate cards that represent different warrior types, like Riflemen, Pitbulls, and Wolverines. You can take up to six of these units into battle. You can spend credits, which you get from earning experience points and opening loot boxes, to level up your units, up to a point. Credits can be used to buy additional unit cards—a couple hundred for rare ones and a few thousand for legendaries. When you get duplicate cards, they can be used to further level up the units that have already been maxed out by credits. By winning matches, you get canisters of fuel that can be used to order new loot boxes. These take seven hours to arrive, although spending another fuel canister will cut the wait time down to three hours, at which point you can rush the loot box in for immediate delivery by spending diamonds. Diamonds can only be obtained by spending real money; at the lowest price, they are 200 for $3. You can also use them to buy credits, which are 3,000 per 200 diamonds.

As an example, I have level four Shockwave Troopers. Their health is 1,666 and their damage-per-second is 227.6. For 360 credits, I could train them up to three stars and increase both stats by several points. To boost their strength even more, I could spend 600 credits in the game’s store to buy additional Shockwave Trooper cards and use those duplicate cards to level mine up to five. It’s the same progression system as Clash Royale, and there’s something soul-destroying about it, since I always know that while I could grind for hours to marginally increase the power of my army, I could also just spend a few bucks and get just as far. Unlike a card game where all versions of a card are equal and the grind stops at collecting them, in Rivals, and games like it, the grind is eternal. 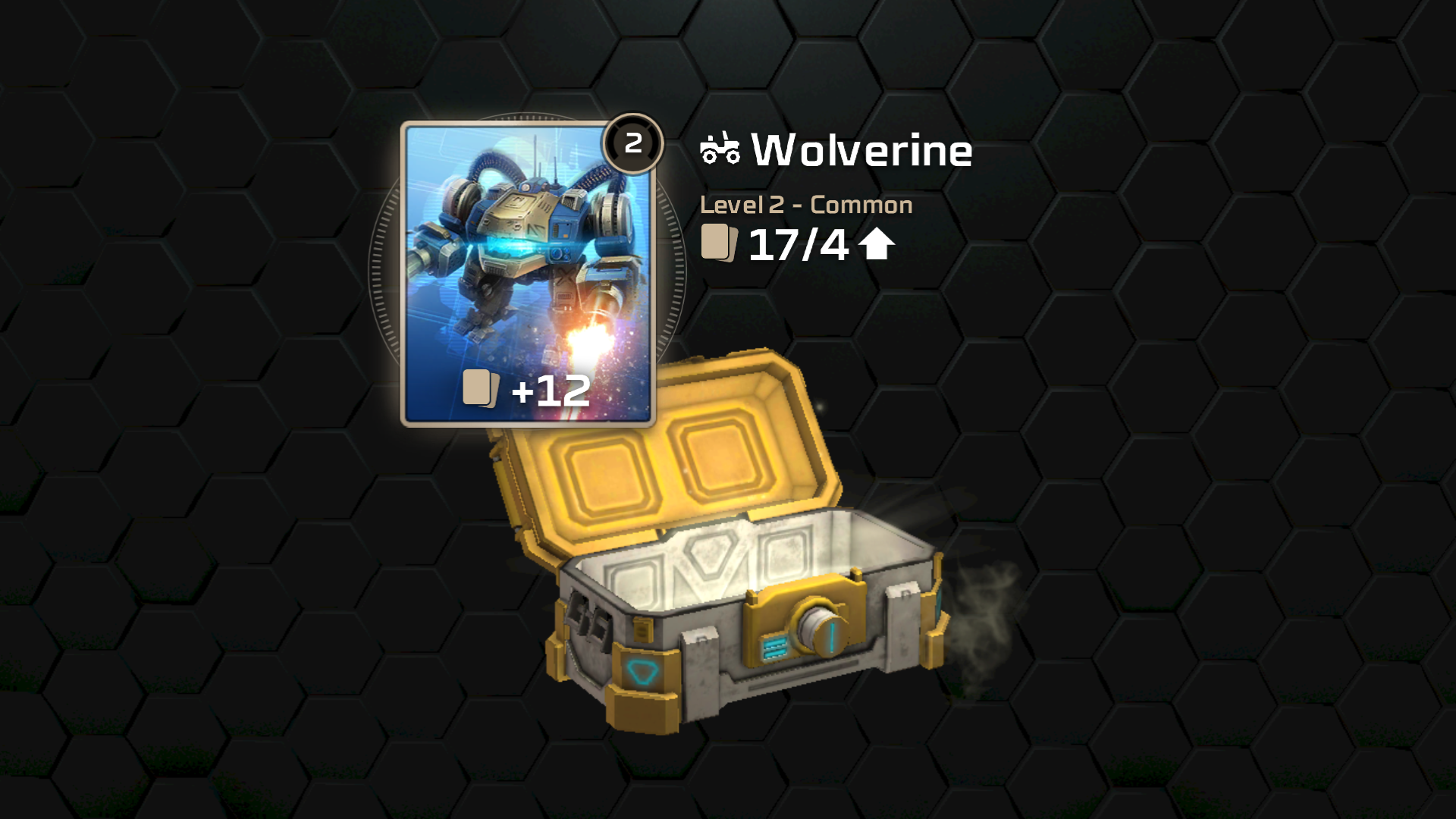 While I haven’t spent any money on the game, I have seen the effects of war between two asymmetric armies play out in real time. My Rifleman units, the most basic and resource-sparing unit on the battlefield, are currently level four. I’ve watched them waltz onto the nuclear launch pads at the beginning of a match and be faced by opposing Rifleman units, but who are at level two or three, and I’ve watched those Rifleman units quickly die as mine prevail, providing me with an important edge in taking early control of the nuke sites and forcing my opponent into a reactive stance. The game even tells you the level of each unit, letting you know where to invest your resources if you find yourself on the losing end of one of these struggles. I saw fans posting online that they were afraid Command and Conquer’s first phone game would do this, and they were right. This aspect is an inescapable part of Rivals.

Rivals has the potential to be not only a fun mobile game but also a fine strategy game in its own right, if only the loot box progression system were stripped away. I could even imagine it having a narrative-driven single-player campaign, since the game’s ranking system is laid out like a map with milestones for certain numbers of wins as you climb the game’s competitive ladder. As fun and polished as the game feels, though, I’m just not up to dealing with another game that’s constantly itching to get into my wallet, with push notifications to my phone telling me I have unused resources and pop-up messages when I log on asking me to spend $10 on the game’s starter loot box set.

Fortunately, Rivals isn’t the only development in the land of Command and Conquer. Last month, EA announced that it would be working with some of the original game’s creators, now employed at a studio called Petroglyph, to remaster the first game as well as Command and Conquer: Red Alert. For anyone looking for a match of tactical warfare while waiting for the bus or their pasta to boil, Rivals is worth checking out, but for fans of the story and deeper real-time strategy of the original series without the tinge of loot box schemes, they’re better off waiting for the remasters.