11 Years On, Mirror’s Edge Is Still A Masterpiece

I don’t tend to replay video games very often. The demands of this job mean I’m normally straight onto the next one as soon as the credits roll on the last. But every year I try to find the time to revisit one of my all-time favourites: EA’s Mirror’s Edge.

It’s not a perfect game, I know. When it first released in 2008 I remember that, despite its mostly positive reviews, Mirror’s Edge had its fair share of significant criticisms as well, many of them entirely valid. It was short (you can tell it was 2008 because that really mattered), and there were too many moments where you’d encounter repeated and frustrating deaths that would sap the game of its speedy lifeblood. Oh, and the combat sucked.

Time has been kind to Mirror’s Edge and its best intentions, though, and the last thing it needs now is my help defending it. It even (belatedly, and regrettably) got a sequel.

But as good as it was, I think the most remarkable thing about Mirror’s Edge is that it’s still good, and just keeps getting better with age. 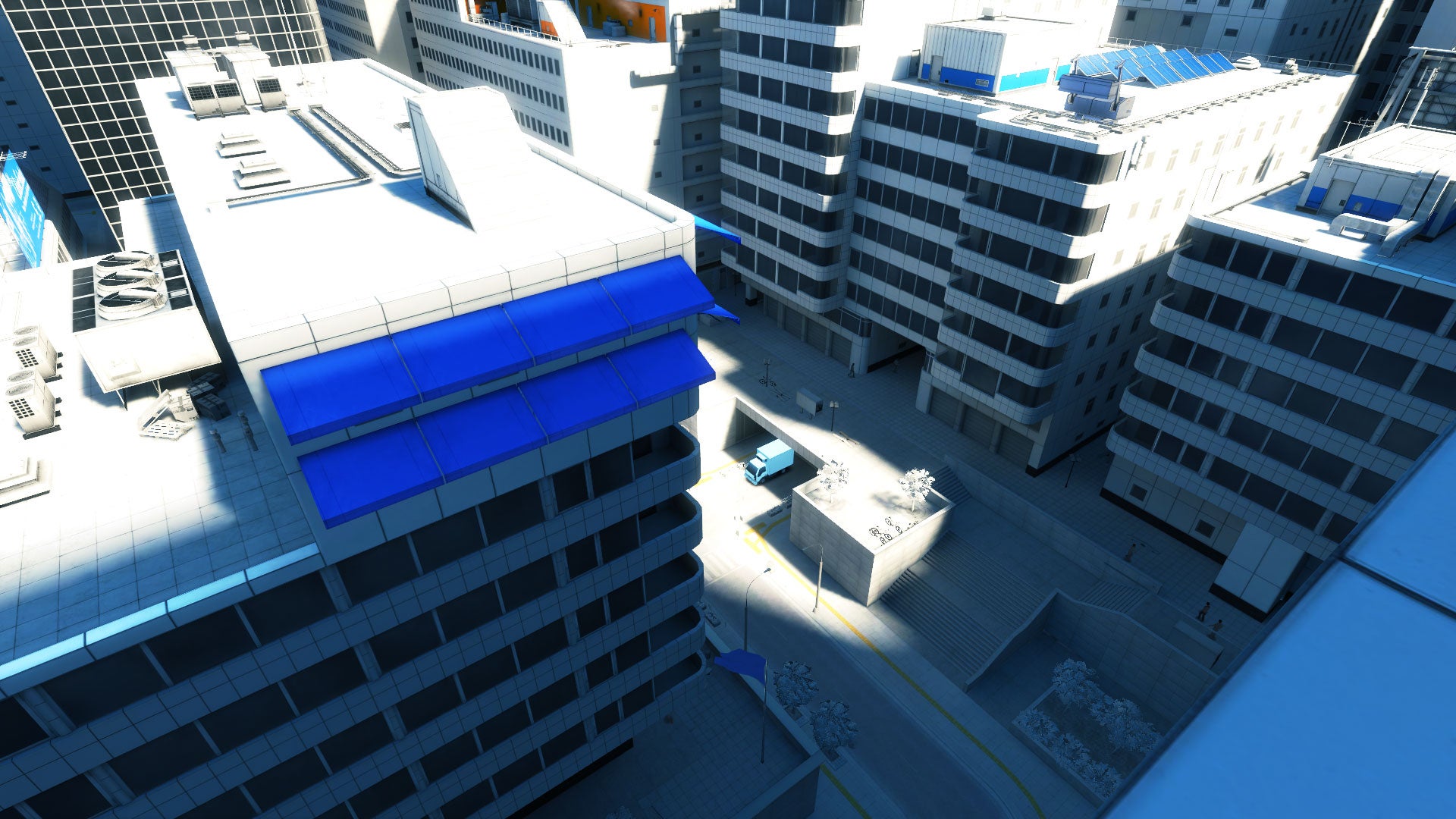 Partly, I think, this is on me. I’ve played Mirror’s Edge so many times that even with year-long breaks in between runs I can instantly recall routes and navigate its twisting corridors without getting lost, which isolates me from many of the game’s bigger problems. You don’t need to worry about combat, for example, if you know the best path to just sprint past the bad guys.

Another contributor is the game’s visuals. There’s nothing terribly fancy going on in Mirror’s Edge, at least not at first glance: there aren’t many weather effects, not much goes BOOM and there’s rarely another human being on the screen. All you ever really see while you’re running is crisp, clean architecture and a colour palette designed as much to aid the player on their runs as it was to just look cool.

It could have looked boring, or basic. Instead those white walls, red pipes and blue skies have, over the last decade, become iconic visual signatures, instantly recognisable as this game’s thing. It doesn’t matter that Mirror’s Edge was released in 2008, because those clean lines and bold colours look as modern in 2019 as they did back then.

Not that I want to undersell the rest of the game’s graphics. It’s all aged gracefully; Mirror’s Edge’s player models and facial animations look surprisingly good for a game of its age, and I remember how amazing it was at the time — with an Nvidia card, anyway — to see things like flags flapping in the wind and glass that genuinely shattered (both of which still look great in 2019). 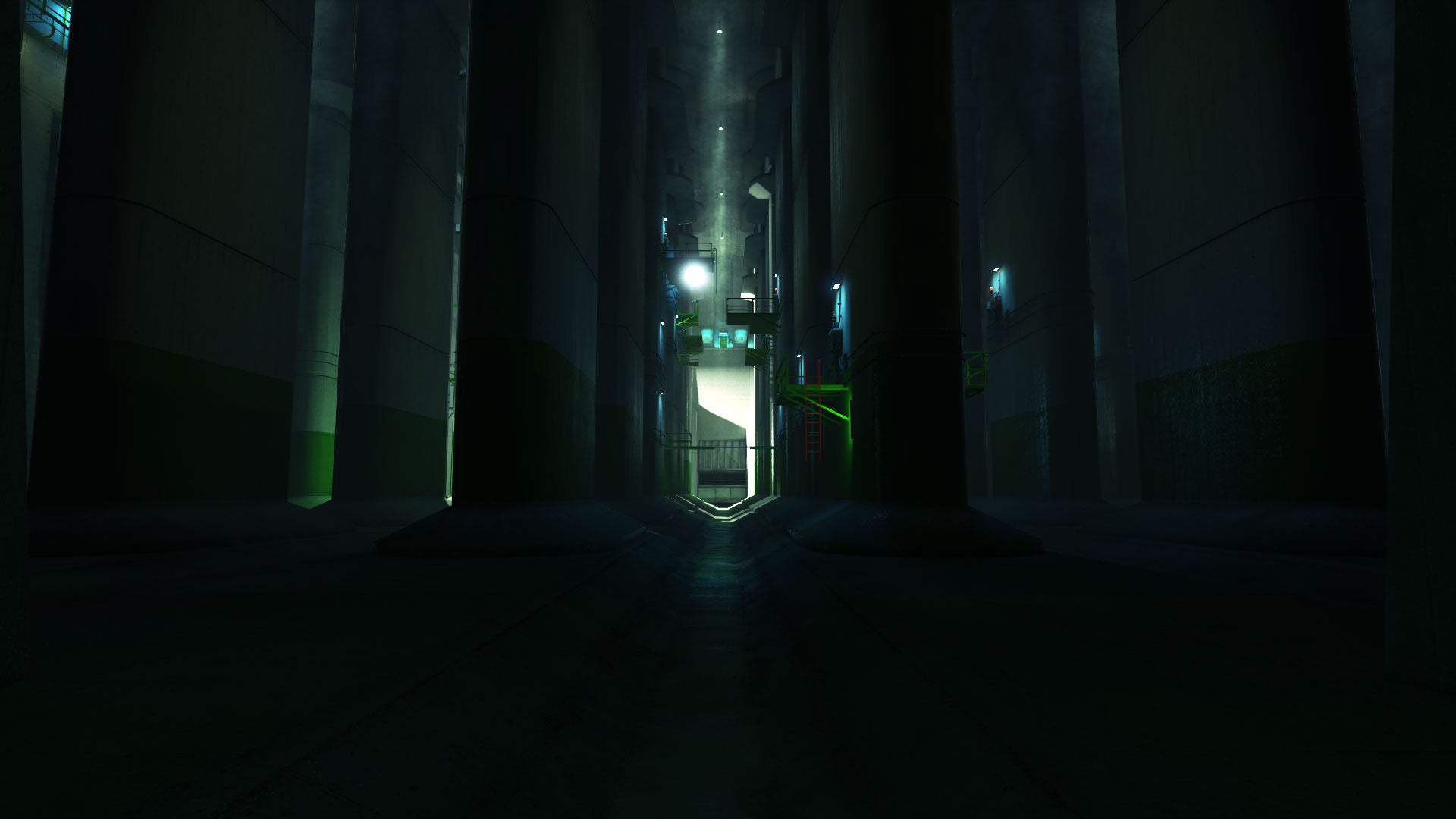 It’s impossible to look back on Mirror’s Edge and not at least mention its failings. I’m slightly biased, since I’ve now played through the game hundreds of times and so am almost immune to its deficiencies, but the more I play the game the more the purity of its core vision pushes all of its frustrations to the margins.

Yeah, the combat wasn’t great, and the indoor sections were a pain, but I think those are issues not because they’re issues in of themselves, or were broken, but because they’re seen as padding, roadblocks keeping you from enjoying the one thing the game was made to do: breakneck parkour.

Folks hated anything that wasn’t parkour because parkour is what we were here for. Mirror’s Edge is about the thrill of the chase, and the joy of performing superhuman — but also very human — acrobatics across rooftops. It’s so good that every moment spent in the game not doing this is agony.

It’s ironic that the game’s narrative portrays you as a hunted rebel, because while there are certainly moments of terror and pursuit, much of Mirror’s Edge is actually incredibly liberating. The entire game is built around the conceit that you’re playing as a regular human capable of extraordinary feats, and you’ll spend most of your time in levels designed to let you express yourself and make the most of those skills.

To take a running jump off a ramp, the world blurring around the edges of the screen as you leap between buildings, a bright blue sky flashing in front of you before returning softly to earth, is magic. It’s a singular gaming moment that’s almost without peer, right up there with snapping up an iron sight in Call of Duty, a Tony Hawk grind or a Halo melee attack.

And it wouldn’t mean shit without the game’s absolute commitment to the first-person perspective, which I admire more with each passing year. The simple and predictable AAA Electronic Arts thing to do for a game that’s a platformer at heart would have been to reduce it to a third-person perspective, in order to make it easier for players to time and place their jumps.

DICE were having none of that. Mirror’s Edge is so first-person that there are cutscene hugs that play out in the perspective, which might be hilarious in those rare instances where it jars, but for 99% of the game are absolutely essential to the experience.

Being locked into first-person and all its accompanying momentum and effects means that basic jumps and rolls that would be mundane in another series are transformed into gut-churning, white-knuckle rides. A leap in Mario is a constant, as unremarkable as drawing breath. A jump in Mirror’s Edge, no matter how small, is thrilling.

As is the fall when you mess it up.

I couldn’t round out a love-in of Mirror’s Edge without mentioning the work of Swedish musician Magnus Birgersson, aka Solar Fields. His soundtrack to the game, comprised mostly of gentle, other-wordly electronica, is the perfect match for the city’s Tokyo-future-inspired aesthetic, whether it’s the more chilled backing for some exploration or the pulsing rhythm of a chase. And much like the game’s visuals, the music has aged remarkably well.

I love Mirror’s Edge because it’s stubborn. It’s as though EA signed a tiny indie game rather than a massive international studio. Nothing feels watered down, or focus tested, or softened for a broader audience. It’s a game that wanted to look and play a certain way, and was content enduring its shortcomings in order to achieve that.

So much of the Mirror’s Edge experience is wholly owned by the game: the architecture, the colours, the characters, the perspective, the acrobatics, the music. Everything about Mirror’s Edge just screams Mirror’s Edge, most of it as timeless as it is beautiful. It’s been 11 years since I first fell in love with the game, and I bet I’ll be sitting down in 11 years time feeling much the same as I do now.