It’s Much More Fun To Play Phantasy Star On Switch

phantasy starsegasega ages
To sign up for our daily newsletter covering the latest news, features and reviews, head HERE. For a running feed of all our stories, follow us on Twitter HERE. Or you can bookmark the Kotaku Australia homepage to visit whenever you need a news fix.

Over my holiday vacation, I played all the way through Phantasy Star, Sega’s classic 1987 Master System role-playing game. I did this by way of playing the new Sega Ages release of the game for Switch — and now that I’m finished, I realise that I’d never have played it any other way.

RPGs for 8-bit game consoles, as a group, have a reputation for being brutal. They are parsimonious with their hints, tending to not tell you where to go, or what to do when you get there. The random encounters tend to be frequent and punishing, requiring you to spend many hours grinding away just to have a chance at survival.

Dungeons tend to be massive and labyrinthine in structure. Sometimes you can even paint yourself into a corner, saving your game in a place where it’s impossible to proceed any further and having to start from scratch (or just give up).

As beloved as it is, Phantasy Star commits all of these transgressions. That sort of design was acceptable, even appreciated in 1987 Japan, but just a few years later it was difficult to get into games like this. I’ve never gotten further than a few hours into any of the NES Final Fantasy games, for example.

But I have played the numerous remakes, on the Game Boy Advance for example, which made the games much more welcoming to the player by reducing the difficulty and adding in various quality-of-life features that make the experience less of a battle between player and program. (I even played through the notoriously player-antagonistic Final Fantasy II this way, a couple years back, thanks to the Game Boy version’s generous tweaking.) 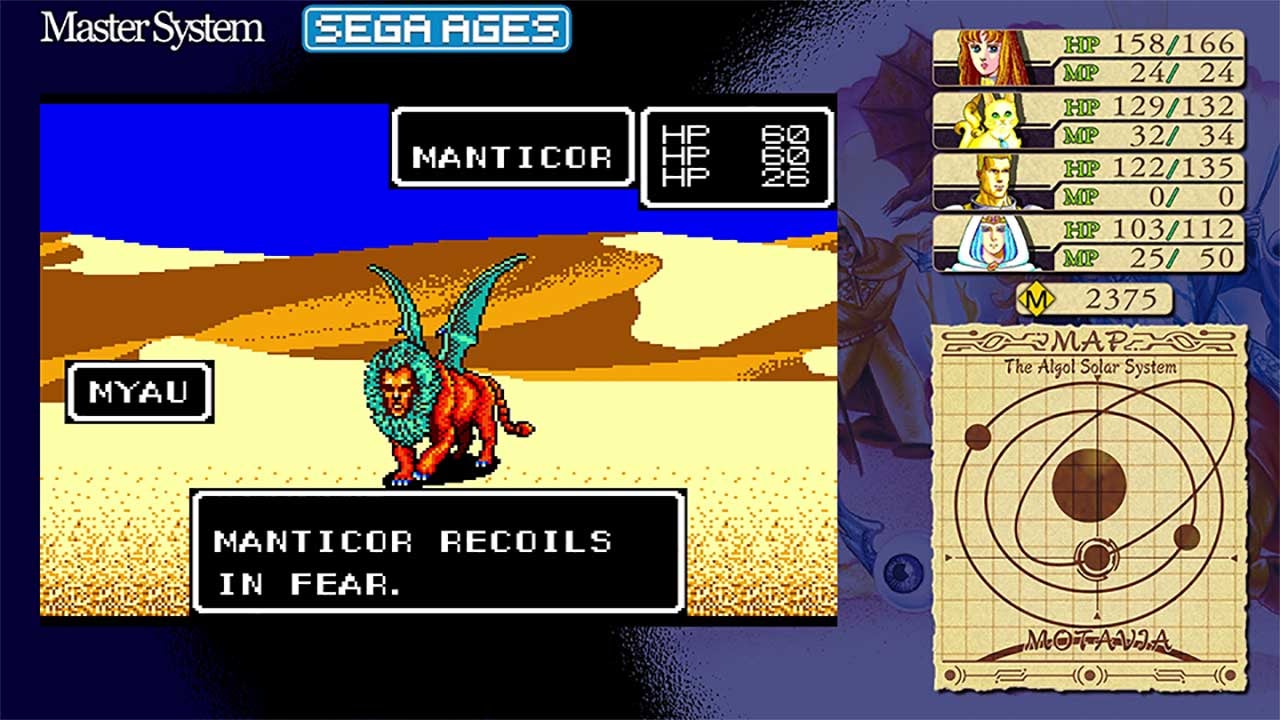 The Sega Ages version of Phantasy Star is quite unlike other re-released games. It’s not a remake, like the Final Fantasy ones with their upgraded graphics, music, and interfaces. It is the original Master System version running under emulation, and if you want the original, brutal experience, you can have it. You can change around how the game displays, altering the screen size, pixel smoothing, etc. But you can also choose to tweak the gameplay in a variety of ways.

You can play the game in “Ages Mode,” which changes nothing about the game except for, in almost Game Genie-like fashion, making enemy encounters less frequent and bumping up the experience points and money that you receive for each. Now you can get powered up without grinding, and you won’t be interrupted so much when you explore.

There’s also a new menu that you can bring up with descriptions of all the game’s items, equipment, and magic spells, which are not described in the game and have severely truncated names. No more wondering what the hell a FRD. MANT is supposed to be.

Most importantly, Phantasy Star’s dungeons now have an auto-mapping feature. This is one of those RPGs with pseudo-3D, first-person dungeon crawling, and the dungeons are sufficiently complex that you would have to literally get out sheets of graph paper and map out the layouts as you played if you wanted to have a snowball’s chance in hell of finding your way through.

In the Switch version, a map on the right side of the screen is automatically filled in as you travel through the mazes, making them quite easy to navigate. 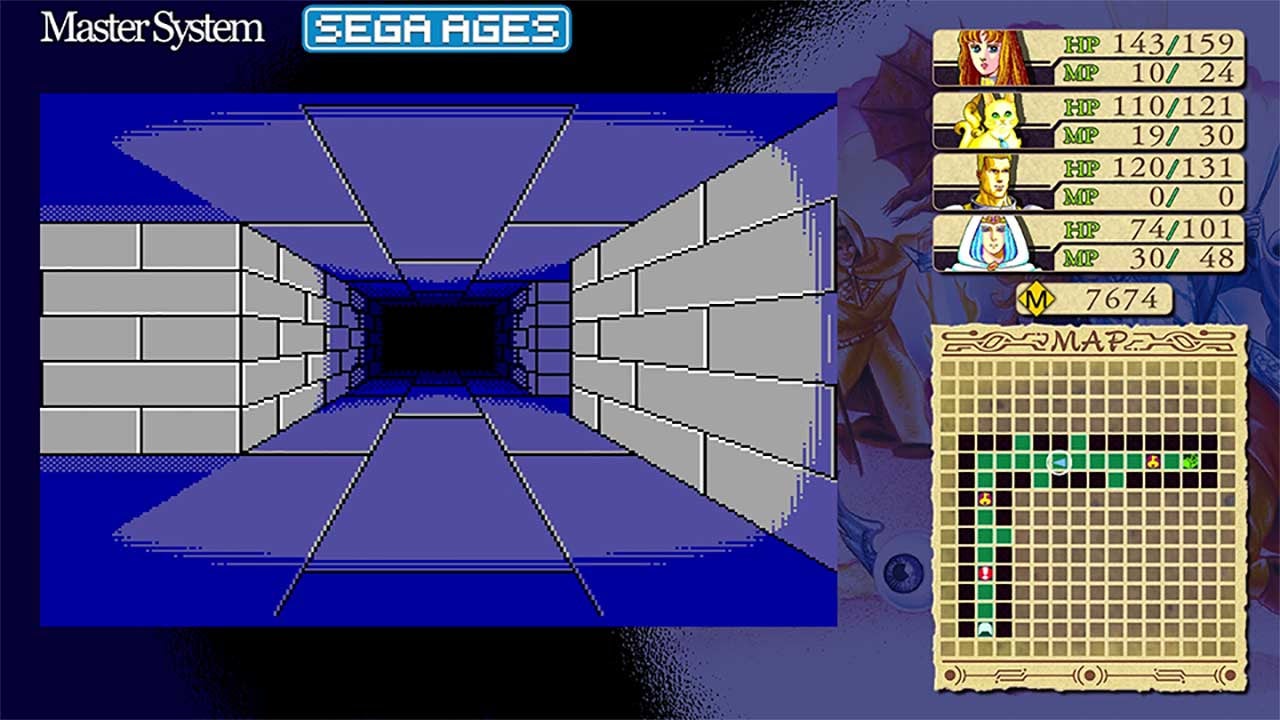 Even with these adjustments, Phantasy Star is still an obtuse journey. Just to name one example, the penultimate boss will always one-hit kill your party at the start of the battle unless you find a certain item beforehand. Oh, and you can actually drop that item out of your inventory permanently, making it impossible to clear the game. Also, if you finish that fight with one certain character dead and another out of magic points, you can’t progress any further in the game, and have to reset and do the fight over. Unless you overwrote your old save after that fight, in which case you are royally fucked and have to start again from the beginning. Fun!

Thanks to all of those tweaks, I really enjoyed playing through Phantasy Star. I always wanted to love this game. The setting, an eclectic mix of fantasy and sci-fi tropes, is captivating all the way through. The music is fantastic, and the Sega Ages version lets you use the superior Japanese soundtrack even if you’re playing the English version of the game.

The story … OK, the story still sucks, but the character designs are beautiful. And the battles! In sharp contrast to Final Fantasy’s tiny, static enemy graphics, Phantasy Star’s are gigantic screen-filling beasts with many frames of detailed animation.

It’s a pretty basic 8-bit RPG—very little plot, battles that are by and large just about mashing A, and little to break up the town-dungeon-town-dungeon structure. But the enhancements and tweaks make it a light, breezy experience, a sort of relaxing tour of gaming’s past. 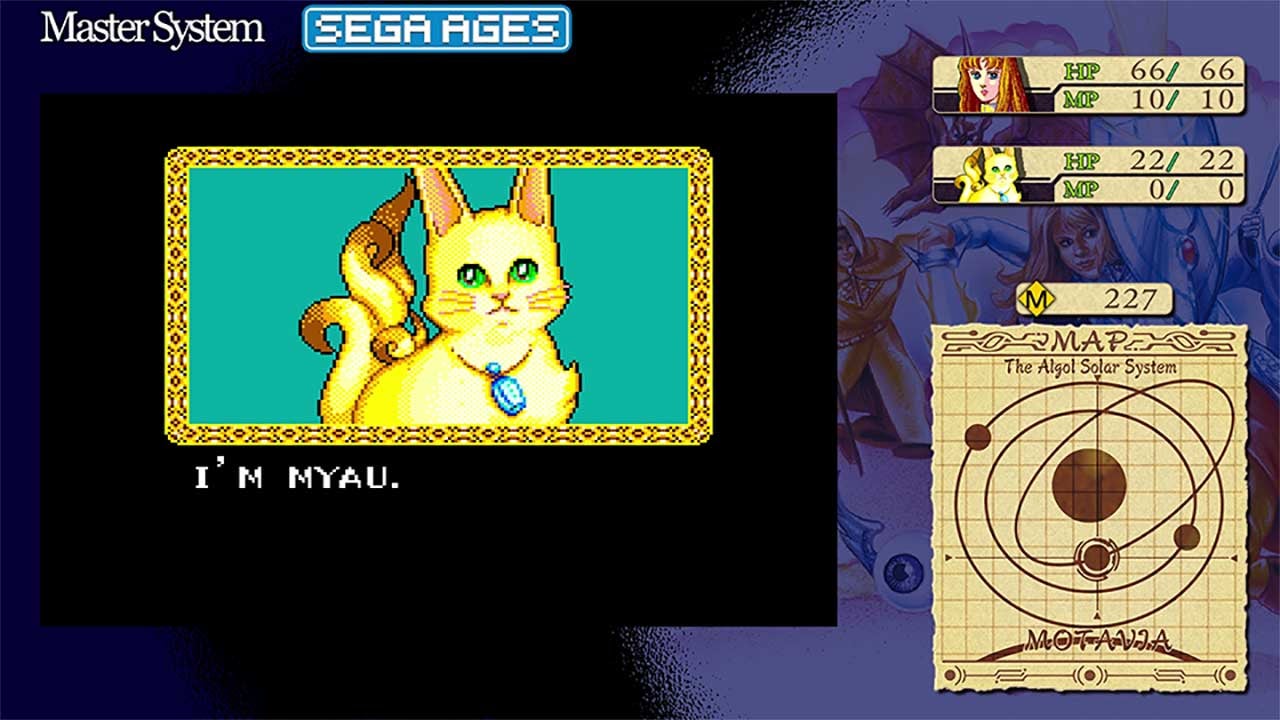 What I liked most about Sega Ages’ unique approach to Phantasy Star is how I got to experience the “original” version of the game. There’s no similar way to play through 1987’s Final Fantasy with unretouched graphics, music, and menus, but also with quality-of-life upgrades. Phantasy Star does a little bit of tweaking under the hood, but most of its augmentations are via overlays. I really like this concept of having the original game running in a window, with extra stuff wrapped around it.

Of course, this sort of special treatment wouldn’t be feasible for every game. That’s why I’m pleased to see that Sega is choosing the “why not both?” path for Switch – you can buy the 50-game Genesis collection with mostly untweaked games for $59.95, or buy the upgraded, augmented Sega Ages releases individually. (Other Sega Ages games currently available include Sonic the Hedgehog, Lightening Force, and OutRun.)

If I wanted to jump into playing the rest of the Phantasy Star series on Switch, I could do that right now via the Genesis collection … but I think I’d rather wait to see if there are Sega Ages versions of these in the works.