What Makes A Horror Game Scary

I’m not one to play that many horror or scary video games.

I tend to avoid things that will stress me out or stick with me when I’m trying to sleep – like movies about that one clown who likes red balloons a little too much. But that’s not to say I haven’t enjoyed games that can fall into the horror genre before – just those on the other end of the ‘scary’ scale.

For me, what sets apart a ‘horror’ game from a truly ‘scary’ game comes down to one aspect: The strength of the player character.

In games like Left 4 Dead 2 and Dead Rising 2 combat is encouraged and enemies are relatively easy. Weapons are sprawled about the levels waiting to be used. I’m never really scared in these games. I’m more often amused by the games and will even experiment with different loadouts for fun. Both games are set amid an overwhelming zombie invasion but at no point are you ever really powerless. In L4D2 a teammate can always get you up off the ground if you go down (and even if they fail to do that, you can count on being revived at a later safe room). In Dead Rising 2 save points are plentiful and health can be found all over. There is no real danger in these games. Anything that happens is only a small setback.

It’s only when the gameplay starts to have real consequences (and a higher level of difficulty) that I begin to feel unsettled.

This was the case in Capcom’s recent remake of Resident Evil 2, the latest of the scary games I was forced to play for my work.

In the past, games like the Resident Evil and Dead Space series were far too terrifying for me to even consider playing. However, nowadays, I’ve made some progress. With enough persistence, I am able to finally complete them, though breaks for my sanity are generally necessary. The short version of why is that I have come to understand just what it is that scares me about them. 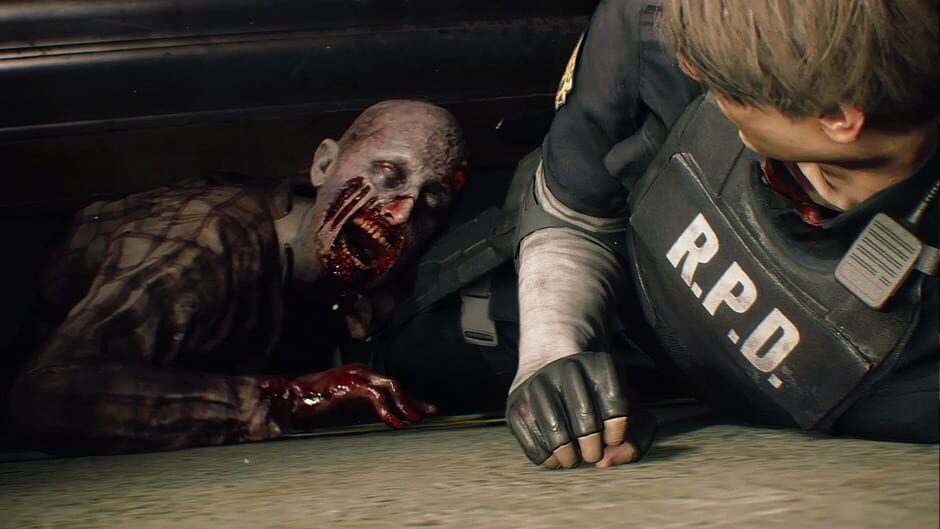 Nevertheless, I came across sections of the game that I actually needed to walk away from the game due to fear. The powerlessness I felt in those moments was far more terrifying than any gore-filled scene or disfigured monster I could come across.

Thanks to the scripted elements of the game, effective sound direction and the adoption of an over the shoulder in the remaster, Resident Evil 2 has really gotten a lot scarier a second time around. The third person perspective and tight corridors means you can never really know what’s coming around the next corner.

The audio design in the game has been made to replicate the sensation of a stereo sound – and it almost feels like your ears are hearing the sounds in the same way that Leon and Claire are. An added bonus to the PS4 edition are the sound effects that emanate from the hand held controller when a puzzle is solved or a door unlocked, adding a satisfying feeling to each milestone. Along with the almost movie like CGI graphics, thanks to the RE Engine from Resident Evil 7, the game has a completely different feel to the original.

From here on I’ll be talking about specific aspects of and things in the game, so be warned that there are spoilers ahead.

The ‘thing’ in question I am referring to is of course the Tyrant (also known as Mr. X) a hulking figure in a black trench coat and (cute) hat that is virtually unkillable and constantly on the hunt for you. Throughout the game the Tyrant is constantly attempting to hunt you down and kill you. And unlike other enemies, he’ll follow you from one room to another as you move across the police station the game is mostly set in.

If he manages to catch up to you, he’ll take a chunk out of your health by delivering you a ruthless beating – forcing you to use up some of your very limited healing items. Mr. X can only be stunned temporarily, and doing so costs you resources in the form of ammunition – which is already sparse, so it feels like using them will come back to haunt you.

Having this unkillable foe relentlessly pursue me through the Raccoon City police station and subsequent levels was horrifying. Before he was introduced, I was making quick progress through the game. I was solving puzzles with ease, clearing areas with precision headshots and taking my time to find the clues needed to acquire bonus equipment in the game’s various safes and lockers.

That all changed when he literally came crashing through one of the station’s walls. From then on, I was frantic in my efforts to unlock the next zone. I found myself rushing through areas and missing potentially-vital clues in order to escape this horror that pursued me without pause.

The old systems in from the original Resident Evil that helped you were popular with dealing with him are now gone thanks to the game having no loading screens between rooms or areas anymore. Mr. X moves smoothly through the level, with no barriers to hold him back anymore. The only hope you have is to try and duke him around a table and make a break for the door – and which on more than most occasions that approach ended with either Leon or Claire getting a face-full of floor for the effort.

It was honestly very stressful.

In my time playing games, I have grown to be accustomed to many things including jump scares and copious amounts of blood. But the moment he jumped down from the second floor in front of me in the library, well, I almost shat myself right then and there.

I should add that I had almost no sound on due to both myself and my partner playing the game in the same room on separate devices as we had found the conflicting noises rather confusing.

I only found out later that he actually makes some kind of sound to alert you to his presence. That would have been a great help and probably saved me a few heart attacks. Sometimes I’d turn around to find him less than a metre away or on the other side of a door I had just opened.

Even still, it was the idea that really got to me I think. That something with its own purpose and agency in the world was hunting me down. Unlike the wandering zombies and lickers that act entirely on instinct – Mr. X was actively searching for me and only me. Each time I came across the unkillable foe I was filled with dread and helplessness.

I suppose this is where the line between games and reality really start to cross, where an unkillable enemy leaves your character as helpless in the situation as you the player would be. I found myself thinking about how I would be unable to do the things required of me to keep going in the story were I there myself, unlike our heroes Claire and Leon. Faced with impossible odds, like Mr. X, I would be unable to cope and that thought is still sitting with me well after finishing the game. That is what ultimately scares me – my own human limitations in a terrifying world I cannot control, not unlike our own.

I won’t spoil anything else from the game but if you want to get our full take on the Resident Evil 2 remake head on over to our review, or leave a comment below about what scares you in a game.

There’s a lot to love about the new Resident Evil 2, from its brash bloodiness to the wide variety of experiences packed into the game. Looking over the wreckage of my playthroughs, my own feelings are complicated. It is an exciting and astounding experience, but it feels compromised. </p><p>Pushes towards modernisation through changes to the camera and controls lessen the sense of dread in the original, and the presentation suffers without returning actors to tie it into the larger franchise. It has many good parts, but it struggles to cohere into a satisfying whole.