It’s been a while since I’ve played something as refreshingly uncomplicated as Crackdown 3. You’re a big dude (or lady) with genetically-engineered superpowers and a whole lot of guns. Out there is a futuristic city stuffed with militia and hostile robots. And after the briefest preamble, you’re free to absolutely go to town on it.

Before long, your outsized arsenal and superhuman powers make dominating the city almost comically easy. Then again, I’m not sure I really wanted much of a challenge from Crackdown 3.

This is total superhero wish-fulfilment, a game that requires absolutely zero thought. It flies by in a blur of explosions, shootouts and flying cars, concealing its many imperfections in a neverending whirlwind of action. It is what it is. Expect nothing more from it and you’ll have a fun time.

Your playground is a bright and cartoonish science-fiction city with all the blaring advertisements, tangles of futuristic highway, and ominous skyscrapers you could ask for. Each district is distinct, from the shiny tower-block central island to the sprawling slums, from the chemical-processing quarries to the seaside restaurants.

I was consistently surprised by the detail in this city. Its LED-and-neon visual style might not be particularly groundbreaking, but there’s a lot of it to explore, with collectibles thoughtfully placed not just on the rooftops but down amongst the side-streets and under bridges, where you’ll find a little sub-society of less-privileged residents.

From a distance, it’s a model city, but up close the sheen is dulled, and you can see how many of its citizens really live. (Admittedly, those citizens mostly sit or stand around like puppets, only ever moving when they are leaping for their lives out of the way of your car. But one can project.)

The architect of this strictly-controlled utopia is TerraNova, your standard-issue sinister megacorp run by supervillains and megalomaniacs. After a mysterious catastrophic attack blew up most of the world’s cities, TerraNova rescued the refugees and took them all to its shiny skyscraper-island to begin a new life in corporate paradise. But it is also exploiting them! And also possibly doing sinister chemical experiments on them by putting sinister green glowing stuff in the moonshine supply!

Oh, look, it really doesn’t matter. Honestly, I felt like I was causing more harm to the citizens of TerraNova with my haphazard driving and blitz-style armed assaults on public resources like metro stations and manufacturing plants. But let’s not overthink it. This is a game in which someone says the words “quack quack, motherfucker!” before being gruesomely burned to death. 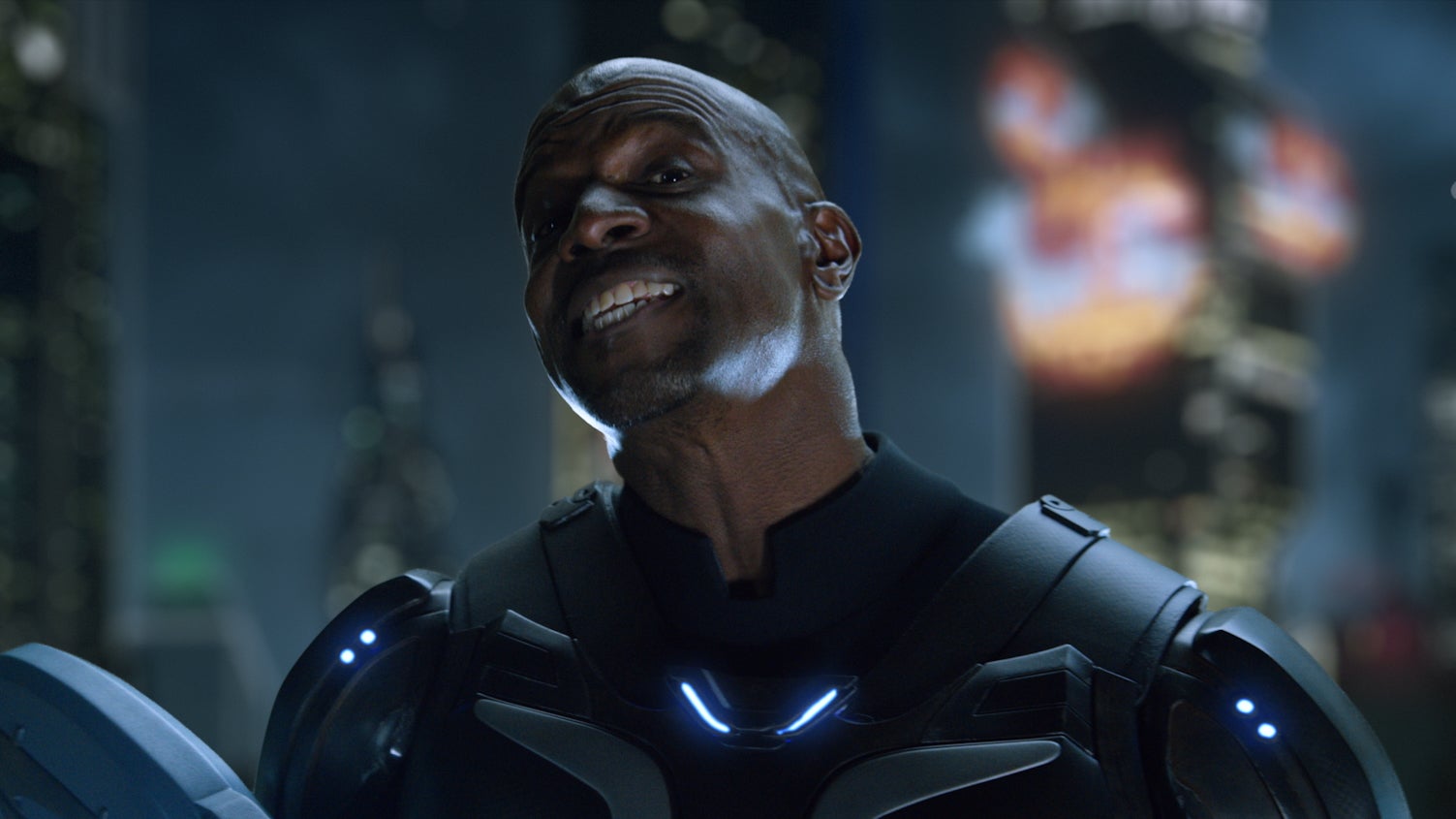 That someone is played by Terry Crews (Brooklyn Nine-Nine), who puts in an enthusiastic performance as the lead agent even though his role is mostly limited to the opening and closing scenes. You can play through the entire game as his Commander Jaxon, though, or as one of 21 other agents.

You start with a few, and you can reconstitute more from DNA that can be found around the city, including a Glaswegian ex-cop and an ace driver. It is great to have a diverse set of options for what your superhero fantasy looks like, but the differences between them are minimal when you’re playing: Each has a slight EXP boost to explosives or driving or whatever, and maybe two or three unique lines. I would have liked a little more quippy dialogue to differentiate them further.

Crackdown 3 is about conquering the city from the outside in. The more you poke your finger into the eye of the corporate megapower, the more firepower gets sent your way. By provoking the corp’s lieutenants by targeting their factories or vehicle lockups or training grounds, you eventually draw them out into a big confrontation, working your way up to the nefarious CEO. These boss battles are cliched supervillain face-offs, often involving you slowly scaling a very tall building to find your adversary at the top. More than one of them involved a giant robot.

Your character has five stats (agility, firearms, strength, explosives, and driving), and you level them up by using them. Collect the familiar green “agility orbs” from the tops of buildings or run footraces and you’ll build up your agility, jumping higher and farther. Use guns and you’ll get better at guns. Punch people and you’ll build your physical strength. No matter what you choose to do, you’ll grow quickly more powerful.

Like many open-world games, Crackdown’s balancing is a bit weird. For a few hours at the beginning, everything is a little bit difficult, then there’s a short-lived sweet spot, then everything becomes too easy. Every target in the city represents a different flavour of challenge—in vehicle lockups you have to climb around searching for a generator that powers a forcefield before you can head in and blow things up, chemical plants have you either destroying valves or chucking giant rocks into threshers to sabotage machinery, and propaganda towers are platforming puzzles. Take these on when your powers are just about up to the task, and they can be tense little bursts of varied action. Any later, and they’re over very quickly. Towards the end of my time with Crackdown, killing time before the final boss, I was mopping up these wee challenges so easily that they felt almost pointless.

Towards the end, I could take down a processing plant or liberate a metro station in less than two minutes. The only thing I didn’t almost max out was my driving skill. When you can basically fly between buildings, there’s not much incentive to get into a car.

You should know that Crackdown 3 isn’t that long, especially not for an open-world game. I raced through the first two-thirds and only slowed down when it became obvious that I was about to finish it. Including a few hours of polishing off parts of the city and climbing giant buildings for the fun of it, I finished it in just over 13 hours.

I died a few times in the beginning when I wandered into precincts that were totally beyond my level, or more frequently from being bombarded by artillery I couldn’t see mid-mission, and once because I completely ran out of ammo and couldn’t punch a boss to death. Otherwise, I swept through wave after wave of baddies with total ease.

You can take on the entire game with a buddy in online co-op, dropping into their world with your own agent. The world didn’t seem to escalate for two agents, though, so we were properly tearing shit up, devouring challenges and boss fights like they were nothing. Upping the difficulty was the only way to counterbalance it. 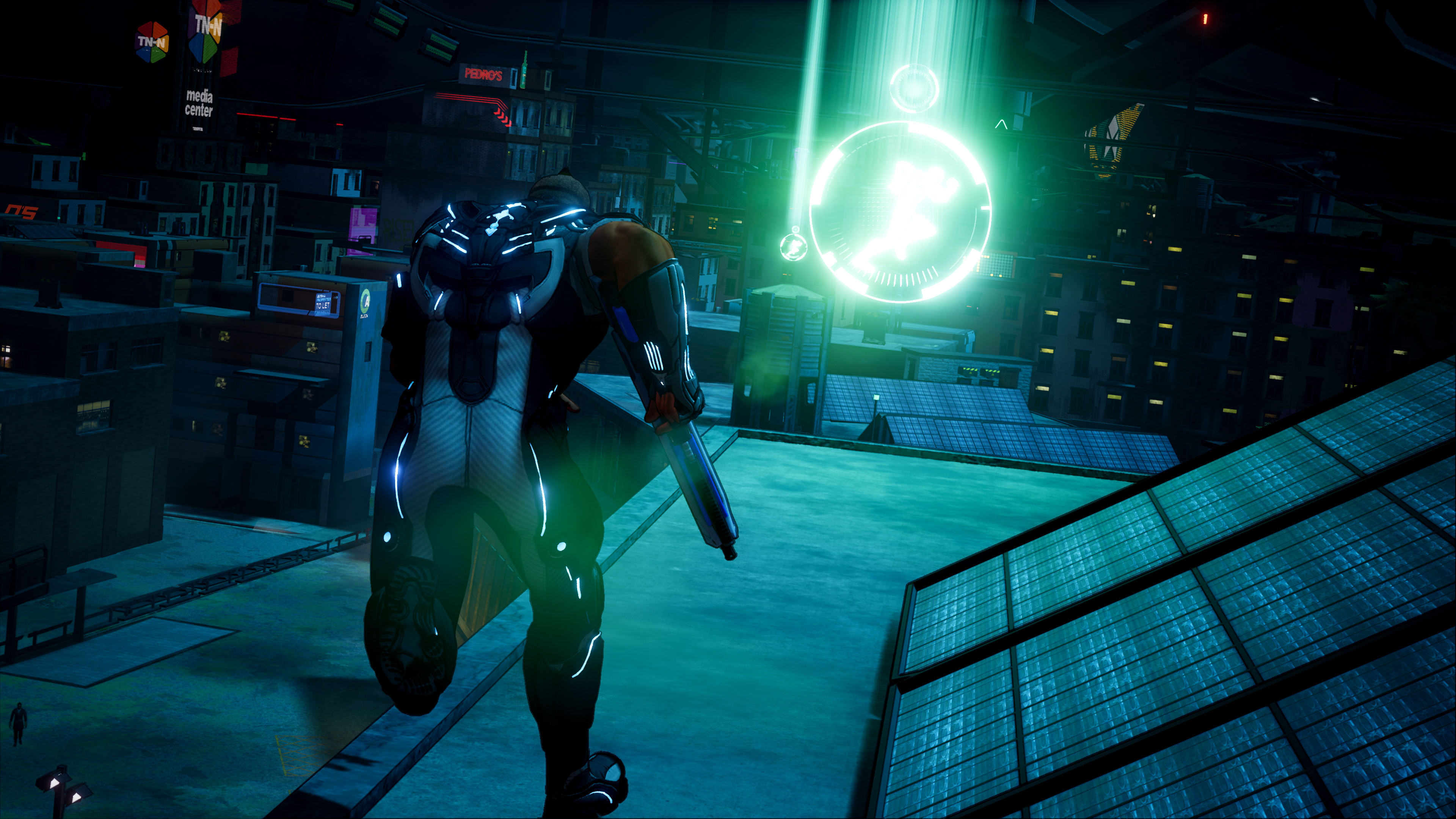 'The best defence is always an unrelenting offence.'

Crap multiplayer, the fact that everything feels weirdly flimsy, and LOSING MY SAVEGAME.

13 hours to finish the main campaign, with most optional stuff done. An hour’s pre-release session with the multiplayer modes and co-op.

Here’s a thing, though: If you’ve played some single-player and want to try co-op, when the game asks you which world slot to use, choose a new save. I thought I was selecting my buddy’s world to join, but no—it turns out I was actually writing over my own save slot with his (less complete) world state.

My mouth was hanging open when I realised this half an hour later, returning to the single-player. How is this possible? In what universe would I want to overwrite my own single-player save-state with someone else’s? If this had happened the other way around, would my friend have had the game completed for him? (Fortunately, your Agent is saved separately from the world itself.

This means you can pick a new world slot and start what is effectively a New Game Plus, keeping all your abilities, whenever you want.)

This is the kind of save-game catastrophe that should have sent me into a strop for days, but I was almost surprised to discover that I didn’t particularly care. To be honest, my in-game achievements hadn’t felt that significant. The relative absence of challenge contributes to a pervasive sense of flimsiness that I could never quite ignore.

Everything in Crackdown 3 feels insubstantial. With the possible exception of the rocket launchers, the guns don’t have satisfying feedback: you point them at people and they fall over. When you’re climbing, it’s like all the buildings have a thin coating of Vaseline. Punching feels like sinking a fist into wet paper.

Even when you’ve got a giant hammer, it feels like you’re thwacking things with a rubber chicken. The car handling is loose and slippery, and buildings are completely immune to the destruction that’s constantly happening around them.

This is odd, because if you recall Crackdown 3’s announcement and the first few waves of pre-release hype a few years back, you might remember that the whole thing was supposed to be built upon unprecedented environmental destruction enabled by Microsoft’s fancy cloud computing.

Now, the destruction has been relegated to a competitive multiplayer mode called Wrecking Zone, a distressingly limited duo of modes where you play in a small, virtual facsimile of a city, rather than the sprawling TerraNova island. I only got to play an hour of Wrecking Zone prior to the game’s release, but was disappointed by its thinness. The only modes are a straightforward king-of-the-hill and a 5-v-5 deathmatch. Crackdown’s weaponry does not seem to have been designed for multiplayer, since homing rockets are OP and half the guns are useless.

Rival players are highlighted from all the way across the map, and it feels like whoever manages to lock on first wins any given struggle. Sure, you can blow up bridges and buildings thanks to The Cloud, but what’s the point?

Demolition is totally absent from the single-player game, in which boulders, bodies, and bullets bounce around like pinballs. This is hardly the only compromise evident in Crackdown 3, which has the air of a project that never quite found a killer feature.

I suspect it’s a bit of a miracle that it’s made it to release at all, given its evident development trials. It’s been through about three different development studios and years of delays, becoming rather notorious in UK games industry gossip.

Still, we’ve ended up with 12 to 15 hours of uncomplicated fun that recaptures the good stuff about the first two Crackdown games, without offering much of an evolution. It’s like the last 10 years just didn’t happen.