Jump Force Does A Lot Of Stuff Wrong, But The Fighting’s Fine

There are many things that bother me about Jump Force, Bandai Namco’s all-star anime fighting game. There’s the massive roster that has only three female characters. The jarring dissonance between the plastic, lifeless anime characters and the realistic textures of their clothing. The jilted gait my character affects while exploring the game’s expansive yet largely empty hub world.

All of these things bug the hell out of me. Then I start fighting, and it all falls away.

The real world has collided with the Shōnen Jump universe, bringing heroes and villains from some of the most popular manga and anime series together to defeat a mysterious threat that plans to merge all realities into one. Champions from Naruto, One Piece, Bleach, Dragon Ball Super and more team up with a new breed of player-created heroes to form the Jump Force. In case fans needed a reason for all this service. 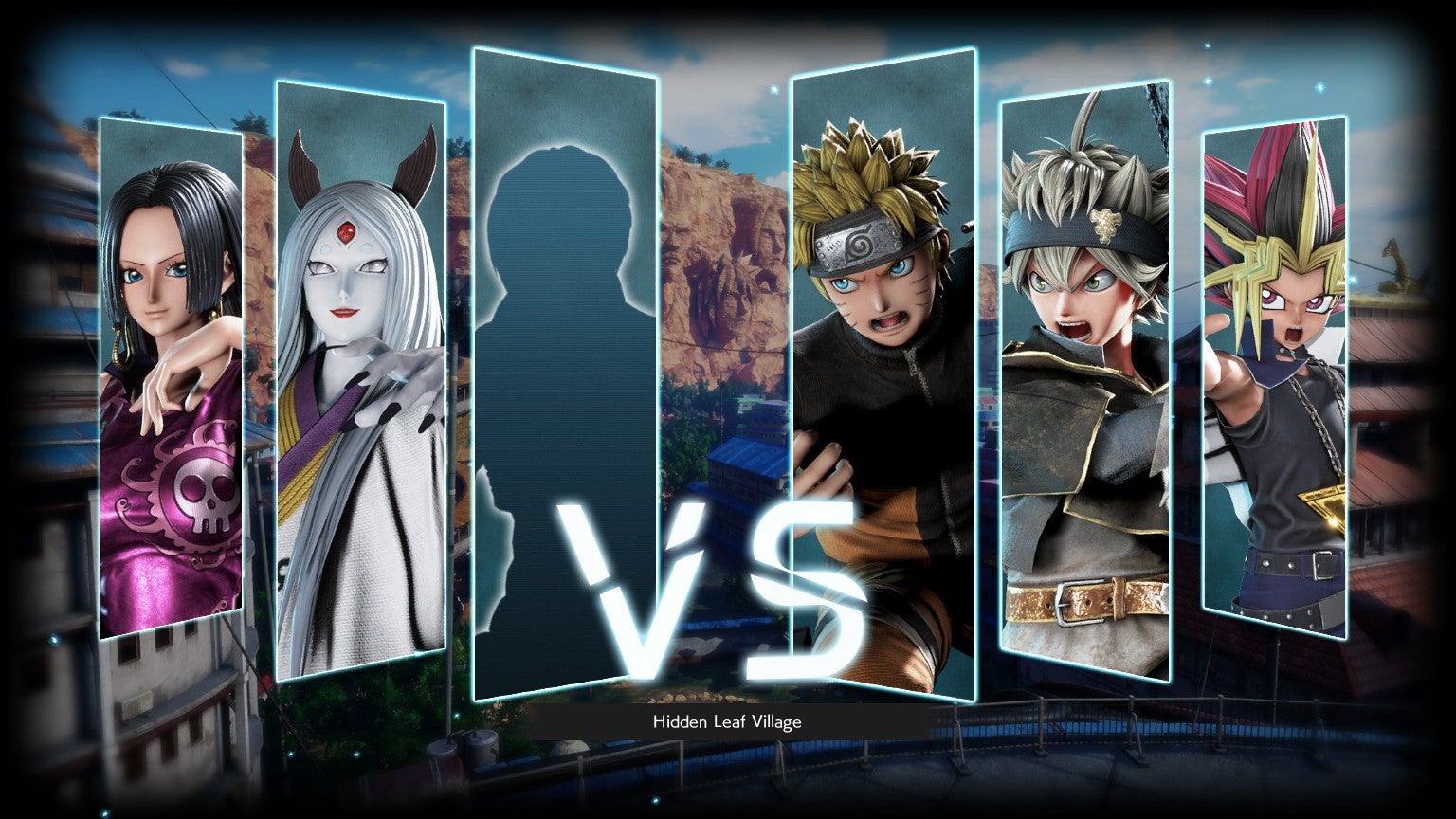 Here my party consists of my create-a-character and two of the three female characters on the 42-strong launch roster.

For those familiar with Bandai Namco’s various anime-based 3D fighting games, Jump Force is a sort of Dragon Ball Xenoverse in terms of plot structure. Players run about its hub world, visiting kiosks that allow them to participate in activities like offline battles, online battles, or missions that advance the story.

Like the Xenoverse series, players create their own character to represent them in this mish-mash of worlds and then battle to earn new equipment and powers based on their favourite characters.

Those favourite characters are looking pretty rough in Jump Force. Rather than the cel-shading that made games like the Naruto Shippuden series and the stunning Dragon Ball FighterZ so appealing, Jump Force attempts to blend anime style with real-world textures. The results range from not-so-great to frightening.

In the screenshot below, from left to right, we have Goku, my create-a-character, and Luffy from One Piece. My character originates from the real world and she looks ok. The other two, with their plastic skin and frozen expressions, are damn creepy in context. 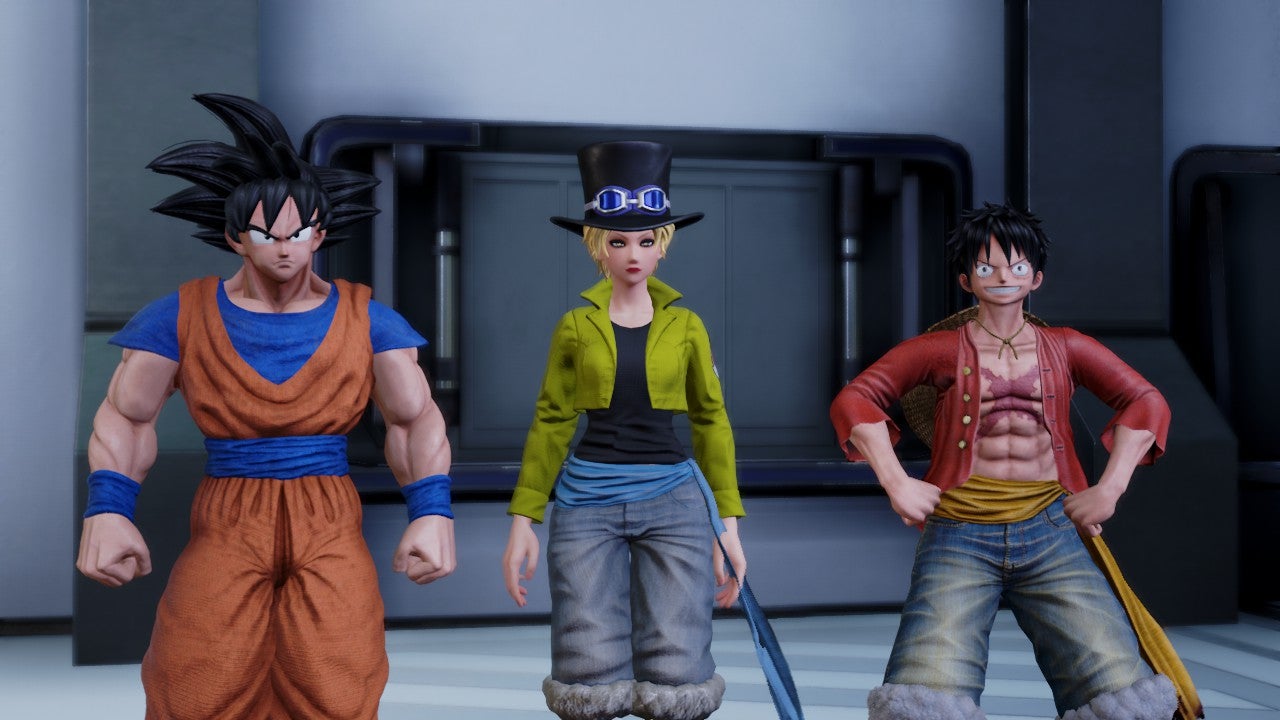 Wandering through the hub with these fellows is like being trapped in a warehouse filled with poorly-made department store mannequins. It doesn’t help that my character, who moves so gracefully in battle, scuttles about the hub like a malfunctioning robot. At least we’re given vehicles to ride. Makes it easier and faster to explore the weird empty corridors and walkways of the hub, where nothing happens, but something could eventually. 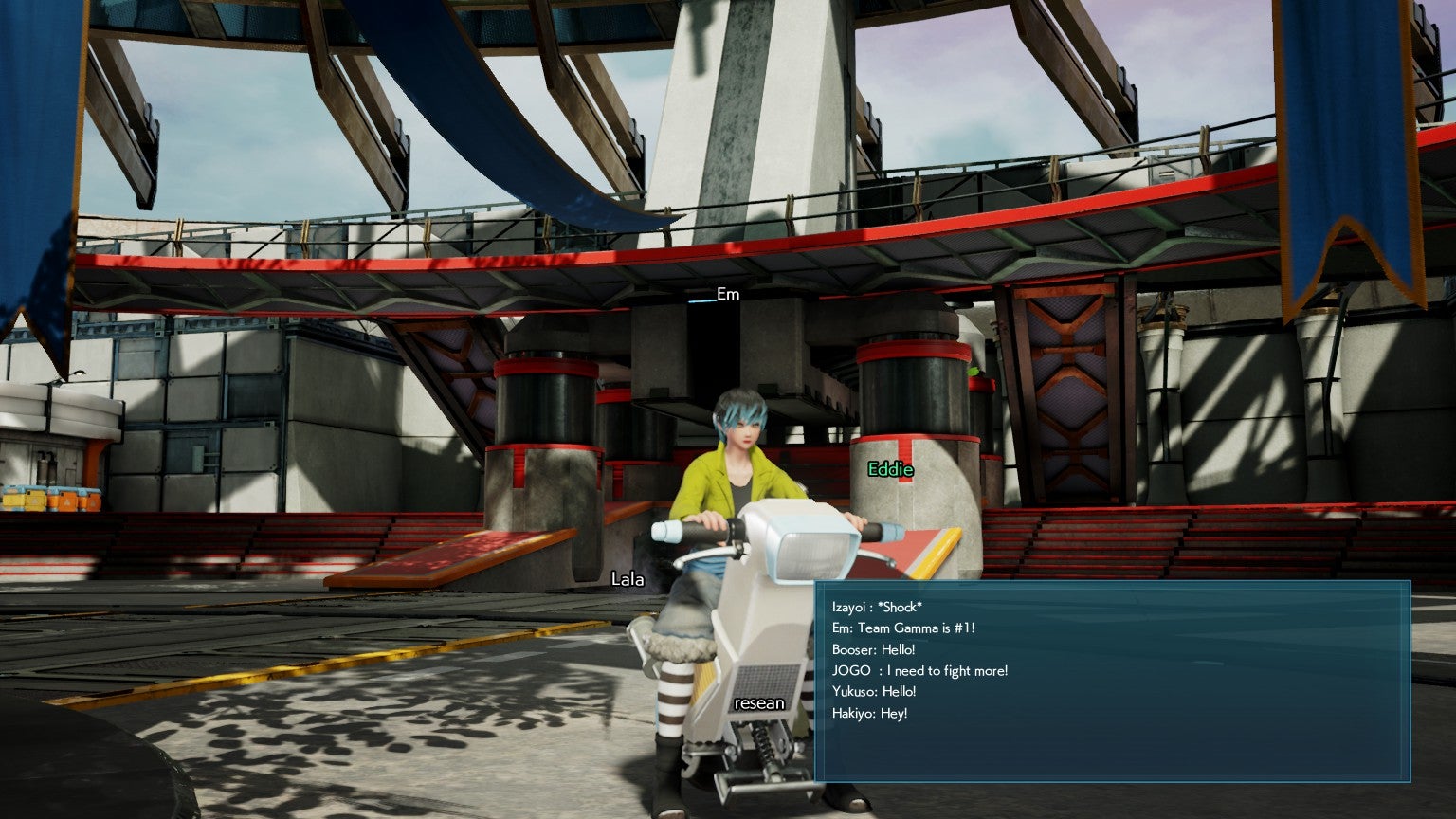 “This feels wrong.” “This feels unfinished.” Those two thoughts crossed my mind often during my early hours with Jump Force. The empty spaces, the odd menu font, narrative scenes where one character speaks and the other is silent with subtitles—there are a lot of things that rub me the wrong way about this game. But while developer Spike Chunsoft muddled up some of the periphery, they nailed the heart and soul of any fighting game: the fighting.

Jump Force is one of the most newbie-friendly 3D free-roaming fighting games I’ve encountered. There are two attack buttons, light and strong, which players can pound to perform auto-combos. There’s a throw button, which is useful for when the opposition tries to hide behind the block button (R1). L1 allows players to chase their foes or escape, if they have enough meter to allow for it.

Holding R2 charges the super meter and, in combination with the controller’s face buttons, executes special attacks. Pressing the right analogue stick down awakens a fighter and transforms them should they possess an alternate form. It might seem like a lot written out, but it’s incredibly easy to pick up. 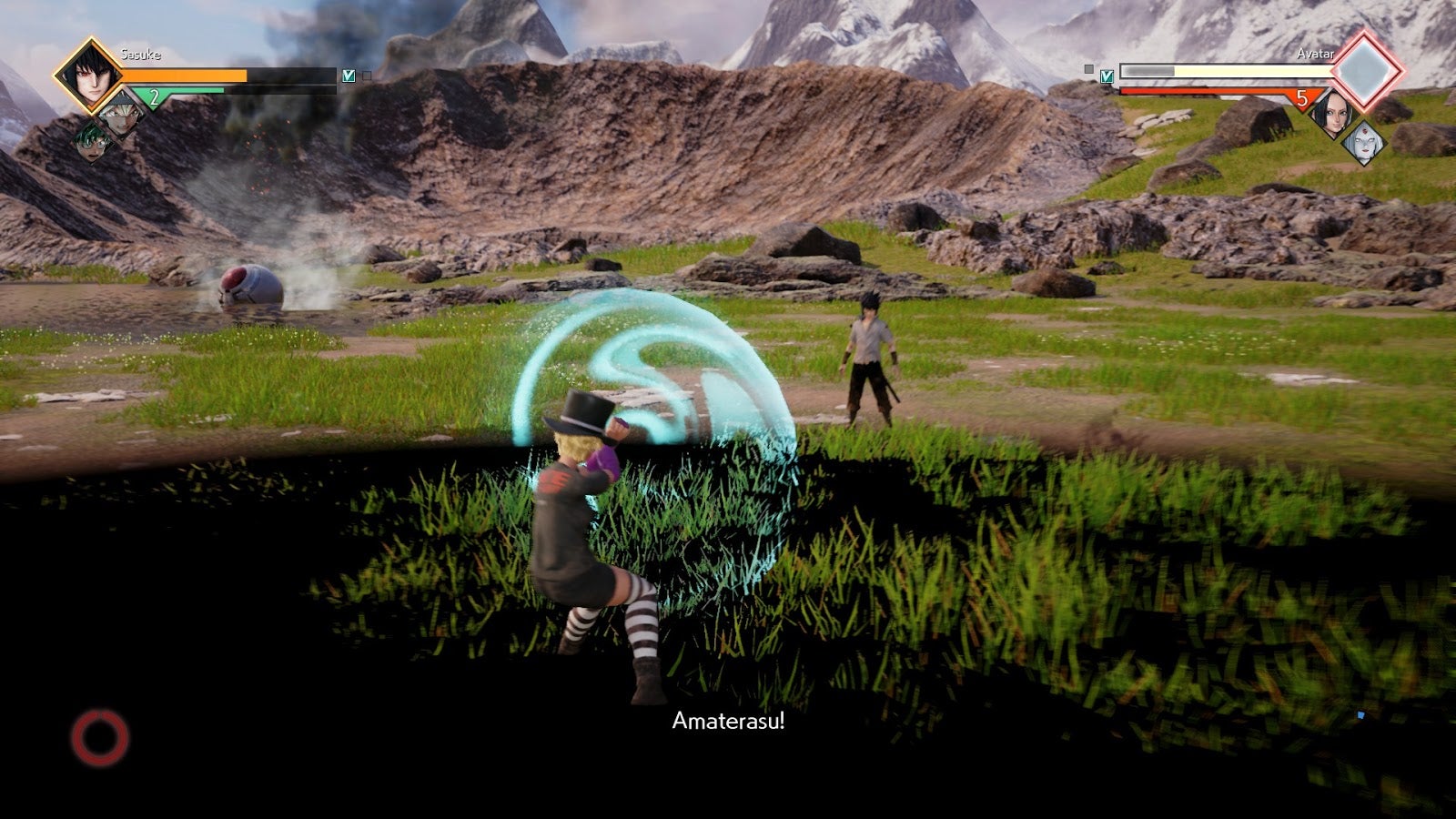 It’s so simple even I can block attacks!

Jump Force’s battles are three-on-three affairs, but all three characters on a team share a single health bar, so there’s not a lot to manage. Swapping characters in and out with the L2 button performs a quick team-up attack, but beyond that, swapping mainly comes down to preference.

It’s an elegantly simple fighting system that’s perfect for new players, sort of a more basic version of the one used in the Naruto Shippuden Ultimate Ninja Storm series. Some characters lean more towards ranged attacks than close quarters and some are more defensive than offensive, but they all control pretty much the same. Once a player has the basics down, hopping from character to character or outfitting their original creation with a wide variety of special skills should be a piece of cake.

The fighting is so simple that at first I feared I would quickly grow bored. But that simplicity means there’s a nice variety of opponents to play, both CPU and human. Between the simple joy of playing and the impulse to collect as many costume pieces for my OC as I possibly can, Jump Force is a game I could see myself playing for quite some time. 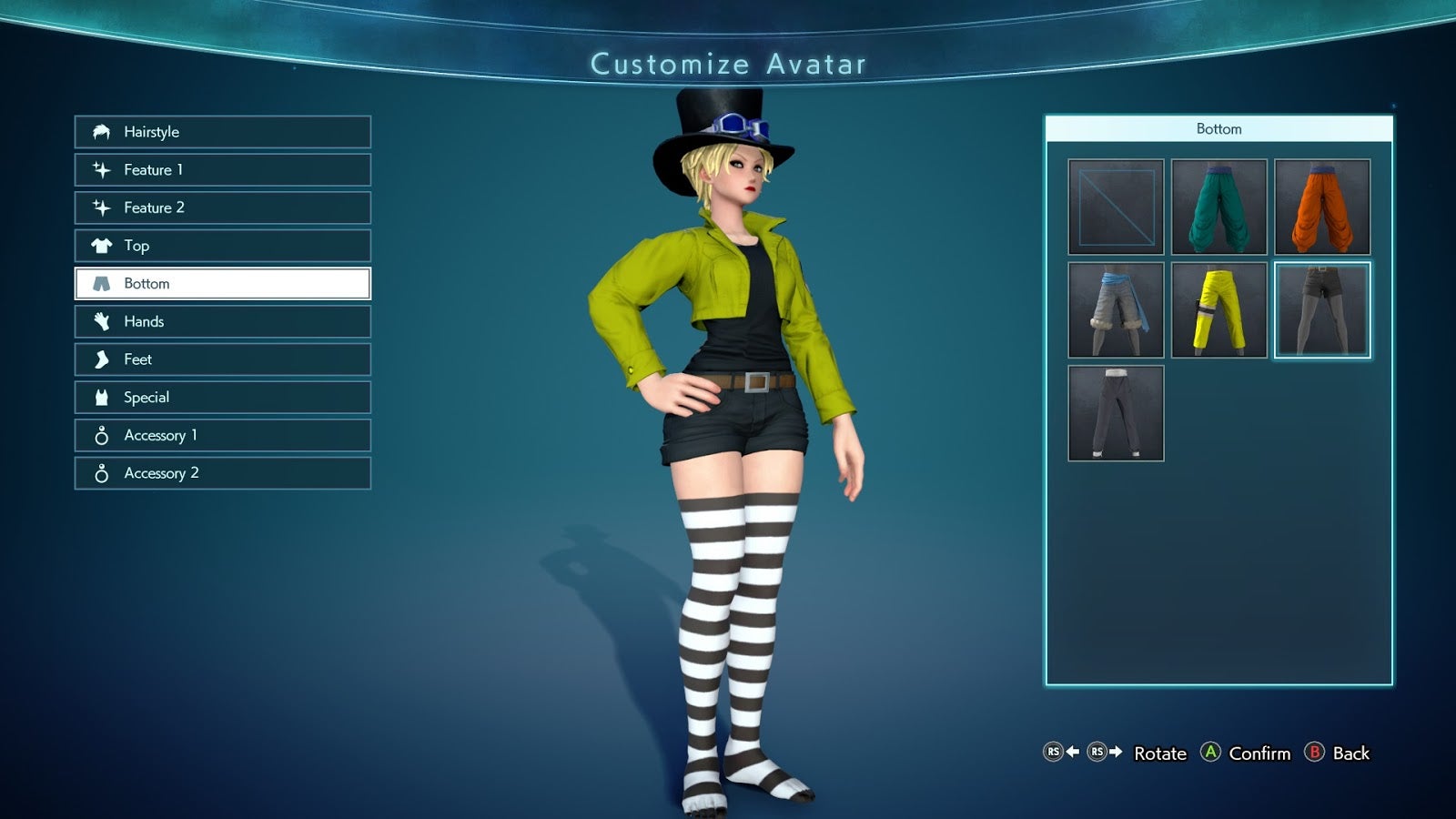 I am, as always, a sucker for playing dress-up.

I’ve got a sort of love/hate relationship going with Jump Force, but so far the love is winning. I may never get used to those horrible plastic faces, and I’ll probably never consider the hub world my home, but that’s fine. As long as I can leave that nonsense behind and charge into fun battles with my custom character and two anime friends, I’m good.