There are too many amazing JRPGs in the 16-bit era to crown one the best. But there is a pantheon that includes classics like Final Fantasy 4 through 6, Chrono Trigger, Terranigma, Breath of Fire, and the Phantasy Star games. Phantasy Star IV for the Sega Genesis was easily the best JRPG on the system, a “phantastic” fusion of storytelling, 16-bit art, and gameplay.

The game was directed by Rieko Kodama, who was recently in the news with the announcement that she’d be receiving the Game Developers Choice Awards’ Pioneer Award. I’ve had the honour to meet Kodama and have expressed my admiration for the series countless times, especially Phantasy Star 2 for its brilliant depictions of a utopia and its fall.

Phantasy Star 4 is the story about what happened to the fallen utopia a millennium later. 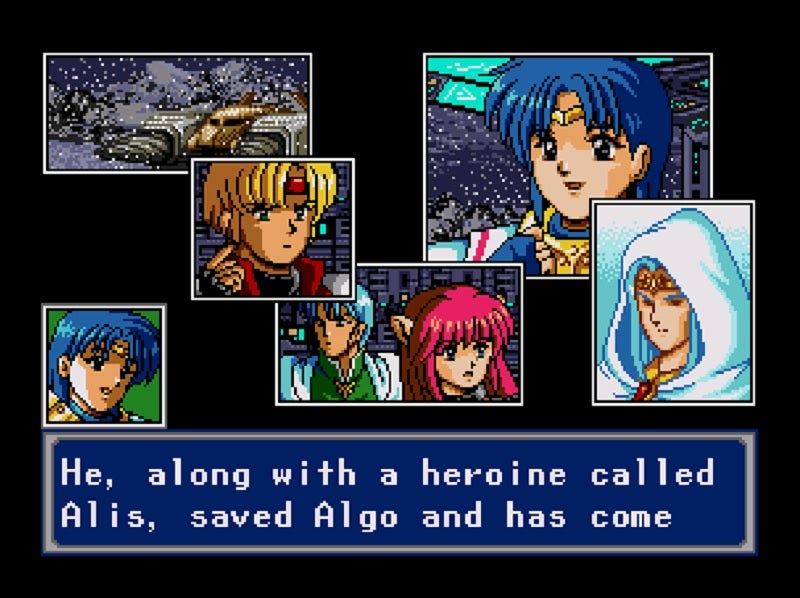 Time and legacy are an integral part of the tapestry that weaves together into Phantasy Star 4. The decisions people made in Phantasy Star 1 and 2 have a huge impact on the future. This has an even more sinister meaning for those who finished Phantasy Star 2 and learned the sad truth: Terrans were responsible for the Mother Brain that brought ruin to the Algo System.

At the same time, the technological marvels they established have continued functioning, shepherded by a number of androids. But the evil entity called the Dark Force has returned and corrupted the planetary systems that had once made the planet a teeming paradise.

It’s against this backdrop that you start off as Chaz Ashley, a young bounty hunter being guided by the more experienced hunter, Alys Brangwin.

I’ve always loved Phantasy Star’s unique fusion of fantasy and science fiction that gives the series so much of its identity. The characters wield swords and guns to battle, fight giant sandworms and ride hydrofoils across the ocean. A mystery propels them: Why are so many biomonsters being created?

Finding the answer takes Alys and Chaz across a variety of towns as they meet a diverse group of characters, from the enigmatic and cocky Rune, to the revenge-driven Gryz, and the curious academic Hahn who wants to get to the bottom of the crisis.

In Birth Valley, Alys and Chaz discover that the Bio Plant has gone awry, which in part explains the monster problem. This plot thread is a nod to Phantasy Star 2’s middle act, which ends in the death of your companion, Nei. Inside the Bio Plant in Phantasy Star 4, we meet Rika, who was created by the AI that controls the Bio Plant and is the “product of a thousand years of improvement on genetic information from a prototype prior to the ‘Great Collapse.’”

Rika is essentially Nei’s descendant and becomes a key member of the party. It was a nostalgic connection to an old party member I had cared about and missed. Rika is one of the most memorable characters in Phantasy Star 4. The one scene that stays with me is the first time she emerges from the Bio Plant and sees the blue skies. She’s in awe, delighted by the expanse as well as the vibrant colour of the flowers. The music that plays conveys her sense of childish curiosity perfectly.

Manga-style panels give a more cinematic feel to the game’s cutscenes, each visual square stacking on top of the other to provide juxtaposition or emphasise a specific mood. This helps highlight the mentor-pupil relationship of Alys, who is teaching the younger Chaz. Chaz was from a distant country with a dark past, but Alys gave him a chance at a new life. Their witty bantering and their genial familiarity is a big part of what makes the first leg of the adventure so much fun. 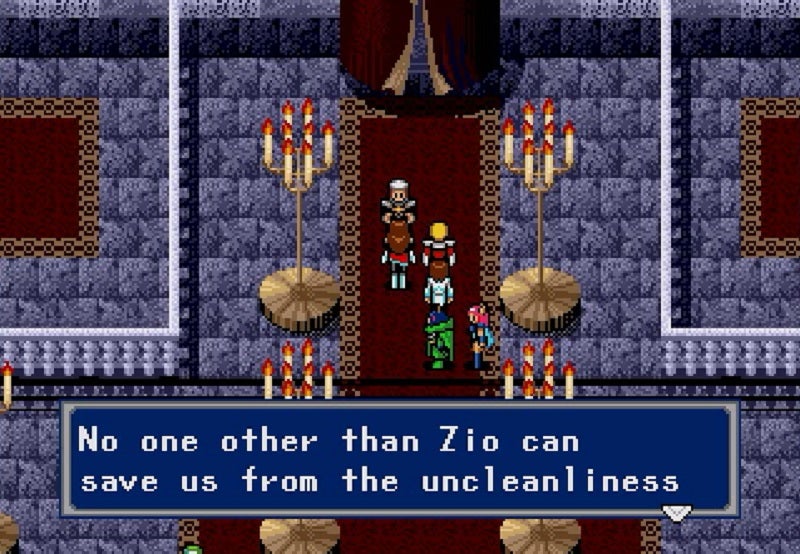 But things take a dark turn with the entrance of the black magician, Zio. Zio isn’t just launching a physical attack on the Motavians, even though he’s destroyed towns like Molcum. He wants to enslave them spiritually, creating a church full of fanatic followers. One of his acolytes is seen screaming on the ground in a religious frenzy and another of the clergy members faints in awe at the mention of Zio.

Consumed by his personal failure as a magician and a twisted hatred of existence, Zio made an unholy pact with his god, Dark Force. It’s Dark Force giving him his power and a promise to destroy the world. “Total annihilation of life,” Zio states. “What a fine thing! Death to all that lives!”

When your party finally does fight him, Zio barely moves, contemptibly using his arms to cast spells. He is impervious to attacks, Dark Force’s face hovering behind him. It’s almost as though he’s taunting the entire party until he gets tired and launches a “Black Wave” at Chaz. Alys jumps in his place, taking the blast. The party, seeing their attacks barely ding Zio, retreats.

There is a genuine sense of helplessness, especially as your leader, Alys, is badly injured. Without her to guide the party, I felt lost, unsure what to do. Alys directs them to find Rune and the psycho wand which can nullify Zio’s magic barrier. 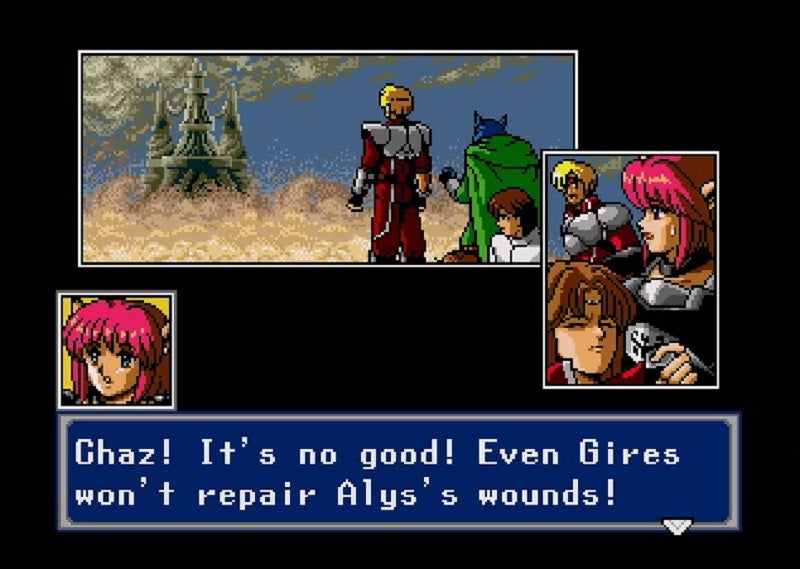 A lot of the elements may seem familiar, even tropish. But the dialogue, art, and music play so well together that you become totally immersed in the millennial battle. As events become more desperate, Chaz learns to rely on his friends as they fight together. They eventually leave Motavia for the wintry planet of Dezolis.

There is a strong sense of cycles with recurring motifs and locations, like the Air Castle from Phantasy Star 1 coming back in a rage among the debris of the destroyed planet Parma, or a town founded by the descendants of Phantasy Star 2’s space pirate, Tyler. There’s even a nod to the black sheep of the series, Phantasy Star 3, with the remains of one of its massive spaceship worlds lying in ruins for you to explore. 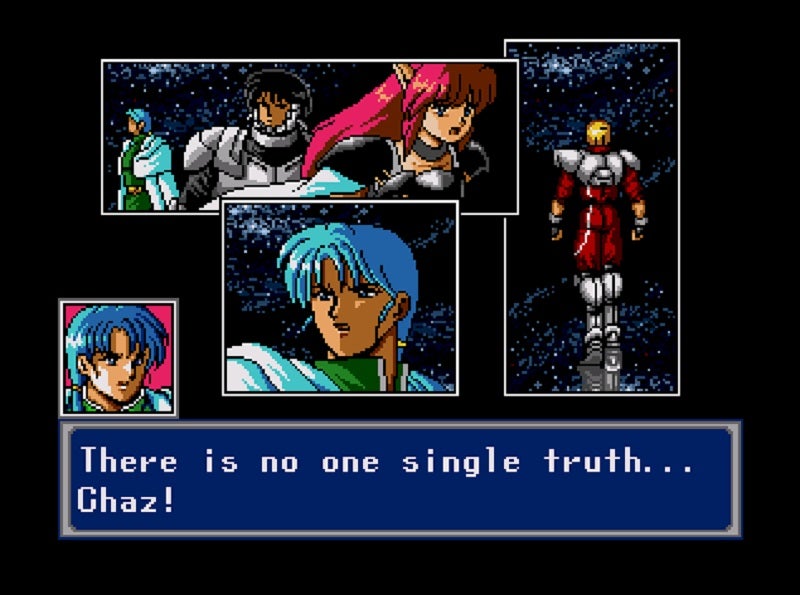 Rieko Kodama and her team did a great job of refining the game mechanics for 4. I think one of the biggest hurdles for players of Phantasy Star 2 and 3 was the intense amount of grinding they required (as well as the super complicated dungeons). The difficulty curve is much more balanced in the fourth Phantasy Star so that even though there is still a bit of grinding to do, it’s nothing as soul-crushing as 2 and 3.

The battles are much more dynamic since this is the first time in the series that the players, enemies, and background all appear at the same time. In 2’s battles, there were onscreen characters but no background art, and in 3 they brought back the environments but dropped the character art. The music is catchy, the flow of battle is quick, and macros allow the automation of battles, which was very convenient. 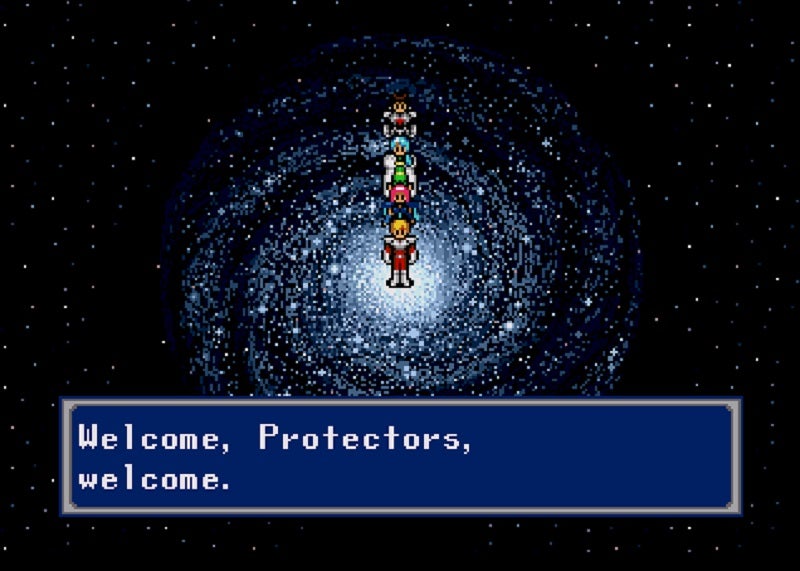 The party eventually discovers there’s an all-new planet, Rykros, and learn the true origins behind the planets of the star system. An ancient battle between the Profound Darkness and the Great Light was at the root of it all. Unfortunately, the destruction of Parma in Phantasy Star 2 upset the precarious balance established long before they were born. The people living on the planet are suffering for a fight they had no part in.

I love the fact that Chaz has serious moments of doubt throughout the game. When someone important to the party passes away, he is devastated, unsure of what to do. It takes a somber exchange with both Rika and Rune to help him muster motivation to continue. Later on, when Chaz learns that the fate of the entire Algo Star System depends on their actions, he is overwhelmed by the pressure and upset at the unwanted burden, lashing out in understandable, if selfish, defiance. Why does he have to fight the Profound Darkness when the Great Light has gone away? 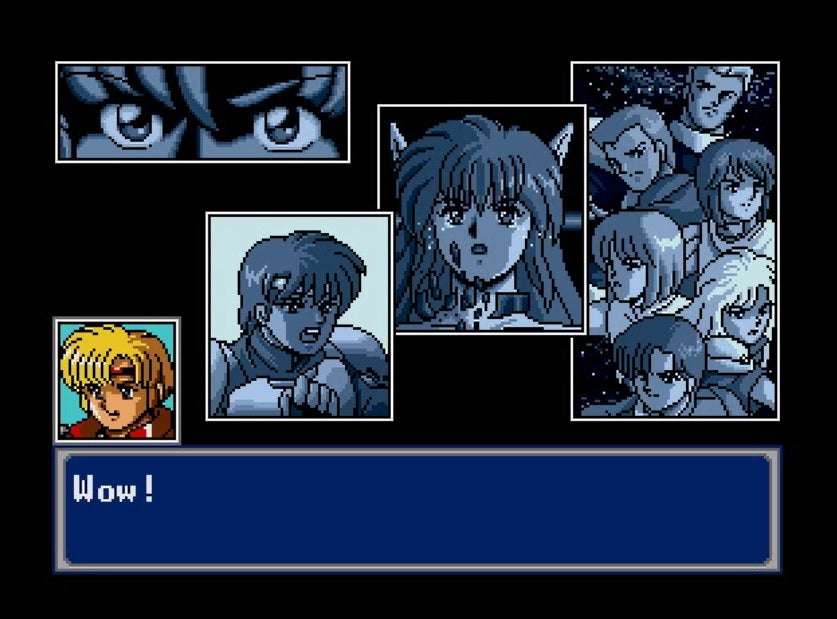 It’s at this point that Chaz is taken underneath the Esper Mansion, which is the home of one of the heroes of Phantasy Star 1 and 2, Lutz (aka Noah). Chaz is granted the legendary sword, the Elsydeon, and then experiences a vision of all the heroes of Phantasy Star 1 and 2. It was incredible seeing Rolf, Nei, Odin, Myau, and Rudo again, the memory of all the hours I’d spent grinding to level up these characters flooding back to me. The eternal fight against Dark Force had taken many permutations, both in the Algo Star System and for me in the outside world playing through each iteration.

I’ve played through 2 and 4 multiple times, and I remembered where I was each time I started fresh and how different my life was. Seeing Chaz’s vision made me think of all those years in between each game, the choices I’d made in my life, the friendships, the bonds, and even the conflicts. I’ve been playing the Phantasy Star series as long as I can remember playing games. Although it’s not a millennium separating each playthrough, the sense of RPG legacy stirred me.

I don’t know how many more times I’ll get to play the Phantasy Star games, but I love each trek. It’s not just the cool science fiction and superb art that attracts me to the series; it’s the timeless story about courage under desperate odds and friendships that get tested, then forged into something stronger, that makes me wish Phantasy Star 4 hadn’t been the end of the millennium, but rather a new beginning.