Sekiro: Shadows Die Twice, the latest game from Dark Souls and Bloodborne development studio FromSoftware, is out today. After 30 hours of fighting and struggling and strategising and getting good, I can say I’ve been having an absolute blast.

I’m a big action gamer, though I skipped the Souls series. For a take from franchise veterans, you can watch more than an hour of footage of the game with commentary from my colleagues, Chris Person and Tim Rogers.

As for me, having grown up on Tenchu, Ninja Gaiden and Onimusha, I was more than ready to take on the game’s world as the Wolf, a lone shinobi trying to save his master in the face of deadly enemies and insurmountable odds.

Without spoiling too much of the story and gameplay, I get the sense that I’ll want to spend far more time with the game before delivering anything more than impressions. There’s plenty more for me to play and explore, so a full review will come a little later.

For now, here are some thoughts about the gauntlet I’ve run getting good at Sekiro. The world is hostile and expansive: Sekiro takes place amid the mountains of feudal Japan at a time where the land is ravaged by chaos and bloodshed. The setting is tense and desolate, filled mostly by enemy samurai and the occasional crazed beast.

There are few friendly characters—some ousted nobles, injured soldiers, and people who have been driven half-mad by their crumbling world. Every step in a new locale must be taken with extreme vigilance. As you progress through an area, though, you see and learn more of each area’s nooks and crannies. Eventually you find shortcuts that link zones and develop a mastery of your environment, only for the game to then rearrange enemy locations and offer a new challenge.

The grappling hook is neat: Sekiro’s world is flush with discoverable items and areas, and it’s generally worth your time to find them. Early into the game, you receive a prosthetic arm that includes a grappling hook. You can use it to travel across rooftops and trees, flying from place to place to get the jump on your enemies or otherwise escape when things get a little too hectic.

It also opens the world up to lots of exploration—there’s often a little outcropping you can zoom over to for some useful items, or a hidden pathway to more resources, or in some cases, a boss fight you’re not emotionally prepared for.

The combat is deliberate and interesting: In a game where just one mistimed dodge could result in your untimely death, finding the quickest possible way to kill an enemy is frequently an incentive. To do that, you need to understand Sekiro’s core combat concept: Posture.

You and your enemy each have a Posture meter which goes up when you take a direct hit or block a blow rather than parrying it. The higher it goes, the worse your Posture gets, making you more susceptible to deadly blows. If the meter gets too high, your Posture breaks and you stumble, vulnerable to any attacks the enemy may use, which often results in a quick death.

On the other hand, as you attack your enemy, you can raise their Posture as well. Once their meter is full, you can strike a deathblow, which instantly kills most regular enemies and removes a full meter of health from certain bosses.

What makes this interesting is the wide array of battle situations you’re given, both with boss fights and regular scuffles. Different enemy types require different strategies; a spear wielder, for example, is likely to attack more with highly damaging thrusts, requiring a different sort of counter from a regular deflection.

Some enemies are liable to grab, which must be dodged outright. There are unique counters for several specific combat situations, making vigilance and flexibility paramount for success.

Add to that the fact that vitality (health) affects Posture, and the already-multilayered battles become even more complex. As enemy vitality lowers, their ability to recover their Posture does with it; some boss fights require hit-and-run tactics that slowly chip away vitality followed by a direct onslaught once their health is low enough to do real Posture damage.

It’s generally quicker, even after lowering Vitality, to max out an enemy’s Posture meter, so this is often the way to go. Death matters: You just get one save file, meaning you can’t take back any deaths you experience, and in Sekiro, each death has real consequences. In addition to the loss of half your money and skill points, accumulating deaths eventually causes Dragonrot, a sickness that afflicts computer-controlled characters you interact with in real-time.

They’ll cough when you interact with them, and it seems like certain dialogue options disappear. Having a Dragonrot indicator in your inventory means that upon dying again, you have less of a chance of receiving Unseen Aid, a base one-in-three chance of not losing gold and skill points.

Additionally, any non-boss enemies you kill respawn and you’re sent back to the last Sculptor’s Idol (the game’s resting points) you used.

Players are afforded a resurrection ability early on, and it’s up to them whether to choose to use it as a second wind toward the culmination of, say, a tough boss fight, or a signal to turn tail and get the hell out of dodge while they still can to regroup. I did a lot of getting the hell out of dodge early on but felt like a complete badass once I got better at making situational calls.

Stealth is essential: Sekiro plays like a puzzle game as much as an action game. Because of its battle mechanics, even the wrong run-in with otherwise manageable mooks can turn deadly. You have to assess your surroundings and take one of several approaches to dispatching or avoiding enemies.

Each area has a unique layout that you can learn via careful exploration. Are there archers on high ground ready to shoot me in the butt while I think I’m being cool and stealthy? Is there an enemy with a torch I should take out first to avoid being roasted to a crispy golden brown?

It’s also possible to avoid areas entirely, either sneaking past them or sprinting through and then shamelessly running away, but you then stand to miss lots of juicy items and mid-boss drops. You can tell when you’re spotted via a convenient sound akin to one you might hear accompanying a slasher flick jump scare. It’s very soothing!

There are some funny, but ultimately harmless, glitches: This doesn’t really take a whole lot away from the game, in part because its earnest tone is often undercut by dark humour, but sometimes the ragdoll physics of dead enemies causes funny results. Enemies would occasionally twitch or jerk or get stuck in place, and upon turning the camera, I’d occasionally see a still-living enemy standing on a corner and sort of floating down a few inches to take his proper place.

There were also cases where, upon moving away and coming back to an area, I’d see enemies I’d previously killed going through a dying animation again. 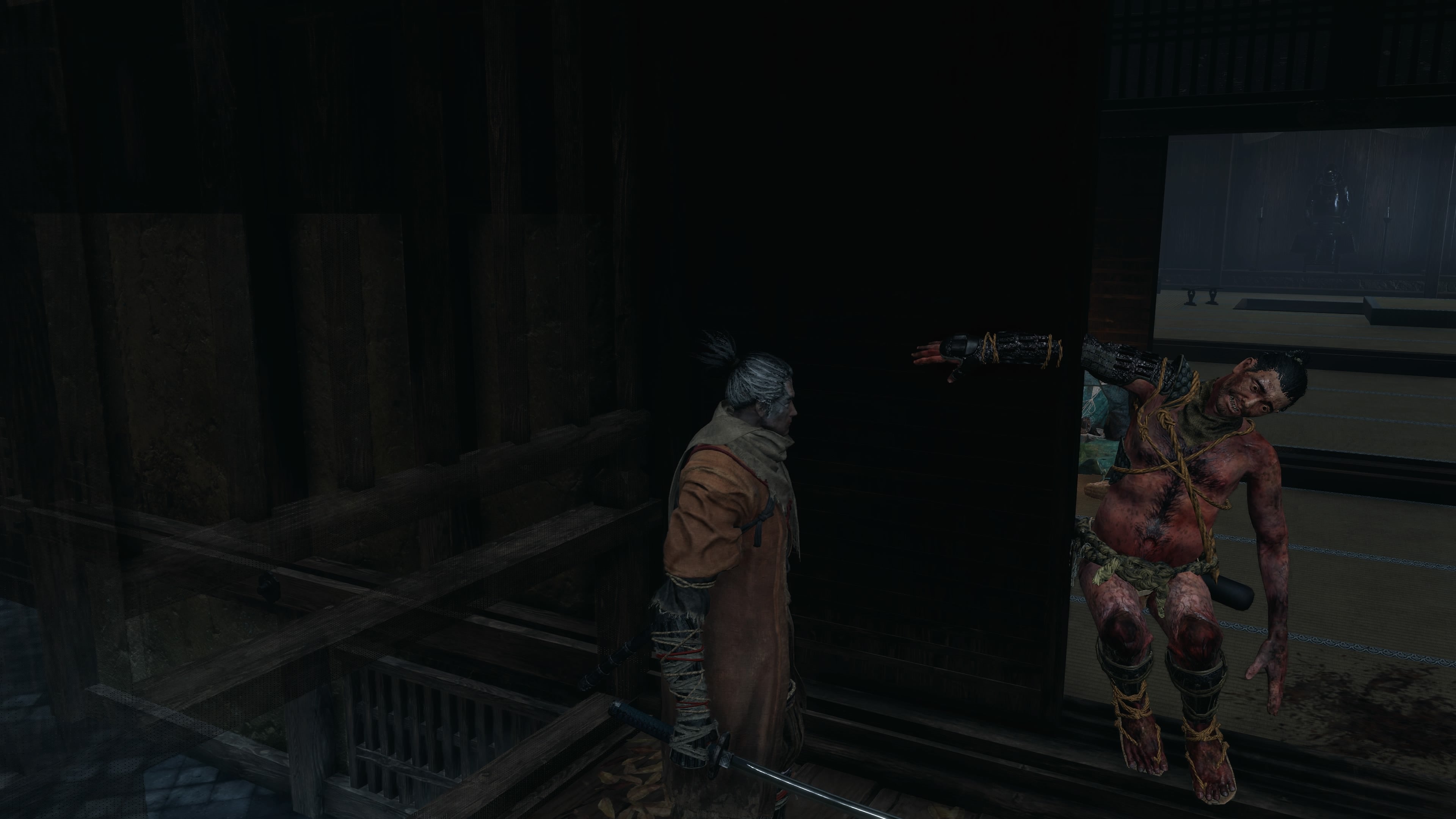 Unlockable skills and tools genuinely feel worth it: Whereas unlocking new skills in some games feels like adding cherries and whipped cream to an already-sufficient arse-whipping ice cream sundae, just about every skill in Sekiro has the potential to dynamically alter your strategies, whether in normal confrontations or boss fights.

Many, like early prosthetic upgrades, create invaluable vulnerabilities in specific boss encounters. There’s the Loaded Axe, which, true to its name, is a large-as-hell axe that is helpful against shielded enemies but also good for quickly building an enemy’s posture meter. Some radically change the nature of combat or stealth, like Ichimonji, a powerful downward sword swing that recovers posture and makes me feel like I’m cracking skulls.

In all, Sekiro has been difficult to master but has never felt unfair. I found myself actually, sincerely getting good, and the process felt great. No death to a boss felt wasted as I learned and processed a little more each time while formulating my strategies. The world itself is dynamic and fun to explore, and the characters in it are sparse but charming – I would say the same about the story, which is slowly unravelling in bits and pieces I’m gleaming from the world around me. I can’t wait to see what the endgame has in store.