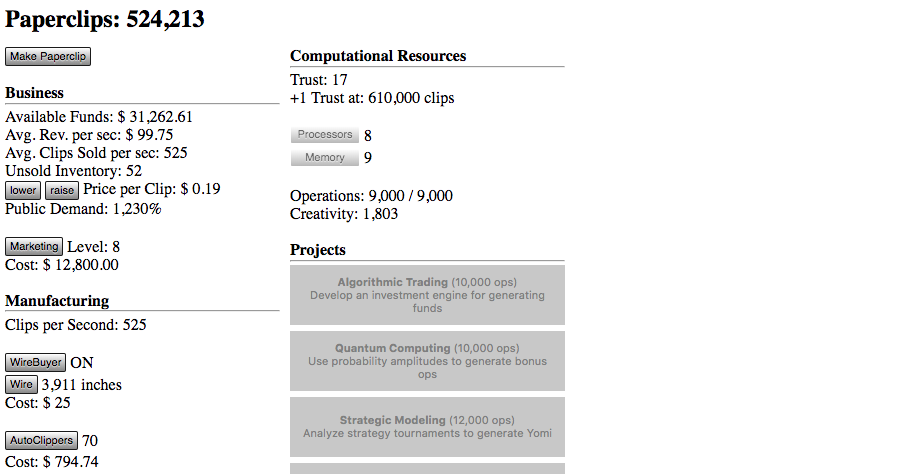 Clicker-ish game Universal Paperclips may be getting a feature-length film treatment, The New Yorker first reported this week. Intrigued and a little confused, Kotaku spoke with the filmmaker over email to get more details.


When the average person thinks of a video game movie, they might recall Final Fantasy 7: Advent Children, Resident Evil, or Mortal Kombat. Universal Paperclips, a 2017 web-based game with no graphics or apparent characters, is a pretty odd inspiration for a film.

The player first creates one paperclip at a time by clicking on a box, and as they gain more money, they gain access to features that help them finance, market and finally automate their paperclip factory.

Its creator, NYU Game Center professor Frank Lantz, says the player is actually an AI. At the end of the game, after the cut-and-dried mechanics slowly give way to more advanced simulations, the AI is finally able to convert the entire universe into paperclips. In 2017, the game went viral.

“Part of what makes it such a good game is that it’s storytelling method **does not work** in any other medium,” Roldán told Kotaku over email. “You can’t replicate the addictive thrill of watching the number of paperclips go up on a podcast or a book, you know?

“But as I thought about it, I realised there were elements of it that were adaptable — it’s about a topic that people are interested in, but with a really fresh take. I liked that it was about real-world scientific thought told through an absurd lens. The way it continually upends your expectations was also thrilling.”

It’s still unclear how the movie will adapt these elements, but Roldán disclosed a little to The New Yorker:

“As you play, you keep getting these increasingly large multimillion dollar gifts to sort of placate your ostensible keepers. We know who these characters are in our modern world: Hyper-rich tech titans who are not super interested in questioning the thing that has enriched them — with the justification that they are healing the world at large.”

Roldán demurred when asked for a script excerpt but says that it’s nearly finalised and that he’s spoken with some interested producers. It will be exciting to guess what Universal Paperclips might become.