In Shotgun Farmers, You Shoot Guns And Your Bullets Grow New Guns In most multiplayer first-person shooters, you don’t want to miss that clutch headshot because 1) it’ll mean giving up your location, and 2) missing just isn’t fun. In Shotgun Farmers, there’s a third factor to consider: your bullet will embed itself into the ground and sprout a happy little gun tree, which your enemy can then harvest for guns to shoot you back.

Shotgun Farmer is a multiplayer PC competitive shooter with a bunch of farm-themed modes. Its gun plants, modelled after real-life crops, grow slowly over time. If you pluck a corncob shotgun when it’s a sapling, it’ll only have one round in it, as opposed to a full-grown shotgun plant’s eight rounds. Once a gun is spent, your character automatically hurls it to the ground, leaving you armed only with a shovel. All of this means you have to think carefully about when and where you shoot.

This also means that the pace of matches evolves over time. Early on, the ol’ asparagus sniper fields are barren save for a few select weapon spawn points, leading to cautious engagements and desperation-soaked shovel duels. After a few gunfights, more plants start to spring up, making mid- and long-range engagements more viable. By the end, there are typically weapons of all shapes and sizes everywhere: watermelon machine guns, rose petal flamethrowers, tomato grenade launchers, cow milk molotov cocktails (called “moo-lotov cocktails,” of course).

It’s extremely satisfying to blast two opponents and, without breaking stride, snatch up a new gun from a nearby plant to finish off a third. I legitimately felt cool as hell while playing this game—at least, until I remembered that I was a pink-haired, monocle-wearing farmer wielding a gun made of corn.

Levels and modes, too, adhere to the theme of “farmhouse hootenanny, but also MURDER.” In addition to a farm, there’s a roadside stop, a wild west town, and also more outlandish fare like a graveyard and an island getaway. Modes run the gamut from themed variations on team deathmatch and king-of-the-hill to modes where players chase chickens around the map and steal pigs from each other.

Shotgun Farmers is fun, but it suffers from some pacing issues. Despite the abundance of different weapon types, in nearly every match I played, regardless of mode, shotguns — the default weapon when you spawn — ended up growing everywhere, turning most skirmishes into sloppy shotgun brawls. I still had a good time, but it got repetitive fast. On top of that, movement and shooting really feel like you’re wielding a loosely taped-together handful of vegetables instead of a gun, and not in a good way. Lacklustre sound design doesn’t help, making it too easy to take opponents by surprise. 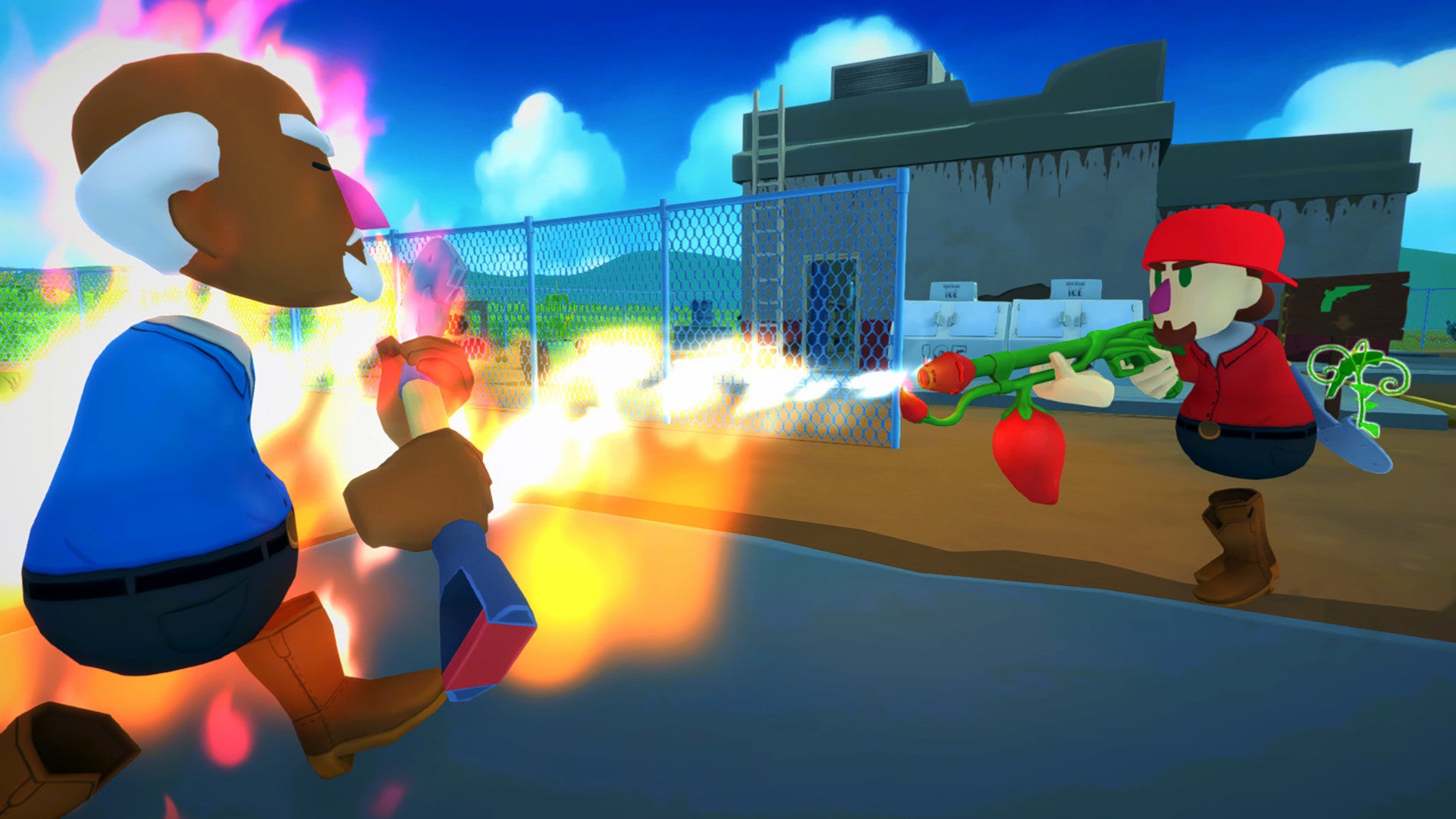 There are bushels of promise in Shotgun Farmers’ premise, but at this point, I can’t see myself coming back to it all that often. If you’re looking for a lightweight shooter to snack on in between meatier multiplayer meals, it’s a fibre-rich good time. Just don’t be surprised if you’re still hungry afterward.