As of this week, Final Fantasy 14’s World Visit service is live, allowing players to zip between servers and check in on other worlds. The result has been a wonderful sort of chaos. New friendships, massive economy shakeups and a few troublemakers trying to stir up the pot. Once closed-off servers have now been opened, and on my own homeworld, that’s been an incredible sight to behold.

World Visits allow players to leap between servers on the same data centre. These are collections of servers, of which there are now three, loosely organised by interest. For instance, the Aether collection of servers is where you’ll find some of the most hardcore raiders. Meanwhile, Crystal is mostly focused on social activities.

I play Final Fantasy 14 on a massive server called Balmung. It’s one of the oldest and, for a time, most exclusive. World Visits have lowered the walls around this server. Watching the swarm of new visitors entering over the past week has been exciting, even as certain things I took for granted are starting to change.

One of the most immediate effects of world visiting on Balmung has been a shift in prices on goods. Prices for armour and other gear were infamously low on Balmung, as the server’s community preference for roleplaying and social activities meant the demand for raid quality gear wasn’t as steep as other worlds.

Balmung is a legacy server that’s been around since Final Fantasy 14 launched, which means that there’s a lot of money circulating in the economy. The result was that if you wanted to buy a viable set of crafted raid gear, particularly as Stormblood finished, you didn’t have to pay much.

This was a well-known fact even for players outside of Balmung, and so as soon as visits were possible, stocks of goods such as armour and food were sold out.

Prices spiked correspondingly. A month ago, I could have bought a top-end Rakshasa chestpiece for my character at prices under 100,000 gil, but now, the price is anywhere from 245,000 to 300,000 gil. That still isn’t a lot of money for most players, but the effect has been amusing to watch in real time.

Then there’s the culture clash. Balmung is one of the unofficial roleplaying servers, where players congregate and often act as their characters. This leads to a lot of cool storylines to follow, tournaments to fight in, stage plays to see, and cities with a bustling atmosphere.

That does happen, with certain city streets lined with folks who are clearly soliciting and even player-maintained brothels, but in my experience, that’s far from what defines us and it’s never been intrusive.

As visitors swarm in, I’ve noticed two different kinds: Players who want to participate in social events or buy goods, and folks who want to point and look and make jokes about all the fucking. It’s been strange to see guests with lore-inspired names join in storylines all while some other guest named “Hrothgar Bait” bursts down the door asking where the e-blowjobs are at.

Most of the outsiders’ prodding has been in good fun, but there’s definitely a kind of voyeuristic quality to some of the visits. That’s a shame because I think we have way more to offer than cheap goods and dick jokes. 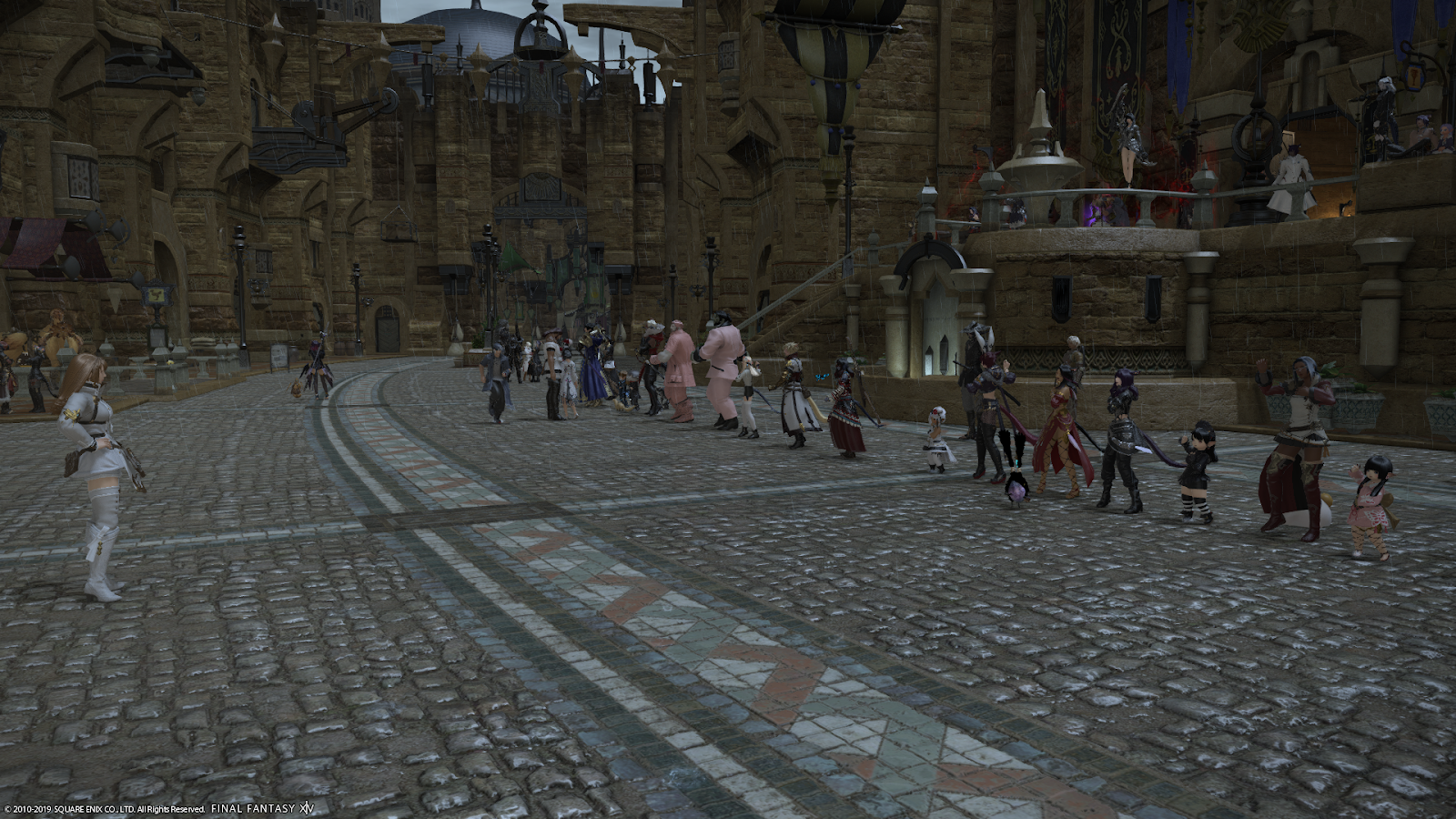 City streets have been full of new faces, and even some impromptu dancing.

I don’t want it to sound like I’m complaining, though. Balmung’s bubble needed some deflating. Shaking things up is good! The server was so populated that transfers weren’t possible, and even established players were unable to make new characters.

The fresh influx of visitors and new characters brings a ton of storytelling opportunities, and it’s turned already packed cities into the most exciting kind of hubs. It also shakes up markets in a way that should ultimately be good for everyone. Houses are available for purchase, crafters are turning big profits, roleplayers are making new friends and embarking on fresh adventures.

There’s a little discomfort and strangeness, and some annoying queue times for getting on the server, but overall, I think World Visits are working out so far. Just… maybe don’t buy all of our potions, OK?