Hundreds of PAX East attendees crowded around a small stage in the expo hall last Saturday afternoon to see if Seth, one of the top-ranked Smash players in Chicago, could keep his team alive in Nintendo’s North America Open against his opponent Poltergust.

As both players deployed deadly items and Final Smash attacks, the hall blew up with shock and cheers until Poltergust eventually edged Seth out. The crowd erupted in applause, but for many diehard Smash fans, this wasn’t the tournament they’d wanted to see.

The event drew such a large crowd that some gave up on trying to watch from the show floor and instead walked up to the sky bridge overlooking the stage and watched through the glass walls. A few attendees had brought camping chairs. Others sat on the ground with their legs crossed, some of them playing Smash Bros. Ultimate on their Switches during the tournament’s commercial breaks.

Almost all of them seemed confused by the setup. Smash Balls? Assist Trophies? Team battles? I overhead a few people mocking the rules, but they stayed and watched nonetheless, “Ohhh-ing” and “Ahh-ing” with everyone else. One of the vocal non-believers still screamed “That was savage!” in awe every 30 seconds.

Nintendo announced its North America Open tournament on January 22. At first, fans were excited. Then, they read the actual rules, and the news became the latest flashpoint in the Smash community’s ongoing debate over how its competitive scene should grow and evolve.

Many had been waiting for a long time to see Nintendo take a more active role in shaping and supporting competitive Smash, but the North America Open, the first Smash Ultimate tournament hosted by Nintendo since the game released, wasn’t what some had had in mind.

Rather than gaining entry into the finals by performing in local events, players had to compete for spots through a series of online qualifiers. The PAX East finals had an unusual format, too. Instead of matches being one-on-one, the finals would feature four teams of three players, each team representing a region of the US.

These teams would compete in a series of Squad Strike battles in which each side would go into a match with roster of three fighters at one life each. Most blasphemous of all (at least, for hardcore competitive Smash fans), the matches would have items and Smash Balls turned on, which could potentially provide some players with big advantages if they were simply enough to scoop up a powerful item or ultimate attack before their opponent.

Fans voiced their surprise and confusion in the comments under the Nintendo Versus Twitter account’s announcement of the tournament, as well as on a thread sharing the news posted on the Smash Bros. subreddit. “This is a joke, right?” wrote one person on Twitter.

“Do they not know the tournament standard?” wrote another on Reddit. Others were more open to the ruleset, seeing it as a way to appeal to a broader audience and even finding the prospect of Squad Strike grand finals enticing, but many still took issue with Nintendo’s approach.

“Items are fun. Final smashes are fun. Differing formats offer unique experiences,” wrote a player on Twitter. “But given how long [Nintendo] has ignored our community, it hurts when they won’t use the ruleset widely agreed to be the most competitive.”

DTFaux was one of the players to come up through this system. A 28-year-old based in Virginia, he’s played Smash Bros. for two decades now, but had never been to a tournament on the scale of the North America Open until now. He almost didn’t make it, too, failing to enter the first round of the qualifiers due to an administrative error and then losing in the finals of the second wave. On his third try, however, he managed to go all the way and win a spot on the Northeast team.

“I would say—personally, I can’t speak for anyone else—there’s room in the community to allow all different types of tournaments, even if it’s not the usual kind that the majority of the community might like,” DTFaux told Kotaku during a phone interview. “It gives multiple people a chance to shine.”

Though DTFaux has participated in a dozen or so local tournaments, he said he was never an aspiring pro player, just someone in love with the game in all of its forms. In a way, he’s the ideal sort of player for a hybrid event like the North America Open, offering a bridge between a rarified scene dominated by top-tier players and the game as every passionate but casual fan has experienced it in their own home.

Smash players have spent decades analysing, debating, and refining the competitive rulesets used for most premier tournaments in order to try and remove randomness from the equation. Smash Balls and items are seen as anathema to that, as well as certain stages that strongly favour some fighters over others.

In some pivotal moments, Saturday’s tournament showed why. In the first round of the bracket, Northeast played Northwest on Gerudo Valley, a stage where it’s easy to knock opponents off the sides of the screen.

Early on, a player named Mystic was fortunate enough to pick up a Gust Bellows item. This allowed him to simply blow his opponent, Seth, off the stage, putting Northwest ahead in the set that would eventually end up sending Seth’s team down into the lower bracket.

D’Ron “D1″ Maingrette, a Smash Bros. Community Manager on Twitch and a longtime caster, told Kotaku at the event that it’s moments like these that make him hope Nintendo adopts more standard rulesets for at least some of its tournaments in the future. “If you really want me to be 100% real, just [use] our rule set, that’s it,” he said.

“We do so much already behind the scenes when it comes to figuring out what helps eliminate random wins. It’s not like we’re try-hards, we just want to eliminate any factors that can make someone feel robbed of a win.”

Despite making it to the North America Open grand finals with items turned on, Seth agreed that items can undermine the spirit of fair competition.

“In a lot of my matches, I felt I was unlucky because my opponent would have stage control thanks to items spawning in favour of them,” he told Kotaku in an email. “I think all my opponents were skilled, but the outcome of the sets certainly could have been different without items changing the pace of games.”

Smash Balls are another point of contention. First introduced into the series in Super Smash Bros. Brawl, a Smash Ball is a special item that spawns at random and hovers around the stage until a player manages to break it.

The player who does so then starts to glow and, after a button press, they can unleash an ultimate attack called a Final Smash. The random nature of the Smash Ball plays into the series’ party game origins and cuts against its more traditional fighting game elements.

“If there was a way to make Final Smashes where if you threw it out and got punished for it and it was super risky, so that when they actually do land, it’s insanely exciting, it would be a lot more fun,” Austylavista, a Smash Bros. esports commentator told Kotaku in an interview.

“But right now, as it stands with a lot of final smashes, people don’t have to think, they can just use B and probably get a kill.”

He contrasted that with moments in Saturday’s tournament during which talent and knowledge helped make a Final Smash deadlier than it otherwise might have been. At one point during the finals, John Numbers, a 2015 Nintendo World Champion playing for Northeast as Wii Fit Trainer, managed to blast his opponent off stage, even though his Final Smash had been launched in the opposite direction.

That’s because there’s a small range from which the attack can hit from behind, which Numbers was able to deploy to corner his opponent. The crowd exploded when they saw Numbers’ gambit was successful. His victory in that moment was both exciting to watch and, also, felt earned.

While the event didn’t seem to convince anyone that Nintendo’s ruleset was superior to the hardcore Smash community’s, it helped open up space for both to evolve.

“I think it was a fun tournament to watch, but if you’re going to talk about more serious prize pools, you don’t want people to be able to say ‘Oh, he only [won] cause of X,’ you want it to just be ‘He was the better player,’” said Richard Corey, a Smash fan who had watched the event live and talked to me on the show floor afterwards.

He and his friend, Ben Rudy, said they were used to traditional Smash tournaments, but after watching the North America Open, they both said they wouldn’t mind seeing Squad Strike tried out more in those other settings. “I don’t think it’s necessarily uncompetitive,” Corey said. “I think the team that won [today] had really good players and played really well.” 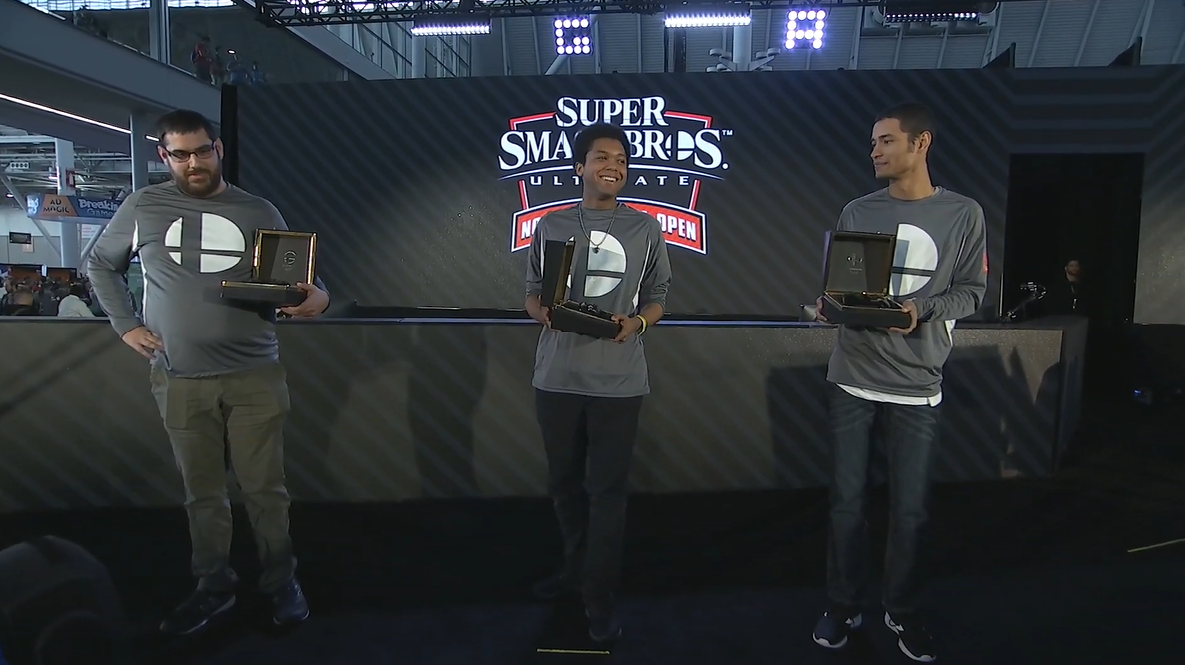 One thing they didn’t want to see ever come back were items, especially Assist Trophies. “The Assist Trophies are just so random on top of random,” said Corey [or Ben idk]. The player who gets this item never knows what AI-controlled ally they’ll be blessed with.

The Nightmare trophy, for example, causes the entire screen to go dark, which happened at one point during Saturday’s tournament and wasn’t fun for anyone, including the audience.

The Super Smash Bros. Ultimate World Championship tournament is set to take place in June in the run-up to E3. Southeast, the winners of the North America Open, will represent the US at the event, but the company hasn’t yet disclosed what the ruleset will be.

Whatever the rules end up being, players are still waiting for Nintendo to take its involvement beyond these exhibition tournaments and finally sponsor something like an official circuit, or at least a national tour — especially given the blockbuster status of the Switch and Smash Ultimate at the moment.

Even with its unusual format, the North America Open still drew some of the biggest crowds at PAX East by far. Clearly, fans want to watch high-level Smash.

“In that one trailer where they revealed the Switch, they had the stadium and all that stuff, it kind of made people dream about that and think ‘Oh, this could actually happen,’” said Nairoby “Nairo” Quezada, one of the best players to come out of the Smash Bros. Wii U era, at PAX East. “It hasn’t happened yet, but it doesn’t mean it can’t ever happen.”